Considering how much our society is supposed to love its pets, there’s a huge market for humiliating the poor “kittie-witties” and “poochie-woochies” that make up the animal version of high society. Their masters make mockeries of them with all kinds of bizarre pet accessories. The pets grimace and bear the shame—all the while clinging to the hope that their wolf or tiger relatives will heed the Call of the Wild, track down the smug little owner, and tear him into dog biscuit-sized chunks.

For the record: we’re not here to discuss pet clothing or Halloween costumes, like so many other lists out there. Our pets have to go through far more innovative humiliations than those costumes you’ve seen before; so here are ten of the most outrageous. Dogs don’t do memes, in case you’ve forgotten. They do not care that old-fashioned mustaches are awesome. They don’t even know what a mustache is! And yet here we are, contributing to the rise in Puppy Therapy because we wanted—as the inevitable photo captions say—some “lulz”.

Look at this poor pup. Look at those sad red eyes, his head hung in defeated shame. He knows he looks absolutely ridiculous, and that Master is laughing and pointing at him—and he hates it. It wouldn’t take a devil in his head to persuade him to chew that thing up, and mix it into Master’s food so he chokes on the plastic. But alas—like most revenge fantasies, this will remain a mere fantasy.

Trust me—the dog would be fine with the chew-ball part of this thing. But the pointless, non-chewy extension that forms the ‘stache? It’s purely a failed attempt at irony, forced upon an animal who probably knows more about true irony than you do. 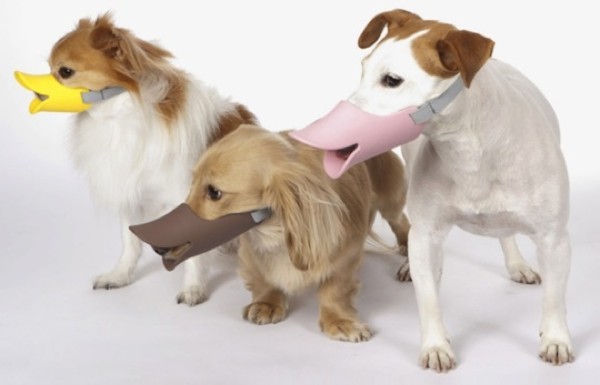 Some dogs need muzzles—I get that. You don’t want Buster tearing up shoes and pillows and young children every time you bend to tie your shoelaces—but training him properly sounds like an awful lot of work. So you just stick a Bane mask on the poor pooch, and go back to watching Honey Boo Boo Breaks Bad, or whatever the kids are into these days. This is completely understandable.

But at least Bane looks cool. What, pray tell, is the point of a duckbill muzzle? So you can glare at your dog and say “quack”? If your ultimate goal is to make your dog feel smarter than you, then mission accomplished.

And when you consider that the animal models for these things don’t look like they could tear apart a piece of paper—never mind the cushions of your Italian leather sofa—the whole thing looks even more like a case of Small Animal Bullying. Try this on a 200-pound Mastiff and let us know how it turns out. If you still have lips, that is.

If the world were just, the number of people who would want to paint their pets’ nails would be almost zero—and those who still harbored such a strange desire would possibly be confined to an asylum upon capture. Their days would be spent alternating between prettying up doggie toes, and constantly evading police manhunts.

But the world hates justice—so not only do many people still paint their dogs’ nails, but whole businesses are actually built around the idea! Yes: for a mere $81, you too can purchase up to 18 different colors with which to make your dog feel beautiful. Not that the relatively color-blind dog would know much about it. 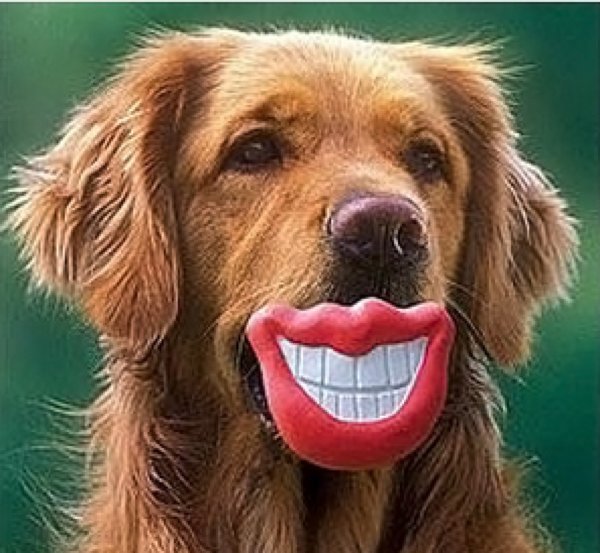 If the idea of your dog sporting a Snidely Whiplash-style mustache is too cerebral for you, perhaps Funny Teeth are more up your alley. Much like in the case of the Mustache Chew, the dog chomps on a plastic ball, which is attached to something hilarious that makes the owner squeal with delight. The lucky pup probably hasn’t heard Master laugh like that since the last time CBS aired back-to-back reruns of 2 Broke Girls.

And what’s so funny about Smile Teeth anyway? You know where else you’ll find a demonic grin like that? The Joker and his victims; a large chimpanzee about to tear you to shreds for invading his personal space; and Jack Nicholson in just about everything he’s done, ever. In short—unless you’ve trained yourself a vicious watchdog, and want to use this toy as a final warning to any would-be burglars—then you’ve just painted your dog as a psychopath for giggles. Just remember to keep an eye out for when he actually turns into one. 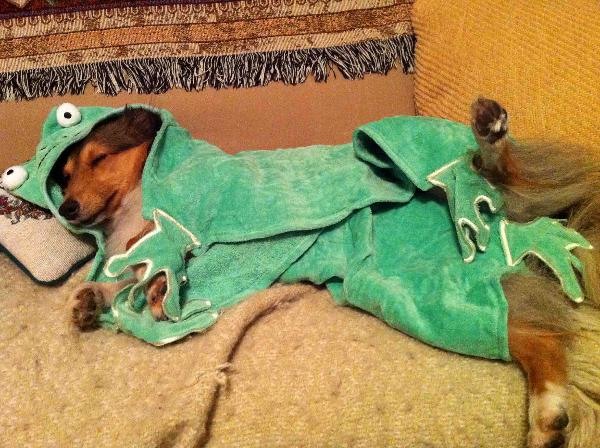 To an animal, a towel is a towel. So sticking a frog head on top won’t do anything but make it wonder why you’re suddenly laughing like a madman.

This would be bad enough provided it were merely a froggie head, used only for comic relief while you clean your dog with the towel (as towels are designed to do). But no; it’s got froggie feet too, and you can lay it out on your pup whenever he’s trying to mind his own business.

And lest you fear this product is sexist: the website makes it extremely clear that this product is “perfect for boy and girl dogs.” Good; we wouldn’t want half of our pet population to be left out of feeling ashamed of their very existence. 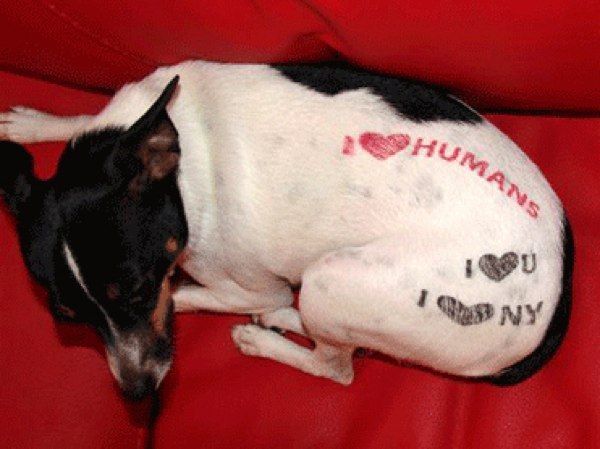 No—not real ones. Putting actual ink and needle to a pet is blatant abuse, and not at all a joke.

Temporary tattoos, on the other hand, are just plain stupid. The designers clearly didn’t have pet interests in mind. If they did, they wouldn’t have designed anything at all; they’d have made their money elsewhere by doing things like designing little smiley faces to draw on customers’ cups at Starbucks. No—this is all about the owner bragging to their neighbors that their dog likes bunnies and possibly Batman. The bunny tattoo could be ideal to troll your dog with—especially if he’s trained to chase the damn things from your yard.

The best animal tattoo of all is definitely the Cross. If you’re so into Jesus that you even want your pet to spread the Gospel, then this is the perfect opportunity. Just don’t bother to stick this one on your cat. Cats are the devil, and a cross tattoo on a devil only works if you need something combustible to start a giant bonfire with.

Don’t think by my last statement that I’ve neglected cats on this list; they’re just a lot harder to humiliate then dogs, mainly because cats don’t give the slightest batted eyelid what you think of them. But one company sure did try; you can now sit back and watch your beloved Sparkles scratch a record and wonder why everybody’s grinning at him so severely.

Obviously the joke—if you can call it that—requires your kitty to scratch nothing but the record. Problem: he’s a cat. Have you ever met a cat that only scratched what you wanted it to scratch? Of course not; such cats do not exist. Your cat would take one look at this thing, scratch it perhaps once, and then return to what it had been doing for years already: knocking things off your kitchen table. Never mind opposable thumbs; you’re lucky the cat doesn’t have an opposable middle finger. He would be using it all the time—especially if you tried to make him a DJ. 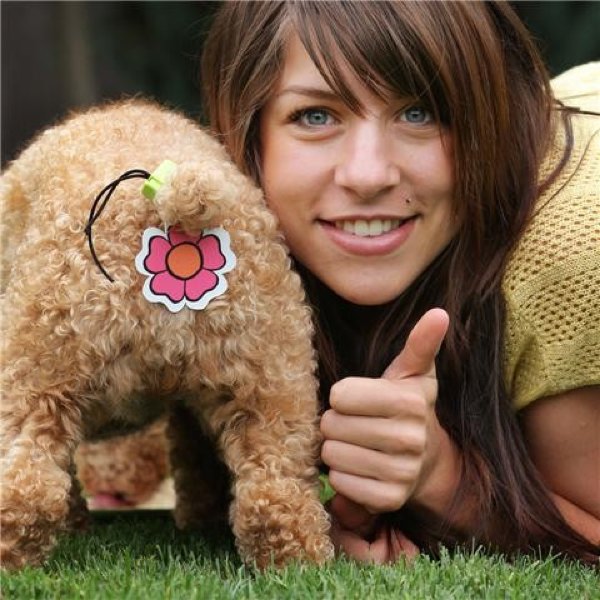 You know the worst thing when it comes to owning a pet? They never wipe themselves after a toilet run. What do they think they are, a bunch of animals? And worse yet—if you try to wipe them yourselves, they’ll squirm and resist, and then run off and poop again anyway.

What to do about this annoying act of nature? Butt covers—that’s what! For a mere five dollars, you can buy a pretty little flower to hang over your pet’s butthole, so nobody has to watch your dog bound across the beach with half-ejected grass-poo hanging from his disgustingly visible anus. 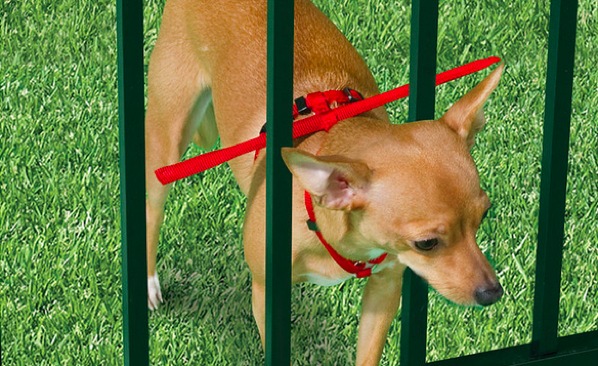 Nobody wants his pet to run away—but what if you own a small animal, and your fence has gaps in it? You could re-do the fence, but that would take precious time away from your busy schedule of making animals miserable. So instead, just slip this harness around your dog’s neck, and watch as a look of solemn gratitude slowly begins to dawn on his face.

It’s almost cartoonish in design: attach a long stick to your dog to prevent him from escaping. Of course—being a dog—he won’t get what’s going on and will keep trying to escape. And he’ll keep getting blocked. And then he will try and try again—constantly failing—while Master’s beer-guzzling buddies laugh harder and harder. 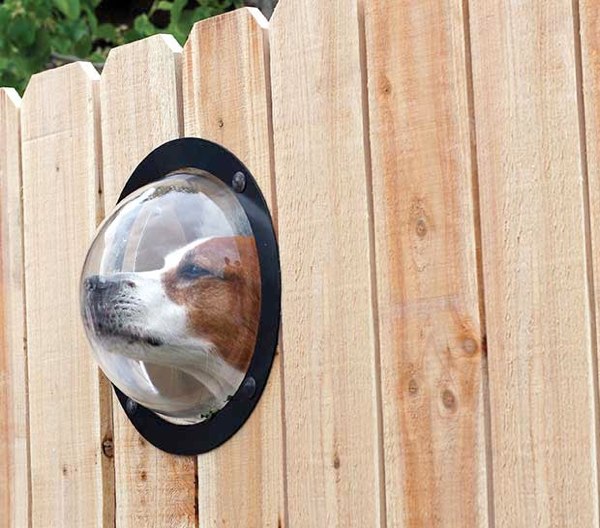 Making your dog look and feel stupid is one thing—but is it really necessary to make him feel helpless too? That is an awful thing to do, so naturally people are doing it. The Pet Peek is the latest and greatest hare-brained method of teasing and tormenting your dog. Based on the idea that dogs like to look around, this little bubble window gets installed on your fence so that your dog can stick his head in and see things. Things that he then wants to touch, lick, sniff, pee on, and explore. But he can’t, now, can he? Of course not; all you’ve given him is the chance to look at things.

Meanwhile, anyone on the other side of the fence can see this poor dog’s frantic-looking head inside the bubble window. They’ll laugh, point, and exclaim—how cute the desperate animal is! How sweet; maybe they can knock on the window too, just to see what he does. Or maybe—just maybe—he’ll finally escape to exact his revenge on all who mocked him. Now that would warrant some lulz.

Jason Iannone is a humorist and editor for hire. His Facebook is a rockin’ party, and his Twitter is the awesome afterparty. Tumblr is where he rides out the hangover, and archives anything he writes from anywhere.