Strongwomen, no less than strongmen, have long been an audience pleasing feature of circuses and carnivals, vaudeville, variety theater, fairgrounds, and music halls right up until the modern century. The 10 famous ladies of steel on this list were buff, built, solid, muscular, powerful, and talented performers … in other words, when these Amazons took the stage, it totally was our great-grandma’s gun show. 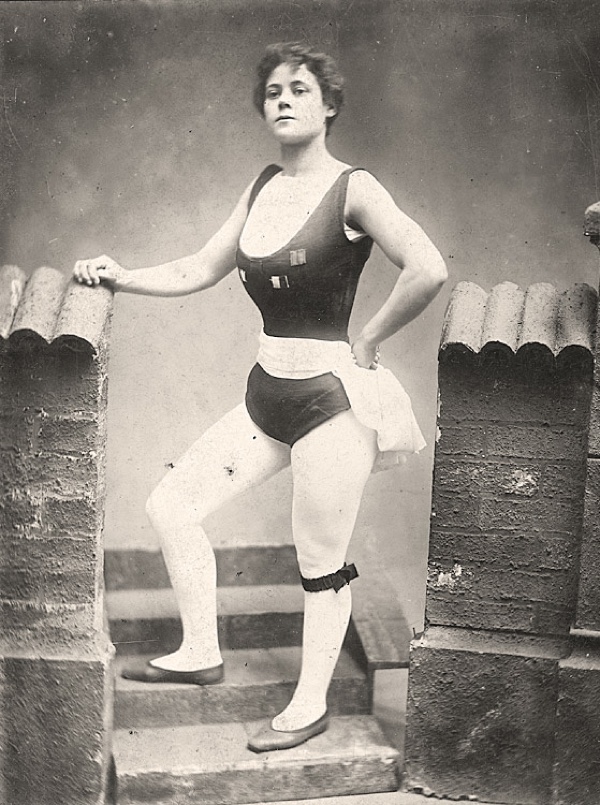 Kate Roberts née Williams, born in Wales in 1883 according to her publicity, was the first strongwoman to perform the “Tomb of Hercules” stunt, in which she positioned herself on the floor in a backbend. A heavy platform was placed on her belly, and two horses led up by a pair of attendants. The horses and men stood on the platform supported by the lovely Vulcana for several seconds. She is rumored to have pressed 124.5 pounds with one hand, and she was only 5’4” tall. Her strength so impressed the big daddy of physical culture in France, Edmond Desbonnet, that he gave her a medal. She was the lover (never legal wife) of strongman William Rogers. In their double act, they were billed as brother and sister. Why? Probably to avoid scandal since he was already married. The ruse worked. How they explained the six children that resulted from their liaison, we have no idea. 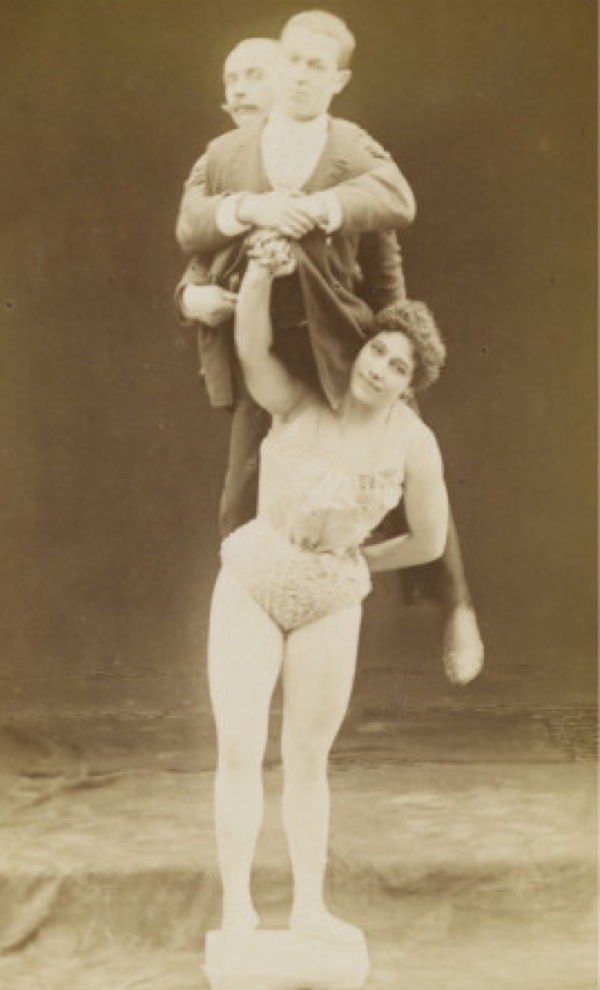 The Belgian born Athleta Van Huffelen was, like her contemporaries, a true show-woman. When her career began at age 18 in 1886, rather than simply lift standard weights on the stage, she hefted grown horses, heavy barrels, and members of the audience, and bent horseshoes and railroad spikes. A signature part of her act was waltzing with three men balanced on her shoulders. Once in front of witnesses, she lifted 204 pounds over her head one-armed, a personal record. In addition, she was a top female wrestler who competed with other women, and by the standards of the day was thought a stunning beauty. Later, the act included her daughters Anna, Brada, and Louise, who also did strength stunts. In 1908, shortly after her retirement, Athleta’s biceps still measured more than 16 inches. After their mother left the stage, the three daughters continued performing at the Folies Bergère in Paris. 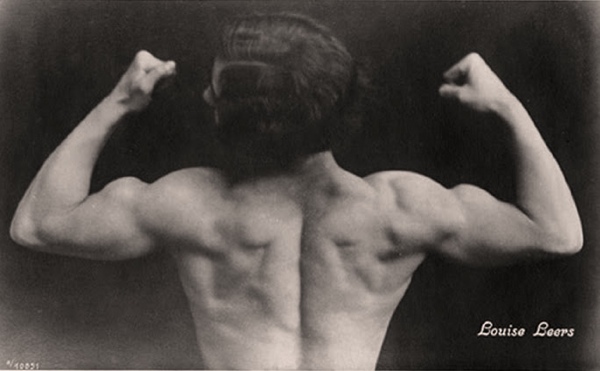 Luise Krökel, who became famous under her stage name Luisita Leers, was born in Germany. She’s included on this list because her act required enormous physical strength, and therefore she is considered a strongwomen. She began her career in the Leers-Arvello Troupe with her mother and stepfather at age 11. Her musculature and control were already developed enough to perform aerial feats of strength such as the “iron cross.” In 1926, she went solo with a trapeze act featuring such amazing displays as back rotations around the trapeze bar (her personal record was 139), the one-armed “plange,” and performing a vertical split while hanging by the back of her neck. She worked without a net and toured with the Ringling Bros. and Barnum & Bailey Circus. Her career ended around 1936 when, trapped in Nazi Germany by the outbreak of war, she was forced into retirement.

Born Laverie Valee in Sacramento, California in 1875, Charmion’s unique, vaudeville trapeze act featured strength dependent stunts that showed off her muscular physique, and a unique, somewhat naughty burlesque twist. On the trapeze, while wearing a full Edwardian era ladies outfit including hat, gloves, ankle length dress, petticoats, white underwear and black stockings, etc., she would strip off the layers, tossing her frilly undergarments to men in the crowd, until she was clad only in a form fitting leotard. One of her fans, Thomas Edison filmed this part of her act (simplified for the camera) in 1901. Theater critic George Jean Nathan credited her as the “grandmother of the striptease.” She played mostly to male crowds in the theaters of New York and London. She died in 1949 in Santa Ana, California.

Still considered a notable strongwoman in her native Estonia, Maria Loorberg—stage name Marina Lurs—was born in 1881. After training with weightlifter Adolph Andrushkevich, she took to the stage with a solo act in which she juggled 70-pound weights and did a one-handed snatch of 106 pounds. Her signature was the “live carousel” in which volunteers grasped ropes attached to a yoke which she hefted on her shoulders and spun around the stage. During a personal record attempt, she supported 13 people weighing a combined 1,900+ pounds with her legs. She toured for years in Russia, the Near East, and the Far East in a competition act with her friend, fellow strongwoman, and wrestling opponent, Anette Busch (see #3). They also wrestled local men (occasionally causing a scandal). At the peak of her career, she was considered the greatest female athlete in the Russian Empire. 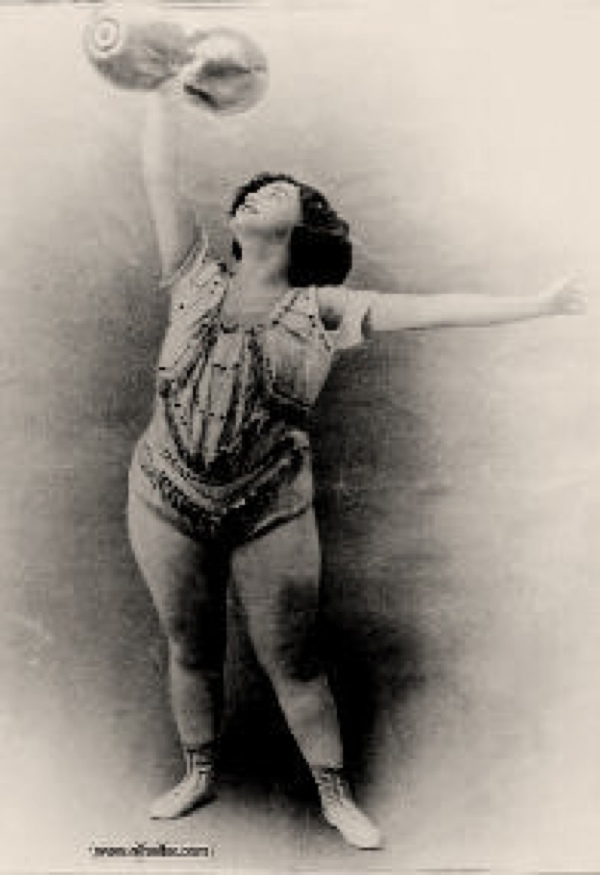 Her real name was Elise Gillaine Herbigneaux and she was born in Tongrine, Belgium in 1874. Apollina was a tomboy who enjoyed playing hard and working hard. The 5’4” woman admired strongmen, and eventually moved to Paris and trained with notable weight lifters and physical culture enthusiasts to develop her strength. Her biceps were nearly 15.5 inches. She began touring as an amateur wrestler and soon became a world champion by defeating 40 female wrestling opponents in a contest. During her stage act, she would perform a one-handed snatch of 105 pounds and other strength stunts, although her main fame lay in wrestling male challengers. While still touring, she adopted a 3-year old boy.

A native New Yorker born in 1900, Marie Ford enjoyed acrobatics, track and field sports, as well as marathons. These activities helped shape and train her body to an agility rarely seen in women of her day. While she would wrestle both female and male opponents, her love of boxing led her to use a version of the modern pankration, a combination of boxing and wrestling. She was a tactical fighter in bouts against volunteers from the audience (no professional boxers or men heavier than her weight class, please) during her North American tours. Her signature move was to soften up an opponent with body blows, lock a hold on their neck, throw them down, and pin them to the mat. While we can’t find surviving footage of Marie fighting, you can see a typical 1920s bout between female boxers above. 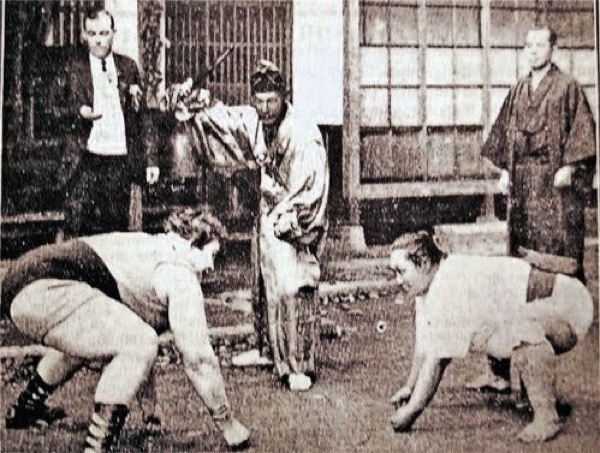 The friend of Marina Lurs (see #6), Anette was also a native Estonian and acclaimed strongwoman born in 1882. After joining a Russian circus troupe, she performed physical stunts including breaking iron chains, bending iron bars, and snapping copper coins in half. Her signature was “bull fighting” in which she took hold of a live bull by the horns and forced its head around. Her most famous stunt involved getting into the bridge position on stage. A board was placed on her body, and 10 orchestra members stood on the board, playing their instruments. Beginning in 1907, she began touring with Marina Lurs demonstrating wrestling, weight lifting, and challenging local men to matches. Later, to escape the Russian Revolution, she moved to Siberia, and then to Japan, where she lived and became interested in sumo wrestling. She fought male opponents and held status as a demigod. She died in 1969. 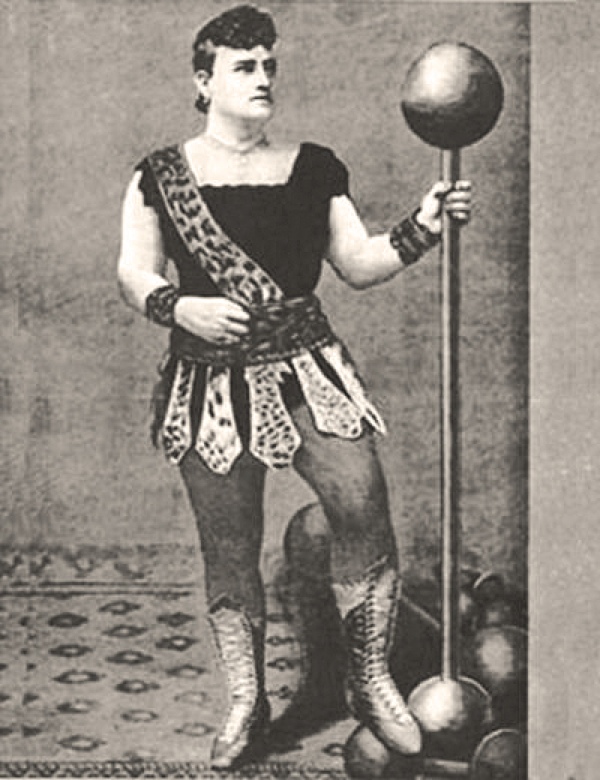 Born Josephine Blatt in Hamburg, Germany, Minerva was one of the most successful strongwomen on the entertainment circuit. Until her retirement in 1910 at age 42, she amazed audiences across Europe and America while performing in various circuses. Her strength demonstrations included breaking steel chains by expanding her chest, and catching 24-pound cannonballs fired from a close-range cannon. In 1893, she became known as the strongest woman in the world (according to the Guinness Book of World Records) when she lifted a total of 3,564 pounds at the Bijou Theater in Hoboken, NJ—a feat later disputed. If her press clippings are to be believed, she was so fond of horses, she often stopped while walking in the street to push loaded carts up a hill or pull exhausted draft horses out of the mud. 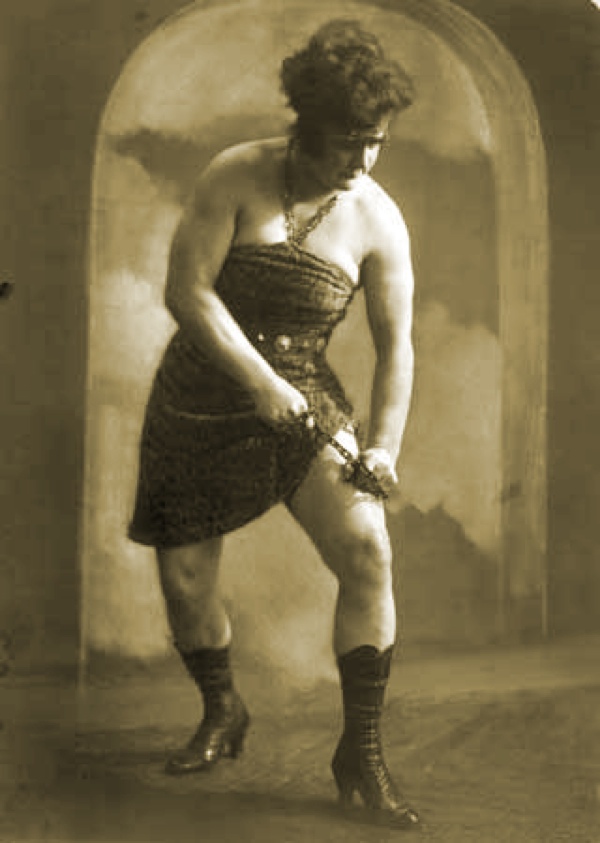 Katie Sandwina (real name Kate Brumbach) came by her astonishing strength honestly—she was born into a family of performing strength specialists in Vienna, Austria. Her stage name was in honor of Eugene Sandow of physical culture fame, who was considered to have the most perfect male body in the world. The six foot tall Sandwina had biceps measuring 17 inches. Like many strongwomen, she issued a public challenge offering to pay any man who could best her in wrestling or lifting weights. According to legend, she never lost. She lifted 165 pounds over her head with one arm and supported 14 people on her shoulders. In 1941 at the age of 57, she continued performing in the Ringling Bros. and Barnum & Bailey Circus, and could still double iron bars and break horseshoes at the age of 64. On her retirement, she and her husband opened a restaurant in New York.