You’re probably familiar with South Korea’s glow-in-the-dark cats (if not, here’s a video). They’re genetically modified cats with fluorescent pigmentation in their skin that causes them to glow red under UV light. The researchers then cloned them, successfully carrying the fluorescent gene to the next generation of kitty clones. For better or for worse, it looks like genetic engineering is here to stay, which begs the question: How will we know when we’ve gone too far? What’s the line between scientific progress and irreversibly changing the DNA of a life form?

If that sounds extreme, just check out these 10 insane cases of genetic engineering. 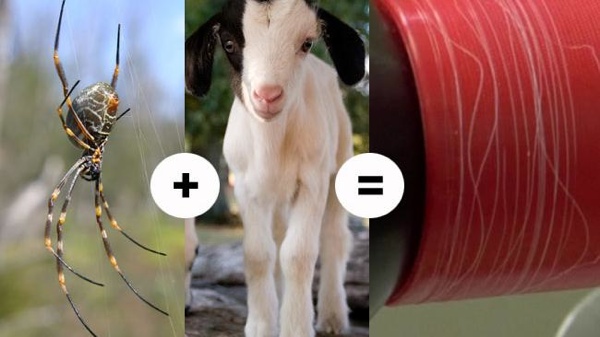 Spider silk has approximately a million and a half uses, and we’re finding more every day. Due to its incredible strength in relation to size, it’s been researched for use in bulletproof vests, artificial tendons, bandages, even computer chips and fiber optic cables for surgery. But harvesting enough silk requires tens of thousands of spiders and a lot of waiting time, not to mention the fact that spiders tend to kill other spiders in their territory, so you can’t farm them like, say, bees.

So researchers are turning to goats, the only animal in the world that could possibly improve by having more spider DNA. Professor Randy Lewis, of the University of Wyoming, has isolated the genes that produce dragline silk, the strongest type of silk spiders use when they anchor their webs (most spiders produce six different types of silk). Then he spliced the genes with the genes used by goats to produce milk, mated that goat, and confirmed that three of the seven baby goats retained the silk-producing gene.

All that’s left to do now is milk the goats and filter out the spider silk, maybe fight a little crime on the side. And Prof. Lewis isn’t immune to irony—his office is covered with Spiderman posters. 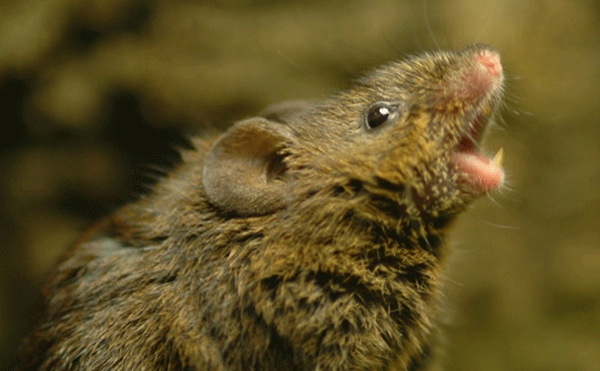 Most of the time, scientists go into an experiment with a purpose. Sometimes, however, they just throw a bunch of genes into a mouse and wait to see what happens. That’s how we got this mouse that chirps like a bird. It’s part of the Evolved Mouse Project, a Japanese research project that’s taking a brute force approach to genetic engineering—they’re modifying mice, letting them breed, and just sort of noting down the results.

While checking a new litter of mice one morning, they discovered one of the baby mice “singing like a bird.” Excited, they focused on that mouse and now have over 100 mice that can sing, and they noticed something else interesting—when regular mice grew up around singing mice, they began to use different sounds and tones, sort of like a dialect spreading through a human population. Here’s a video of one of the mice.

What will the singing mice be used for? Who knows. But the project’s goal is to artificially speed up evolution, and it seems to be taking some unexpected directions at the very least. Professor Takeshi Yagi also claims that they have a mouse with “short limbs and a tail like a dachshund.” Strange. 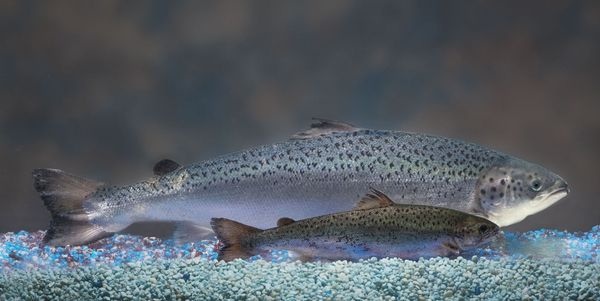 This example is probably going to appear in US supermarkets pretty soon: Genetically modified Atlantic salmon, engineered to grow twice as large and twice as fast as regular salmon. Created by AquaBounty and dubbed the “AquaAdvantage salmon,” it has two specific gene alterations: The first is a gene from Chinook salmon, which isn’t used for food as widely as the Atlantic salmon, but which grows much faster at a young age.

The second is a gene from an eelpout, a bottom-dwelling eel-like fish that continually grows all year round—salmon, on the other hand, typically only grow during the summer. The result is a perennial super-growing salmon, and it’s on the fast track to becoming the first genetically engineered animal approved for human consumption. That is to say, the FDA already gave its approval, in December 2012. 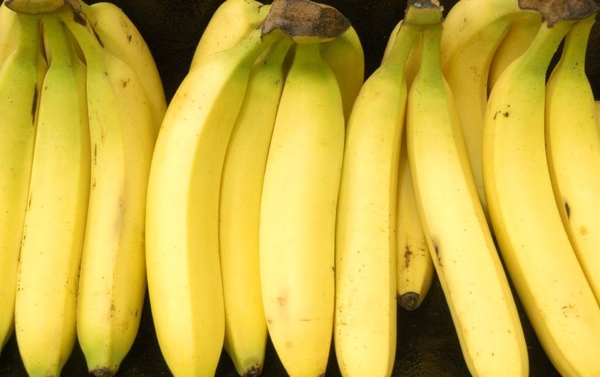 In 2007, an Indian research team published their research for creating a strain of bananas that inoculates people against Hepatitis B. The team also successfully altered carrots, lettuce, potatoes, and tobacco to carry the vaccine, but feel that bananas are the most reliable transport system.

To summarize the way vaccines work, a weakened version of the virus or germ is injected into the person. It’s not strong enough to make you sick, but it’s just enough to kick your body’s production of antibodies into effect, therefore protecting you in case the full-strength version of the virus tries to enter your system.

But there are plenty of ways vaccinations can go wrong, from allergic reactions to just plain not working. And why is it recommended that you get a flu shot every year? Because viruses adapt in response to the vaccine—which means new strains of vaccinated bananas would have to be developed continuously to keep up with the genetic arms race. And what if you don’t want the vaccine? It’s easy to not accidentally end up in a doctor’s office; it’s not so easy to avoid something in your food, especially since GMO foods aren’t required to be labeled. 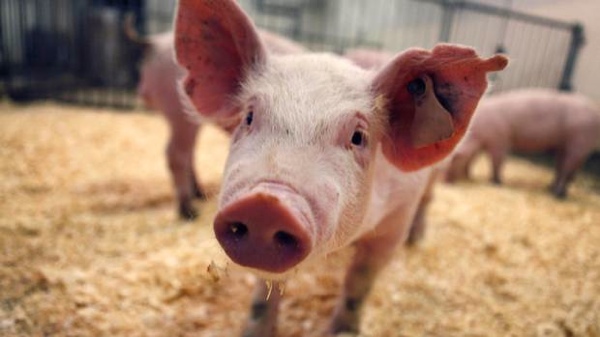 Mother Nature is kind of a jerk. First she put all our meat inside animals that can run away from us, and then she went and turned those animals into environmental pollutants. Fortunately, science is here to pick up the pieces. Enter the Enviropig, a pig genetically modified to absorb more phytic acid, which in turn reduces the amount of phosphorous waste produced by the pig.

The goal is to reduce phosphorous pollution that comes from spreading pig manure on the ground, one of the many ways hog farms deal with excess pig waste. The excess phosphorous in normal pig manure builds up in the soil and leeches into nearby water sources, which is a problem. With extra phosphorous in the water, algae will grow at an increased rate, taking all the oxygen out of the water and basically suffocating all the fish.

The project ran for 10 generations of Enviropigs, but ran out of funding in 2012. 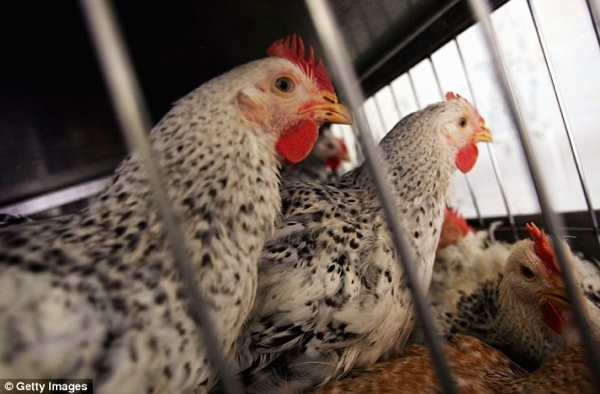 If you have cancer, you might eventually be able to cure it by eating more eggs. But not just any eggs—eggs from chickens that have been modified with human genes. British researcher Helen Sang has developed chickens infused with human DNA that contains proteins that can fight skin cancer.

When the chickens lay eggs, half of the normal protein that makes up the egg whites will instead contain the drug proteins used against cancer. Those drugs can then be isolated and given to patients. The idea is that manufacturing the drugs this way would be cheaper and more efficient, without the use of the expensive bio-reactors that are the industry standard right now.

There are many potential benefits to this system, but some people have raised the question of whether chickens used to produce drugs would be reclassified as “medical equipment” rather than “animals,” allowing them to get around animal rights laws. 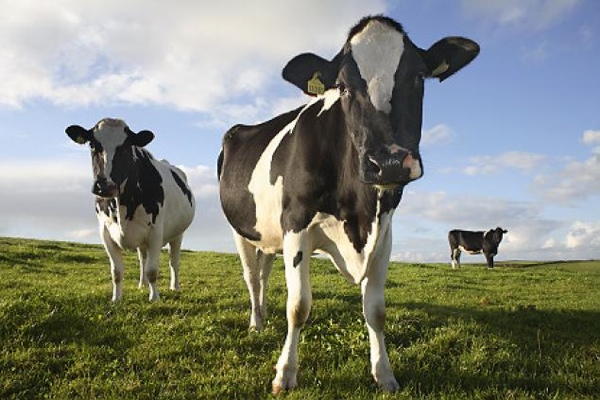 As if humanized chickens weren’t strange enough, scientists in China have already spliced human genes into more than 200 cows in an attempt to make them produce human breast milk. And it worked. According to Ning Li, who’s in charge of the research, all 200 cows are now producing milk identical to the milk produced by a lactating human mother.

Their method involved cloning human genes and mixing them with the DNA in a cow embryo. The embryo was then implanted into a female cow. Their plan is to develop a genetically modified alternative to baby formula which can be given to infants, although people are understandably concerned about the safety of giving GM breast milk to babies. 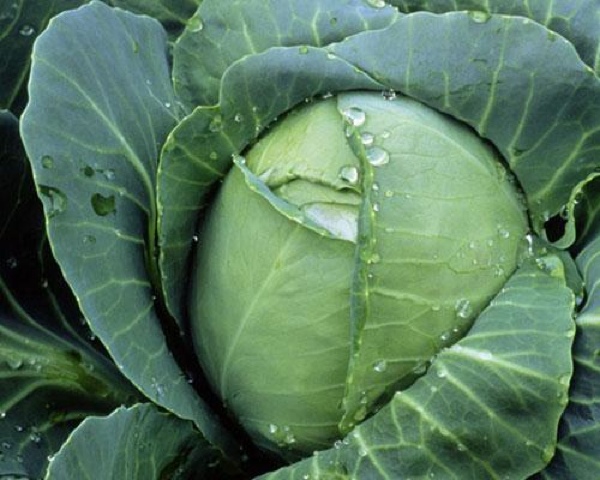 Androctonus australis is one of the most dangerous scorpions in the world. By weight, its venom is as toxic as a black mamba’s, and can cause tissue damage and hemorrhaging, not to mention the deaths of several people every year. Cabbage, on the other hand, is a vegetable that goes into soup and sauerkraut. In 2002, researchers at the College of Life Sciences in Beijing combined the two, and declared it safe for human consumption.

Specifically, they isolated a specific toxin from the scorpion’s venom and modified the cabbage’s genome so that it would produce the toxin as it grew. Why would they want to develop a poisonous cabbage? Supposedly the toxin they used, AaIT, is only effective against insects—not humans. In other words it acts as a built-in pesticide, so when something like a caterpillar tries to eat the cabbage it’s immediately paralyzed and then spasms so hard it dies from the convulsions.

What’s worrisome is that an organism’s genetic makeup changes with each successive generation. With the building blocks already in place for a highly toxic venom, how long would it take before the genes mutate into something that actually is toxic to humans? 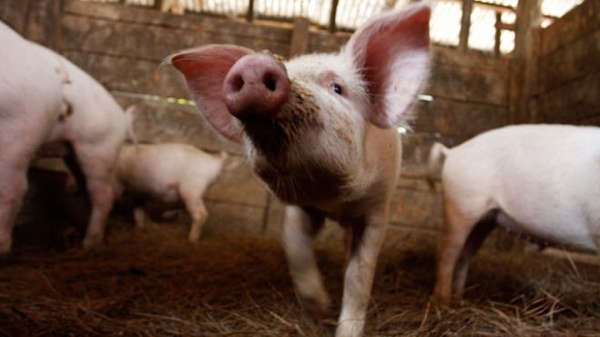 Possibly the furthest anyone has ever gone to cross human and animal genetics, several separate research teams have begun breeding pigs with organs that are suited for transplant to humans. Xenotransplantation—transplanting organs across species—has been a problem for pig-to-human transfers because of a specific enzyme that pigs have, but which is rejected by human bodies.

Randall Prather, a researcher at the University of Missouri has cloned four pigs so far that no longer have the gene that produces the enzyme. A Scottish company—the same company responsible for Dolly the sheep—was also able to successfully clone five pigs that lack the same gene.

It’s very possible that in the near future, GM pigs like this will be grown like organ factories. Another possibility is that actual human organs will be grown inside pigs instead. That research is still speculative, although a rat pancreas has already been grown inside a mouse.

The US defense company DARPA has been interested in the human genome for years, and as you might expect from the company that’s created 99 percent of the world’s deadly robots, their interest isn’t purely for educational purposes. Skirting around the Human Chimera Prohibition Act is difficult, but they seem to be experimenting with various ways to engineer a “super soldier” with their research into the human genome.

One project in their 2013 budget projection sets aside $44.5 million to develop “biological systems that cross multiple scales of biological architecture and function, from the molecular and genetic level.” The goal is to enhance the soldier’s abilities in a warzone.

But here’s another project that’s, honestly, blatantly terrifying: Their Human Assisted Neural Devices program (on page 70 of the budget, if you want to look), sets a goal to “Determine whether networks of neurons can be differentially modulated through optogenetic neural stimulation in animal models.” Optogenetics is an obscure branch of neuroscience that is used to, we kid you not, “manipulate neuronal activity and to control animal behaviour.”

And the budget goes on to specify that they hope to have a working demonstration of that technology on a “non-human primate” sometime this year, which indicates that they’re pretty far along, and definitely shows where they want to eventually go with the technology—zombie human supersoldiers.

My God, what have we done?