The ground is great because it’s there. Of all the fears and uncertainties life throws at us, one thing we can always count on is the ground being exactly where it was yesterday. So when you peek out your front window one morning and see a yawning pit where you used to have a lawn—or neighbors—it can be a bit unsettling. Well, welcome to the lives of these people. 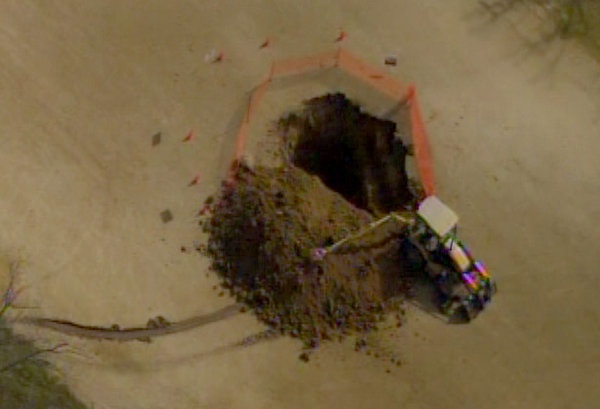 On March 8, 2013, Mark Mihal was enjoying a round of golf with some friends when a sinkhole suddenly opened up directly below him, plunging him 18 feet down into a muddy pit. Startled, his friends ran to the clubhouse to alert the manager. When they returned, Ed Magaletta, one of Mark’s golfing buddies, tied a rope to his waist and climbed down into the sinkhole to perform an impromptu rescue.

The golf course sinkhole was bell shaped, with just a small opening on the surface that widened to about 10 feet in diameter at the bottom of the hole. According to a local geologist who looked into the matter, the sinkhole was caused by limestone slowly eroding away due to groundwater. The result, as Mark can attest to, is that one moment you’re standing on what appears the be solid ground, and the next moment you’re not. The incident occurred at the Annbriar Golf Course in Waterloo, Illinois. 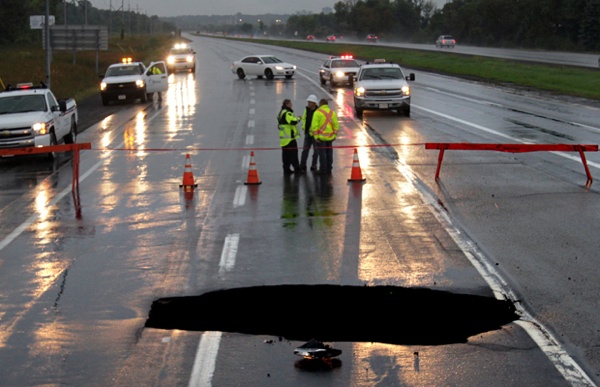 In early September, 2012, Juan Unger was on his way home from work when all of a sudden the road collapsed in front of him. With no time to stop and no room to swerve lest he crash into the other cars on the road, he took the only option left open to him—he drove straight into it.

The cause of the sinkhole was a sewer line that had burst under the Canadian highway, leaving an open space beneath the asphalt that eventually crumbled in on itself. Although the hole started small—barely large enough for Unger’s car—it quickly expanded across the highway until it was about the size of an Olympic pool. 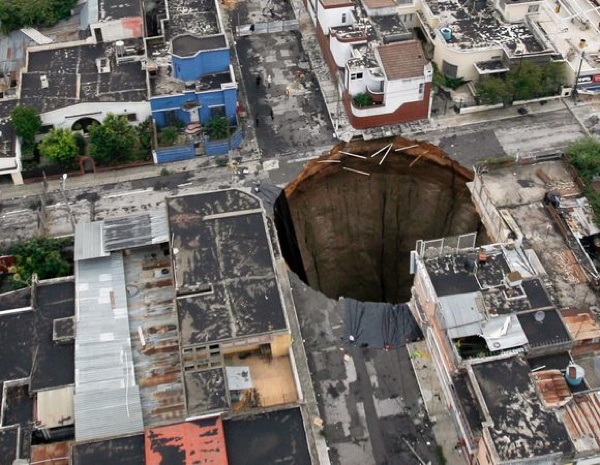 One of the most famous sinkholes of the past decade occurred in Guatemala City, Guatemala, in 2010. On May 30, an entire intersection in the middle of the city simply disintegrated and left an almost perfectly circular hole 300 feet deep and 60 feet wide, taking one of the buildings with it.

So far geologists aren’t sure what caused the Guatemala sinkhole to form, but believe it was either natural—water erosion on the limestone beneath the surface, forming an empty cavern over the years—or it was caused by a burst sewage line, which creates the same effect, just slightly faster. This is the second sinkhole in Guatemala City in three years—a similar incident happened there in 2007. 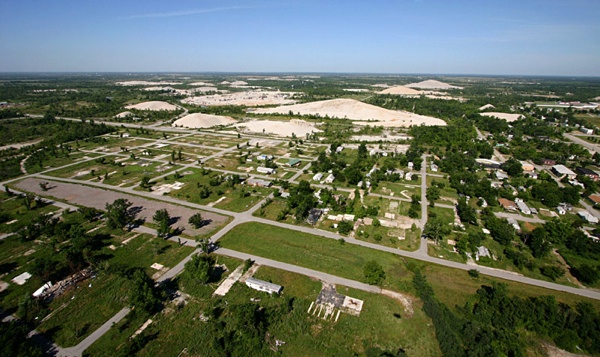 Picher, Oklahoma is one giant sinkhole waiting to happen. Actually, it’s dozens of sinkholes in the midst of happening. According to the Environmental Protection Agency, this little Oklahoma town is now the most toxic place in the country. And unsurprisingly, it’s now a ghost town (Wikipedia puts the total population at 20).

Due to extensive mining around and under the city, there have been numerous accounts of sinkholes appearing overnight as old mining shafts collapse. Even worse, some of the sinkholes experience a second life—with a vengeance. Underground water often comes bubbling up to the surface, highly acidic and rich with heavy metals from the mining waste, turning the sinkholes into toxic lakes. 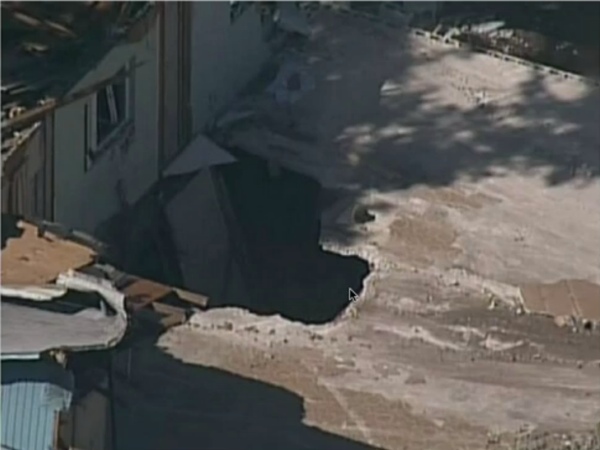 On February 28, 2013, a sinkhole appeared where Jeff Bush least expected it—in the middle of his bedroom. Hearing a crash and a yell, Jeff’s brother Jeremy ran to his room and found a 20 foot wide hole right in the middle of the house and his brother nowhere in sight. A television was still dangling through the mouth of the sinkhole, held up by its power cord, and the corner of a bed was still visible a few feet down.

According to Jeremy Bush, he jumped down into the hole to try to save his brother, and had to be pulled out when an emergency crew arrived. So far, Jeff Bush has not been found and is presumed dead. The Bushes live near the city of Tampa, Florida, an area well known for sinkholes—over 500 have been recorded in that one area since 1954, and it’s one of the only places in the country where sinkhole insurance is required for homeowners. 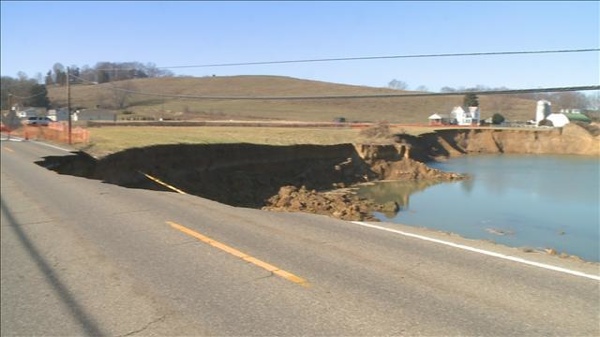 On November 29, 2012, another sinkhole opened up out of nowhere. This one was in Dover, Ohio, and had a diameter larger than four football fields (400 yards). A chunk of highway and a pond went down with the sinkhole, but officials know exactly what caused this miniature disaster—for years now a local company has been dredging sand out of the area, digging more than 50 feet down to pull it out. Combine that with the naturally sandy, unstable soil, and a sinkhole was almost inevitable. 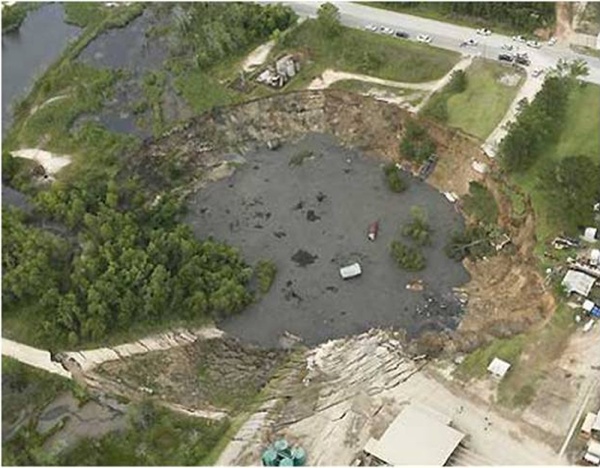 On May 7, 2008, the town of Daisetta, Texas got a little bit smaller. Early that morning 600 feet of fields, forest, and residential land sank into the ground, leaving behind a 150 foot deep crater. According to residents who watched it happen, the road began to crack and shake, and then a pit appeared that quickly grew to 20 feet in diameter. And then it kept growing, swallowing everything in its path.

Daisetta is built on top of what’s known as a salt dome—a massive underground pile of salt that, like limestone, is highly susceptible to water erosion. Eventually the dome becomes a cave, and eventually that cave becomes a hole. Now dubbed “Sinkhole de Mayo” by the Daisetta residents (although “Sudden Valley” also has a nice ring to it), the sinkhole is expected to keep growing—and if the entire salt dome collapses, it could take the whole town with it. 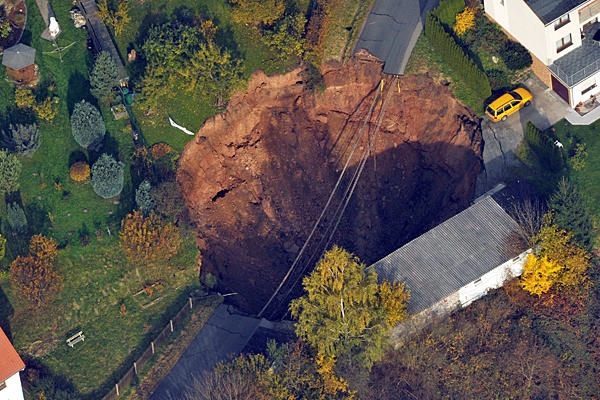 When Wolfgang Peter woke up at 3 in the morning on November 1, 2010, he thought a fleet of dump trucks was unloading gravel outside his house. As it turns out, the sound he heard was just half of his garage falling 65 feet into the bowels of the earth.

The sinkhole in question, located in Schmalkalden, Germany, opened up right in the middle of a residential neighborhood, but fortunately didn’t claim any lives—although one automobile was sent down to the crumbly depths. Officials were quick to state that the 130 foot wide crater was caused by natural causes—not mining. 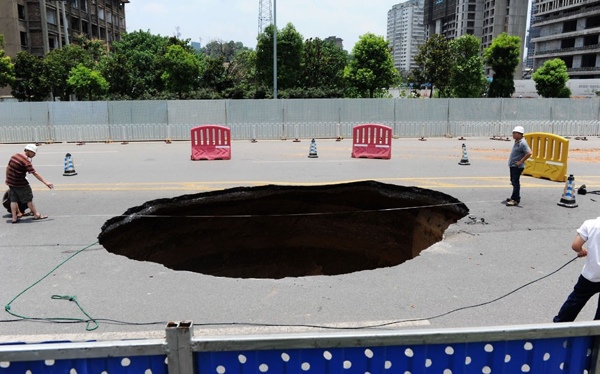 In the wee morning hours of June 7, 2012, a man was driving his van through Guilin City, China, when the road’s surface suddenly got a lot higher. A sinkhole had opened directly under his van, instantly dropping him into the shallow hole and flipping the van onto its side. He was injured, but recovered quickly.

Sinkholes occur all over the world, but they’ve been popping up more and more frequently in China lately. In a separate incident, a sinkhole appeared in the middle of a highway in Changsha, China and swallowed a BMW with three passengers, killing one of them. This pit was at least (30m) wide and was described as being too deep to “see the bottom of the pit with the naked eye. 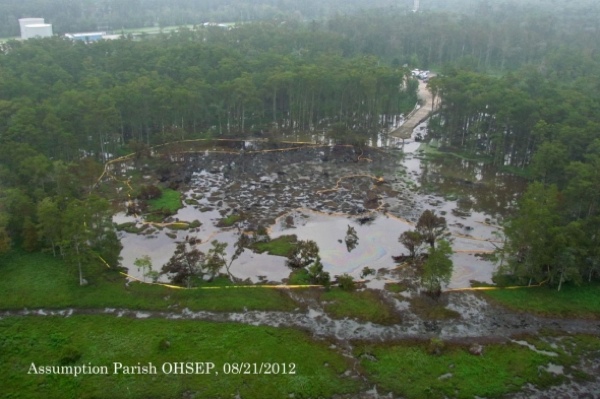 Sinkholes are bad enough, but when they’re emitting dangerous levels of radiation it becomes a different matter entirely. That was the situation on August 3, 2010, when a sinkhole appeared in the forest near Bayou Corne, Louisiana.

The 422 foot deep sinkhole was caused by the collapsing of an underground salt dome, but unlike the hole in Daisetta, Texas, this one had been hollowed out by decades of mining by the Texas Brine Co. rather than natural erosion. Literally engulfing 100 foot tall pines and already on the verge of being highly dangerous, it then turned out that this expanding sinkhole was perilously close an underground storage facility with 63 million gallons of butane gas, and then there’s the matter of methane and natural gas coming out of the ground so fast it makes the swamp look like a “boiling crawfish pot,” according to one resident.

And as the final cherry on the toxic sundae, Bruce Martin, VP of Texas Brine, then came out and said that they had maybe illegally stored some radioactive material in that area in the 90s.