Many rivers around the world naturally run beneath the ground, but others have been forced underground due to flooding, pollution, location, and diseases. Some of these rivers were dammed, covered, and diverted through concrete or brick sewage systems, and cities were built over top.

These once-thriving rivers fell victim to the concrete jungle, but some have successfully been daylighted in recent years. Many people don’t even realize that rivers are flowing beneath their cities. 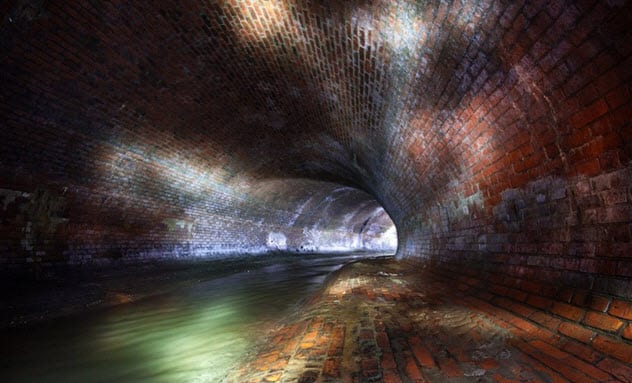 Flowing under Red Square, Alexandrovsky Sad, and the Metropol Hotel in Moscow is the Neglinnaya River, also known as Neglinka, Neglinna, and Neglimna. The natural river once flowed openly from northern Moscow to the south across the center of the city.

The river was first used as a moat around the Kremlin to help stop foreign invasions, but it was mostly unsuccessful. People living in the area began to see frequent flooding, and the Muscovites knew that something needed to be done with the river.

In 1792, they constructed a new canal parallel to the Neglinnaya River and diverted the water into the new tunnel. The old riverbed was covered by the builders. After the Fire of Moscow in 1812, the canal became so polluted that it was covered with a vault.

There have been several tunnels added, built, or expanded since the first one was constructed. The river now discharges into the Moskva River through two tunnels near Bolshoy Kamenny Bridge and Bolshoy Moskvoretsky Bridge.[1] 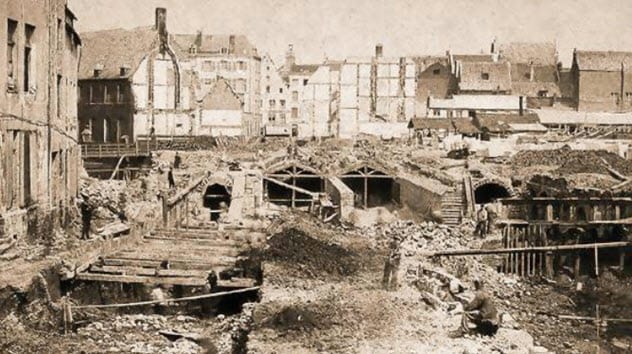 One of the defining moments in the history of Brussels was the covering of the Senne. The city was built along the Senne, and it crossed Brussels from one end to the other.

Many industries began to move into the city, and the river quickly turned into an open-air sewer that overflowed during most rains. The water became heavily polluted and produced a strong foul odor across Brussels. Constant flooding and a cholera epidemic were the main reasons for the Senne’s demise.[2]

After city officials decided that it was time to vault the river, the construction lasted only four years. The Senne was replaced by canals, and buildings were soon built over the buried river. The underground waterway was later diverted, and by 1976, the former water tunnels were converted for use by the Brussels subway system. 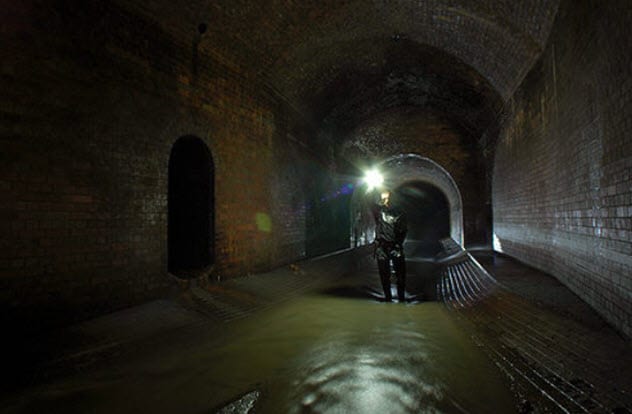 Snaking under the streets of Holborn, King’s Cross, and Camden is the River Fleet, London’s lost river. It is the largest of London’s mysterious lost subterranean rivers.

It was called the “hollow stream” by the Anglo-Saxons. Even before that, it was a major river used by the Romans. They relied on it as a major water supply because many butchers, brewers, and mills needed the water.

As the years passed, London developed into a large industrial area and the clean water started disappearing. The river was heavily polluted and began to stink.[3]

After the Great Fire of London in 1666, there was a proposal to widen the river to act as a firebreak. The idea was rejected. Instead, the River Fleet was converted into a canal, which was unpopular and unused.

It was eventually covered and incorporated into the sewer system. Locals claim that the waters can be heard flowing through Clerkenwell, and the Fleet waters can be seen discharging into the Thames on certain days. 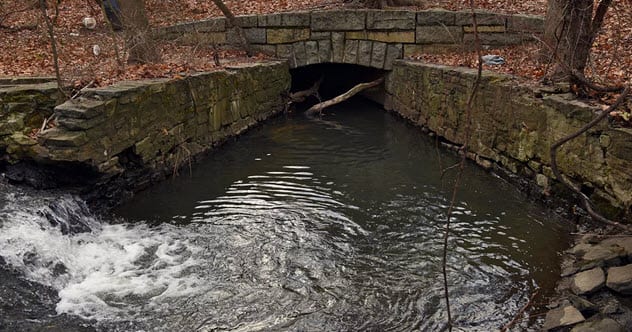 Just north of the Bronx is the beginning of Tibbetts Brook, and it flows into a small lake at Van Cortlandt Park. More of a stream than a river, the water then disappears underground and flows through a brick sewer. However, it is considered one of the underground rivers that New York City is working to daylight.

The Native Americans once inhabited this region and used the stream for water and food. They named the brook Mosholu (“smooth or small stones”) because it flowed over these types of stones.

In 1691, Jacobus Van Cortlandt dammed the portion that flowed through his property, creating the Van Cortlandt Lake. Water from the lake was used to power a gristmill and sawmill.

Years later, the city acquired the property that is now known as Van Cortlandt Park. There are currently efforts underway to daylight Tibbetts Brook. The project would help bring the stream back to the surface between the lake and Harlem River instead of having it run through a sewer.[4] 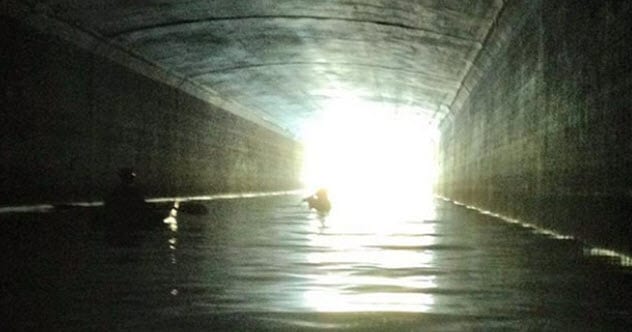 Hundreds of years ago, a river flowed through Hartford, Connecticut. We’re not talking about the Connecticut River but instead the smaller and less popular Park River.

It was first used as a source for mills and other factories, but it soon turned into an industrial and human waste dumping ground. It is also commonly known as “Hog River” because of the several farms with pigs that lined the river.

Due to the massive pollution of Park River, the local government decided to bury the river beneath the city with concrete tunnels and drainage ditches. Begun in 1940, it was one of the largest, most expensive projects ever undertaken by the Army Corps of Engineers.[5]

It took four decades and more than $100 million to complete, but the river now runs under Hartford. The upper part of Park River is exposed and open to the public, but the underground section is off-limits to visitors trying to catch a glimpse of the lost river. 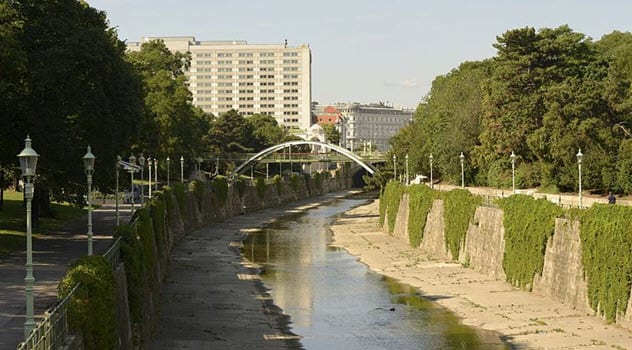 The Wien is a river in Austria that flows through the city of Vienna. After devastating floods that were often accompanied by cholera, concrete was poured to act as the riverbeds.

The water was diverted underground and is now mostly covered by the city and integrated into the sewer system. In 2013, the City of Vienna approved plans that would build three separate terraces along the river.[6]

Stadtpark, Vienna’s first public park, is located on the bank of the Wien River and features beautiful landscapes, artistic sculptures, and shady pathways. 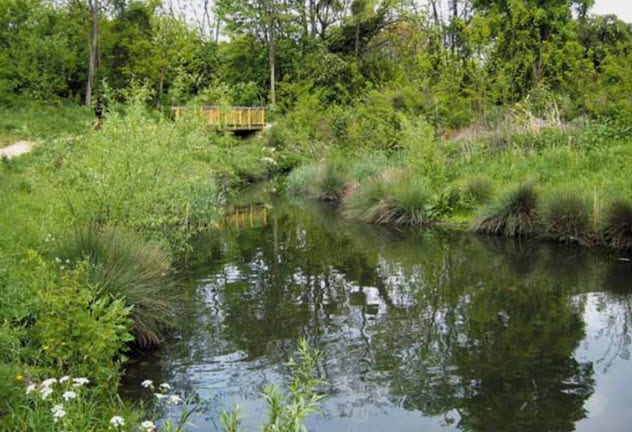 The Bievre is a 36-kilometer (22 mi) river that flows into the Seine in Paris. It has long been covered over and diverted down tunnels into the sewer system once it reaches the city.

The river once flowed into the Seine within the city, but it was later diverted to cascade into it further downriver. Several industries along the water created pollution that caused the covering and redirection of the Bievre.[7]

Restoring the Bievre has been a topic of discussion for many years, and several organizations have promoted this work. Many hope that the daylighting of the river will occur in the near future to help create a new habitat for plants and animals. They also believe that exposing the buried river will reduce flood risks and forge new “green corridors” through urban areas. 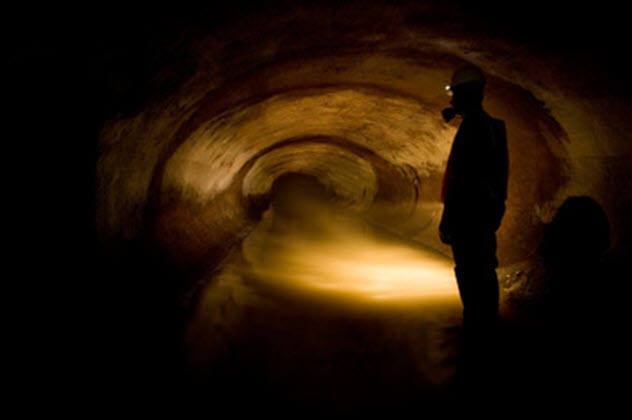 A freshwater stream flowing through Queens is known as Sunswick Creek. Scholars believe that the name may have come from a Native American word meaning “woman chief.” In the 1800s, Sunswick Creek and its marshy surroundings became polluted from sewage and industrial discharge. By 1879, the marshes were drained and the creek was either filled in or incorporated into the sewage system.

The burial process of Sunswick Creek apparently occurred in multiple phases. Urban explorers have captured several photographs of the large sewer-like pipes through which the water now flows. The creek still runs below modern streets. If you are standing near the former Somer Piano Factory building on Vernon near Socrates Sculpture Garden, you can hear the creek roaring![8] 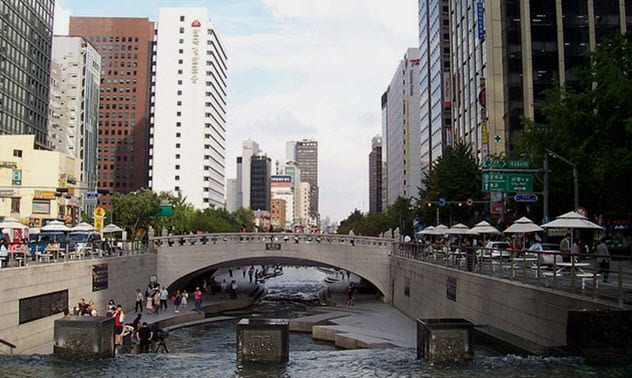 The restoration of the Cheonggyecheon proved that a green oasis can be placed inside a concrete jungle. It was once the main river flowing through Seoul, and many houses were built along the stream. Trash, waste, and other pollution eventually blanketed the waters and became an eyesore for the city. The Cheonggyecheon was then covered with concrete as an elevated highway took its place.

Around the year 2000, government leaders promised to remove the freeway and restore the Cheonggyecheon. The traffic-filled elevated freeway has now been transformed into a 5.8-kilometer-long (3.6 mi) stream corridor filled with natural beauty.[9]

The restoration project provides flood protection for up to a 200-year flood event. It also contributed to a 15.1 percent increase in bus ridership, a 3.3 percent rise in subway ridership, and a 30–50 percent surge in the price of land for properties within 50 meters (164 ft) of the restoration.

The Cheonggyecheon restoration project, which attracts 64,000 visitors daily (including about 1,400 foreign tourists), is known as one of the greatest daylightings of a river in history. 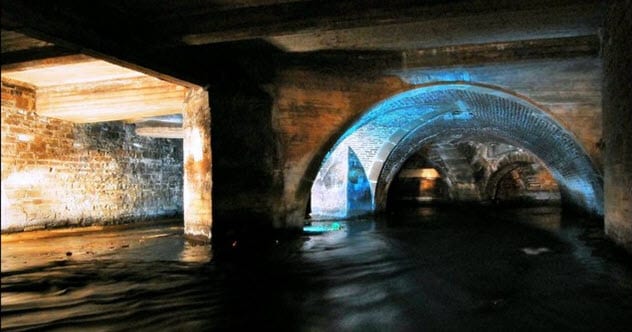 Once a clear and open river, Bradford Beck now flows through beautiful, arched foundations beneath Bradford, England. The river system was once used to power corn mills and fulling mills, and Bradford grew to be the center of the world’s wool industry.

By 1840, raw sewage and industrial discharge filled the beck. People in the area continued to drink the water and eventually saw outbreaks of typhoid and cholera. Life expectancy in Bradford was one of the lowest in the country.

By 1870, Bradford Beck was placed in a culvert and built over, hiding the river from clear view. Water quality has greatly improved since the river was forced underground, but there has been little improvement to the physical character of the river.[10]

Daylighting the beck will not be an easy task due to the many buildings under which the river runs. There are 15 plaques located across the city that mark the route of the hidden river. Each plaque carries a couplet of a poem about the river. The first plaque is located alongside Bradford Live, and the final plaque can be found across the road from the Broadway.

I’m just another bearded guy trying to write my way through life. www.MDavidScott.com

Read bizarre and frightening facts about rivers on Top 10 Dreadful And Haunting Rivers and 10 Bodies Of Water That Want You Dead.