Jupiter’s moon Europa is a cold, icy, and bright oddity in our solar system. Europa, roughly the size of Earth’s own Moon, is the smallest of Jupiter’s four Galilean moons, which can easily be seen with even the smallest of telescopes here on Earth. It is the second-closest of the Galilean moons to Jupiter after Io, which means it is bombarded with immense radiation from its massive parent planet. Europa is estimated to be 4.5 billion years old and is about 780 million kilometers (485 million mi) from the Sun. Europa orbits Jupiter every three and a half days at an average distance of about 671,000 kilometers (417,000 mi) and is tidally locked, meaning the same side of the moon always faces the gas giant. Europa is 3,100 kilometers (1,900 mi) in diameter, larger than Pluto, making it the 15th-largest body in the solar system.

Since Europa is rich with water ice, many scientists propose that it could host life, despite being incredibly cold. Also interesting is that Europa has a magnetic field, which means that something underneath its surface is conductive. Europa has long been an object of scientific curiosity for researchers on Earth. The Voyager and Galileo spacecrafts each sent back detailed images of the moon’s strange surface, and future NASA missions to study Europa are planned. In this list, we review ten amazing facts regarding this weird and out-of-this-world moon! 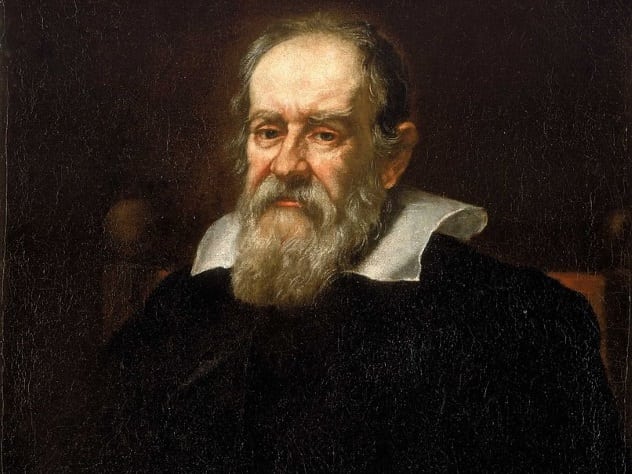 Galileo Galilei, one of the greatest early astronomers, first documented Europa on January 8, 1610.[1] Europa, along with Io, Callisto, and Ganymede, came to be known as the Galilean moons.

Using a very low-powered telescope during the 17th century, Galileo likely had trouble distinguishing between the four moons he spotted as faint points of light near Jupiter. However, while Galileo’s discovery of four new heavenly bodies is, in itself, amazing, given the era and the early technology he was using, his findings were to have a profound influence on European history for centuries to come. The discovery of Europa, along with the other three Galilean moons, proved that our Earth was not the center of the universe, thus proving that everything in the night sky did not, in fact, orbit our planet. 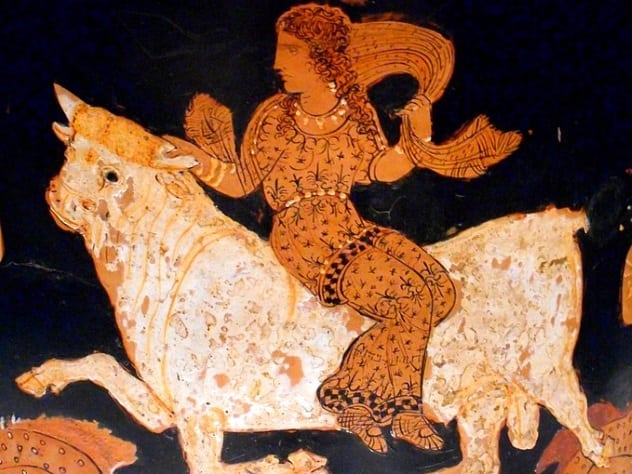 In Greek mythology, Europa is the name of a young woman who was the daughter of a king. Europa was one of Zeus’s lovers and was made the queen of the island of Crete by Zeus. Europa, in true mythological fashion, was abducted by Zeus, who took the form of a white bull.[2] After adorning the bull with flowers, Europa rode it to the island of Crete, where Zeus—the counterpart to the Roman god Jupiter—revealed his true form and seduced Europa with his power.

For centuries, the idea of giving mythological names to the Galiean moons was unpopular. (Europa has also been referred to as “Jupiter II.”) By the 20th century, however, scientists were calling the moons Europa, Io, Ganymede, and Callisto. 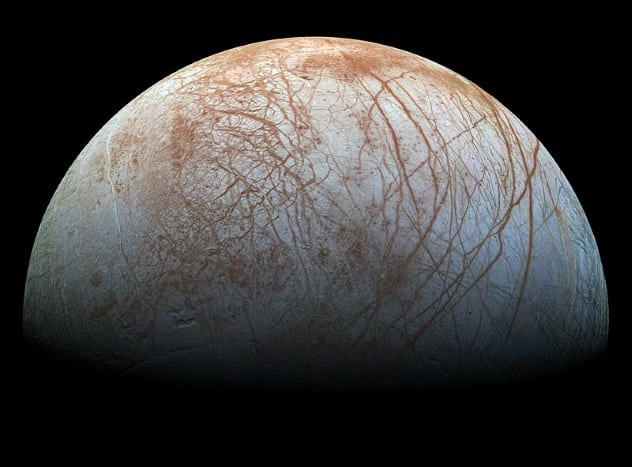 Europa’s icy surface is generally smooth, indicating that water from beneath the frigid moon’s surface seeps upward and freezes. However, there are craggy dark and bright streaks as well as a handful of craters on the surface. Pwyll, the largest crater on Europa, is one of the most obvious features on the Jovian moon. It was first observed by NASA’s Voyager probe. Pwyll is estimated to be around 18 million years old and is 25 kilometers (16 mi) across!

Other features, called lineae, are Europa’s most brilliant characteristics. Thousands of dark, streaking lineae, or “lines,” cross each other throughout Europa’s entire surface. These “lines” are deep cracks in the ice.[3] Scientific research has shown that the icy crust on both sides of the lineae are spreading away from each other. Amazingly, some of the larger of Europa’s lineae have been shown to be 20 kilometers (12 mi) across. Scientists hypothesize that the lineae are produced by waves of eruptions of warmer ice as Europa’s crust spreads, opens, and exposes the warmer layers of ice below. The cause of the warmer bulges of ice below is thought to come from the immense radiation emitted by Jupiter itself.

Other weird features of Europa’s surface include circular freckles referred to as lenticulae. These freckles are dome-like features, whereas others are pit-like, giving images from NASA spacescraft a mottled and rough landscape. The tops of these lenticulae are similar in texture to the surfaces below them, perhaps suggesting that the dome-like features were pushed up somehow. One hypothesis about the freckled landscape argues that these lenticulae were also formed by warm ice rising up through the colder ice of the outer crust, similar to magma rising below Earth’s surface. Yet another strange feature of Europa is its very high reflectivity. Its icy surface makes it one of the most reflective, or shiny, objects in the solar system! 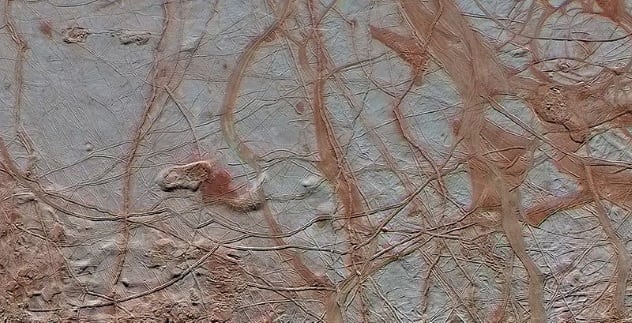 Like Earth, Europa is thought to have an iron core with a rocky mantle above and a layer of salty water. However, as mentioned, above that water, a massive layer of ice sits on the moon’s surface, giving Europa its high reflectivity. Amazingly, scientists hypothesize that Europa’s surface layer of ice could be as old as 180 million years. That is some old ice!

Aiding scientists here on Earth are the images received from NASA’s Galileo spacecraft, which provided data suggesting that Europa’s icy surface layer can be up to 100 kilometers (62 mi) thick.[4] The Galileo spacecraft made numerous flybys of Europa and also revealed strange landscapes of large pits connected to domes. What these landscapes suggest is that on Europa, the miles-thick ice surface seems to be turning over in large areas. Some scientists think the icy surface is convecting in part from heat from Europa’s much warmer core.

The Galileo spacecraft also discovered strange broken slabs of polygonal ice sheets that were often covered in a reddish material. Scientists chose to call these areas “chaos terrain,” as it is still being debated as to why these landscapes resemble huge puzzle pieces.

As if these kinds of icy landscapes were not strange and inhospitable enough, in 2011, scientists studying Galileo images suggested that these types of chaos terrain areas were places where the surface collapsed into subsurface lakes, some of which hold more water than the volume of North America’s Great Lakes only a couple of miles below the icy surface![5] 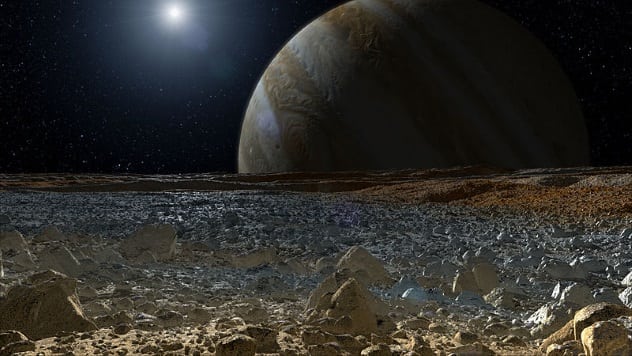 While some people might vacation on Europe’s warm, breezy, and comfortable Mediterranean coast, Jupiter’s moon Europa offers a slightly colder alternative. Europa’s bleak and icy landscape might look scary, but its temperatures are beyond frigid. 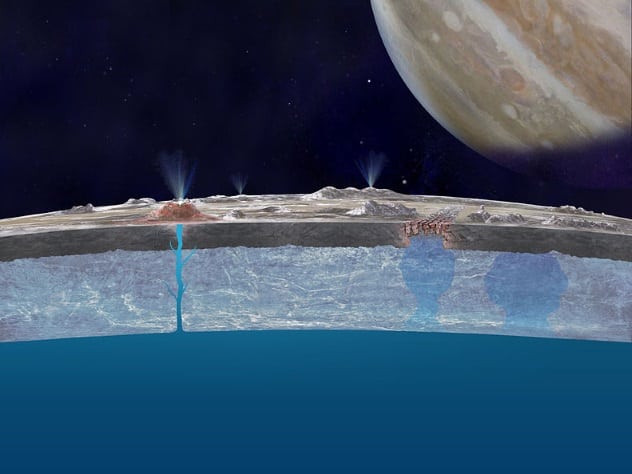 On Europa, the incredible radiation as well as the tidal forces of Jupiter’s gravity aid in heating the moon’s interior. This heating melts the ice and is believed to have produced an incredible subsurface salty ocean. This ocean theory stems from the belief that the existence of “floating” continent-sized ice sheets could not happen without some kind of viscous material below it. Therefore, the ocean acts as lubrication for the movement and constant crashing at glacier speeds of the massive surface ice layers.

Astonishingly, some scientists estimate that the total volume of water in Europa’s subsurface oceans to be around three quadrillion cubic kilometers (720 trillion mi3). That’s more than twice the volume of Earth’s oceans. On average, the subsurface Europa oceans are estimated to be around 100 kilometers (60 mi) deep![7] 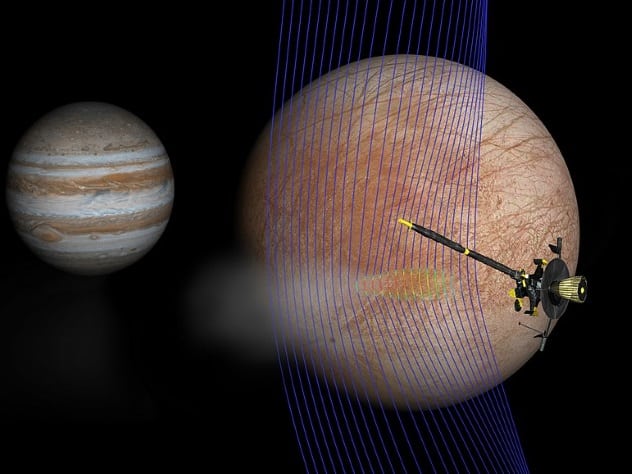 In 2018, NASA scientists announced the presence of ice geysers on Europa’s surface. This discovery came after analyses of images taken of the surface in 1997 by the Galileo spacecraft, which showed plumes of vented water vapor above Europa’s surface. The geysers gush warmer water from the subsurface ocean below.

Europa is not the only moon in our solar system where ice geysers exist. One of Saturn’s moons, Enceladus, has also been shown to have large-scale ice geysers. When Galileo photographed Europa’s ice geysers, it accidentally caught glimpse of them as it passed 200 kilometers (124 mi) above the surface and through a plume.[8] 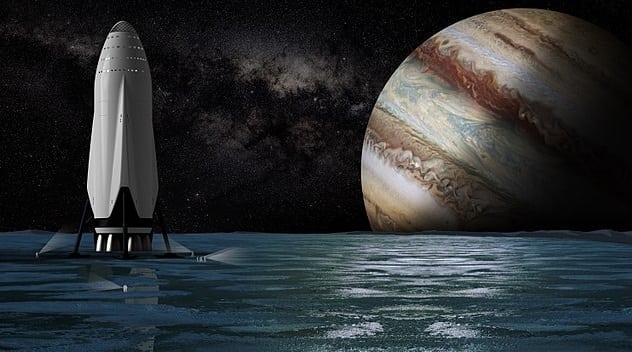 Like the other Galilean moons orbiting Jupiter, Europa receives an intense dose of radiation from its parent planet. Solar radiation combined with energetic particles from Jupiter’s powerful magnetic field deliver a deadly dose of radiation to the moon’s surface of about 5,400 millisieverts (mSv) per day.[9]

To give some comparison, an ordinary medical CT scan produces only six to 20 millisieverts. Suffice to say, you wouldn’t want to be on the surface of Europa without some serious protection. 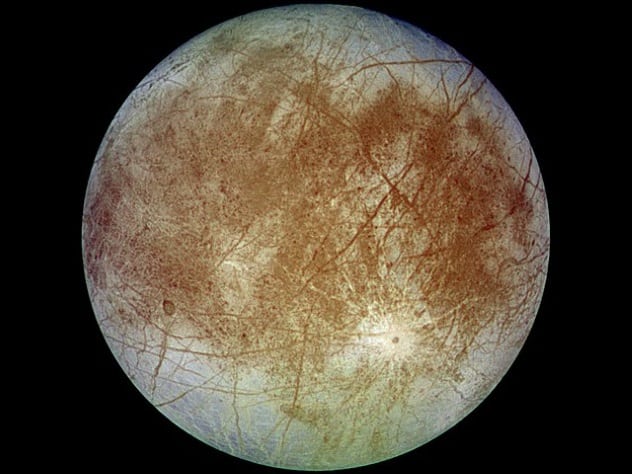 In the search for life in our solar system, Europa is among the most exciting places. The presence of vast water oceans beneath Europa’s frozen surface has scientists believing in the possibility of life below.[10] It is thought that at the bottom of Europa’s icy depths, warm geothermal vents exist, from which warm water bubbles upward. These thermal vents would be a possible location for life to evolve, just like how many odd types of deep sea creatures reside at the bottom of Earth’s oceans.

It is thought that Europa produces ten times more oxygen than hydrogen in its oceans, which is similar to Earth. Therefore, chemical reactions from hydrothermal vents and the abundance of oxygen in the water makes Europa one of the top candidates for finding life in our solar system!

Read about more amazing natural satellites on 10 Facts About Moons That Just Might Blow Your Mind and 10 Moons Humans Could Colonize.