This shocking list is the sequel to the popular list 10 Terrifying Killer Fish. While that list explored the lesser known terrors of the deep including man-eating European Catfish and Giant Gars, this new list takes the fear factor to an entirely new level with even stranger and more terrifying killers. Dangers of the most unexpected, yet worst kind lurk in the lakes, rivers and coastlines across this watery planet. Prepare to never again enter the water as we look at the 23 foot long Giant Sawfish, Vampire Characins, Snakehead and the horrific Pacu. 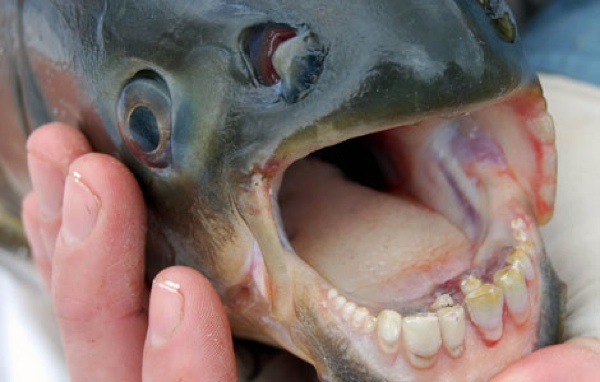 We are familiar with the horror stories of shark attacks, but there are far more terrifying and bizarre ways to be killed by a fish. The Pacu is a three foot, 55 pound fish with a horrifying set of strangely human like teeth that may be put to truly horrifying uses. Pacu originally prowled the waters of the Amazon, but have now shown up in North America and Asia after being introduced for sport fishing. In 1994, two New Guinean fishermen were killed in two separate attacks when a mysterious creature in the lake bit off their most vulnerable anatomy, causing them to bleed to death. The attacks prompted the world famous extreme angler Jeremy Wade, to travel to the lake to catch the culprits, which he identified as giant killer Pacu. This is certainly the creepiest fish in existence. 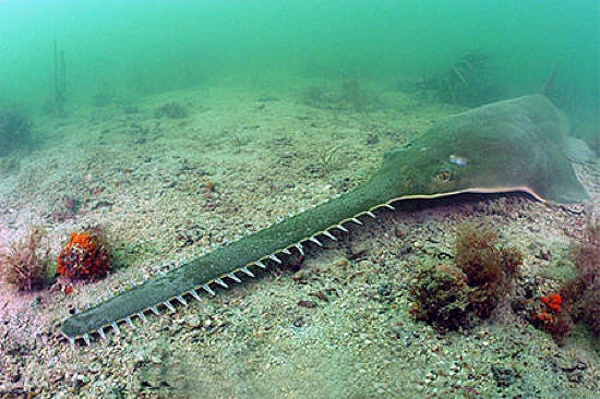 When we fear the attacks of deadly killer fish, we imagine being bitten, swallowed or dragged to the depths. However, the Giant Sawfish is capable of reducing a human intruder to minced meat in an entirely different manner. Growing up to 23 feet in length, the Giant Sawfish is armed with an enormous saw measuring over 8 feet in length, studded with enormous cutting blades. Sawfish do not deliberately hunt humans according to current knowledge, but the combination of extremely poor eyesight and strong territorial defenses are a deadly combination to humans. Intruders are treated in the same manner as prey and may be slashed apart by the enormous saw blade. Even worse, sawfish may remain invisible until it is too late. The largest sawfish species may appear in rivers as well as lakes, adding a dimension of unimaginable terror. Unfortunately, human interference has led to this dinosaur age sea monster becoming threatened with extinction. 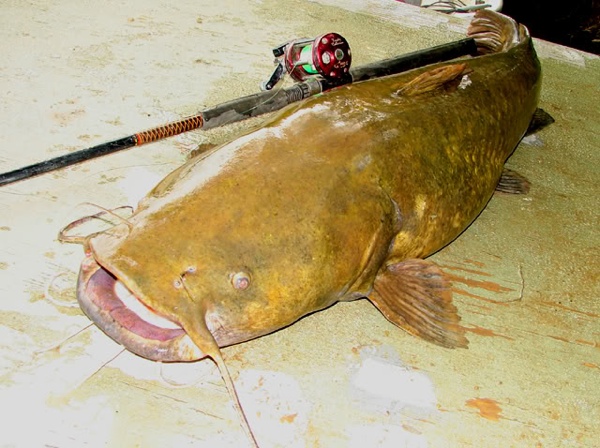 Reaching lengths over 5 feet and weighing up to 120 pounds, the Flathead Catfish is North America’s largest catfish, and a fearsome predator capable of taking on other fish, mammals and waterbirds. The Flathead lurks in dark crevices in the Missouri river and other major water ways across the continent, and bursts forward with lightning speed to capture prey in its rubber-like grip. If one of these giant fish were to seize a human foot, persuading it to let go could prove highly difficult. Aggressive Flathead Catfish may plausibly be considered as a culprit behind the unexplained drownings of swimmers and fisherman in American waters. Even more disturbing is the fact that fish may continue to grow throughout much of their lives, meaning larger, potentially man eating specimens may exist. 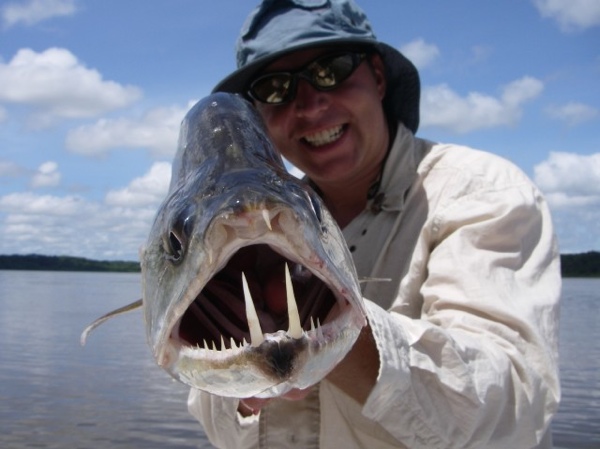 There are creatures on this Earth so horrific that they strain the boundaries of human imagination. The Payara is so unearthly and shocking that it might be explained as Count Dracula in fish form, or an aquatic sabre toothed tiger. Growing up to 4 feet in length and weighing up to 30 pounds, the little known Payara or “Vampire Characin” possesses fangs up to 6 inches in length which it sinks into aquatic animals in ferocious lunging attacks, sensing the location of internal organs as it precisely drives in the fangs. Humans swimming in the Amazon River could potentially be stabbed through the heart or suffer a collapsed lung in a Payara attack. Payara are becoming popular sport fish, partially due to the danger presented by the unimaginable fangs, and were nicknamed “Cannibal Piranha” due to their habit of preying on closely related Piranha. 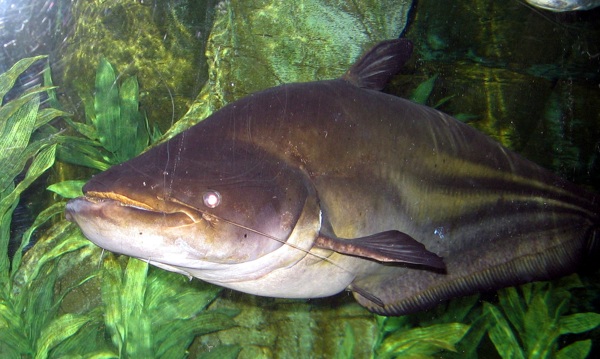 The Wallago Attu is a fish straight from a nightmare. Inhabiting the waterways of Southern Asia, India and Afghanistan, this “Shark Catfish” is an 8 foot long stalk and lunge predator with a mouth filled with massive, recurved teeth. With its extremely sleek body and powerful fins, the Wallago lunges from the shadows of rivers and lake shores and consumes whatever prey happens to be close by. The Wallago Attu has become greatly feared by villagers due to its reputation for consuming children who venture close to the water. Due to the ferocious, predatory nature and incredible speed of this monster catfish, Wallago Attu have become known by the alternative name “Lake Shark”. 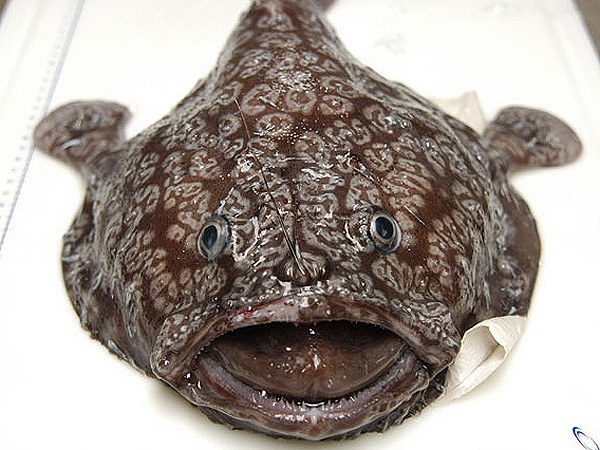 Possessing a truly ghastly appearance, the monstrous Atlantic Goosefish grows up to 6 feet in length and weighs over 70 pounds. Lying camouflaged among the rocks, goosefish lunge forward to seize prey in their cavernous, tooth lined mouth set in jaws capable of engulfing a football. A swimmer would have great difficulty escaping the grasp of a Goosefish, but the real danger lies in the potential to be swallowed. Goose Fish have a stomach nearly the size of their body. Three foot individuals have been found with prey items only several inches shorter than their body length. Specimens only slightly larger than the six foot monsters found to date may be capable of simply swallowing a human who ventures too close. 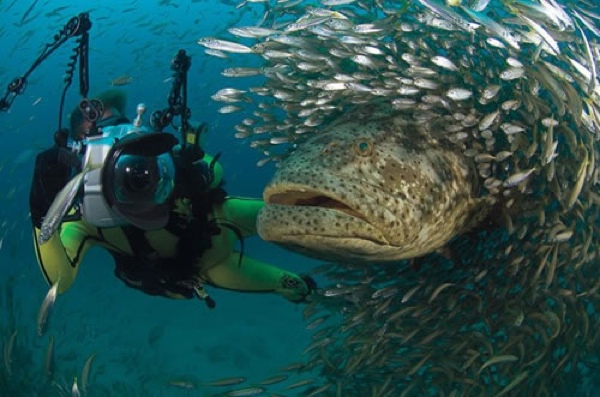 While many of the fish on this list are bizarre in some way, the Goliath Grouper inspires terror merely by its huge size and voracious ability to swallow almost anything it desires. Weighing up to 1,000 pounds, possessing an enormous round mouth and measuring up to an incredible 16 feet in length, this aggressive, giant relative of Bass and Cichlids has no problem preying on humans. In several cases, divers have been stalked and charged by the gigantic fish, and one diver reportedly found himself in the mouth of the sea monster before he burst through its enormous gill opening. Apart from the Great White Shark and Giant Catfish, the Goliath Grouper is the most capable of any fish on this planet of simply eating a human in a few gulps. 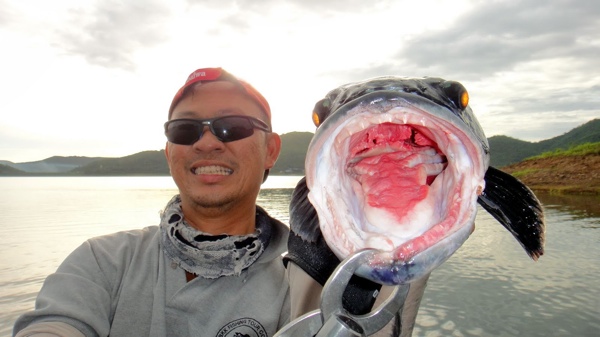 The Giant Snakehead has drawn attention worldwide following its introduction into temperate waters, sparking fear of a dangerous plague. Growing up to 4 feet in length and weighing up to 50 pounds, Giant Snakeheads are ferocious predators capable of destroying almost any medium sized animal they encounter. Armed with razor sharp teeth and extremely muscle bound bodies, Giant Snakeheads have caused serious injuries to rice paddy workers, swimmers and fishermen who invade the fish’s territory. Aggression is most extreme when the parents are protecting their young. Ferocious ramming and biting attacks have resulted in drownings, while attempts to capture the fish have proved fatal to anglers who were badly bitten and speared by their fishing rods when the aggressive fish turned to ram them. Tragically, children have reportedly been killed in predatory attacks by these “demonic” creatures. 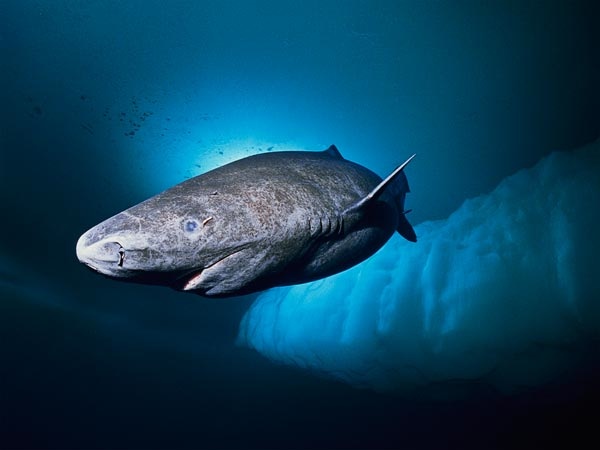 We normally imagine shark infested waters as tropical locations, and enjoy a sense of relative safety in the temperate waters of the North. However, even diving in arctic waters is no guarantee you will avoid a shark attack. The Greenland Shark grows to over 20 feet in length, and feeds as a stalk and lunge predator. In one case, this giant of the North was found with a young polar bear in its stomach, and others contained Reindeer. Although recent fatalities have not occurred due to the remote locations of the habitat and the icy water, Inuit Legends refer to times when kayaker hunters were tipped out of their Kayaks and consumed by the icy predator. Although not confirmed, a human leg was reportedly found in the stomach of a Greenland Shark in 1859 in Canada. We feel that the existence of such a creature is sufficient to destroy any sense of safety, wherever there is water. 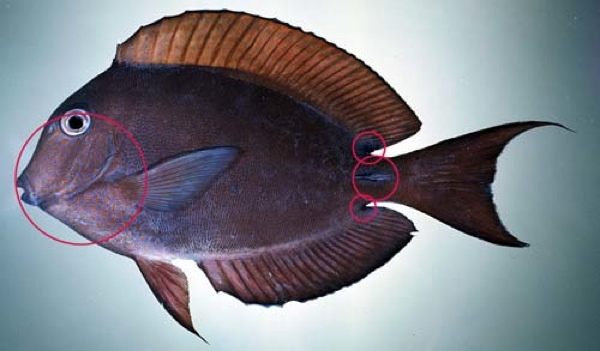 The roughly 100 species of Surgeon Fish inhabit shallow coral reefs worldwide, and some types are among the most beautiful tropical fish. However, a diver would be well advised to steer clear of these two foot beauties. For concealed in their tail is a naturally evolved switchblade, which the surgeonfish will not hesitate to use as it “operates” on intruders into its territory. A human who foolishly reaches for the fish or invades its section of the coral reef may suddenly be slashed by the blades, leading to amputation, or severing of tendons or arteries. The blood loss could possibly be fatal to the unfortunate swimmer in of itself, but even worse, the wounds could attract an even more deadly reef shark.

David J. Wesley is an extreme naturalist dedicated to sharing the terrifying and unexpected dangers of the natural world. His list 10 Terrifying Killer Fish inspired some fearful internet discussions.