I have always believed that if ghosts were to exist, it was less likely that they were sentient beings and more likely “psychic scars”, spiritual residue left on a place long after its inhabitants had passed. If that is indeed the case, there are few places in the world that have absorbed as much emotion as hotels. They see the unbridled joy of honeymoon couples and families on vacation. The workaday despair of businessmen living out of suitcases. Druggies and prostitutes and schizophrenic geniuses, murders, suicides, heart attacks, arguments, trysts, a revolving cast of thousands playing out their own individual drama each night. If any place on earth is likely to be haunted, it’s a hotel. Below are ten of the world’s spookiest. 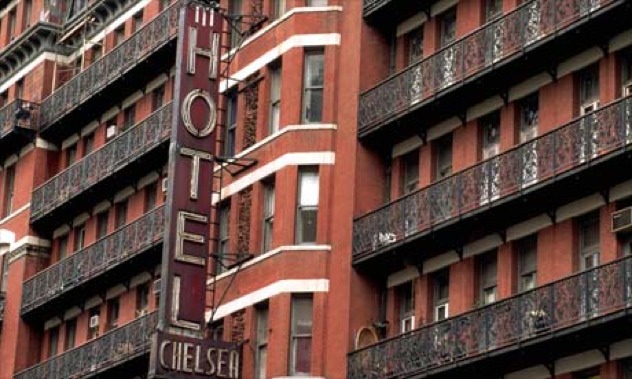 A bohemian landmark the Hotel Chelsea was built between 1883 and 1885. Although it was the home of countless artists, authors, poets, and musicians, it is perhaps best known as the place where Sex Pistols bassist Sid Vicious stabbed girlfriend Nancy Spungen to death—Vicious himself died of a heroin overdose before the case could be brought to trial. Poet Dylan Thomas was staying at the Chelsea when he fell into his fatal coma; he died later in the hospital. But it’s possible Sid Vicious and Dylan Thomas never left the Hotel Chelsea after all; their ghosts have been spotted wandering its halls, along with playwright Eugene O’Neill and novelist Thomas Wolfe. Other guests have reported all manner of paranormal phenomena, from cold air to phantom footsteps to lights that switch on and off at will. The Hotel Chelsea is currently closed to new residents while undergoing renovations. 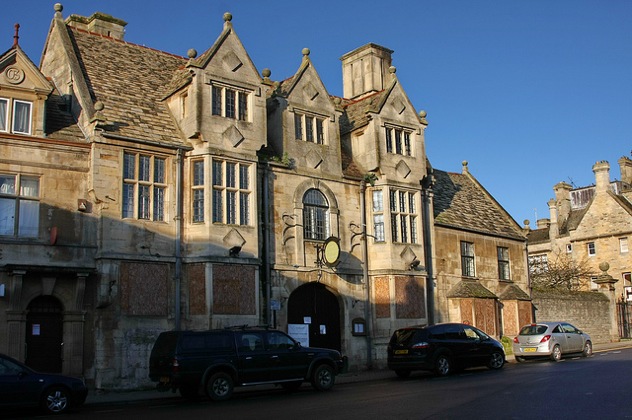 Fotheringay Castle was built circa 1100. It had a colorful history, being the birthplace of Richard III (whose remains were found last year beneath a parking lot), as well as the place where Mary Queen of Scots was tried and beheaded. By the 1600s, the castle had fallen into ruin and was razed, but not before parts of it were salvaged. Most notable was the castle’s oak staircase, which found its way into the nearby Talbot Hotel of Oundle, Northamptonshire. Legend has it that Mary walked down those very stairs on the way to her execution, leaving the mark of a crown on the wood from a ring she was wearing. Even though she has been dead for over four hundred years, Mary has not slept easy. Her ghost has been seen walking down the staircase, furniture has been moved around, and a portrait of Mary has been known to leap from the wall. 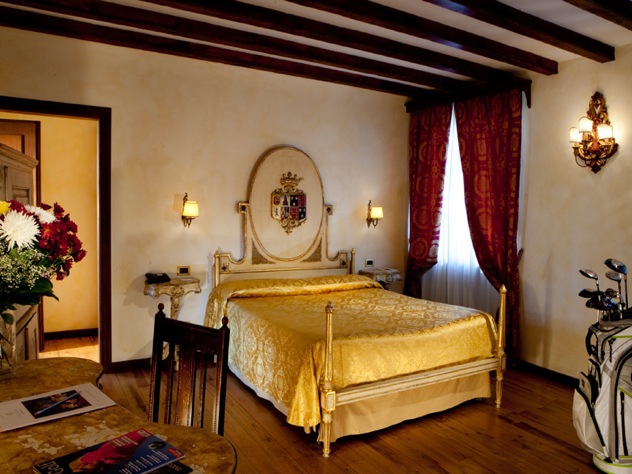 One of the most world’s most ancient cities, more blood has spilled on the soil of Rome than nearly anywhere else on earth. The Castello della Castelluccia, a renovated 11th century castle described by some guests as something out of a fairytale, has experienced its fair share of that history, changing hands many times and serving as the home to many aristocratic families, including this Orsinis, the Mutis, the Odelskanis, and operatic tenor Francesco Marconi. But this legacy has left its shadows; it is said to be haunted by three ghosts, possibly including the mad Emperor Nero who wanders through the gardens, and guests have reported seeing spectral horses passing by in the night. 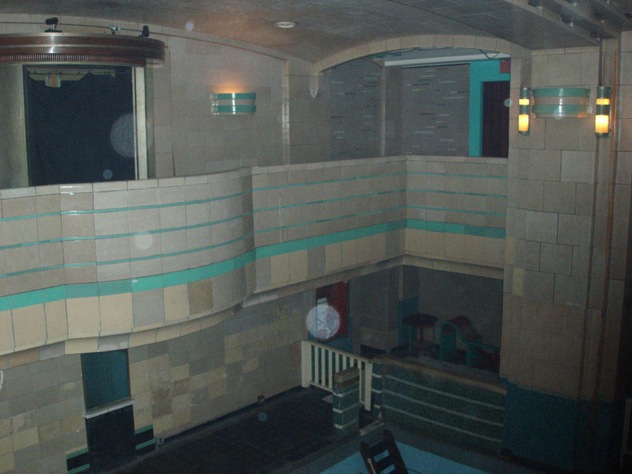 Built by the Cunard Line, The Queen Mary was the premier ocean liner for transatlantic travel, carrying celebrities and dignitaries. During World War II, it was painted gray and used as a troopship, but after the war was over, it was returned to its former grandeur. The Queen Mary was retired from service in 1967 and permanently docked in Long Beach, California, where it became a floating hotel. Dozens of people died on the ship over the years, including at least two men crushed by a door in the engine room. Spectral women in 1930s style bathing suits are often spotted around the swimming pool, telephones ring without benefit of callers, and the forlorn cries of children are heard in the night. Unlike many hotels, which downplay alleged paranormal activity, the Queen Mary embraces it’s spectral residents, offering daily ghost tours. 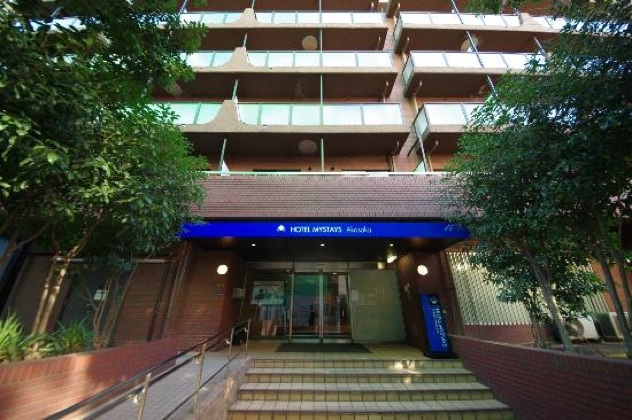 The Japanese have always been serious about their ghosts, and Tokyo has been the home of tales regarding the Noppera-b?, a terrifying spirit who appears normal until a person approaches. When it turns to acknowledge you, it exposes a white face completely blank of features. One of the most haunted places in Tokyo is rumored to be the Akasaka Weekly Mansion, an extended stay apartment where guests have reported apparitions, ghostly mists, and feeling disembodied hands touch them while sleeping. 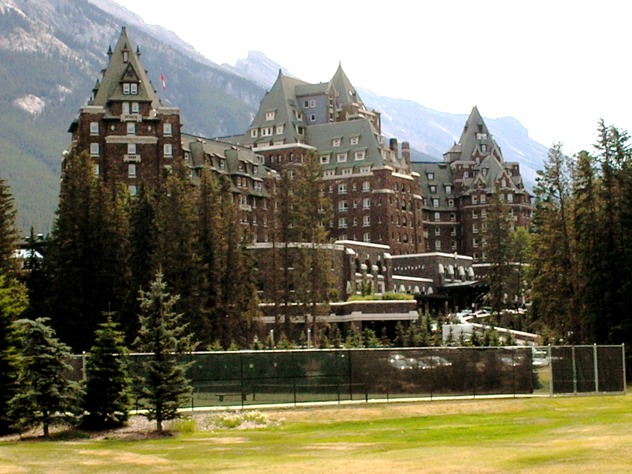 Located high in the Canadian Rockies, the Fairmont Banff Springs Hotel calls to mind a beautiful medieval castle in the wilderness. The Fairmont management adamantly denies any ghostly activity, but stories abound. One spirit frequently witnessed is that of a bride allegedly killed in a tragic accident right before walking down the aisle. The other, far more whimsical tale involves an elderly bellhop named Sam McAuley. Sam so adored the hotel that after he passed, he continued to work there. Guests report a white-haired bellhop helping them, only to vanish before they have a chance to tip him.

Australia has a rough and tumble history, with origins as a British penal colony. The Russell Hotel shares those dark origins; it served as a hospital during deadly outbreaks of smallpox and bubonic plague, and later became a rooming house and hostel for sailors. It would seem that at least one of the seamen refuses to leave. Guests of Room 8 report waking to find a dark presence looming over their bed, peering down at them. Others claim to have seen the ghosts of prostitutes wandering the hall or doors opening and closing. Some claim that recent renovations on the old sandstone building have only served to rile up the old spirits, and activity is reportedly up. 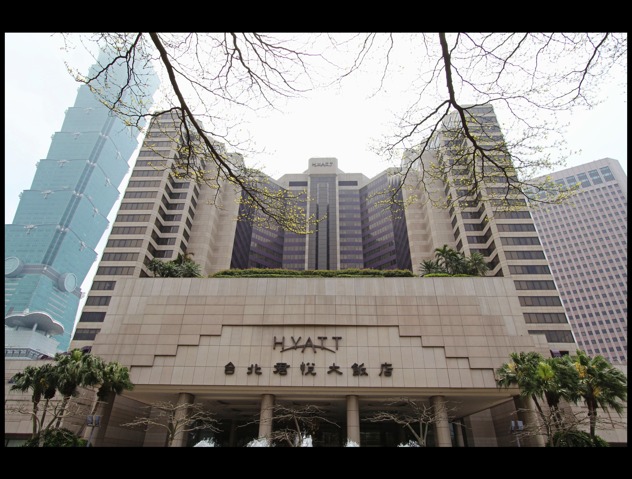 It is rumored that the Grand Hyatt was erected over land that had once served as a Japanese execution ground and prison camp during World War II. The earth was so poisoned by death and despair that paranormal experiences abounded in the modern hotel, and locals shun the place like the plague. Even action star Jackie Chan reported a creepy experience, storming out of his suite in the middle of the night after encountering a ghost. Desperate, management turned to feng shui experts, who installed wind chimes, amulets, and Buddhist scrolls in the lobby designed to frighten off spirits.

Built in 1625, Ballygally Castle might have a less than intimidating name, but it possesses quite a formidable history. It belonged to the Shaw family for many years, until finally becoming the property of Cyril Lord, a carpeting magnate who modernized and expanded the property. It was sold again, finally becoming a hotel. One of its former residents was James Shaw, husband of Lady Isobel. Poor Isobel is said to have crossed her husband somehow—some speculate that she’d been an adulteress and still others that she’d been unable to produce a male heir. Shaw had his wife imprisoned in the turret room where, starving to death, she flung herself out the window to her dorm. Lady Isobel has since proven a very active presence in the castle, appearing frequently to guests and knocking on guests’ doors at odd hours. James himself might also be present; it is rumored that he was poisoned in the castle. Another spirit, one Madame Nixon, is seen in a swirling, elegant dress. The mischievous laughter of children is also heard tinkling in the hallways. 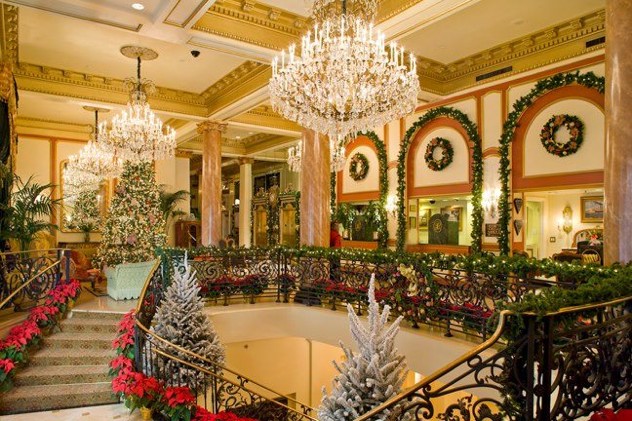 Built in 1907, the hotel’s website describes is as “A place where guests can instantly conjure the days of genteel luxury, romantic evenings and glittering nights.” Guests might also have a brush with the dead; Le Pavillon is reportedly haunted by at least five different ghosts. The most famous of these is Adda, a tearful teenage spirit killed by a runaway carriage who has been known to bump into people in the lobby, claiming to be lost, then vanishing. Adda might predate the construction of the hotel itself, witnesses claim she’s dressed in the style of the mid 1800s. A gray haired old woman in a black dress has been spotted, as have a spectral couple holding hands. Some say they can smell the man’s cigar smoke and smell the lady’s perfume. Most amusing of all is the hotel’s resident hippie—a young man with colorful garb, bell bottoms, and no shoes, who is frequently seen running around and disappearing into the walls. The hippie ghost is a prankster, often charged with hiding objects and yanking blankets off unsuspecting guests.

Mike Devlin is an aspiring novelist. He worked for years at an (occasionally creepy) Borscht Belt resort hotel in the Catskills.