As we’ve covered in the past here on Listverse, there are approximately one billion ways you could die. Nuclear winter, the robopocalypse—heck, just a simple camping trip gone wrong could leave you trapped in the merciless grip of nature’s fury, with nothing but your own wits and the questionable advice of this list to get you out alive.

SEE ALSO: 10 Psychology Tricks You Can Use To Influence People

But to quote the wise men who have walked this fair earth in ages past, questionable advice is technically better than no advice—so here are ten unusual survival tips that could end up saving your life. And as a disclaimer, don’t actually try number three. 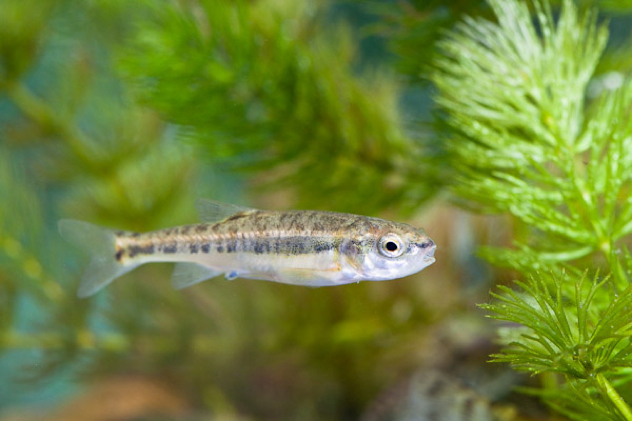 The specifics of wilderness survival change a lot depending on what part of the world you’re trapped in. Knowing how to treat hypothermia is about as useful as a bag of malaria for a castaway in the tropics, but it’s the difference between life and death when you get locked in the meat cooler at work again. But one constant in nature is that you can almost always find a body of water—and if you have the know-how, this water means food.

So what if you don’t know how to fish, or don’t have any gear? All you need is a shirt and enough saliva to spit. Spit fishing is a quick way to catch minnows and small fish, which can then either be cooked up into a crunchy goulash or used as bait to catch bigger fish. All you do is wade out into the water, lift the front of your shirt to improvise a net under the water’s surface, and spit. Minnows are attracted to the spit—they think it’s food—and when they’re clustered in front of you, jerk your shirt up out of the water. 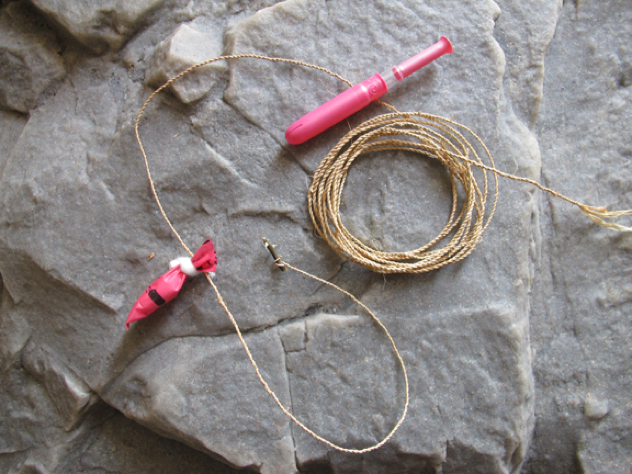 Tampons are almost as useful for surviving in the wild as condoms—and as weird as that sounds, it’s not even a little bit sarcastic. A tampon has four basic parts: a plastic tube, cotton wadding, string, and an airtight wrapper. For a quick DIY fishing bobber, open the wrapper at one end, take the tampon out, then tie the wrapper closed with a bubble of air inside.

If it doesn’t float, stuff some of the cotton into the bubble. Now you can tie your bobber to a fishing line and leave it while you take care of more important things, like scaring all those bears away from your campsite. It’s all about multitasking.

But that’s not all you can do with a tampon. The cotton makes perfect tinder for starting a fire. Stuff the cotton into the plastic tube to make a filter straw for drinking sediment-heavy water. Use the string to tie a puff of cotton to the end of a wooden skewer—and now you have a dart for your blowgun. At the very least, the absorbent cotton makes an effective bandage for cuts and scrapes. Perhaps you should make room for tampons in your survival kit. 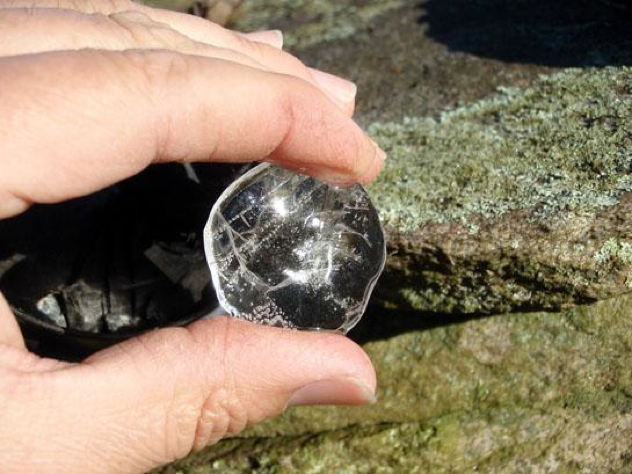 So you’re stuck in an icy wasteland and you need a way to stay warm. Maybe the weather on your camping trip took a turn for the worst; maybe your plane crashed and you’re being methodically hunted by a pack of wolves; maybe you live in Detroit—but regardless of the predicament, what you need is a fire. Fortunately, the very thing that’s killing you can save your life: ice.

An ice lens captures the sun’s light and focuses it onto one point, just like a magnifying glass. If that focal point gets hot enough, and if it’s focused on something dry and flammable, you get a flame. It’s such a simple concept, but put to work in a genius way. To form an ice lens, basically you take a chunk of ice and twist it around on the edge of a pipe. The circular pipe edge carves away the chunks and irregularities, and eventually you end up with a perfect ice sphere, which is essentially a rustic kind of Fresnel lens. 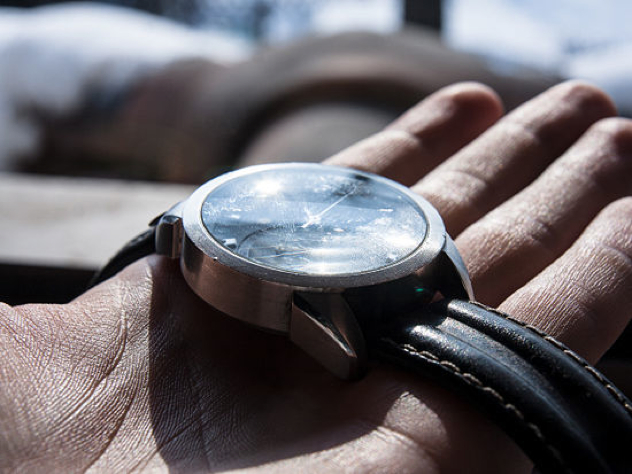 Losing your direction without a compass can be a deadly mistake, and nature is not a forgiving beast. If you’re willing to wait a whole day, you can figure out west and east by the direction of the setting sun; but without food and water, time is a luxury you might not have. That’s why getting an accurate compass bearing is crucial, and you can do it easily with a simple analog watch.

Just remember, this only works in the Northern Hemisphere; and during Daylight Savings Time you would use the 1 instead of the 12 to determine the center line. If you’re in the Southern Hemisphere, orient the 12 directly towards the sun, and the north/south line will still cut directly between the 12 and the hour hand, but north will be closest to the sun. 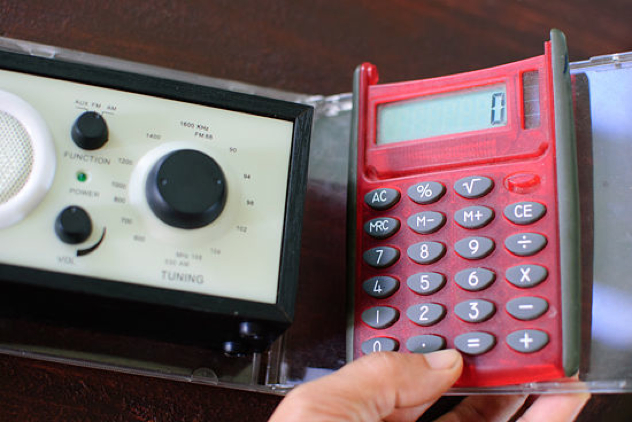 This is an awesome trick that can be used in any situation for a little fun, though it’s still helpful in a survival sense if, say, your dog buries your car keys or something. It turns out that with just a handheld radio and a pocket calculator, you can make a crude metal detector. Here’s how it works:

Set the radio to AM and tune it to a frequency that doesn’t pick up a station—the higher the frequency the better, but the only sound coming out should be static. Now turn up the radio’s volume, take the calculator in the other hand (it should be on), and angle the two so that they sort of face each other. At the right angle, the radio’s static will turn to a light buzz—you’ll hear the difference, but you might need to experiment with the angle and the distance between the calculator and radio. If you sweep this makeshift device over the ground, any metal buried relatively close to the surface will strengthen the sound of the buzz. 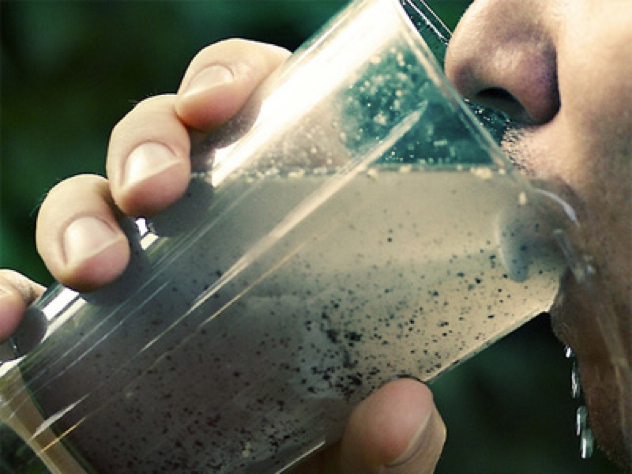 Water is always your most valuable resource; most people die from dehydration after three or four days without the stuff. Although there are cases of people lasting at least a week without water—the crew of the downed plane Lady Be Good survived walking one hundred miles (160km) across the scorching Libyan desert for eight days with no water—it’s not a good idea to tempt fate. If you’re pinched for water, you can always get it directly from the ground itself.

Enter the solar still, an easy-to-make contraption that uses a tarp or a piece of plastic to collect evaporated water from dirt. All you need to do is dig a hole in direct sunlight and drape your tarp over the opening. Secure the edges with logs, rocks, boxes of tampons—anything you have lying around. Then—and this is important—place a little pebble right in the middle of the tarp, so it pulls the plastic down into an upside-down pinnacle.

When the sun hits the tarp, the air trapped inside the hole heats up, which in turn evaporates the moisture in the dirt. As that moisture rises, it will condense on the underside of the tarp and run down to the center—the lowest point. A cup or bowl on the floor of the hole right below this point will catch the pure, distilled water as it drips down—potentially saving your life. 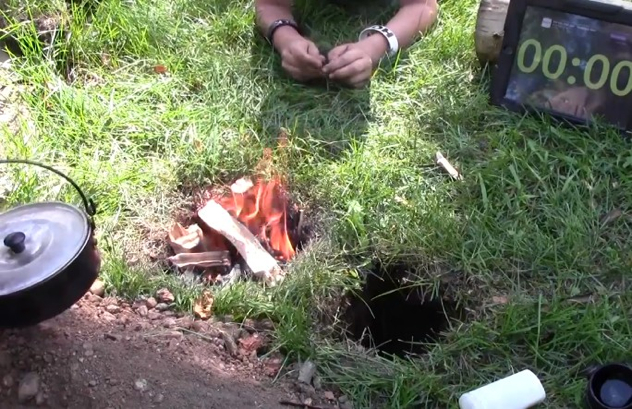 By this point you should be pretty confident that you have what it takes to survive in the wild—so let’s up the stakes. You’re not just trapped out in the wilderness, now; you’re behind enemy lines, and you have to survive without letting the enemy know where you are. Obviously a fire is out of the question—or is it? A Dakota fire hole might be just what you need.

It’s basically two pits dug side-by-side in the ground with a tunnel connecting them. The fire is in one pit, and the other pit allows air—and oxygen—to reach the fire from below via the tunnel. From a practical standpoint, this is also an ideal way to keep a fire going in very windy conditions—but you can still pretend you’re hiding out from murderous cannibals, if you want. 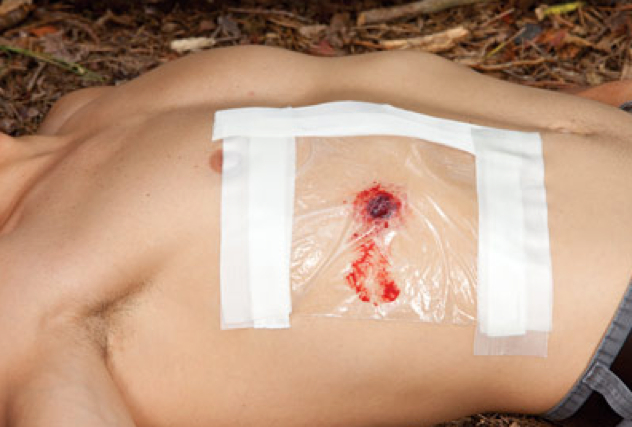 This is honestly something you should never attempt, and hopefully you’re never in a situation that would call for you to perform first aid on a lung puncture—but hey, knowledge is power. A sucking chest wound is a type of wound that penetrates through the chest wall and into the lung. Because of the extra lung hole, air can escape through the chest with a distinctive “sucking” sound (hence the name).

Needless to say, sucking chest wounds are usually fatal unless they’re treated immediately—and when you’re thousands of miles from the nearest hospital, you’d think that would be bad news.

But here’s what you can do: find a piece of plastic (saran wrap is perfect) with which you can seal the hole, so that the chest cavity around the lung doesn’t get more air pressure than the lung itself. If this happens, the lung will collapse. When you seal the hole, leave a flap at the bottom that will allow air to leave through the wound without entering it. This may seem useless now, but you never know—you might have to save someone’s life someday. 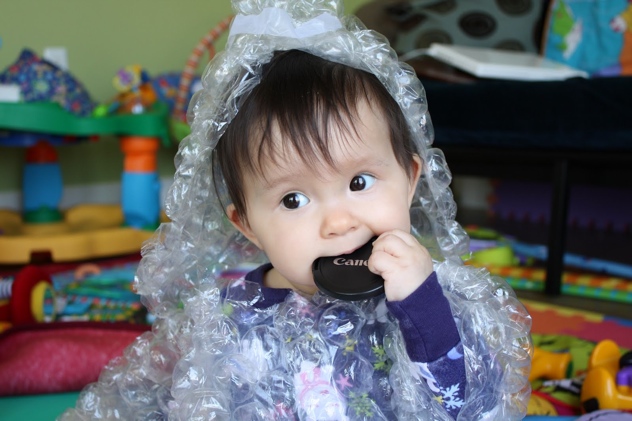 If you’re suffering from hypothermia, bubble wrap can save your life. Who would have guessed? Apparently, the air bubbles in the packing material create an insulating shield that bounces back body heat to keep a person warm. In one study, it was found that a sheet of bubble wrap was about seventy percent as effective as three cotton blankets for insulating a person—and since it’s made out of plastic, it was even more effective in the wind and rain.

So if you’re ever caught in a snowstorm with nowhere to go, reach for the bubble wrap—just try to resist the impulse to pop the bubbles if you get bored waiting to be rescued. 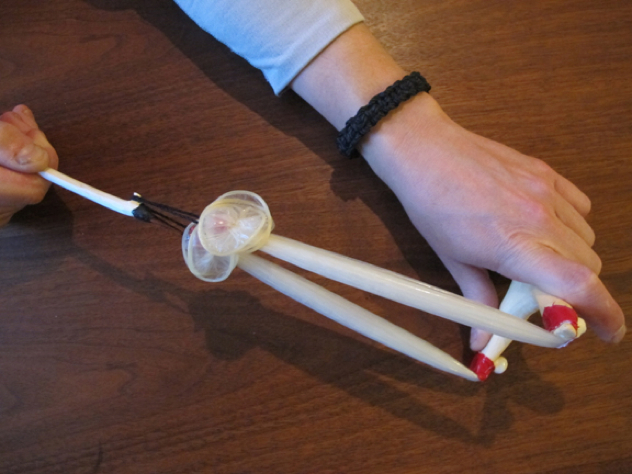 It’s an old adage: if you have enough condoms, you can survive in the wild for years. And even if we just made that up, it’s still true. Condoms can provide you with food, water, fire, and shelter—the four key elements of survival. Getting stranded with a condom shipment would be the luckiest break apart from not getting stranded at all. For starters, condoms make very decent water storage containers. You would be surprised at how big they can get—two or three full condoms will provide enough water for a person for a week.

Condoms also burn. A latex condom will light up instantly, making it perfect tinder for getting a fire going. And since they’re watertight by nature, they can also be used to safely carry dry tinder. In a pinch, you can use condoms as rope to tie up a tarpaulin for shelter or—seriously—even turn them into a slingshot to hunt small game. Yes, you can hunt wild animals with condoms.