It has been proposed that Earth has seen five mass extinction events prior to human life on this planet. A sixth extinction is occurring right now and is threatening Earth’s biodiversity. We are the cause for this sixth mass extinction event, and with it comes the loss of a wealth of species we scarcely know even exist. While many of these extinct creatures will never be documented, here are ten at risk species that we do know exist but you may not have heard of. 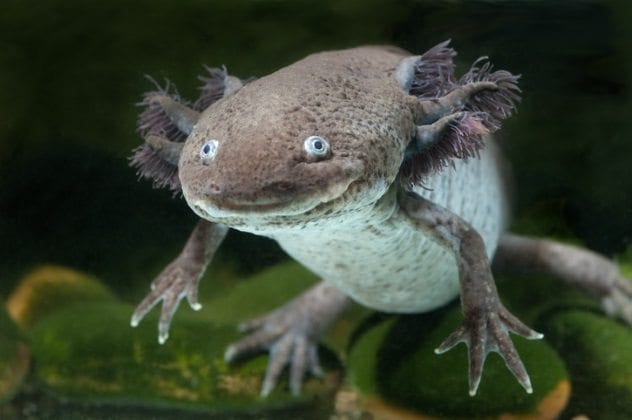 Axolotls’ adorable smiles and feathery external gills lend themselves more to a new Pokemon lineup. This native lake dweller has become critically endangered due to rapid urbanization in Mexico City and the resultant increased pollution. Though sometimes mislabeled as the Mexican walking fish, it is in fact a neotenic salamander. Neoteny, which is when animal retains its larval features throughout its lifespan, is responsible for the axolotl’s unique appearance.

It is native to only two lakes near Mexico City, Lakes Chalco and Xochimilco, though today, only Lake Xochimilco remains. Due to its decreased habitat, it is quite possibly extinct in the wild today and still exists only due to extensive research into its regenerative capabilities. Wild axolotls are often a muddy, brown color or albino, though some populations exhibit a neon pink hue. These colorful varieties have proven quite popular in the pet trade, further contributing to dwindling numbers of wild axolotls. 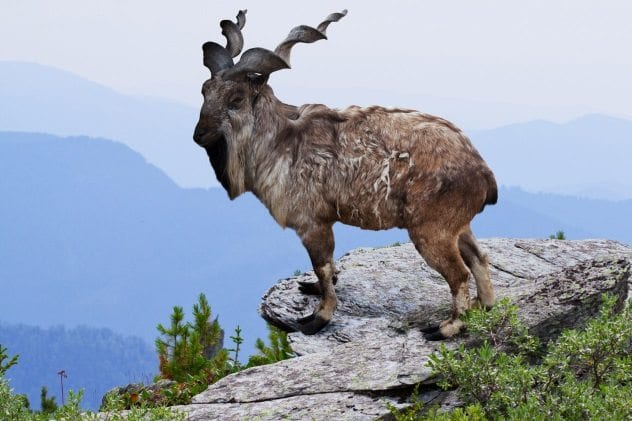 Though more resembling something that might fall out of an old Dungeons & Dragons manual, the markhor is a large goat found in Central Asia. The multiple subspecies that make up the markor family span a territory ranging from Afghanistan to the Himalayas. Like many of its wild goat brethren, it has adapted to the local mountainous terrain, moving at ease in steep, rocky conditions.

Males boast massive, corkscrew-like horns that can grow up to 1.5 meters (4.9 ft) long! These spectacular horns have proven to be a a double-edged sword for the goat, as they’ve made it a prized trophy both for hunters and the illicit animal trade market as well as a target for utilization for purported medicinal properties. Markhor fans can breathe a small sigh of relief, though, as the species has recently been upgraded by the IUCN from endangered to near threatened. Their population has increased by 20 percent over the last decade. 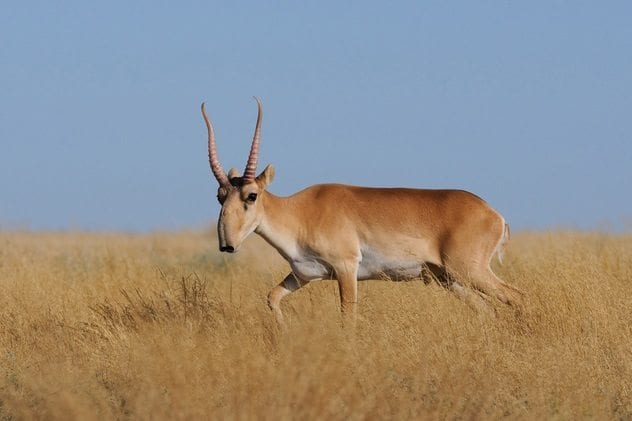 The hump-nosed saiga antelope roams the dry steppes and grasslands of Central Asia (primarily Kazakhstan) and has become critically endangered in a staggeringly short time period. It boasts a strange, elongated snout, which hangs over its mouth and helps to keep dust out of its lungs. Populations of saiga have declined exceptionally rapidly since the 1990s, from over a million herds to a mere 50,000 individuals. Unregulated hunting practices following the collapse of the Soviet Union and the illicit horn trade have contributed to this.

However, a stranger phenomenon has been the leading factor in the saiga’s unfortunate reduction. Mass die-offs have been occurring, including a shocking 134,000 dead over a two-week span in May 2015. The cause of these massive, herd-demolishing events is still unknown, but it has left already diminished saiga populations in dire straits. 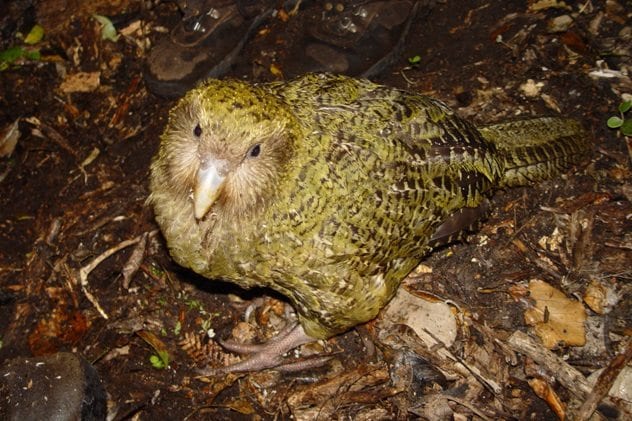 Native exclusively to New Zealand, the flightless kakapo has the distinction of being the only ground-dwelling parrot in the world. With a population of an estimated 125 surviving individual birds, it is one of the most endangered creatures in existence today. Though once endemic from the northern tip of the North Island to the furthest reaches of the South Island, the native kakapo population is now restricted to three offshore islands: Codfish Island, Little Barrier Island, and Anchor Island, where predatory animals have been eliminated.

While kakapo were traditionally hunted in the past by Maori populations for both meat and feathers for clothing, populations suffered the most due to introduced predators from Polynesian settlers and especially European settlers. Due to their ground-dwelling nature, their nests are extremely vulnerable to predators such as cats, rats, and stoats. There is good news, however: Due to tireless conservation efforts, the native Kakapo population has actually risen 68 percent since 1955. Great work, New Zealand. 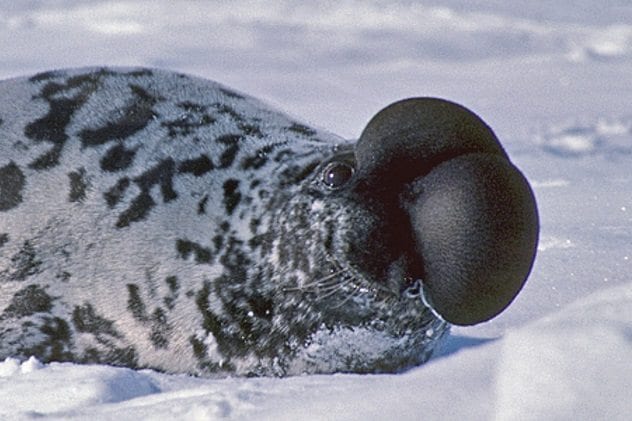 The exceptionally distinct, bulbous-faced hooded seal is a vulnerable species, boasting a mere 650,000 individuals in the wild. Its territory typically ranges across the ice drifts bordering coastal Norway, Iceland, and Greenland.

The hooded seal’s sexual dimorphism goes beyond a mere size difference, as males boast a large, inflatable bladder hanging between their eyes and upper lip. This bladder is in fact their nasal cavity and is able to expand to twice the size of a football. Males inflate their bladders in aggressive displays against other males. Hooded seals can also inflate a reddish, balloon-like membrane out of one nostril.

Although annual Canadian, Russian, and Norwegian hunts impact the populations, it is more likely that reduced fish resources are adversely affecting their numbers. As overfishing has begun to affect local fish populations, individual hooded seals have been observed as far south as the Canary Islands in search of more populous prey. 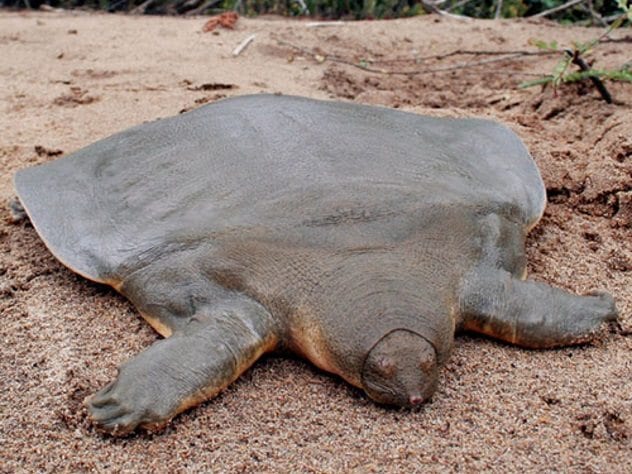 Though on first glance it appears to be a tortoise left out in the sun to melt, the Cantor’s Giant Soft Shelled Turtle (aka the Asian giant Soft-shelled turtle) is a large species of freshwater turtle found in a surprisingly substantial range across Southeast Asia, though its original territory spanned from India to Indonesia. It has become increasingly endangered.

This ambush predator spends most of its life underwater and buried in sand, with its head protruding from the sediment, waiting for unlucky prey to swim over. It returns to the surface infrequently to gather air. Due to its slow nature, it’s an easy target for collection by international hunters and as a source of meat for locals as well. Due to its frequently submerged nature, it’s also quite vulnerable to flood events and the damming of rivers. 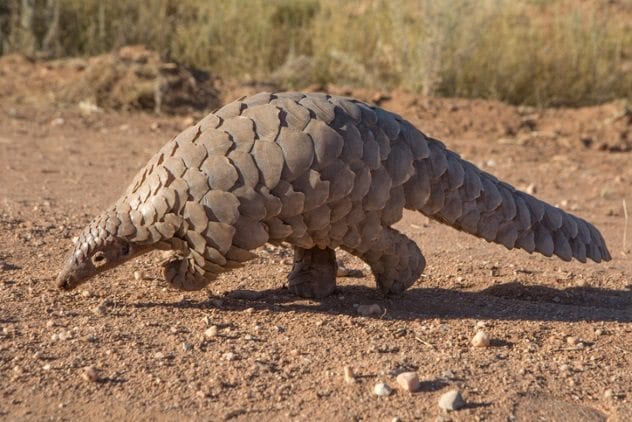 Boasting a hard-scaled frame and a tongue longer than its body, the pangolin has the ignominious distinction of being the world’s most trafficked animal, comprising an estimated 20 percent of the entire animal black market. Covered from tip to tail in armor-like scales, the pangolin can roll into an armored ball when threatened or frightened by predators.

Its highly valued scales are composed of keratin, the same material as your very own fingernails and hair, and are commonly sold on the black market for purported medicinal purposes. These remarkable scales make the pangolin the only scaled mammal in the world. (Armadillo armor is considered to be a leathery hide.)

There are eight species of pangolin, four in Asia and four in Africa, ranging from a rating of vulnerable to critically endangered. Pangolins have mostly been hunted in Asia for their scales and occasionally for their meat, though a sharp increase of hunting in Africa has been noted as of late. As a result, two of the eight pangolin species are now listed as critically endangered by the IUCN. 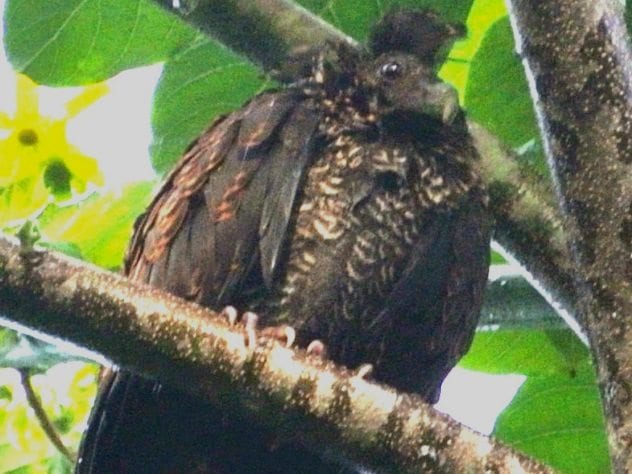 The critically endangered tooth-billed pigeon of Samoa is distinct for its relation to the most famous extinct species of all time. Affectionately nicknamed “The Little Dodo,” the tooth-billed pigeon is the only living relative of the infamous Dodo. Locally known as the manumea, it is Samoa’s national bird and is also featured on the nation’s 20-tala note.

Though hunting of the bird is banned throughout Samoa, its population is declining, largely due to agriculturally based deforestation as well as devastation of canopy cover by cyclones. Introduced species such as rats and domestic cats are also a large contributing factor in the declining populations of young nestlings. Some good news remains for the future of the tooth-billed pigeon, though, as a juvenile of breeding age was seen and photographed for the first time in a decade in 2014, indicating the possibility of a young breeding population. 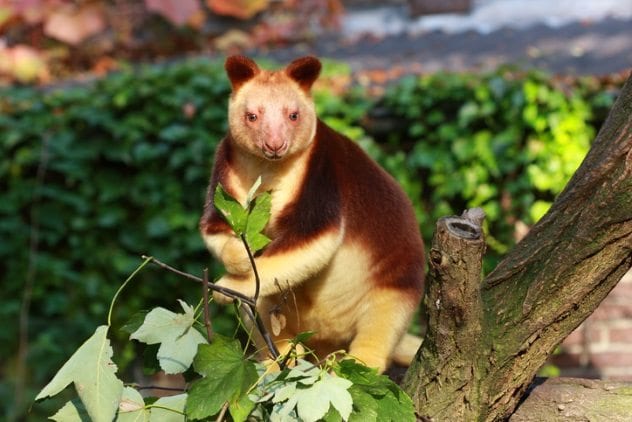 Though lesser-known than their beloved ground-dwelling relatives, tree kangaroos are closely related to both kangaroos and the common wallaby. Although 13 species of tree kangaroo have been documented to date, many are exceptionally rare, and numbers across all populations are diminishing. Inhabiting the lowlands and mountainous rain forests of Papua New Guinea, Indonesia, and Northern Australia, they feed on leaves and fruit found in their arboreal habitats. Their chief threats are being hunted for meat and, more significantly, habitat loss due to deforestation.

Sightings of tree kangaroos in the wild have typically been rare and are becoming rarer as their range is threatened. Complicating matters, decreased tree cover exposes the slow-moving animals to ground-based dangers they may not normally encounter, such as dogs and even being run over by cars on introduced roads. 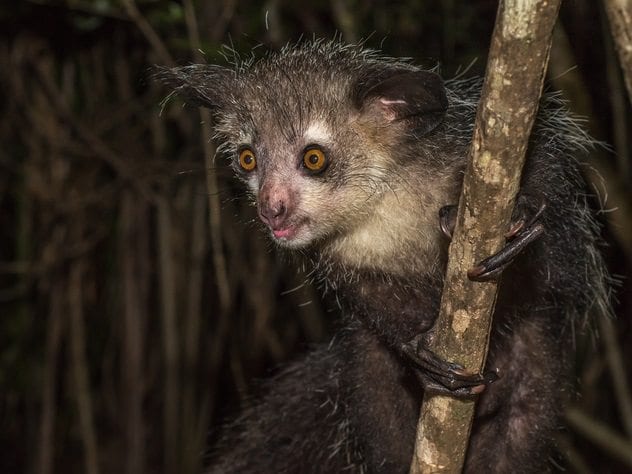 With a name like Daubentonia madagascariensis, there’s little wonder that most have taken to calling this strange-looking lemur the aye-aye. Found exclusively on Madagascar, it primarily inhabits the rain forest canopy areas on the east coast of the small nation. The aye-aye utilizes its extremely long, skeletal-looking third finger to probe the inside of trees for insect larvae to eat. It listens for grubs and larvae under the tree branch and then extracts them utilizing its large teeth and long finger.

The nocturnal aye-aye’s large eyes, spooky appearance, and strange middle finger make it incredibly distinct and unique. Though the primary threats to its survival are habitat loss as well as culling as a crop-killing pest, there is a third, more unusual, reason for its decline: Due to its strange appearance, local communities often view the aye-aye as a bad omen, and as a result, it is often killed on sight.