While the Victorian Era in Britain saw financial and economic booms, the era also saw an increase in poverty rates and crime rates. This was a negative side effect of the Industrial Revolution, which created wealth for some but also reduced the living standards of others. Institutions such as Broadmoor and Pentonville harbored criminals ranging from thieves to murderers, many of whom suffered from severe mental illness. Other mad and murderous individuals found themselves at the mercy of Victorian-style justice following their heinous crimes. 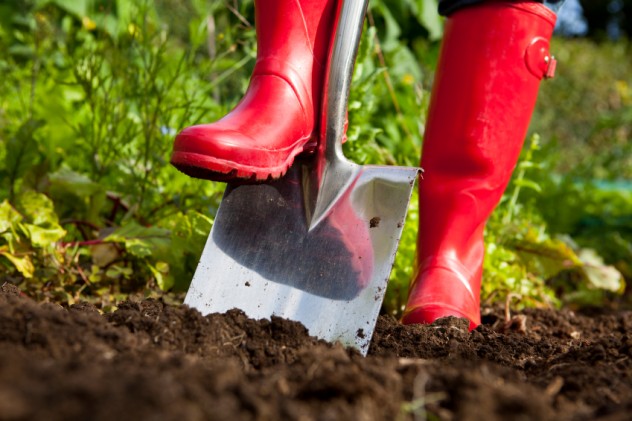 Born in Birkenhead, William Thomas was not your average farm laborer. From an early age, the young Mr. Thomas suffered from excruciating, recurring headaches. Fearing for his health, his caring mother decided to admit him to a mental asylum. She told her son of her plans, believing it to be in his best interests. This act proved to be fatal.

Taking great offense at her decision, he waited until she was sleeping and then brutally cut her throat with a kitchen knife. After dismembering her corpse, he then proceeded to bury her in the garden. His activities were noticed by a neighbor, who contacted the police. He was subsequently arrested and spent the rest of his life in working as a cook and preparing meals for his fellow inmates in Broadmoor Hospital, until his death in 1908. 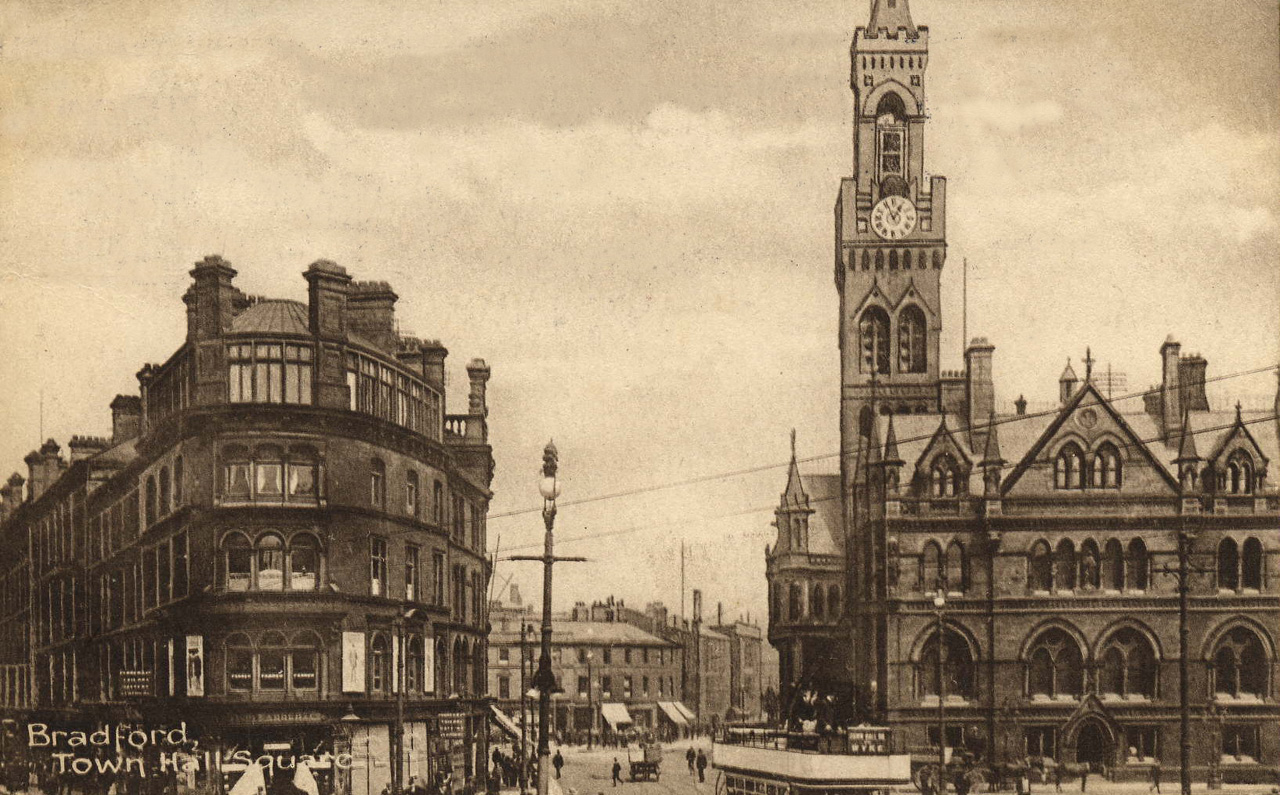 On the morning of December 29, 1888, a grim discovery was made in the Yorkshire town of Bradford. The body of a young child was found inside an
outhouse, mutilated almost beyond recognition. His arms and legs roughly hacked off, his ears removed, and his heart torn out and cast aside on the ground nearby. The body was that of eight-year-old local boy, John Gill. At the time, the country was in the grip of the Ripper murders, and speculation at the time was that it was his work, although no evidence existed to support the theory. Shortly afterward, a local milkman was arrested on suspicion of killing the boy. The man was able to identify the body as that of Gill, because Gill used to accompany him on his rounds. However, the evidence presented was insufficient, and he was released. To this day, the true killer has not been identified. 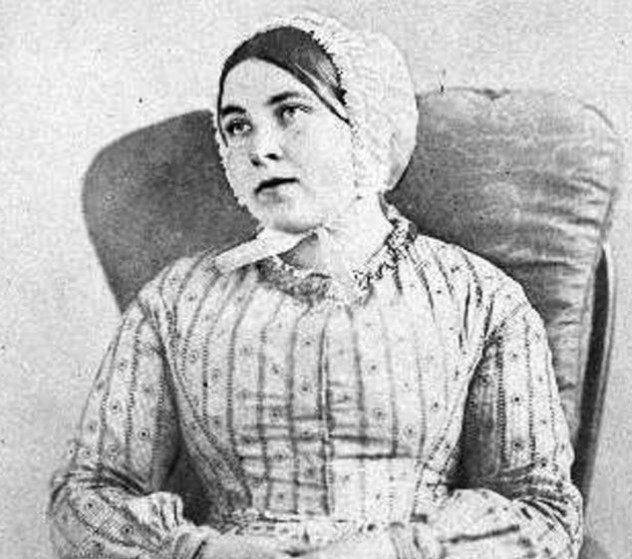 Martha Bacon was from Lambeth, London. She had already done a stint in a mental hospital due to her erratic and sometimes violent behavior, but once she was deemed to be “treated,” she was released back into society and the arms of her family. Sadly, her psychotic behavior was far from cured and, on December 29, 1856, she took a butcher’s knife and brutally murdered her two young children, slashing at their throats almost to the point of decapitation.

After being questioned by police, she vehemently claimed that the murders were committed by a crazed intruder. The evidence did not back up her claims, and she was found guilty of murder by reason of insanity. She spent the rest of her life in a high-security mental hospital, using her spare time (of which she had plenty), to knit children’s clothes and practice needlework. 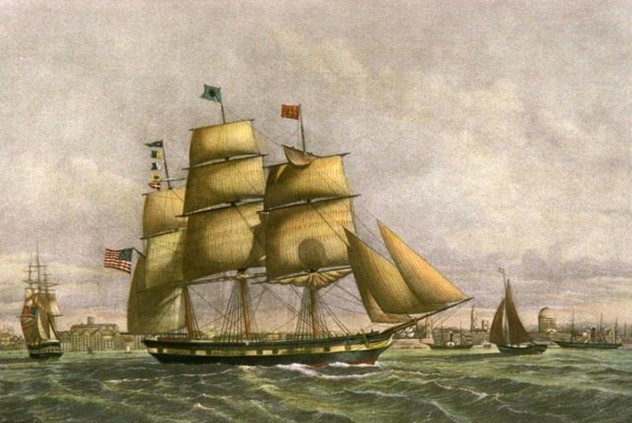 George Johnston was the captain of the SS Tory, operating between Hong Kong and Liverpool in the 19th century. Maintaining trade routes between the locations was imperative at the time as both Liverpool and Hong Kong were major industrial locales, and Captain Johnston was entrusted with ensuring that operations ran smoothly and professionally. Unfortunately, he broke that trust when he attacked and killed a member of his crew with a saber during a bout of drunken rage. He claimed his actions were to quell a mutiny, but the crew’s testimony painted a far different story.

They claimed that the less-than-professional and profoundly insane Captain Johnston was in an almost constant state of alcohol-induced excitement, during which time he would have crew members shackled and then proceed to torture them by slicing their flesh with his razor-sharp saber. Although he was found not guilty on the grounds of insanity, he would spend the rest of his life in Broadmoor, haunted by delusions of persecution. 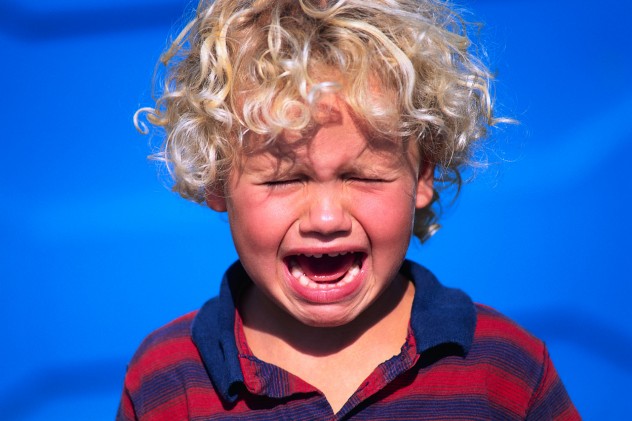 In April of 1900, four-year-old James Dawes ran to his mother in a flood of tears. The child had been badly cut around his face and neck. “Grandpa was drunk and tried to kill me!” he screamed. His mother, knowing young James to be a bit of a fantasist, dismissed his claims. However, far from being a typical, loving grandparent, Joseph Holden was a vicious and mean-spirited drunk who seemed to revel in making his family’s life a misery.

After months of putting up with him, his daughter Mary, mother of James, told him that he should move out because of his negative influence on the children (which obviously made him pretty angry). Being a father of seven children, Holden believed that it was time he was looked after. In an act of revenge, he had indeed attempted to kill young James. Worse still, two weeks after the attack, he succeeded in killing Mary’s older son, John. After stabbing the young child to death, he dumped his body in a quarry. When questioned about his motives, all he said was “I did it to get even with her.” He was hanged later that year at Strangeways Prison. 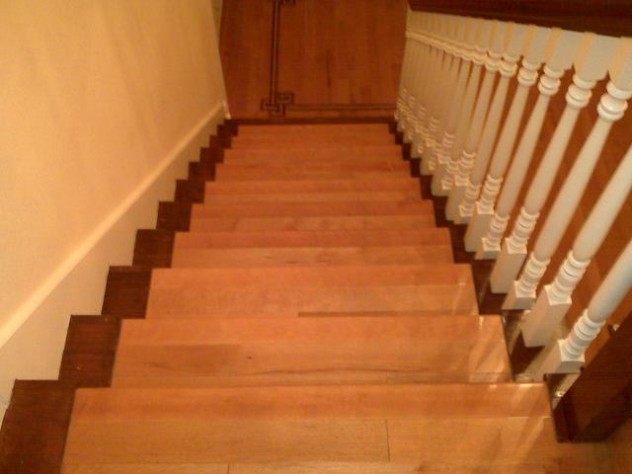 On January 29, 1879, Julia Martha Thomas, a middle-aged former schoolteacher, took on a servant by the name of Kate Webster. Unbeknownst to Mrs. Thomas, Miss Webster came from an extremely troubled background and held a rather lengthy criminal record. It had also been noted by authorities that she harbored an excitable and often aggressive attitude. The relationship started off well, but friction between the two soon developed.

In March of the following year, a quarrel broke out. Webster, in a fit of rage, pushed Thomas down the stairs. However, the severe impact was not sufficient to kill her. Still enraged, Webster ran to the bottom of the stairs and proceeded to throttle her to death. Determined to dispose of the corpse, Killer Kate dismembered the body, boiling and burning as much of it as possible inside a large copper kettle. She then discarded the body parts in various locations throughout the area. She was eventually caught following an attempt to sell the contents of her victim’s house. Police searching the property discovered body parts and bloodstained items of clothing. Despite an extensive search, it would not be until 2010 that Julia Martha Thomas’ head would be discovered on the grounds of a house now owned by David Attenborough. 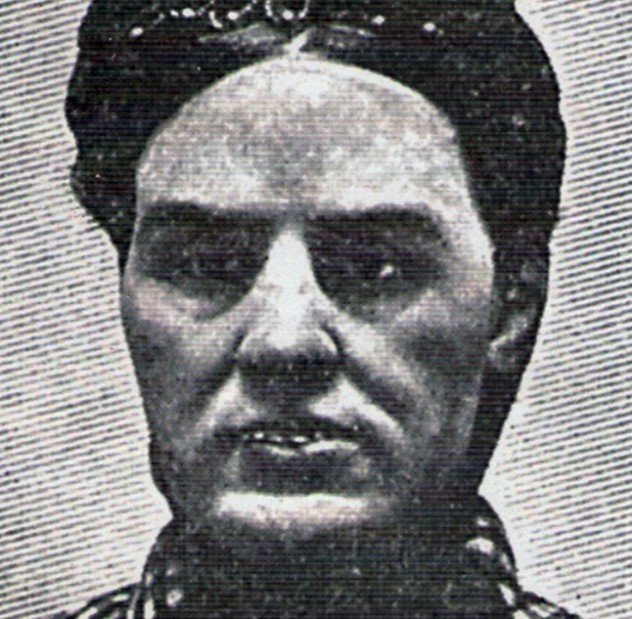 Mary Ann Cotton was arguably one of the most notorious serial killers England has ever seen. Born into a fiercely religious household to a young mother and a strict disciplinarian father, her childhood was turbulent to say the least. In 1852, the 20-year-old Cotton married William Mowbray. They had five children. Sadly, four of them died from supposed gastric flu. The family moved to the north of England where they had three more children. However, as before, the three children (and Cotton’s husband, this time) soon died of similar ailments.

She married again, only for her new husband to also die. Rumors her possible involvement in the deaths began to circulate, and her trail of dead family members scattered around northern England was soon discovered. She was eventually arrested in 1873 and found guilty of murder. It is speculated that she killed at least 15 people, probably using arsenic to poison many of them. She was sentenced to death and hanged at HM Durham prison, county Durham in the northeast of England. 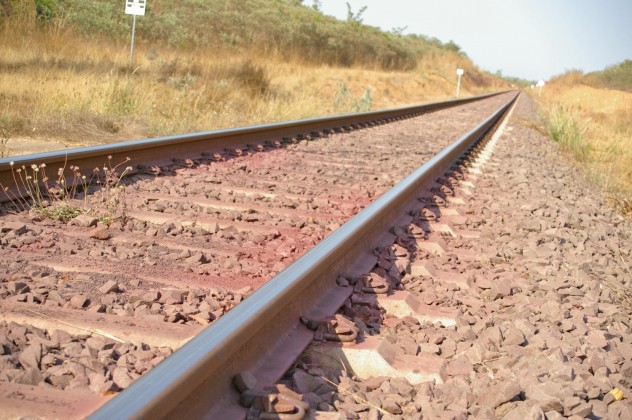 On September 22, 1888, Jane Beadmore headed out to buy some sweets. She never returned. A search was organized and her body was eventually found next to a railway line at Birtley Hill, Gateshead. Jane had been brutally slain. She had been stabbed in the chest three times, and even more alarmingly, her abdomen had been viciously torn open almost to the point of her being disemboweled. The murder was committed at the height of the Jack the Ripper slayings, so there was some speculation that the infamous killer had moved into the area, but it was eventually discovered that the young Jane had in fact been killed by a local factory worker by the name of William (Willy) Waddell.

Waddell had been going out with Jane, but she had refused his sexual advances. On the evening she was killed, the pair had been arguing about Waddell’s excessive drinking habits. Enraged, he killed her. Once the full realization of what he had done sank in, he attempted to cover his tracks by imitating the style of Jack the Ripper. He was arrested and later hanged for his heinous crime. 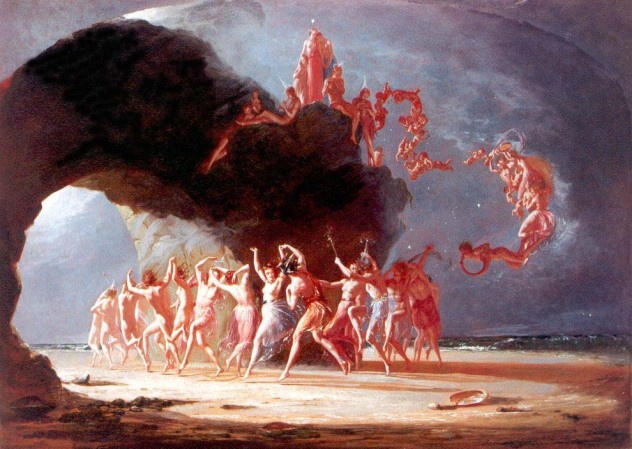 Prior to his murderous activities, Richard Dadd spent much of his time painting. He became noted primarily for his intricate depictions of fairies and other mythical beings. He would while away the hours sketching and taking influence from the serene countryside around him. However, his pursuits were soon to take a decidedly creepy and murderous turn. During a painting expedition to Egypt in 1882, he suffered a severe mental breakdown, and his personality changed drastically. He became violent and aggressive and, more alarming, believed himself to be under the control of the Egyptian god Osiris.

Upon returning home, his behavior escalated. Believing his father was the devil incarnate, he stabbed him to death. During his attempt to flee the country, he slashed a tourist’s throat, at which point he was caught and arrested. He continued to paint long after his imprisonment. His work can be viewed at the Tate Gallery in London. 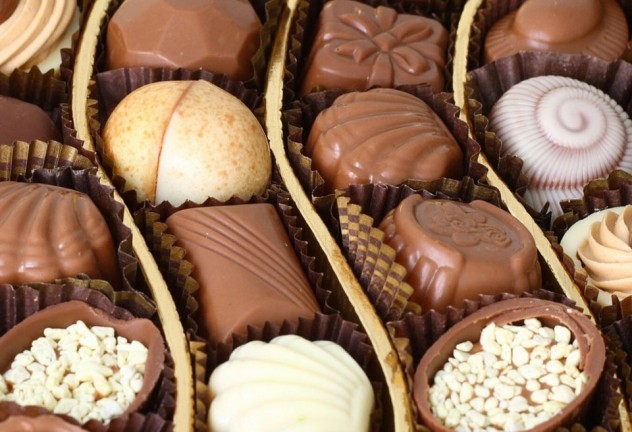 Christiana Edmunds, the Chocolate Cream Poisoner, was born in Margate in 1828. By all reports, Edmunds was an attractive young woman who suffered from an untreated mental illness, which only became known after her heinous crimes were revealed. In the late 1860s, while living in Brighton, Edmunds started an affair with a married doctor. When he attempted to end their relationship in 1870, she visited his house with a gift of chocolates for his wife, who became violently ill soon after eating them and did not recover for several weeks.

Several months later, still tortured by her lover’s denial, Edmunds began buying chocolate creams and lacing them with strychnine. She then sold the toxic concoctions to unsuspecting members of the public. Many members of the local community became seriously ill; one, a young boy by the name of Albert Barker, died. Despite this, Edmunds escalated her campaign of hatred, sending the poisoned sweets to prominent people including her initial victim, the doctor’s wife.

By this time, the police had connected the poisonings to the chocolates, and it was only a matter of time before she was arrested. At her trial in 1872, her mother testified that her family had a history of mental instability and that this was a contributing factor toward her actions. The Chocolate Cream Poisoner spent the last of her days in an asylum for the criminally insane.

James is a freelance writer and photographer from Durham City, who spends too much time working and not enough time traveling the world.