Humankind has always been impressed by really, really large things. Whether natural (like the Grand Canyon, which hosts around five million visitors per year) or man-made (like, say, the world’s largest fire hydrant in Beaumont, Texas, which draws considerably fewer), we seem to be inexorably drawn to things that make us feel tiny.

It seems that in our never-ending quest to list interesting things, though, some of the largest have been strangely overlooked. 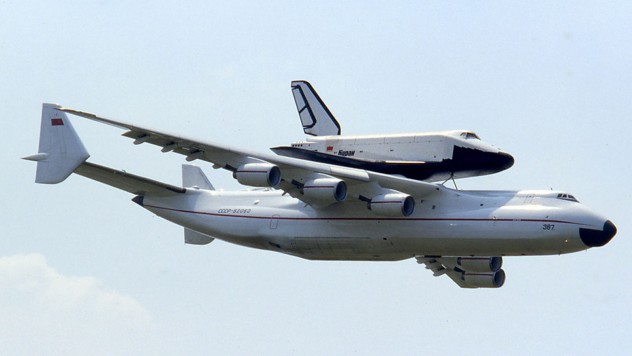 What you see in the image above is the AN-225 “Mriya,” a Ukrainian airliner, giving a piggyback ride to a Russian space shuttle. Yes, the world’s largest aircraft is capable not only of delivering hundreds of tons of cargo and complete, arena-sized concert stages, it’s the aircraft you will need if you’re transporting other aircraft—a Boeing 737 can fit inside its cargo hold.

Built in 1988, it was easily (by 50 percent) the largest plane in the world at the time—and remains so today (yes, there is only one of these). Inactive for about seven years after the collapse of the Soviet Union, the massive aircraft was restored and put back into service in 2001, and it gets plenty of use, since it can transport cargo that literally no other plane on Earth can.

Construction began on a companion to “Mriya” (translated as “dream” or “inspiration”), but stalled, probably because it would require another $300 million to complete. It’s landing gear has an astounding 32 wheels, and it holds the world record for heaviest airlifted payload, almost 560 tons—far short of its maximum rated takeoff weight of 640 tons. Its wingspan is the length of a football field, and it’s almost that long from nose to tail as well. 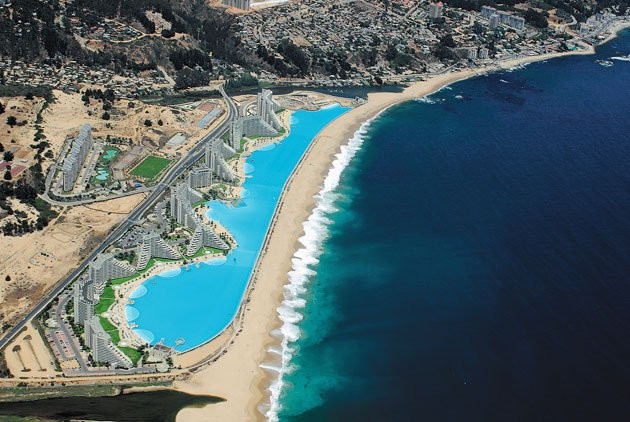 Most hotel swimming pools are nothing special—they’re known for being small, crowded, and shallow. In an attempt to keep those adjectives out of their pool, designers of the outdoor swimming pool at San Alfonso Del Mar Resort in Chile seem to have overcompensated a bit.

In photos, it looks like some kind of weird, clear lagoon running the length of the resort’s main beach. Upon further inspection, yes, it is actually a swimming pool, and the sheer numbers associated with it boggle the mind. Covering 20 acres, the pool is over 900 meters (3,000 ft) long (the second-longest, in Morocco, is a measly 137 meters). Its deep end is 35 meters (115 ft)—also a world record—and it holds 66 million gallons of water. Also, it could engulf 20 Olympic-sized swimming pools, took five years and nearly $1 billion to build, and costs about $2 million yearly to maintain.

The pool uses an advanced suction and filtration system and virtually no chemicals, making it surprisingly environmentally friendly. Says biochemist Fernando Fischmann, whose company designed the pool: “As long as we have access to unlimited seawater, we can make it work, and it causes no damage to the ocean.” 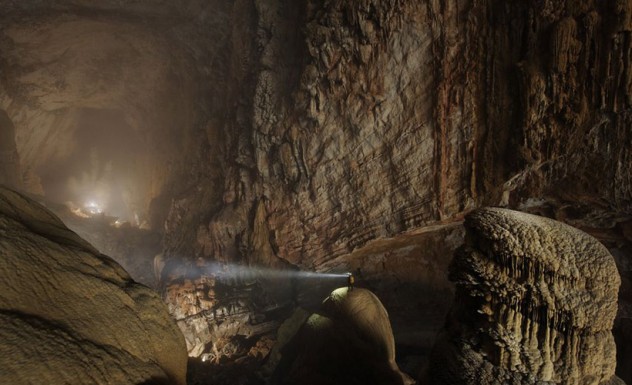 In 2009, a local farmer brought a group of British explorers to the entrance of a cave he had found years earlier in Vietnam’s Phong Nha-Ke Bang National Park. They were excited at the prospect of finding a new cave system, but what they found was an underground river running along the floor of the single largest cave passage that has yet been found.

Take another look at the above image; in case you missed it, there’s a caver standing on the rock near the middle of the frame. Note that you cannot see the cavern’s ceiling above him. The cave is in a very remote region—previous cave-seeking expeditions to the area likely came very close to finding it, but the terrain is exceedingly difficult. At least five kilometers (three miles) long, the cavern boasts natural skylights (where weaker limestone has washed away) and spectacular ceilings nearly 300 meters (1,000 ft) high. 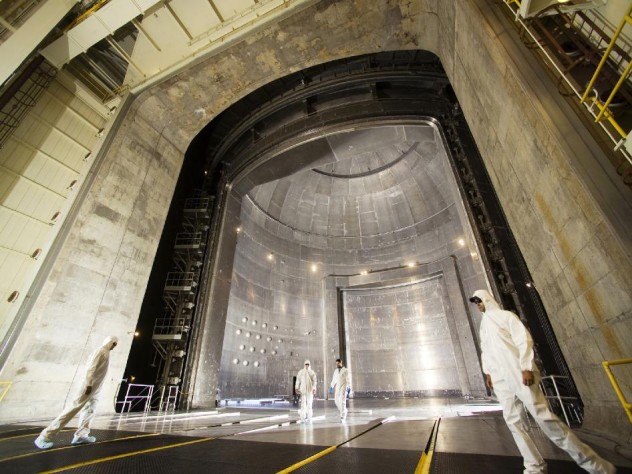 Vacuum chambers are used to recreate the conditions of space: to see, for instance, how matter clumps together in the absence of gravity or to test components of space suits. There are some very large ones out there, but only one so large that it’s capable of performing environmental testing on a completely assembled spacecraft: the Plum Brook chamber in Sandusky, Ohio.

The chamber has been used for testing of the Orion Multi-Purpose Crew Vehicle, a craft that NASA hopes will one day take astronauts back to the moon and maybe to Mars or distant asteroids. The Plum Brook chamber is 37 meters (122 ft) tall—easily sufficient to fit the spacecraft, at 23 meters (75 ft)—and an incredible 863,000 cubic feet. If you’d like to get a really good idea of the chamber’s immense size, though, just watch The Avengers again. The opening scene, in which Loki steals the Cosmic Cube, was filmed in it. 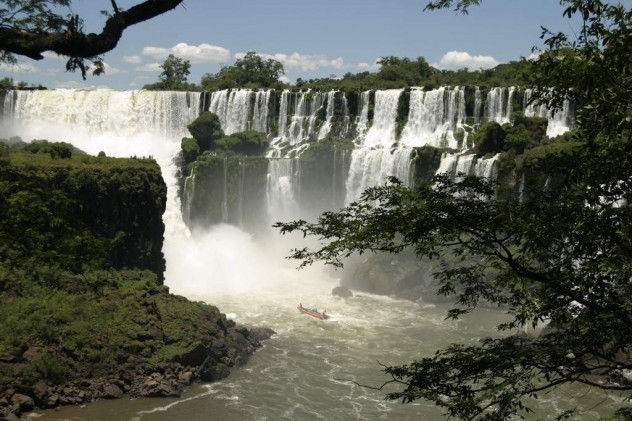 Inga Falls, along the Congo in Kinshasa, Zaire, is certainly not the tallest waterfall in the world. Heck, it’s not even close—its longest drop is a measly 21 meters (70 ft). (There are three waterfalls in the world with drops over 3,000 feet, to put that in perspective.) At four kilometers (2.5 mi) wide, it may not be the widest of falls, either—but it moves more water than any other waterfall on the planet. A lot more, as it turns out.

Most are familiar with the image of Niagara Falls, or perhaps Victoria Falls, as a standard for huge, terrifying falls that move (literal) tons of water. Victoria moves a lot: over 38,000 cubic feet per second. Niagara moves over twice that much: around 85,000. Inga Falls has an average discharge rate well over 10 times that of Niagara—over 900,000 cubic feet of water per second. Its closest competitor, Livingstone Falls (along the same river), discharges 25,000 cubic feet per second less than Inga; the next closest doesn’t even compare. Niagara and Victoria Falls come in 11th and 15th on that list, respectively. 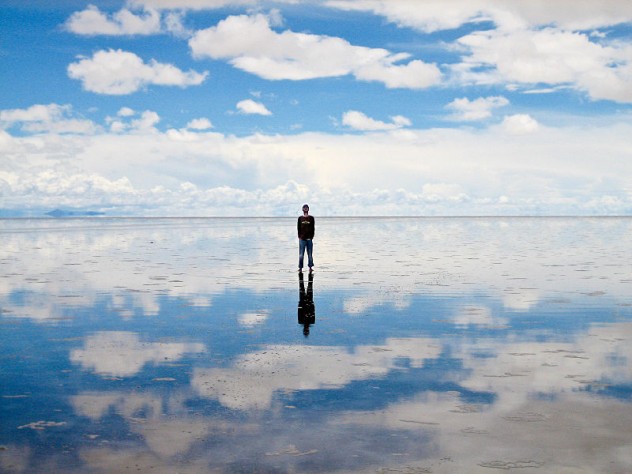 The Salar de Uyuni (“Uyuni Salt Flat”) lies atop an extremely high plateau in southwestern Bolivia—at almost 3,600 meters (12,000 ft), the elevation is twice as high as mile-high Denver, Colorado. The salt is as thick as the air is thin (several meters thick, in most places), and the sheer surface area is astonishing—over 10,000 square kilometers (4,000 square miles).

The area, of course, produces a lot of salt. Also? Plenty of lithium. Enormous untapped reserves lie beneath the surface of the flats, comprising an estimated one-half to two-thirds of the world’s reserves. While it looks exceedingly desolate, the area is also home to one of the world’s largest pink flamingo habitats and about 80 other bird species.

The area has another amazing feature: for much of the year, a thin layer of water covers the surface. This produces the effect seen in the above photo. The world’s largest salt flat appears, during these seasonal times, to be the world’s largest mirror. 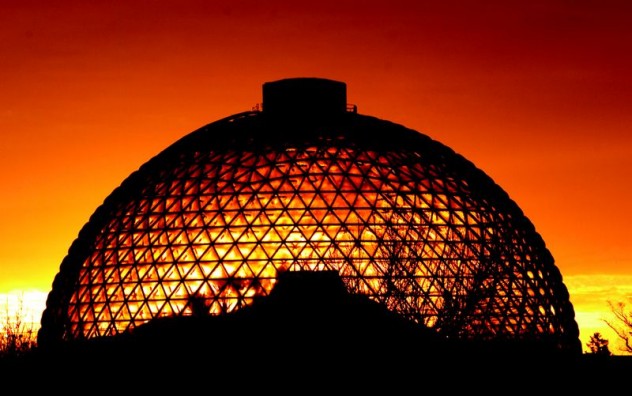 When it comes to naming the world’s largest zoo, there’s more than one way to skin a . . . to calculate such a thing: by area, by the number of species on display, or a matrix involving both. The latter actually makes the most sense—at 12,000 acres, Red McCombs Wildlife in Texas could be considered the largest zoo by acreage, but only hosts about 20 species.

So while it has neither the largest acreage nor the highest number of individual species on display, travel website Touropia proclaimed Henry Doorly Zoo in Omaha, Nebraska, to be the largest in the world using the combined matrix. The 130-acre complex hosts 17,000 animals of over 960 different species and welcomes over 1.5 million visitors annually. The zoo is also home to the world’s largest indoor desert and has the biggest cat complex and largest geodesic dome in North America. 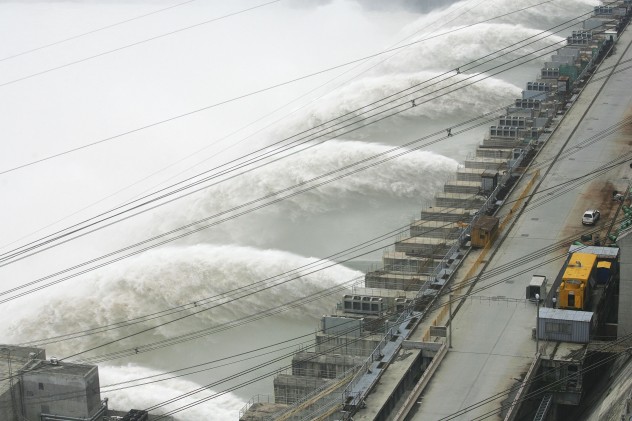 For almost 20 years, the Chinese government forged ahead with the Three Gorges Dam project, despite concerns both at home and abroad about its potential ramifications. The threats to the surrounding environment and historical areas, to say nothing of the tens of thousands of locals displaced by the project, were all downplayed by officials throughout the dam’s construction. Only after its completion, at an estimated cost of $23 billion, did China admit that perhaps there were some valid environmental concerns.

And indeed: over one million residents of the Yangtze Valley were displaced by the project, and environmentalists are concerned that its lake has now become a dumping ground for industrial waste. Other environmental and logistic problems (like downstream ports being unable to accommodate ships after a 2011 drought) have also presented themselves in the wake of the dam’s completion.

But the numbers, in terms of power production and sheer scale, are mind-boggling. Standing at 2.4 kilometers (1.5 mi) in length and 180 meters (600 ft) in height, the dam enables oceangoing vessels to sail directly into mainland China for months out of the year and generates as much electricity as 18 nuclear power plants. Its capacity (22,500 megawatts) dwarfs that of it closest competitor, Itaipu Dam in South America (14,000 megawatts). 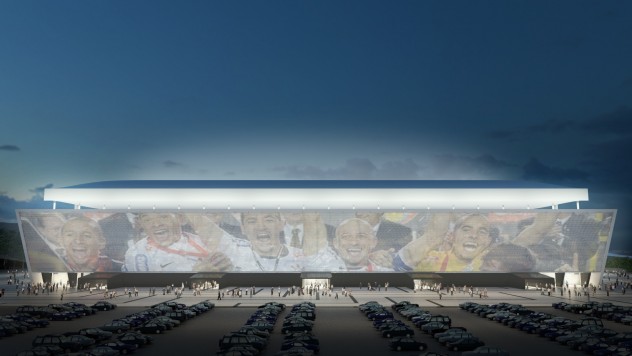 Arena Corinthians in Sao Paulo, Brazil is a big building. Nearing completion at the time of this writing, it seats nearly 50,000 and will be the 11th-largest stadium in Brazil, when it plays host to several FIFA World Cup football matches in 2014. It’s a sharp, modern structure, but its facade is what landed it on this list—the entire front of the building is one giant video screen.

The screen will be capable of displaying images, video, and scoreboard information that will be visible to anyone even glancing in the stadium’s general direction. At 20 meters (65 ft) high and an astonishing 170 meters (560 ft) long, the screen is comprised of 34,000 LEDs and is easily the biggest video screen in the world.

To put that in perspective: Americans’ jaws dropped when the gigantic video monitors of Cowboys Stadium were unveiled to the world in 2009. But the Cowboys’ monitors fail to place in the top five largest video monitors in the world, and they’re not even one-third of the length of the gargantuan Arena Corinthians facade. 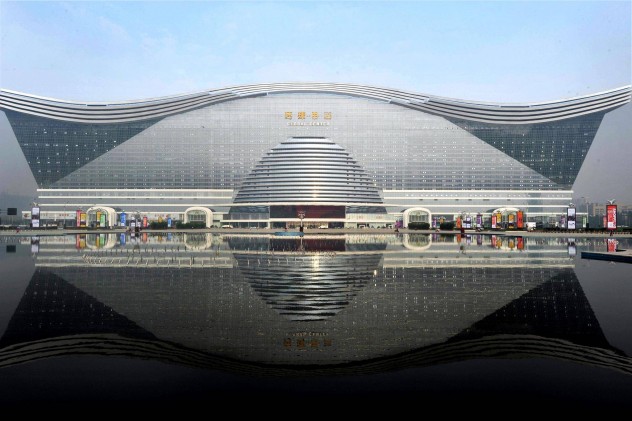 Finally, we go back to China, where the New Century Global Center opened for business in July 2013. In terms of its footprint, it is the largest man-made freestanding structure on the planet—almost 1.8 million square meters (19 million square feet) of space.

Taking three years to complete, the structure holds a 14-screen IMAX theater, an ice skating rink large enough to host sanctioned international competitions, a complete replica Mediterranean village, and (of course) a water park. The water park alone can accommodate 6,000 visitors at once, all of whom could easily be put up in the 2,000 available hotel rooms. But even these details don’t do justice to the immense scope of this facility—inside this building, you could fit 20 Sydney Opera Houses. Or over 300 football fields. Or Monaco.