Cycling in the Victorian era meant freedom and independence for a moderate cost. Women wore special cycle wear that allowed them flexibility whilst still preserving their modesty beneath long and heavy skirts. Gentlemen cycled in their top hats, children had tricycles and babies had their pushchairs attached to bicycles with which cycling nannies would perambulate around the park. Even shop boys delivered groceries on bikes with enormous wicker baskets.

Cycling was for everyone, and it became one of the defining Victorian obsessions.

Another thing the Victorians were famous for, was their ingenious, and sometimes wacky inventions. It was only a matter of time before the ever-curious Victorians decided to combine the two.

Here are 10 of the strangest.

10 John Otto Lose and his Monowheel 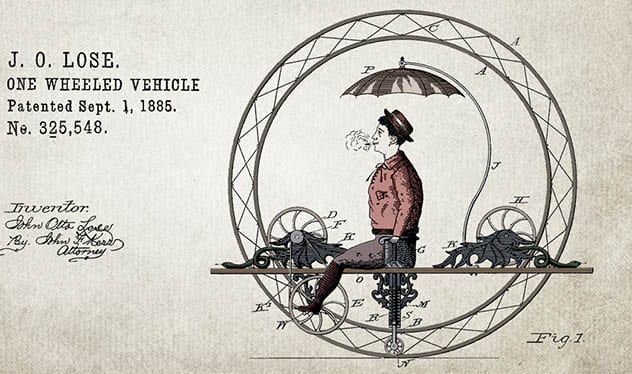 John Otto Lose’s patent application for the monowheel shows a gentleman in a hat, seated on a bench suspended inside a very large wheel, casually smoking a cigarette, while he pedals a smaller wheel at an angle that looks rather improbable and certainly uncomfortable. The cycle was steered by means of a pair of rudders on either side, almost as if it were a boat.

The bicycle, which looks a little unwieldy, boasts a range of mod cons, including an umbrella fixed over the cyclist’s head in case of inclement weather, and some fancy wrought-iron work which, while certainly decorative, probably added a fair bit to the weight of the machine. However, they did save a fair bit on the unpadded wooden bench, so it probably evened out in the end.

The monowheel was patented in 1885, but, for some reason, never caught on.

9Karl Lange and his Double Bicycle 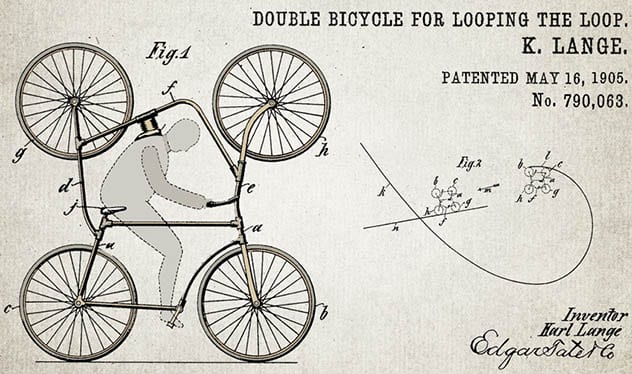 In 1905, Karl Lang patented his double bicycle, which is, pretty much, one bicycle on top of another, with the top one being upside down. It looked pretty strange, and also rather uncomfortable, as the rider’s head is forced forwards by a padded cushion behind his neck.

However, the cushion, and indeed the bike, had a purpose, being designed, according to Mr Lange, for the benefit of circus performers, to enable them to Loop the Loop.

Which seems reasonable, until you start to think about it.

The ‘normal’ part of the bicycle has two pedals and a handle-bar. The upper bicycle appears to be missing pedals, and shares the handle-bar with the lower bike. In order for the contraption to loop the loop, the loop would need to be so small that all four wheels were in contact with the surface at the same time.

And then it would very likely just get stuck.

In actual fact, despite what it said in the patent application, the bike was not really designed to loop the loop, rather it was a stunt bicycle which allowed the bike to take off on the lower wheels and land on the upper wheels, thus appearing to have completed a full loop.

Instead of pedaling through a full 360 degrees against gravity, the rider of the double bicycle merely had to pedal to the top of the loop on the bottom wheels, take off into the air, land on the top wheels, which he couldn’t see, whilst steering the wrong way up, without pedaling, or presumably, braking. Easy peasy.

There do not appear to be any records of stunt riders or circus performers actually using the bike.

8 Etienne Bunau-Varilla and his Torpedo Bicycle 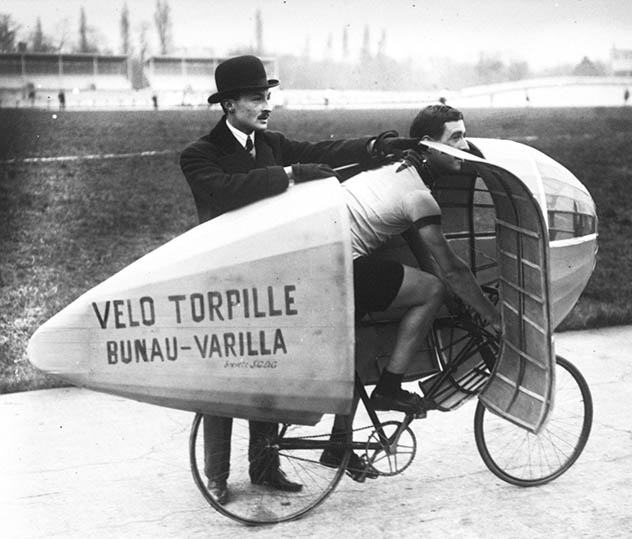 An invention that really worked this time. Etienne Bunau-Varilla was a French engineer and aviation pioneer, who had taken part in the first ever international flying convention in Riems in 1909, when he was only 19.

One of his most iconic designs was the Velo Torpille, or Torpedo Bike, an aero-dynamically streamlined bike in which the rider sits inside a teardrop-shaped pod.

The bike, ridden by Marcel Berthe, broke the world speed record in 1913, covering 5 km in 5 minutes and 39.3 seconds, an average of 33 miles per hour.

The design was much copied, until the following year, when the enclosed bicycle design was banned in competitive races and, not being very suitable for normal use, the torpedo bicycle was, well torpedoed.

7 Hiram Nickerson and his Aerial Bicycle 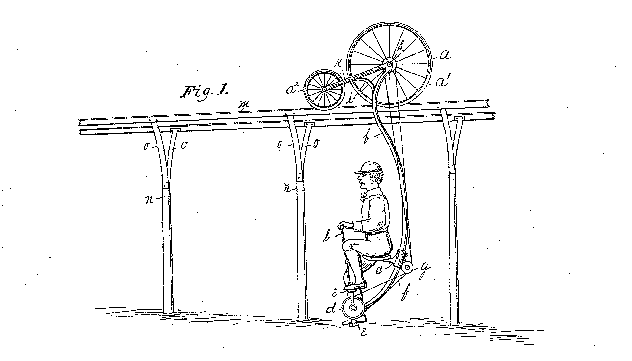 Hiram Nickerson’s idea for an aerial bicycle is the perfect example of why you shouldn’t over-complicate things. Instead of two wheels on a metal frame which rides over the existing roads, Nickerson proposed an aerial bicycle which required a whole elevated track to be built.

The rider would sit on a saddle hooked to the track overhead, and would propel themselves along the track by pedaling. The cyclist would only be able to cycle wherever there was track, which would have required some hefty infrastructure investment.

Nickerson’s patent application also left out a few details. Such as, how do you get your bike to and from the track? Do you hook it on to the track yourself, or leave it there like a cable-car seat? What happens if two cyclists are pedaling on the same piece of track? Can they overtake? Can they prevent a collision?

Hiram Nickerson described his idea as ‘a new and useful improvement’ in bicycle design.

Really? An interesting idea, perhaps, but this one never really got off the ground 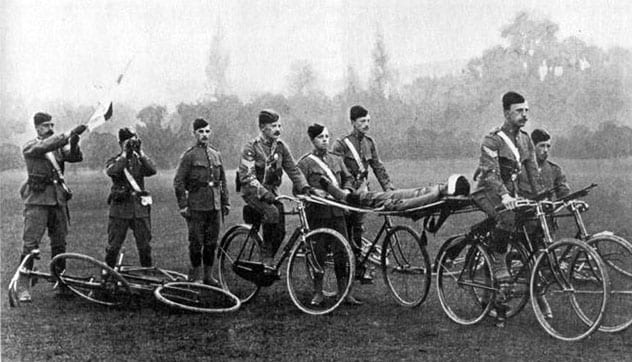 Necessity, they say, is the mother of invention, and this must certainly explain the bicycle ambulance. Makeshift ambulances had been used since the 1890’s, but they really came into their own during World War I.

The ambulance consisted of 2 bicycles, fixed together, side-by-side, with a tarpaulin stretcher slung between them. The saddlebags would be filled with medical supplies, and the medics would cycle out to the injured soldiers, load them onto the stretcher and cycle back with them to the nearest field hospital.

The bicycles could move over terrain that other vehicles could not cover, but they gave the medical personnel no protection from gunfire and shells.

At such a time of chaos and destruction, the sight of a couple of men cycling side-by-side across a battlefield must have been a pretty surreal one. 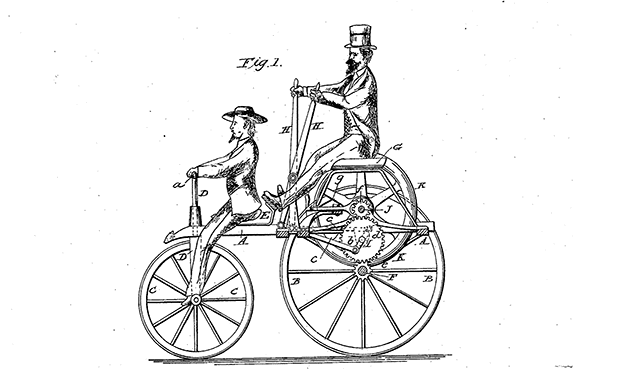 Simon Wortmann was clearly a man who took the axiom, why keep a bike and pedal yourself, to heart. His invention did away with most of the hard work of cycling, at least for 1 of the 2 riders needed to propel it.

The drawing which accompanied the patent application, shows a man in a flat cap pedaling like mad at the lower end of the bike, while a gentleman in morning coat and top hat sits at the top and steers with a couple of unwieldy poles.

Billed as an Improvement in Velocipedes, the bike seemed to model itself on the old-fashioned horse and carriage, with the servant, of course, being cast in the role of the horse.

Though Wortmann patented the idea in 1869, he never went into full-scale production with his bike. He probably couldn’t get the staff. 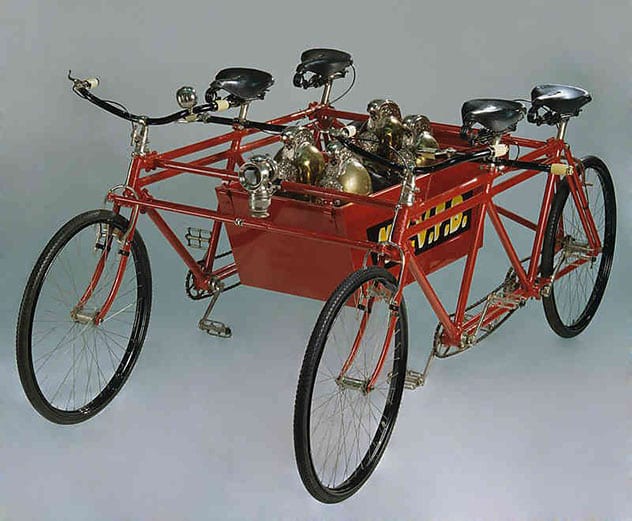 In the days when a fire engine was just a hand cart and a bucket, the Quadricycle Fire Engine must have seemed like cutting-edge design.
The machine consisted of 2 tandem bicycles, ridden side-by-side and fixed together by cross-pieces, with a platform built between. The platform housed the hose reel, while a pump was fitted to the rear of the quadricycle, which could be fitted to a household tap and used to supply the hose with water.

Firemen in Australia trained using the contraption, and were able to cycle to the site of the fire, unreel the hose, and fix it to the pump within a few minutes. Then they would jump back onto their bikes to continue pedaling, thus powering the pumping machine, which was capable of spraying 4500 gallons of water an hour over distances of up to 100 feet,

Although the machines may have looked somewhat comic, they were used in remote towns and villages with great success for many years.

3 Edward Burstow and his Hen and Chicks 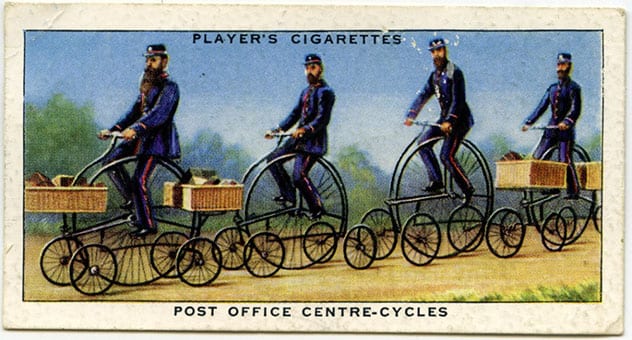 One invention that was not quite such a success was Edward Burstow’s pentacycle, or, as it came to be known the Hen and Chicks. Invented in 1882, the pentacycle, which was adopted by the Post Office in Britain, had one large wheel, on which the postman sat, with two smaller wheels, front and back, for added stability.

There is no doubt that the pentacycle was a majestic looking vehicle, though perhaps a trifle cumbersome. It did have two handy baskets in which the postie could store the mail on his rounds.

Ultimately, however, the pentacycle was not a success, perhaps because it took ages to climb up on it, only to have to climb off it again at the next house.

2 Georg Pinkert and his Navigating Tricycle 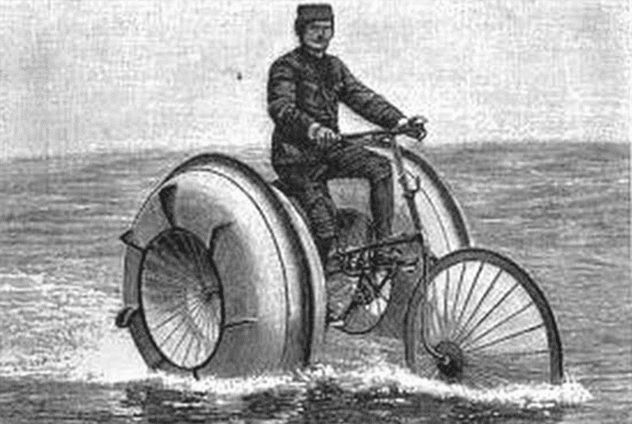 Nothing but a miracle, it is said, can allow a person to walk on water, but there is nothing to stop people cycling on it. Except, perhaps, the laws of nature.

But Georg Pinkert was not the sort of man to be put off with a trifle like that. In 1891, he patented the Navigating Bicycle, which was perhaps a strange title, since it doesn’t quite make clear that what the bicycle is navigating, is the ocean.

He built his tricycle with 3 enormous balloon tires, and so confident was Pinkert in the machine’s capabilities that he set out to cross the English Channel in it. He didn’t make it.

He had cycled about half way over the 20-mile strait, when the tide turned, and he found himself going 2 wheels forwards and 3 wheels back. He realized that he was about to be swept out to sea, so, as he happened to be in one of the busiest shipping lanes in the world, he “hailed a passing vessel and was taken on board.”

Though the tricycle had proved its sea-worthiness, it didn’t catch on, but Georg, every inch the Victorian eccentric, vowed to carry with his experiments. 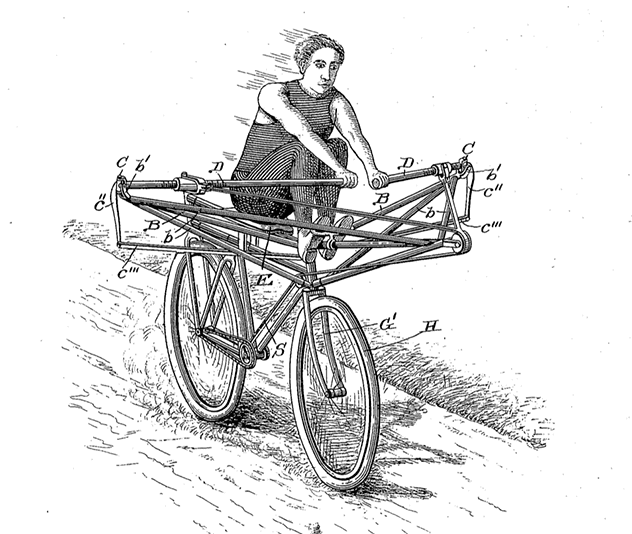 Cycling is good exercise. It builds up the muscles in the legs. But what if you wanted to exercise your arm muscles at the same time? The ever-inventive Victorians had the solution.

In 1898, Louis S Burbank invented the Bicycle Rowing Machine. Two work-outs for the price of one, with a free trip to the emergency room thrown in.

Burbank’s invention fitted a rowing machine to the top of an ordinary two wheeled bicycle. The machine was propelled forwards not by pedaling, but by the action of the rowing, and steered not with a handle bar, but by manipulating the oars, just as one would in a sculling boat.

Sounds great. Just a few nit-picky questions though. How does it start off? Because, by the time the rider has mounted the bike, put their feet in the stirrups and grabbed the oars, the bike will have toppled over. And how does it stop?

There is no mention of brakes in the patent application.

Of course, they could fix the bike in position so that it was static. But then of course it would just be a rowing machine.

Perched on top of a bike.

For more quirky lists like this, take a look at 10 Futuristic Forms Of Transportation We Could See Soon, and 10 Hilarious Travel Mishaps That Made The News.

About The Author: Ward Hazell is a freelance writer and travel writer, and is currently studying for a PhD in English Literature