If you look at the history of human culture, most of our technology was created with the purpose of making something easier. But recently we’ve been moving in a new direction: instead of creating technology that we can use, we’re making technology that makes it easier for us to use ourselves. There’s something terrifyingly romantic about the idea of a cyborg—the merging of man and machine—and these new technologies serve as subtle reminders that we are nudging our civilization inexorably closer to the brink of a cyborg age. 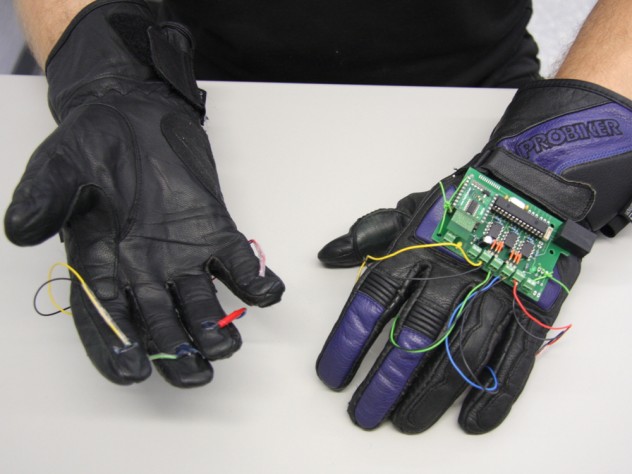 One of the attractions of becoming a cyborg is the possibility of extra senses. Humans have five senses (depending on how you divide them up), and most of them are linked to a specific organ. For example, you see with your eyes. But what if you had the ability to “see” with your hands when conditions weren’t the best for vision? Well, ask Anthony Carton and Lucy Dunne of the University of Minnesota, who are developing technology that will help firefighters navigate through smoke without needing to actually see.

It’s called the vibrotactile glove, and it uses a pair of gloves outfitted with an ultrasonic rangefinder. Inside the glove is a series of vibrating motors that, when activated by the rangefinder, will map the position of surrounding obstacles on the back of the wearer’s hand. A firefighter will be able to hold his hand in front of him and “feel” the position of everything in the room. 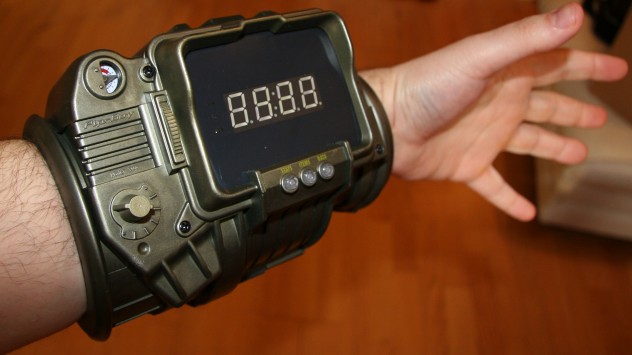 The area between a person’s wrist and elbow serves a very important function. Specifically, it keeps your wrist connected to your elbow. But to Simon Oberding and his team at Singapore University, that area is nothing more than wasted space. What Oberding plans to do with the forearms of the future is turn them into digital displays. He’s developed a prototype that straps onto the forearm and has four separate screens, each of which shows a different set of data. For example, one screen can display GPS directions while another scans YouTube for interesting videos.

At its core, Oberding’s prototype is just an extended wristwatch. To reach true cyborg level, you have to dig a little deeper and implant the watch directly under your skin. A Toronto software company—called AutoDesk—has been experimenting with implanted user interfaces. They don’t have a specific goal for the technology yet, but they’ve managed to successfully implant a touch sensor in the forearm of a cadaver and charge the embedded electronics with a Bluetooth receiver. They are still working on making the tech commercially viable. 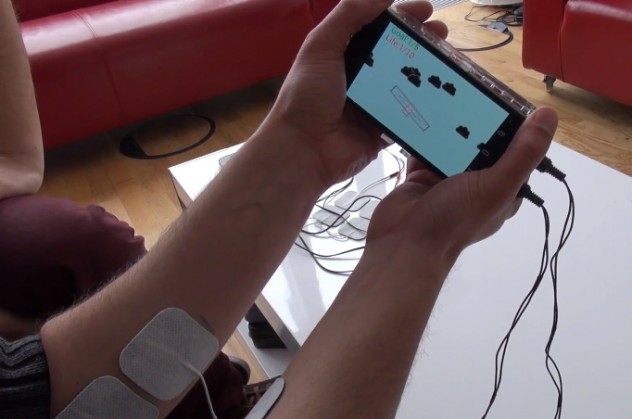 Haptic technology—or force feedback—is not new. If you’ve played a video game with a vibrating controller, you’ve experienced haptic technology—the rumble pack vibrates simultaneous with action in the game, providing a sensation along with the visual image. In some cases, force feedback is used to make you do something specific by creating a force that you naturally try to counter. Think of it like someone pushing you sideways—your body resists and pushes back towards them in an effort to maintain your balance.

Most devices that use haptic technology create the force with a vibrating motor, but there are limits to how small that can get, which means there are limits to what it can be used for. A team of German researchers threw out the motors entirely; instead, they use electrical stimulation on the muscles to force a response. In testing, they had volunteers play an airplane game on a smart phone while strong gusts of wind (in the game) periodically knocked the plane off course. As the “winds” hit, the player’s right arm would jerk up, tilting the game to the left and forcing them to compensate by using their other arm to tilt the phone back to the right position.

Video games aside, muscle-propelled force feedback will eventually be used when you’re trying to learn something new. So if you’re golfing, electrical impulses could gently nudge your body into the correct posture for the perfect swing.

We’ve already discussed the huge strides in reading brainwaves, like one experiment in which researchers flew a helicopter with brain signals picked up by an EEG sensor.

But using a different type of brainwave reader—known as functional near-infrared spectroscopy, or fNIRS—a group of researchers at Tufts University has developed a device that will not only pick up brainwaves, but actually organizes that data to tap into personal preferences. In this case, the fNIRS data was linked to a brain-computer interface that was able to accurately display movie recommendations. Stranger yet, the more a person used the system, the more accurate the predictions became, as if it was actually learning about that person over time.

These sensors are difficult to use in everyday settings because little things like head movements can disrupt the signal, but the same team is developing a program that can effectively filter out this noise. This could lead to a seamless brain-to-machine connection that will be able to make the perfect decision for you every time. It could tell you what movie you want to watch, what you want to eat, or even what kind of car you want to buy. 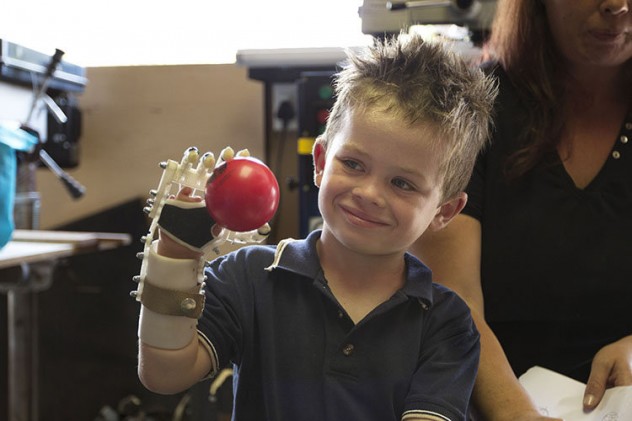 Perhaps the oldest form of cyborg technology is the prosthetic limb. We know that the ancient Egyptians used prosthetics, but we’ve come a long way from carving blocks of wood into the shape of a toe. In fact, we’ve made more progress in that area in the past decade or so than the rest of history combined. Take the BeBionic myoelectric prosthetic hand, which can move every finger joint individually via a connection to the skin and muscles in the amputee’s upper arm. A tiny twitch will orient the hand into a different position based on the electrical current running through the skin—giving the prosthetic full articulation that’s almost, but not quite, as realistic as using a real hand.

It takes a little practice, but eventually you can perform a huge number of tasks that wouldn’t be possible with a less advanced prosthetic, such as tying your shoelaces or using a computer mouse. 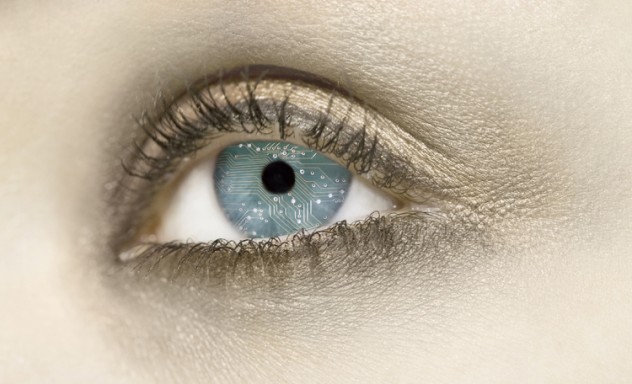 In 2005, neuroscientist Armand R. Tanguay Jr. wowed the world with his bionic eye that attached to the retina and received images from a digital camera mounted on a pair of sunglasses. But the future of bionic eyes looks even stranger—physicist Richard Taylor is developing an “implant” made of self-assembling fractal-shaped nanomaterial that can mimic eye neurons.

The biggest problem with cameras is that they don’t provide information in the same structure that the eye is used to. Retinal neurons are branched, like a fractal pattern, and a camera sends signals in a straight line. When a camera is plugged into a blind person’s retina, most of the information is lost in the gap between machine and living tissue. That’s why nearly every retinal implant to this point results in a hazy, grainy, black-and-white image—far from the resolution achieved by the human eye.

Taylor’s “nanoflowers” would form a more appropriate connection when implanted in the retina. Since they more closely resemble naturally occurring neurons, they would be able to mesh almost seamlessly with the still-working parts of a blind person’s eye, letting the brain receive the full transmission from a camera.

The next step is building a camera that can see with the 127-megapixel resolution of the human eye. At that point, a blind person would have perfect vision. 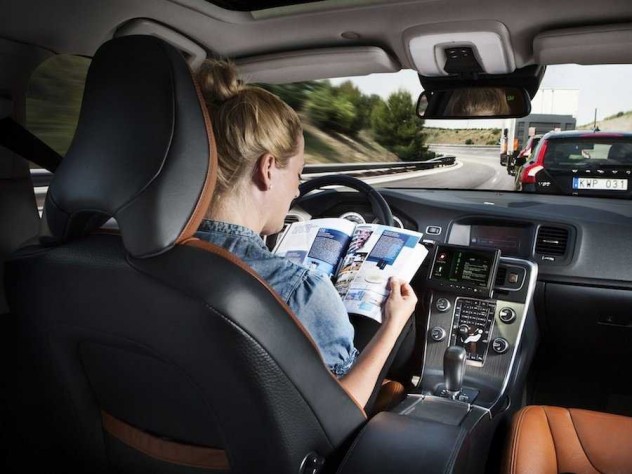 This project, dubbed Homunculus, seems a little silly on the surface. However, it’s also one of the first experiments of its kind to attempt to merge a human with a vehicle, and the implications could potentially change the way we communicate with our cars. As the researchers put it, “We propose the situation that humans and vehicles can be unified as one unit.”

The current approach with Homunculus is geared toward pedestrian safety. For example, an onboard camera tracks the driver’s head movements, while a pair of eyes attached to the front of the car copies those movements. This allows a pedestrian to see if the driver is looking at them. Strips of infrared sensors on the sides of the car connect to two vibrating motors on the driver’s arms, signaling when something (a small child, for instance) is close to the car. 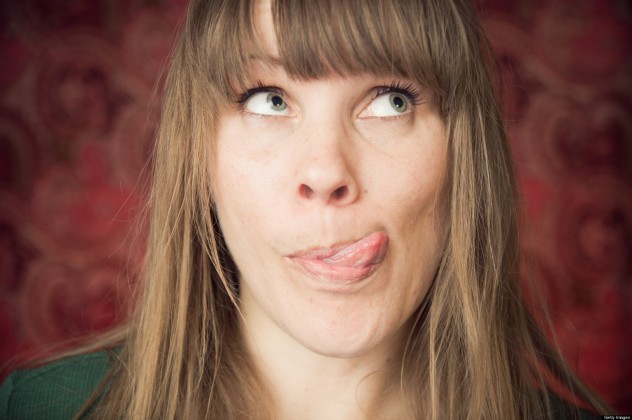 If you’ve seen the The Matrix, you might remember when one of the characters comments about how the machines couldn’t figure out what chicken tasted like—and that’s why everything tastes like chicken. It’s a throwaway joke, but if you think about it, how would you break down the elements of something as abstract as “flavor,” and reproduce them at will?

That’s the question Hiromi Nakamura and Homei Miyashita have been tackling for the past two years, and they have successfully managed to change the flavor of food at the flick of a switch with electric currents. Their goal is to use artificial taste sensation to enhance the realism of virtual reality simulators. In other words, if you’re using a virtual reality headset and you go through the motions of eating a piece of cake, a tiny device attached to your tongue will produce the right type of current to make you literally taste the cake.

Their second goal is to develop something like an electric straw, which you can program to deliver the taste you want—no matter what you’re drinking. It’s not unrealistic to see that technology evolve into a tongue implant that lets you choose what you want to taste. 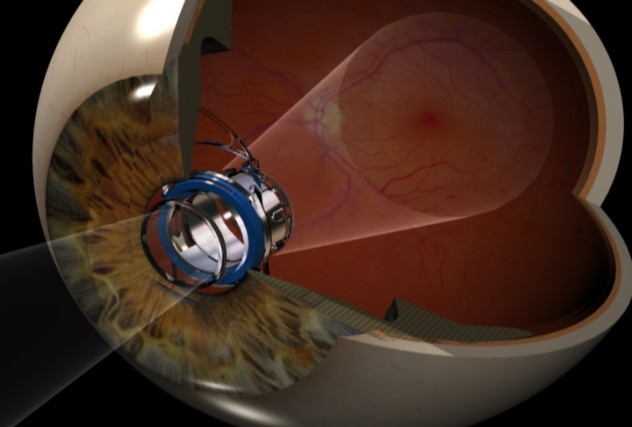 “Superpower” is a term that shouldn’t be thrown around lightly, but that might be the only way to describe a contact lens that’s being tested at the Swiss Federal Institute of Technology. Using a liquid crystal shutter embedded in the contact lens, a person wearing it would be able to instantly switch between normal vision and 2.8x magnification, giving them telescopic vision on demand.

And surprisingly, it works. The contact lens was already tested on a life-size model of an eye, and the technology was put into a modified pair of 3-D glasses to test on a real human. The only hurdle the team is facing right now is putting the liquid crystal shutter onto a softer plastic, like the kind used in most contact lenses today. In true cyborg fashion, the lens has been dubbed the “Terminator Lens.” 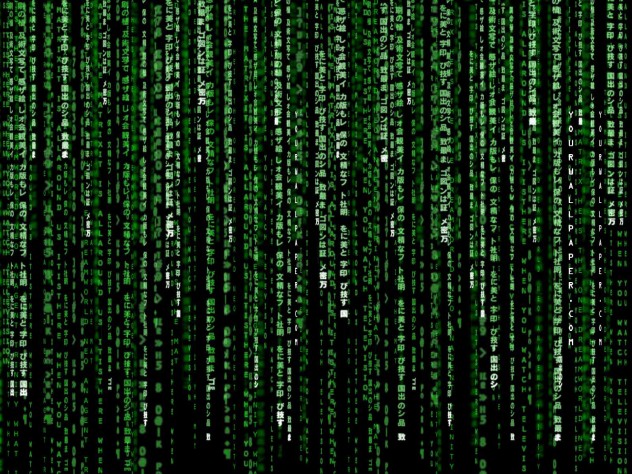 The Parasitic Humanoid, developed by a team at Osaka University in Japan, turns the previously mentioned force feedback into the ultimate tool for skill transmission. Basically, the device is worn on the head, and sensors spread out to the different parts of the wearer’s body. As the person goes through the motions of an activity, the computer learns what the proper movements should be. Eventually, it’s able to “teach” those motions to someone else using force feedback.

In this video, two of the Parasitic Humanoids are being used simultaneously. One is attached to an expert, and it’s connected to a second parasite on another person. The second person can feel—as well as see—what the expert is doing and seeing, allowing them to copy a complex skill without any formal training. As the system improves, the researchers plan to use a single parasite that’s already been programmed with the desired skill. In the relatively near future, you might be able to buy a Parasitic Humanoid, download any skill, and learn it almost immediately.