There is nothing more American than a hamburger (despite being named after a city in Germany). A fast-food staple, the burger has enjoyed a renaissance of late, being embraced by celebrity chefs like Bobby Flay, who recently began opening Bobby’s Burger Palace restaurants throughout the northeastern US. And why shouldn’t the hamburger be a big deal? It’s delicious.

10 The World’s Most Expensive Burger 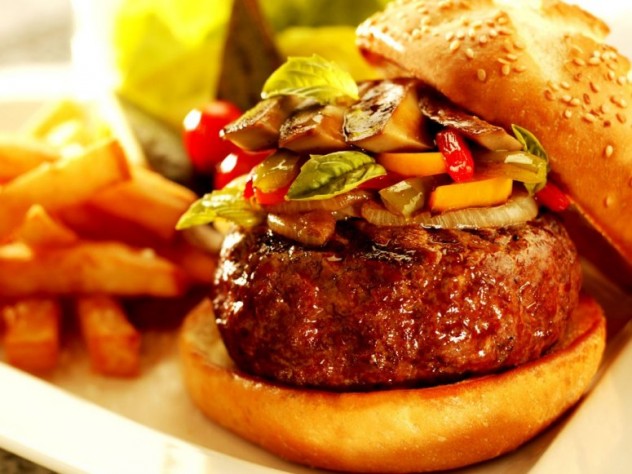 Hamburgers don’t tend to be big-ticket items. You can typically get one with fries and a Coke for under $10 at a fast-food place. But some elite restaurants have turned the convention of a cheap burger on its head, using such ingredients as lobster tails, foie gras, and even barbecue sauce made with Kopi Luwak coffee beans (where the beans have first been eaten and then excreted by a civet).

While these establishments are constantly vying over who has the most expensive burger (some of which cost several hundred dollars), it is not likely anyone will soon be beating out the $10,000 USocial.net anniversary burger. Nothing less than a culinary work of art, the burger, which was sold for charity, featured Wagyu beef, truffles, and 24-karat gold leaf. Arguably its most compelling element was sliced Spanish jamón ibérico, made from black Iberian pigs fed a specialty diet composed almost entirely of acorns. 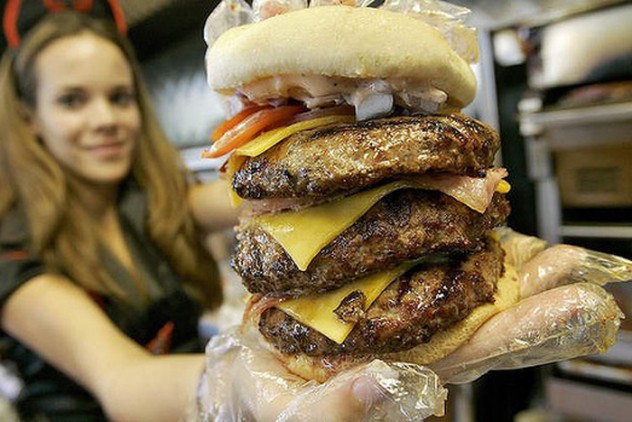 Certainly, no one would classify hamburgers as a health food, and dietary wisdom dictates that a serving of meat should be about three ounces, or the size of a deck of cards. But one restaurant in Las Vegas, Nevada, shuns such conventions. Offering up what the founder calls “nutritional pornography,” the Heart Attack Grill’s menu includes such cardiovascularly destructive fare as butterfat milkshakes and fries cooked in pure lard. Their signature Quadruple Bypass Burger has been recognized by Guinness World Records as the world’s most calorific burger. The Quadruple Bypass consists of four half-pound hamburgers, three tablespoons of lard, 20 slices of bacon, eight slices of American cheese, 20 slices of caramelized onion baked in lard, eight tomato slices, one tablespoon of mayonnaise, two tablespoons of ketchup, one tablespoon of mustard, and a bun. It contains a staggering 9,982 calories.

The restaurant has a whole tongue-in-cheek hospital motif, with buxom, scantily clad “nurses” acting as waitresses. Diners who weigh more than 350 pounds eat for free. Should you fail to devour your burger in its entirety, the nurses will gleefully paddle your behind.

Unfortunately, patrons of the grill have actually succumbed to cardiac arrest, including unofficial spokesman John Alleman, a daily customer who died of a heart attack at a bus stop in front of the restaurant. Another spokesman, 29-year-old, 6-foot-eight, 575-pound Blair River, died in 2011 of pneumonia, and his death was likely tied to his obesity. Despite these tragedies, the Heart Attack Grill continues to do incredible business in Sin City, and the restaurant has been featured on several food- and travel-related programs. 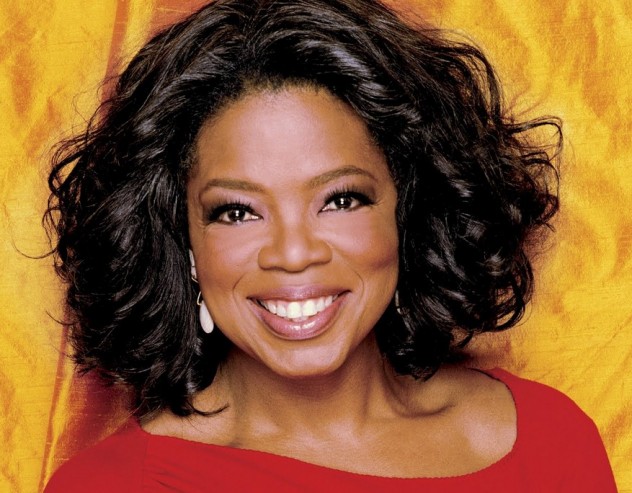 Virtually no one without control of a standing army and a thermonuclear arsenal has held more sway over our culture than Oprah Winfrey. The so-called “Oprah Effect” has impacted entire industries. In 1996, when she began an Oprah’s Book Club segment, every novel she chose instantly rocketed up the bestseller lists. Another show in 1996 brought her even more infamy.

During a segment about the beef industry, she claimed that she would never eat another hamburger. Beef prices immediately plunged, hitting a 10-year low after two weeks. A group of Texas cattle ranchers sued Winfrey for $10.3 million on the basis of a strange agriculture defamation precedent. In 2002, after four years of litigation, a US District Judge finally threw out all charges against the talk show maven. Perhaps the worst part of the scandal was the emergence of Oprah’s guru, Dr. Phil McGraw, who currently hosts his own show giving out tedious, homespun advice. In an interview after the trial, she claimed that she was still “off burgers.” 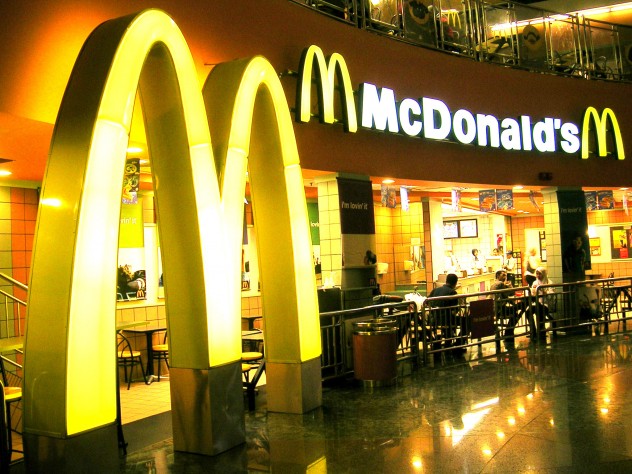 The United States’ largest purchaser of beef, McDonald’s, is synonymous with the hamburger. Of course, the company’s vast holdings are less a result of its delicious food than its marketing genius. One such scheme was their Monopoly game. Game pieces affixed to food and drink would either win customers items like free food, or could be collected to win grand prizes like cars and cash. The contest was run by a third-party company called Simon Marketing, whose security chief, Jerome P. Jacobson, skimmed the game pieces for all the best prizes for years. The pieces were redeemed by a large group of associates who would split the proceeds among themselves. Twenty-one employees of Simon Marketing were indicted in 2001 for their role in the scam, which netted them some $24 million.

Perhaps the only good thing to come out of the Monopoly scandal was in 1995, when Jacobson sent a game piece worth $1 million to St. Jude’s Children’s Hospital. Likely realizing that whoever redeemed this prize would be subject to intense scrutiny, he passed it along. Although transferring game pieces was against the rules of the contest, McDonald’s agreed to pay out the prize to the hospital, which treats children with cancer. When it was revealed years later that this was part of Simon Marketing’s scheme, McDonald’s told St. Jude’s that they had no intention of asking for their money back.

While auditing procedures are likely far more strict these days, your chances of winning much more than a free burger playing the McDonald’s Monopoly game are more dismal than you can imagine. According to the company’s website, your odds of winning the $1 million grand prize are approximately one in 3,050,412,898. 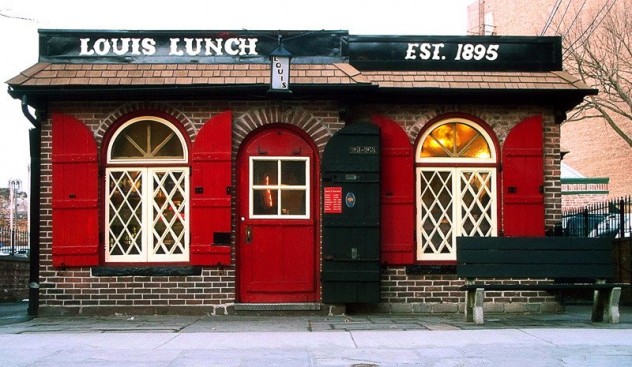 The hamburger is actually a far more recent invention than most realize. While countless culinary innovators take credit for creating the burger, perhaps the most likely candidate was New Haven, Connecticut lunch-cart operator Louis Lassen. As the story goes, in 1900, Lassen served a ground beef sandwich to a worker on the go, giving rise to the hamburger. The Lassen family is continuing the tradition 113 years later. At Louis’ Lunch, the burgers are cooked in vertical cast-iron gas stoves and served on plain bread; the only condiments available are cheese spread, tomatoes, and onions. Ingredients such as ketchup, mustard, and mayonnaise are strictly forbidden. According to the owners, students from nearby Yale University are often caught trying to smuggle ketchup into the grill. They are politely asked to leave. Veggie burgers are readily available in fast-food franchises in many parts of the world, particularly places like India, which has a large Hindu (who don’t eat beef) and Muslim (who don’t eat pork) population. You can’t even get a hamburger at a McDonald’s in India.

Unfortunately, there is some evidence that veggie burgers aren’t nearly as healthy an alternative to beef as they are made out to be. The soy that is used in veggie burgers is often made with hexane, an air pollutant that is the by-product of refining gasoline. The hexane persists into the food, and it can be bad news. In 2010, a worker at an Apple factory died of hexane poisoning while using the substance to clean touchscreens. 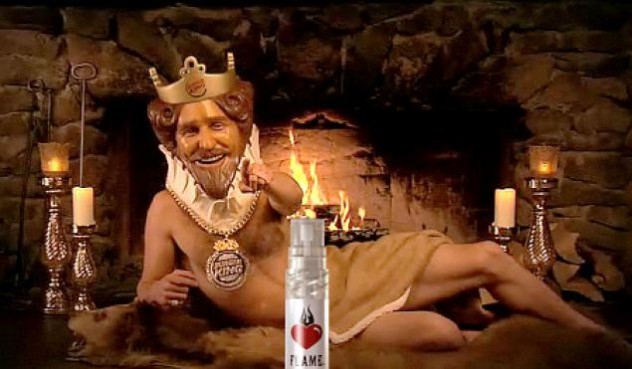 Even when the fragrance aims to be appealing, perfumes can contain some pretty vile ingredients. Examples include ambergris, a waxy digestive secretion of the sperm whale; castoreum, which comes from a beaver’s anal glands; and hyraceum, which is petrified rock hyrax poop. In 2008, fast-food giant Burger King unveiled their very own fragrance. Dubbed “Flame,” it was marketed as “the scent of seduction with a hint of flame-broiled meat.” The Flame cologne has its very own website, and is available for about $4. Strangely enough, Burger King is not the only restaurant in the cologne business. Pizza Hut also marketed a scent based on fresh-baked pizza dough and herbs. 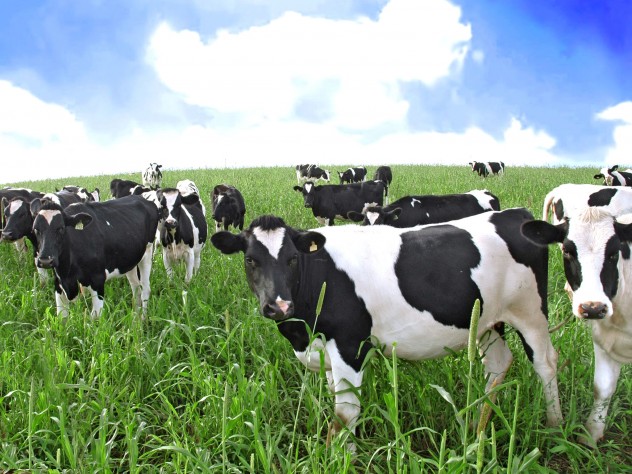 Most people probably don’t like to meditate extensively on where their meat comes from. Even the most humane butchering is pretty grotesque. The cow is first stunned (in the past, a sledgehammer was used, but today processing plants generally use captive bolt pistols—the weapon used by Anton Chigurh in No Country for Old Men) and then suspended by its rear legs. Its throat is slashed and it is allowed to bleed out. Beef is too tough to eat fresh and requires tenderizing, or, for the less genteel, controlled rotting.

While your steak probably comes from a single animal (although there are methods of “gluing” even the most prime cuts together), the ground beef used in hamburgers comes from the toughest and least appetizing portions of the cow. These are mixed communally so that the average four-ounce hamburger you get at a fast-food franchise has, according to one study done in 1998, at least 55 different cows mixed into it. They discovered samples with over 1,000 different cows mixed into a single hamburger. This is particularly concerning because such a cross section of animals vastly increases your chances of contracting a foodborne illness like E. coli. 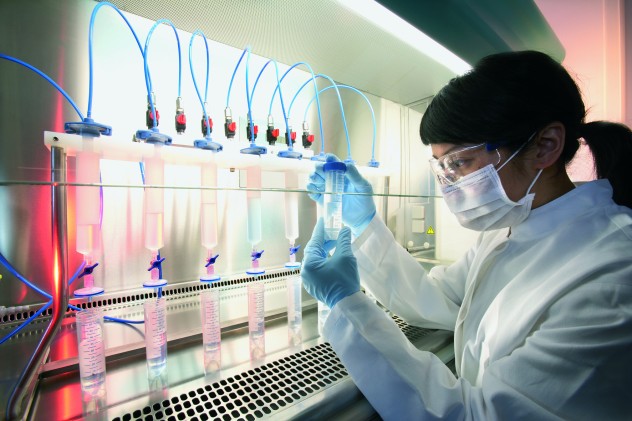 Many vegetarians make their decision not to eat meat based solely on ethics rather than any disdain for the flavor. The growing of meat in laboratories would certainly alleviate these concerns, but the benefits extend beyond morals. The keeping of animals for meat is an enormous strain on the environment, and with the global population skyrocketing, the demand continues to grow. According to a report published by Stanford University, livestock production occupies more than one-fourth of Earth’s land, and contributes to 18 percent of greenhouse gas emissions attacking the atmosphere. Recent experiments using stem cells from pigs and cows, cultured in a nutrient-rich bath that allows them to grow, have shown much promise.

The burger program is headed up by Dr. Mark Post at Maastricht University in the Netherlands. He has cultivated beef in a laboratory, using thousands of strands and layers stacked together to form a five-ounce burger. Post uses Velcro to flex and “exercise” each strand of muscle to prevent it from wasting away. Although the meat doesn’t contain any fat (which gives beef much of its flavor), Post claims that it “tastes reasonably good.” On August 5, 2013, Dr. Post plans on serving up the results of his experiment to attendees at a London event. For a mere $325,000, you too can taste history in the making. Of course, the implications of this technology far exceed usage in food. One day, it might soon be possible to grow healthy organs or even replacement limbs in laboratories. However, perfecting this technology is sure to be an uphill climb; as with the use of human stem cells, a great deal of fundamentalists will surely call foul in “playing God.” 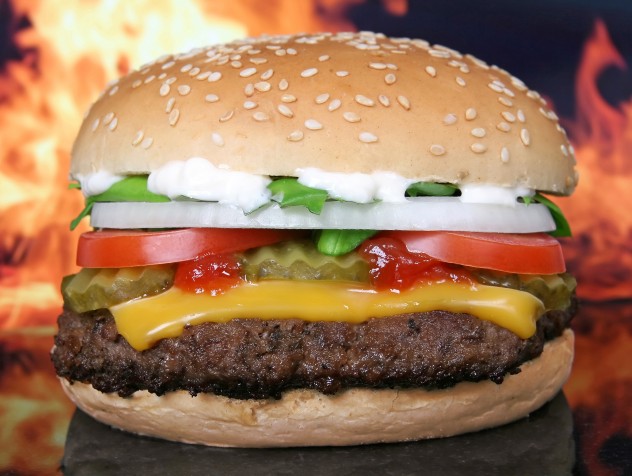 A frequent “experiment” conducted by fast-food critics involves taking a plain hamburger and allowing it to sit out in the open. Astonishingly, even after weeks, the burger doesn’t rot and looks much the same as the day it was cooked. The ostensible conclusion is that the burgers are riddled with such excessive preservatives that they cannot decompose. Surely, anything potent enough to prevent decay for months at a time must have horrifying effects on human organs.

The truth is a little more pedestrian (and certainly friendlier to your liver). Burgers under a certain weight will dehydrate before they can begin to rot or grow mold. Larger burgers, such as McDonald’s Quarter Pounder, generally begin to exhibit a fur of mold before they fully dry out. This experiment can be easily duplicated at home using a control group of homemade burgers, though a collection of mummified sandwiches might turn off houseguests.

Mike Devlin is an aspiring novelist