From the Shore Temple of India to the eerie bronze figures lining the floor of the Bay of Naples, the vast waters of this planet are littered with the salt-encrusted remnants of ancient civilizations. Each submerged ruin we stumble across is a reminder that as powerful as our cities and kingdoms may be, they don’t hold a candle to the fierce, merciless power of the sea. 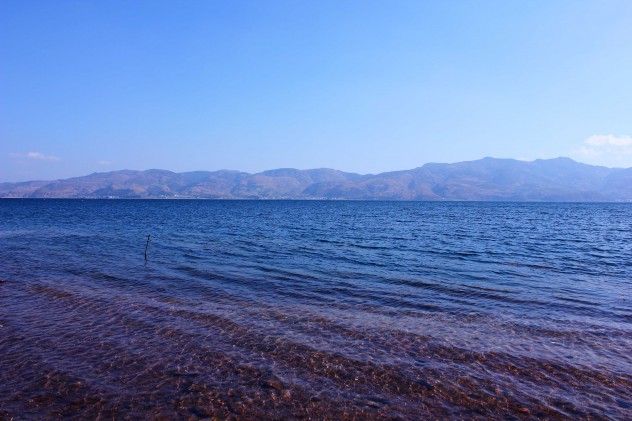 In 2001, a team of archaeologists working at Fuxian Lake in China discovered a vast collection of underwater buildings at the bottom of the lake. Locals had often claimed to be able to see a ghostlike city beneath the waters on a calm day, and over the years, the stories became something of a local legend. On subsequent diving trips, the archaeologists found standing walls, streets paved with flagstones, and the ruins of an entire city spread across 6.5 square kilometers (2.5 sq. mi).

After carbon dating several earthenware pots, it was determined that the ruin was close to 1,750 years old. It’s believed that an entire section of the city simply broke off and slid into the lake, where it’s been preserved for all these years.

Discover an underwater city yourself with a PROMATE Snorkeling Gear Set at Amazon.com! 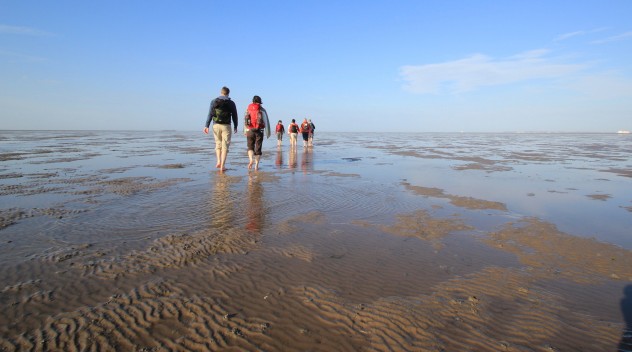 The Wadden Sea is a large body of water that runs along the northwest border of Germany. In the Wadden Sea, there’s a narrow strip of islands called the North Frisian Islands, which are being eroded away by the tides that batter the German coast. They’re growing smaller every day, and at least one of those islands (Sylt) used to be around 300 meters (1,000 ft) wider than it is now. We know this because a few hundred meters off the current coastline is the underwater settlement of Eidum.

It’s believed that Eidum was built sometime in the 1300s and then built again . . . and again . . . and again. Due to its location, Eidum had a tendency to take the full brunt of the North Sea, which would periodically destroy the town. In 1436, the All Saints’ Day Flood completely devastated the area, killing 180 people and forcing the coastal inhabitants to move to higher ground. There they set up a new settlement that became modern-day Westerland, which is now a beach. According to this German account from the 1800s, the remains of Eidum were still visible hundreds of years later at low tide. 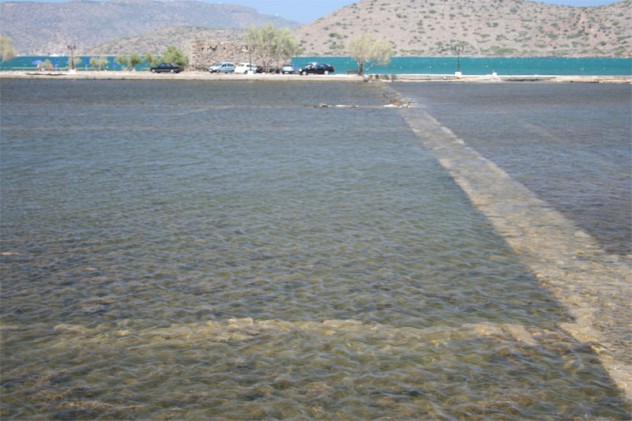 Crete is an island off the coast of Greece in the Mediterranean Sea, and the ancient geography of Crete was much larger than its present-day counterpart. Due to the erosion of the sea (and more than one earthquake), sections of the island have plunged into the sea, and Crete has become a fairly large tourist destination for viewing the submerged ruins of cities and structures.

One of those is the city-state of Olous, which was once a thriving city with close to 40,000 inhabitants. While it paralleled the other Greek cities of the time in terms of industry, trading, and architecture, Olous had one tragic flaw—it was built on a sandy shoreline, rather than the limestone foundation of most other cities on the island. These days, the remains of Olous are easily accessible to scuba divers and snorkelers in the Poros Bay. The most notable is the ancient city wall that still rises above the water line at low tide. 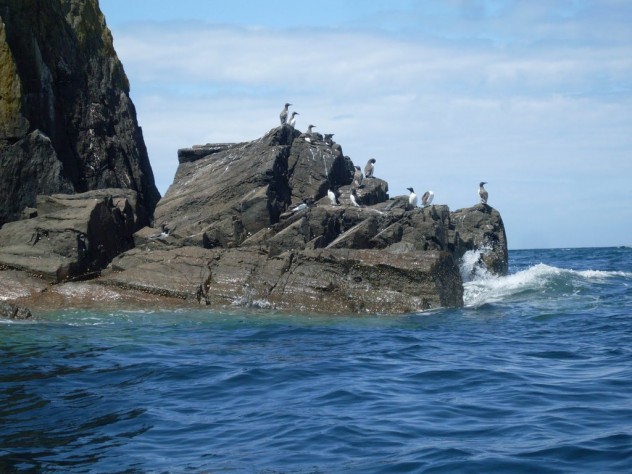 Legend tells of a Welsh prince (named Helig ap Glanawg) who built a massive palace in the north of Wales during the sixth century. According to the stories, his kingdom stretched across the area that is now Conwy Bay. After the palace was built, a storm struck and the sea flooded the area, submerging the palace and everything around it.

To this day, the story is chalked up to myth, and there are contradicting opinions about a land ridge about three kilometers (two miles) off the coastline. The ridge is called Llys Helig (Welsh for Helig Palace), and many people believe it marks the spot of the fabled palace of the prince, while others say that it’s a natural rock formation. However, some geographical surveys have discovered a submerged wall that runs through the area near the Llys, which might date to the sixth century. 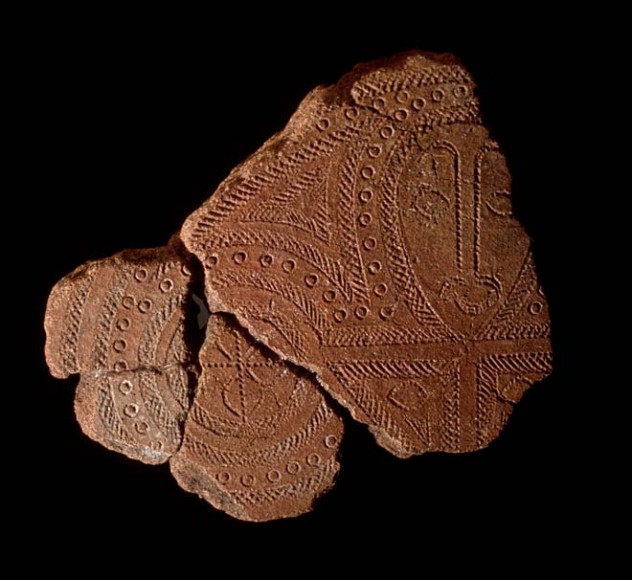 Mulifanua is a tiny village perched on the northernmost tip of Upolu, an island of Samoa. It’s mainly used as a ferry station for the ferry that runs to Savai’i, the island to the north. It was while expanding this ferry line in the ’70s that workers discovered thousands of pottery shards littering the sea floor.

Subsequent archaeological investigations showed that the shards were the remains of a Lapita village—possibly one of the largest in the region. The Lapita were an ancient culture, believed to have branched out into the modern-day people that inhabit Micronesia and Polynesia. The village discovered at Mulifanua Bay was one of the most advanced Lapita settlements, which we know because this is the only dig site where decorated pottery has been found. It’s also the oldest one we know of. The pottery has been dated to about 800 B.C.—500 years older than other sites. 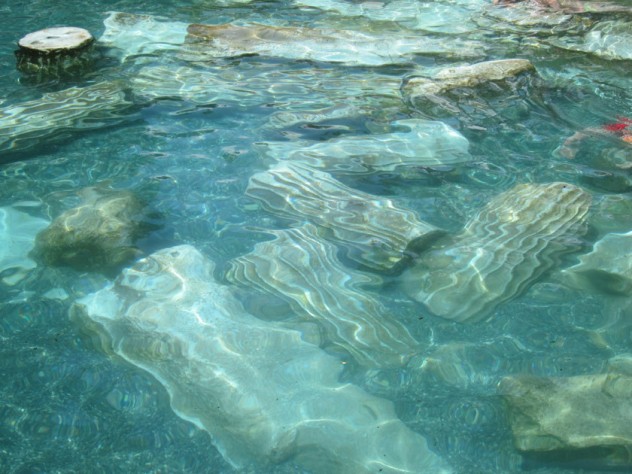 Immortalized in dozens of works of fiction, the Peloponnesian War took place in the fifth century B.C. between the city-state of Athens and various armies of the Peloponnese, who called themselves the Peloponnesian League. The war lasted nearly 30 years, raging across the Aegean Sea and the northern Mediterranean. One of the cities involved in the war was Pheia, which was conquered by the Athenians and turned into a shipping headquarters for its military supply line.

Near the close of the fifth century, the area along the western coast of Greece was shaken by an earthquake that plunged the city of Pheia five meters (16 ft) below the surface of the Mediterranean. The city was lost until 1911, when an excavation team found the ancient civilization. Since then, numerous archaeologists have studied the city. Despite the global interest in the Pheia ruins, we still don’t know much about this important fragment of history.

Learn more about the war in which this underwater city played a role! Buy A War Like No Other: How the Athenians and Spartans Fought the Peloponnesian War at Amazon.com! 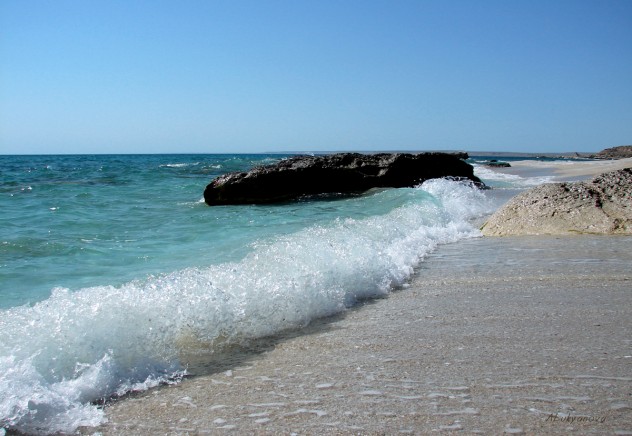 The Khazars were an ancient race of nomads that lived and traveled throughout the mountainous regions of Southeast Asia during the eighth century A.D., and after the Second Arab-Khazar War, they claimed the small port city of Atil as the capital of their empire. Known as Khamlij in Arab texts, Atil became a major stopping point along the Silk Road. Partially due to the trade routes passing through it, Atil created something of a cultural melting pot and became the common home of Christians, Jews, and Muslims.

But sometime during the end of the 900s, disaster struck. Prince Svyatoslav I of Kiev attacked the enormously wealthy city and left it in ruins—ruins that remained lost for over a millennium. Because of its position on the Caspian Sea, it was believed that the city’s remains were swept away, but in 2008, a Russian professor named Dmitry Vasilyev discovered the remains of eighth-century ruins along the northern lip of the Caspian Sea. The discovery has tentatively been named as the ruins of Atil, although they are still searching for Khazar writings to confirm it. 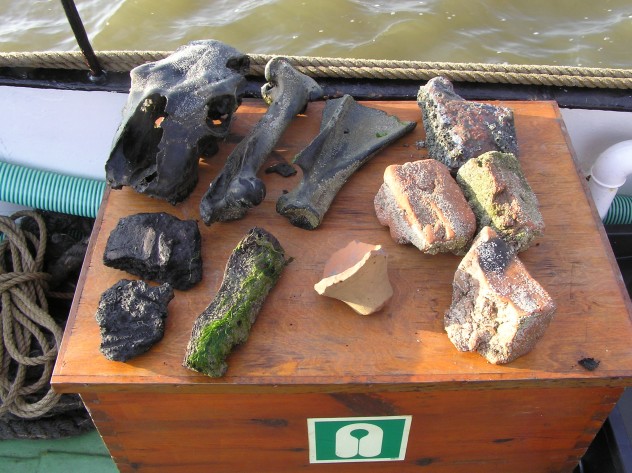 Sometimes, an island town is slowly pulled into the sea by the erosion of the tides. Other times, the entire island drops into the ocean without a trace. That was the case with the island of Strand, located in the North Sea, which was demolished by a storm tide in the early 1600s. Since the island itself is no longer around, apart from a few fragmented islets, it’s been rather difficult to locate island’s only city—Rungholt.

In 1362, the North Sea experienced the legendary Grote Mandrenke—a massive Atlantic storm surge that swept across the coasts of England, Germany, and the Netherlands. With an estimated death toll of 25,000 people, the storm also wiped Rungholt off the map. For the next 700 years, divers found relics from Rungholt on the sea floor, but the city itself has never been found. 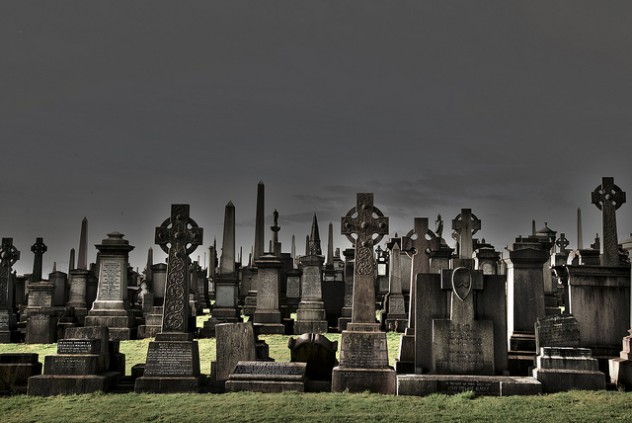 At the height of their civilization, the Greeks were spread out across most of the Mediterranean Sea. But what many people don’t know is that they extended into modern-day Russia. The Greek empire spread its fingers along the northern rim of the Black Sea and founded over a dozen port cities on the borders of Romania, Bulgaria, and the Ukraine. One of these was Phanagoria, located on the Taman Peninsula.

The history (and legend) of Phanagoria is actually what allowed archaeologists to figure out which Greek city they were dealing with after its discovery. According to history, Panagoria was invaded by Mithridates VI, king of the rival Pontus Empire, in the first century B.C. The Panagorians, unhappy about this turn of events, sided with the Roman Empire to kick out the invading king and sparked the 25-year-long Mithridatic Wars.

When an underwater excavation team explored the ruined city in 2011, they discovered a massive marble tombstone, which had the following inscription: “Hypsikrates, Wife of King Mithridates Eupator Dionysos, Farewell.” In the part of the city that’s on land, there’s a vast necropolis, or city of tombs. It’s estimated that there are thousands of sarcophagi in the Phanagoria city of the dead.

The Dutch city of Saeftinghe has had a rough history—to say the least. In the 1200s, a wide swath of swampland was drained to provide more arable land for crops and livestock. For several hundred years, that region became extremely prosperous. Unfortunately, in 1570, a massive flood wiped out all the land surrounding Saeftinghe.

The city itself miraculously survived the flood, but less than 15 years later, the Dutch themselves committed Saeftinghe to a watery grave by destroying a dike during the 80 Years War. Now, the Saeftinghe region is a quagmire, a vast area of swampland, salt marshes, and sandy deltas that stretches across 3,850 hectares. There have been several attempts to excavate the lost city, but none have been successful. There are guided tours that take visitors near the region, but it’s forbidden to enter the “Drowned Land of Saeftinghe” without a guide because the tide often surges thousands of feet inland in a matter of minutes, covering the land in a deep layer of water.