Everyone loves dolphins. They’re intelligent, inquisitive, playful creatures who have captivated people since the dawn of time. But dolphins didn’t get to be everyone’s favorite aquatic mammal just by lounging around all day. Having to adapt to life in the harsh ocean environment requires some serious skills. As a result dolphins, have developed some incredible abilities that continue to amaze researchers. 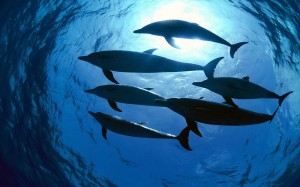 Everything needs sleep. The human world record holder, Randy Gardner, stayed awake for 11 days straight. By the fourth day, he was hallucinating. Not sleeping will eventually kill you and every other mortal creature with higher brain functions—except dolphins, which have apparently found a way around sleep. Baby dolphins actually forgo sleep for the first month of life—and so, therefore, do their parents.

The trick is that these amazing sea critters can shut half of their brain off at a time. Scientists tested dolphin reactions without rest for five days straight and their reaction time never slowed. Blood tests for signs of stress or sleep deprivation turned up negative. Dolphins may be able to do this indefinitely.

Another study showed that dolphins can use their sonar for 15 days straight with almost perfect accuracy. It makes sense that dolphins evolved a way to keep an eye out for predators while they’re dozing in the open ocean. But the truly fascinating part about all of this is that tests showed visual information was being passed from the snoozing side to the active side. Even though they shut down half of their noggin at a time, the other half can take over all the functions. It’s almost as if they have two brains. 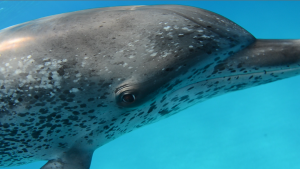 Everyone knows about dolphins and sonar. With those trademark clicks and squeaks they use sound to perceive the world around them. You would think that would mean their other faculties would be diminished. But in fact, they have better eyesight than we do. To start, dolphins have an eye on each side of their head, which gives them a panoramic visual range of 300 degrees. They can see behind themselves, and each eye can move independently of the other, meaning they can look two different directions at the same time. They also have a reflective layer of cells just behind the retina called the tapetem lucidem. This helps them to see exceptionally well in low light. And as if all of that wasn’t enough, dolphins can see just as well out of the water as in it. 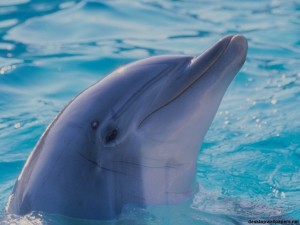 Why aren’t dolphins covered in barnacles? Whales are coated in the things, but the dolphin family seem to be immune. Look at Flipper or Shamu (killer whales are just big dolphins by the way): They’re clean and glassy smooth. So what’s their secret? Super skin.

Dolphin’s unique skin gives them all kinds of advantages. To start, while their epidermis is no tougher than ours, it is about 10 to 20 times thicker than any land animal. It also grows about nine times faster than ours. An entire layer of skin is replaced every two hours. This rapid skin regeneration helps to keep dolphins smooth, silky, and hydrodynamic. Dolphins also have microscopic ripples in their skin, which help them travel faster through the water and prevent parasites from grabbing hold. But the real secret of why dolphins are so clean is that they secrete a special gel, which resists the mucus that barnacles and their ilk cling on with. So dolphins are covered in some sort of natural glue solvent. Even if something does find a way to latch on, this dolphin grease also contains enzymes that attack parasites. 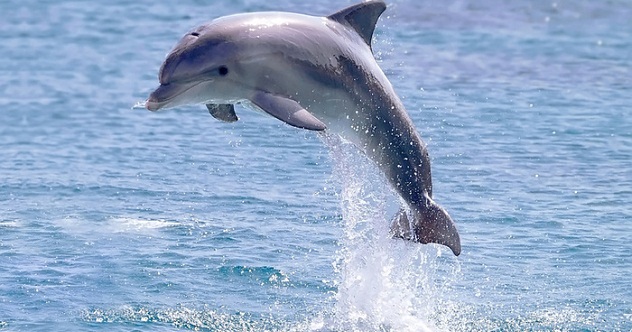 It turns out that dolphins are pretty good swimmers. The bottlenose can hold its breath for 12 minutes and dive nearly 550 meters (1800 ft). Part of the reason dolphins can do this is because they’ve got incredible lungs. Though they aren’t much bigger than our own, they’re much more efficient. With each breath, a dolphin exchanges 80 percent or more of its lung air. We puny humans can only get out about 17 percent. Their blood and muscles can store and transport more of that oxygen, too. This is because they have more red blood cells, which in turn have greater concentrations of hemoglobin than we do.

But this still doesn’t fully explain how dolphins can hold their breath for so long and dive so deep. To accomplish this feat, they can also restrict where their blood circulates. During long dives, blood is shunted away from the extremities and sent to the heart and brain. All nonessential tissues are cut off and forced to rely on their own internal supplies. 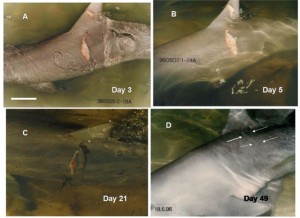 Dolphin healing is pretty much impossible. Seriously, scientific opinion can be summed up as “its healing is almost alien compared to what we are capable of.” They’ve been known to survive wounds the size of basketballs, and they will regrow that huge chunk of flesh in a couple of weeks, actually returning to the original contours instead of leaving a gaping scar. They don’t just heal, they regenerate. Their recuperative abilities have been likened to fetuses in the womb. But besides Wolverine-esque recovery skills, dolphins don’t bleed out either. Typically, when someone takes a shovelful of flesh out of your side you’ll hemorrhage to death. However, it’s believed dolphins use the same mechanics that enable them to dive to great depths to help them constrict blood vessels to stem the flow.

Dolphins don’t care about little inconveniences like mind-numbing agony. After receiving crippling injuries that would incapacitate just about any other creature on Earth, dolphins have been observed playing, swimming, and feeding normally. They give no outward signs of the gaping wound full of exposed nerve endings that should be screaming bloody murder. And it’s not that they don’t feel pricks and pokes. Dolphins are just as sensitive as we are. But when inflicted with a serious wound they shrug it off. It’s believed they must be able to produce natural morphine-strength painkillers . . . that are nonaddictive.

Try losing a bucket’s worth of flesh then going back to work in the morning with only your body’s natural painkillers to tide you over and see how that works out for you. Since predators go after the weak, not showing pain or distress makes evolutionary sense. If you just got a hole the size of a melon blown in you, you really don’t want to advertise that fact to any sharks that might be lurking nearby. 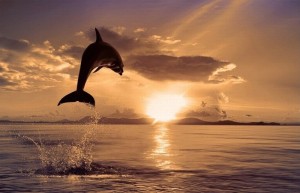 In 1936, famed British zoologist Sir James Gray was amazed by how fast dolphins could swim. He’d studied their anatomy extensively and the best he could guess at was that dolphin skin had to have some sort of magical anti-drag properties. This was known as “Gray’s paradox,” and it wasn’t officially solved until 2008.

Gray wasn’t completely wrong—dolphins do have anti-drag properties, but he grossly underestimated the power that a dolphin’s muscles produce. Olympic swimmers can produce about 60 or 70 pounds of thrust in the water. A dolphin moving at average speed hits 200. Swimming at full tilt, these aquatic speed demons can produce 300 to 400 pounds of thrust. That’s over five times what the most physically fit person on earth can do. And dolphins are extremely energy efficient, too. A human can only convert about four percent of their energy into forward momentum in the water. Dolphins, on the other hand, can turn 80 percent of their energy into thrust, making them some of the most efficient swimmers in the ocean. 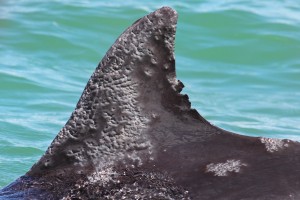 Dolphins are able to swim with open wounds in the bacteria-riddled ocean and not die of infection. And the incredibly filthy teeth of sharks don’t bother them much either. Without hospitalization, humans would die of sepsis within a few days of a shark bite . But dolphins seem to do just fine. In fact, they won’t get any infection at all, which has been described as no less than “miraculous.” And yet dolphins have an immune system similar to ours, so how have they acquired this super resilience?

Well, no one really knows. The best guess that science has is that dolphins have managed to siphon off antibiotics made by plankton and algae. Chemicals produced by these microscopic creatures have been found in dolphin blubber. As the blubber decomposes at the site of the wound, it gives off these natural antibacterial substances. How they can store these lifesaving chemicals just under their skin instead of metabolizing or excreting them is still a mystery. 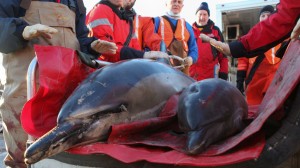 Why do dolphins and whales strand themselves on beaches? It’s a mystery that has confounded researchers for years. Theories include some strange disease, pollution, or military sonar testing. But autopsies have not produced a smoking gun. And when you take into account that strandings have been recorded for hundreds of years, it probably rules out humans as the cause. Now, some researchers are beginning to suspect that it’s all the sun’s fault.

Dolphins and whales have magnetite crystals in their brain to help them sense the magnetic field of the earth. With this built-in GPS, they can navigate the featureless oceans with ease. One group of researchers plotted stranding spots along the US East Coast and found that they coincided with places where local magnetic rock reduces the Earth’s magnetic field. So a deep-sea dolphin or whale that depends on its magnetic sense might not see the shore till it’s too late. Other evidence suggests that when the sun throws too much radiation our way, it also screws up the magnetic senses of aquatic mammals. Researchers at the University of Kiel have shown that most beachings correlate with the portions of the sun’s solar cycle that produce a higher flux of radiation. This might explain why rescued dolphins and whales will often turn around and beach themselves again. 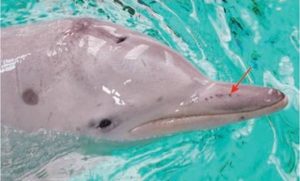 Dolphin sonar is pretty incredible. The ability to detect objects from a distance through some sort of aquatic beatboxing is just amazing. And combined with the other senses we’ve already covered, dolphins have some of the keenest senses of any animal on the planet. Yet Mother Nature isn’t done with these sea critters. They can boast one other super sense: electroreception. Dolphins can actually sense the electrical impulses given off by all living things.

Guiana dolphins live around the coast of South America and resemble the common bottlenose. Researchers discovered a depression on their rostrum (snout) that can detect electrical impulses given off by the muscles of fish. Scientists liken the sensitivity of its electroreception to that of a platypus. They probably use this ability to search for fish hiding in the mud. Sonar is great for detecting objects at a distance, but not so much when you get up close. Scientists suspect that all dolphins and even some whales may have this ability.

You can check out Monte Richard’s work on Cracked.com or you can read his blog.