The Amazon rain forest is an immense ecosystem, providing a habitat for creatures as weird and wonderful as the jaguar, the poison dart frog and the Jesus lizard. But it’s home to more than just the animals that prowl, swing, and slither through the trees. In the depths of the Amazon River, the largest river in the world, live creatures so amazing and so terrifying, that they make Jaws look like a nice, relaxing swim in the ocean. 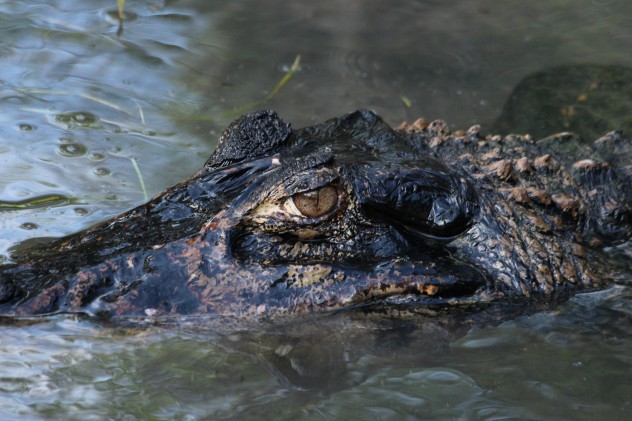 A black caiman is basically an alligator on steroids. They can grow up to six meters (20 feet) long, with bigger, heavier skulls than Nile crocodiles, and are the apex predator in the Amazonian waters. That means they are basically the kings of the river—they eat nearly anything they can get their teeth into, including piranhas, monkeys, perch, deer, and anaconda.

Oh, and yes, they totally attack humans. In 2010, a biologist named Deise Nishimura was attacked by a caiman while cleaning a fish on her houseboat, and while she managed to fight it off, it took one of her legs with it. This particular caiman had been living under her houseboat for eight months, evidently waiting for the chance to strike.

If these terrifying animals fascinate you, you can always find more in Walking the Jungle: An Adventurer’s Guide to the Amazon at Amazon.com! 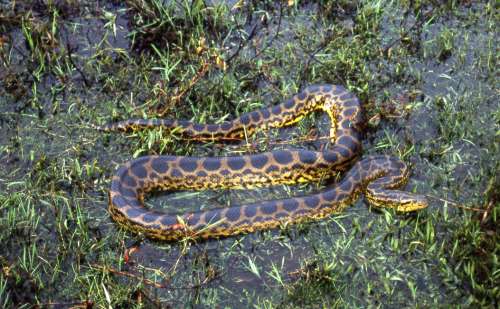 Continuing with the theme of gigantic reptiles, the largest snake in the world makes its home in the Amazon: the anaconda. While reticulated pythons are actually longer, green anaconda are far heavier; the females, generally larger than males, can reach 250 kilograms (550 lbs), grow to nine meters (over 29 feet) long and reach 30 centimeters (12 in) in diameter. They are not venomous but instead use their immense muscular power to constrict and suffocate their prey, which includes capybara, deer, caiman, and even jaguars. Preferring shallower waters that allow them to stealthily sneak up on their prey, they tend to live in offshoots of the Amazon rather than the river itself. 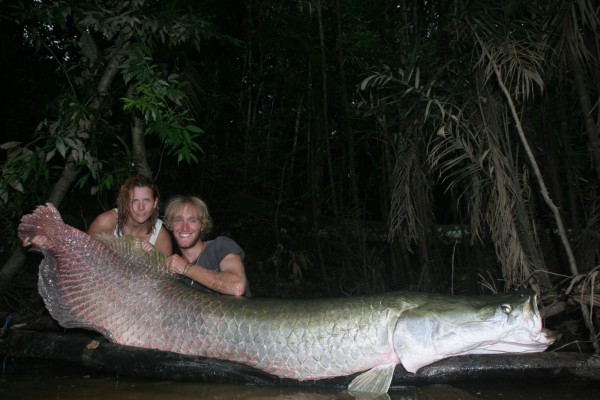 Arapaima, also known as “pirarucu” or “paiche,” are gigantic carnivorous fish that live in the Amazon and surrounding lakes. Encased in armored scales, they think nothing of living in piranha-infested waters—and they are pretty effective predators themselves, feeding on fish and the occasional bird. Arapaima tend to stay close to the surface, because they need to breathe surface air in addition to taking in oxygen through their gills, and make a distinctive coughing sound when they emerge for air. They can reach 2.7 meters (nine feet) in length and weigh up to 90 kilograms (200 lbs). These fish are so vicious that even their tongue has teeth. 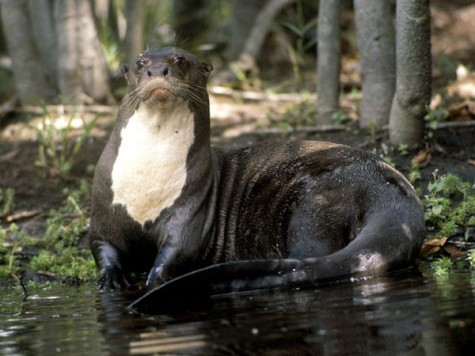 Heading up the “exactly what it says on the tin” category are the giant otters, who, as their name suggests, are very large otters. They are the longest examples of the weasel family, with adult males reaching up to two meters (over six feet) from head to tail. Their diet primarily consists of fish and crabs, which they hunt in family groups of three to eight members, and they can eat up to four kilograms (nine pounds) of seafood per day. Don’t be fooled by their cute looks, though—they are more than a match for the other animals on this list, with groups of them having been spotted killing and eating an anaconda. They hold their own against caiman as well. One family was seen devouring a 1.5 meter (five foot) caiman, which took them about 45 minutes. While their numbers are dwindling, mainly due to human intervention, they are among the most capable predators in the Amazon rain forest, hence their local name of “river wolves.” 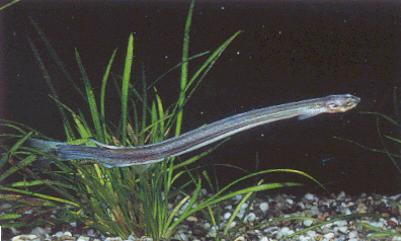 The Amazon doesn’t only breed giants, and the small creatures are just as terrifying, at least if you believe the stories that surround them. Candiru are small, parasitic, freshwater catfish famous for launching themselves up the urethra of anyone foolish enough to urinate in the river, and getting lodged into the urinary tract because of the spines that run along their backs. While documented cases are rare, and there is some debate over whether these types of injuries occur at all, there is at least one documented case of a man requiring surgery to remove a candiru from his urethra—which had also attempted to burrow through to his testicles. However, the candiru usually preys on fish, attaching themselves to the larger fish’s gills with their spines and feeding on their host’s blood. 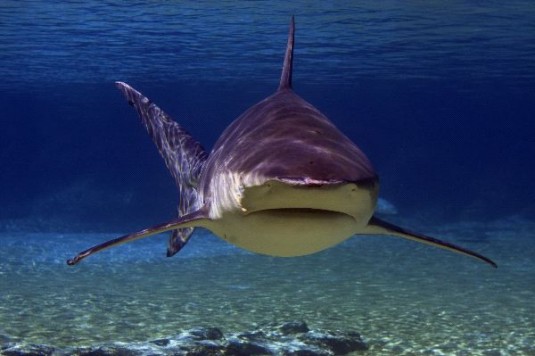 While technically ocean-dwelling saltwater animals, bull sharks are quite at home in fresh water, too—they have been found as far down the Amazon as Iquitos in Peru, almost 4,000 kilometers (2,500 mi) from the sea. They have special kidneys that can sense the change in salinity of the surrounding water and adapt accordingly. And you do not want to meet one of these in the river; it is common for them to reach 3.3 meters (11 ft) in length and there have been reports of sharks weighing 312 kilograms (690 lbs). Like many sharks, they have several rows of sharp, triangular teeth and immensely powerful jaws, with a bite force of 589 kilograms (1,300 lb). They’re also quite partial to a bit of human, being one of the most frequent attackers of people (along with tiger sharks and great whites). Combined with their habit of living near densely populated areas, this has led many experts to label them the most dangerous sharks in the world. 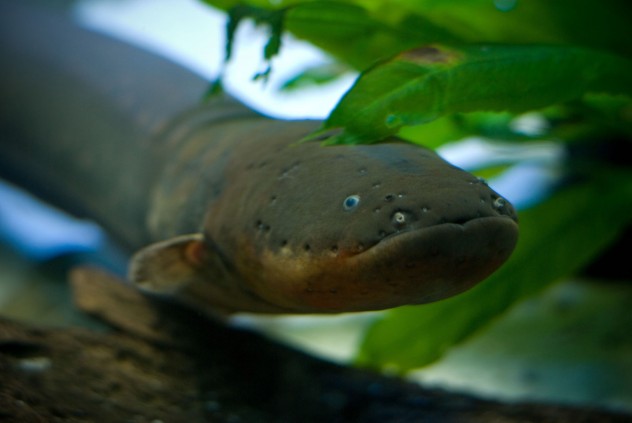 Electric eels are actually more closely related to catfish than eels, but you probably wouldn’t want to get close enough to one to find out. They can grow up to 2.5 meters (eight feet) long and can produce jolts of electricity from specialized cells called electrocytes arranged down their flanks. These charges can reach up to 600 volts, five times the charge of an average American plug socket, and enough to knock a horse off its feet. While one shock isn’t enough to kill a healthy adult human, multiple shocks can cause heart or respiratory failure, and it’s common for people to be stunned and drown after an eel attack. Many of the disappearances recorded in the region have been attributed to eels that have stunned their victims and left them to drown in the river. Luckily for our species, the eels, while carnivorous, tend to stick to eating fish, amphibians, birds, and small mammals. They locate their prey by sending out small, 10-volt shocks from their electrocyte cells, before stunning or killing them with larger shocks. 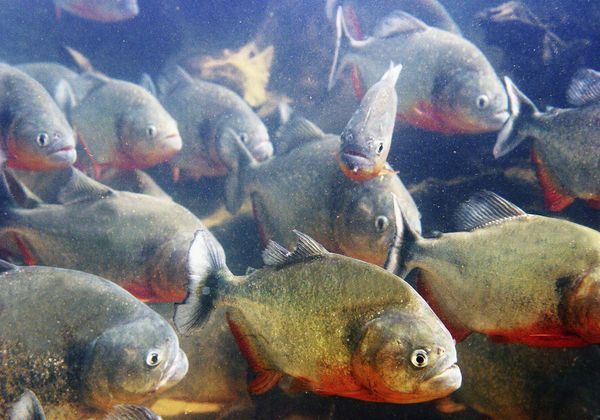 The quintessential terror of the Amazon River, so widely feared that they have inspired a number of questionable Hollywood movies, red-bellied piranhas are actually primarily scavengers. That’s not to say they won’t attack healthy creatures; after all, given that they can grow to be over 30 centimeters (12 in) long and swim around in large groups, they tend to be more than a match for most animals. Like all piranhas, red-bellies have incredibly sharp teeth, one row on each of their powerful upper and lower jaws. These teeth are interlocking, which makes them perfect for tearing and rending the flesh of their prey. Their fearsome reputation mainly comes from sights of their “feeding frenzies,” where groups of piranhas will congregate on their unlucky prey and strip it to the bone within minutes. These attacks are rare and are usually the result of starvation or provocation.

The Amazon rainforest is so large that we still haven’t explored the whole thing. Discover the people who still live there with The Unconquered: In Search of the Amazon’s Last Uncontacted Tribes at Amazon.com! 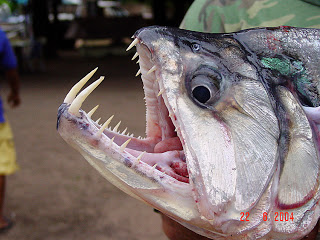 Anything with the name “vampire fish” should automatically be recognized as scary (even after Twilight), and payara are no exception. They are absolutely ferocious predators, capable of devouring fish up to half their own body size. Given that they can grow up to 1.2 meters (four feet) long, this is no mean feat. A large part of their diet is made up of piranhas, which should give you some idea of how tough these fanged fiends can be. They get their name from the two tusks that sprout from their lower jaw, which can grow up to 15 centimeters (six inches) long and which they use to literally impale their prey after viciously lunging at them. Their fangs are so big, in fact, that they have special holes in their upper jaw to avoid impaling themselves. 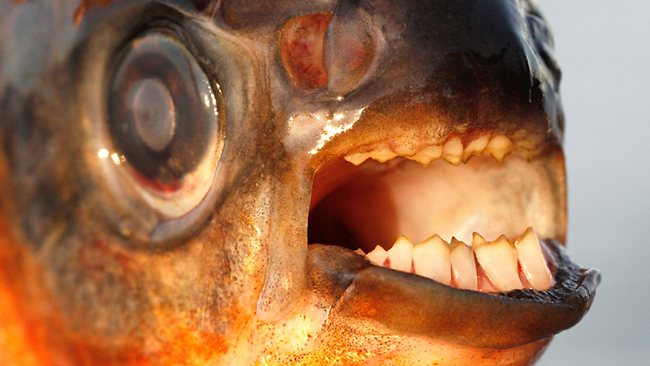 One animal certain to be far more terrifying to men than to women, the pacu is a much larger relative of the piranha, known for its distinctive, human-like teeth. Unlike most of the creatures on this list, the pacu is actually omnivorous, and a good part of its diet is comprised of fruit and nuts. Unfortunately for some pacu, “nuts” may not only mean things that drop from trees. Yes, that’s right: Pacu are alleged to have occasionally bitten off the testicles of male swimmers, with reports of men in Papua New Guinea being killed by pacu after the fish apparently mistook their genitalia for an easy snack. Oh, and don’t worry if you can’t make it to the Amazon to see these manhood-masticating monsters, because they’re already spreading into Europe.

Matthew is unemployed and writes to pretend he is useful to society. You can find his short (and sometimes funny) stories here.