Most people view snails and slugs as pests. But these slimy streakers are far removed from one-dimensional garden destroyers. They amaze scientists with their abilities, and certain individuals have become the darlings of mass media.

The slow creatures can also get a little creepy. They hide inside humans and, thanks to the military, have evolved into things that include cyborg spy snails. 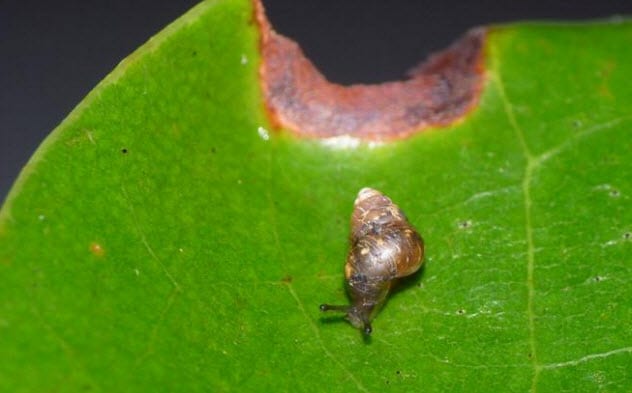 Hahajima Island of Japan is home to a fragile snail. All right, “fragile” in the sense that it is really tiny—around 0.25 centimeters (0.1 in). A thumb can easily crush Tornatellides boeningi.

When researchers recently collected bird feces on the island, they found that it contained snail shells. Oddly, some of the snails appeared to be alive. Curious, the team fed over 100 mollusks to a captive population of the two bird species known to snack on the snails.

Remarkably, around 15 percent were expelled unharmed. One snail even gave birth shortly after being pooped out. The digestive system is not a Disney ride. The snails endure a harsh journey lasting 30 minutes to two hours. Why such a good percentage appear to suffer no ill effect is a mystery.[1]

The best theories at this point?

Small equals survival. Tinier shells might be less prone to cracks and digestive juices seeping in. Tornatellides could also seal themselves away behind a mucous film that safeguards the shell’s opening.

9 Why Snail Sex Is Slow

One might be forgiven for thinking, “It is slow, because they are snails.” As garden snails are hermaphrodites, they can technically reproduce by themselves. However, they seem to prefer a partner. Each snail has eggs and sperm, seeking to both fertilize another and get fertilized at the same time.

The real reason why snails mate for up to three hours, which looks more like a cautious game than a passionate embrace, could be for their health. Researchers feel that snails do not really mind off-loading sperm but are careful about the quality of sperm they receive. Thus, they investigate the situation carefully.

If the partner is not desirable, the other might attempt to impregnate it while avoiding the unhealthy snail’s own attempts to do so. The whole dance is wrought with concentration and frustration. The complexities of snail courtship take precedence over everything, even safety. This is why mating snails are often out in the open and oblivious to their own vulnerability.[2] 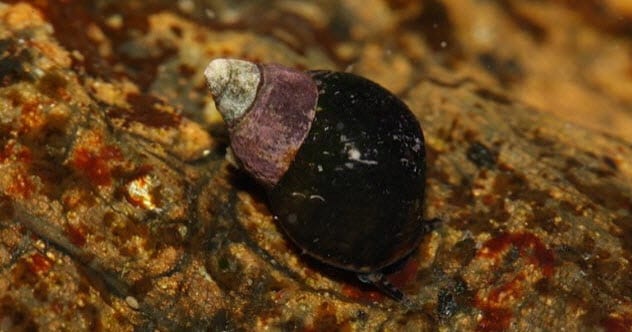 In 2018, an 11-year-old boy played inside a tide pool in California. During this time, he scraped his elbow. His parents made sure that the injury was disinfected and cleaned. However, a week after their trip to the beach, the wound still festered. They took their son to the doctor and explained that there was a tenacious blister that kept growing. The child was otherwise normal and healthy.

The medical staff decided to drain the blister, which was red and full of pus. After the abscess was opened, it sprang a tiny surprise on everyone—a minute sea snail. The checkered periwinkle was still alive despite being covered in human flesh and wound ooze for over a week.

Luckily, it never nibbled on the boy. Periwinkles are herbivores, and this one survived thanks to its usual habitat. They browse shoreline rocks, and since air is not always good for sea snails, the species can seal off its shell with thick mucus. This prevented the periwinkle from suffocating inside the wound.[3] 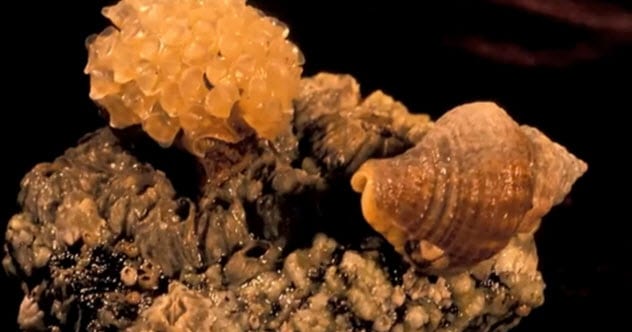 During a 2012 study, researchers found another great dad in the animal kingdom. The male marine whelk cares for his offspring, while the female leaves after mating and gluing egg sacks to his back. Each capsule contains about 250 eggs. The male must carry dozens of these bags for about a month, during which he loses a lot of weight.

However, the whelk is a dedicated dad. The species slithers about in California’s mudflats making sure that the eggs stay hydrated and cool. As if being a single dad is not hard enough, his kids are violent. Upon hatching, the baby snails massacre each other. The few siblings that survive are well-fed.

Worse, DNA analysis showed that, on average, a male cares for a mere 24 percent of his own progeny. The rest are fathered by up to 25 other males with which the mother was involved. Researchers believe that the dads accept the burden to show females that they are good parents and thus to earn more mating rights.[4] 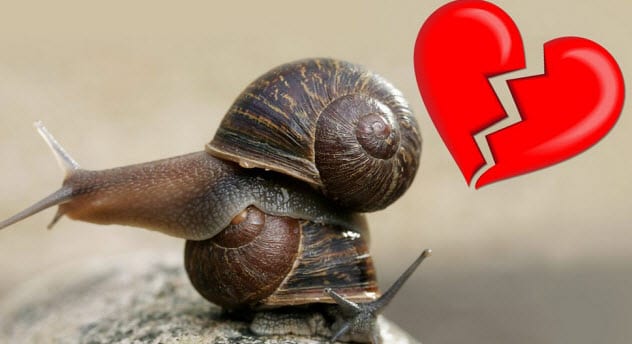 The common garden snail is a familiar sight. Normally, their shells swirl only to the right. A rare genetic mutation must occur for the sides to switch. In 2016, one was found in London and named Jeremy.

A year later, scientists wanted to learn more about “lefty” genetics and decided they wanted to have his babies. Since his condition prevented him from a successful mating with normal snails, they had to find another mutant.

In 2017, the call went out to find Jeremy a wife-husband. (They are hermaphrodites.) The world’s largest broadcasting organization decided to help. The BBC made the lonely snail’s plight public, and two mates were found. Enter Lefty, donated by a snail enthusiast from Ipswich, and Tomeu, who was spared after a BBC-watching restaurant owner from Catalan noticed one appetizer was a match.

With the whole world watching, Jeremy was rejected. The other two got together and made 170 baby snails. At least, shortly before Jeremy died that same year, he managed a fling with Tomeu that produced 56 babies.[5] 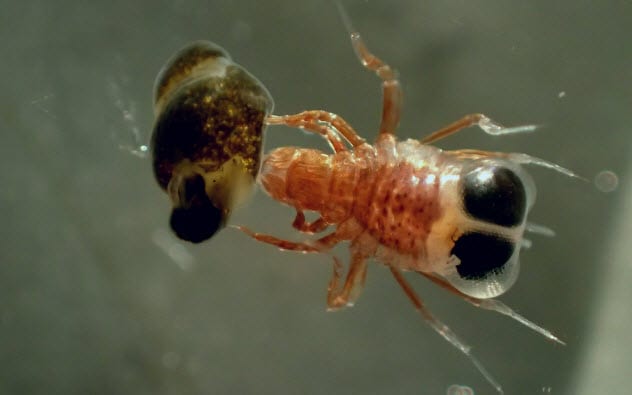 Antarctic pteropods are tiny, glass-like snails. As they are delicate and live in the vast, dangerous ocean, pteropods have evolved to be highly toxic. This survival strategy comes with an unusual risk of getting kidnapped.

At one point, crustaceans called amphipods realized that the snails are so poisonous that predators avoid them. Not only are the amphipods immune to the mollusks’ deadly zap but they also abduct the pteropods to use as shields.

The crustaceans use two pairs of legs to keep the snails hostage, wearing the unlucky victims like backpacks. It takes a few snails to build the living armor, but they can cover up to half of the host’s back. This criminal behavior suits the amphipods well because it convinces predators to go look for lunch elsewhere.[6]

The snails get a raw deal. Once kidnapped, they cannot feed and eventually starve to death. To add insult to injury, their corpses are often kept by the amphipods that abducted them. 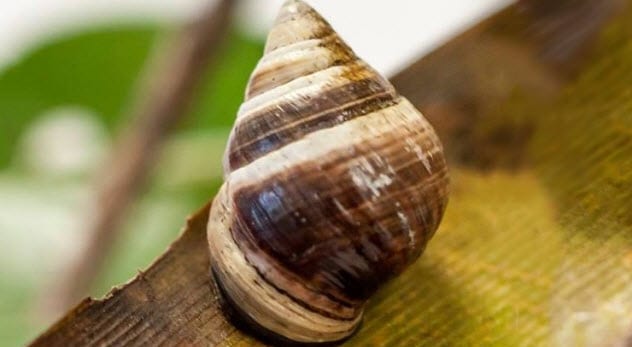 There was once a Hawaiian tree snail that lived an unusual life. Never did this slimy creature sail up a tree in the wilderness because Lonely George was born and raised in the laboratory.

His ancestors—the last 10 Achatinella apexfulva—were captured for a breeding program in 1997. The attempt at snail romance was a disaster. For unknown reasons, all the babies died except for one. George lived for 14 years at the University of Hawaii, becoming a local celebrity and doing tours to educate schoolchildren about the environment.

George was the last of his kind. The mysterious maladies that wiped out his peers also killed off the original 10 adult snails. Hawaiian tree snails were once so plentiful that 19th-century records describe how Europeans collected 10,000 a day.

This harvest was half of the problem that ended up killing the species. At one point, the rosy wolfsnail was brought to Hawaii. The idea was to use this foreign species to eat another invasive snail, the African land snail. Except the rosy wildly feasted on native species, too. George died in 2019.[7] 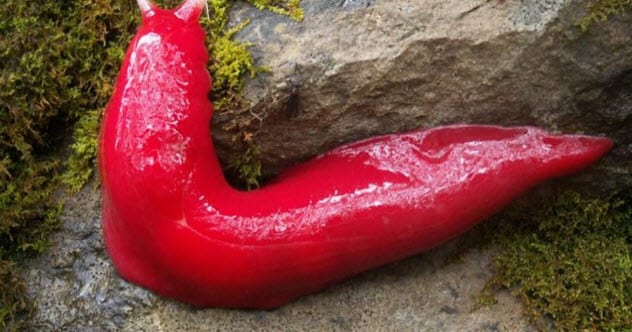 Australia is home to some of the strangest species on Earth. This fact echoed in the recent discovery of a new slug. The species (Triboniophorus aff. graeffei) is big and neon pink.

Measuring 20 centimeters (8 in) long, it crawls along a single mountaintop. For a long time, scientists knew the creatures were on Mount Kaputar but thought they belonged to the red triangle variety. The latter is a common sight along Australia’s east coast. A new study identified the separate species as one that evolved on Kaputar.

The slugs often live among red eucalyptus leaves, a clue as to why they turn hot pink. But camouflage does not explain why the slugs spend a lot of time out in the open. Their unusual shade might be an evolutionary quirk.

Mount Kaputar was an isolated oasis in a desert for millions of years, and such havens can produce odd creatures. Apart from giant pink slugs, the mountain also spawned unique species like the Kaputar cannibal snail and the Kaputar hairy snail.[8] 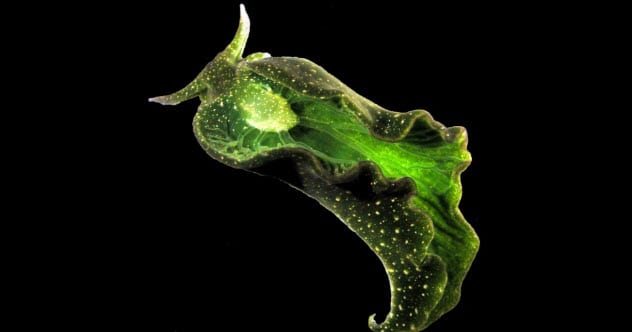 As the name suggests, Elysia chlorotica is stuffed with chloroplasts. This allows the sea slugs to do something amazing—they photosynthesize like plants. Similar to plants, the slugs are green and leaf-shaped.

Found off the United States’ East Coast, this ability does not come naturally. They poach the chloroplasts from algae. After absorbing enough, they do not eat for more than nine months. They merely bask in the sun and make their own sustenance.

It remains unclear how the chloroplasts live so long and remain unharmed by the slug’s gut or immune system. In turn, the slug mysteriously survives deadly amounts of free oxygen radicals produced by photosynthesis.[9]

How do the plant parts and the animal parts even interact?

Only a thorough analysis could clarify the symbiosis. Unfortunately, this unique animal-plant hybrid is almost impossible to find in the wild and does not live long in the laboratory. 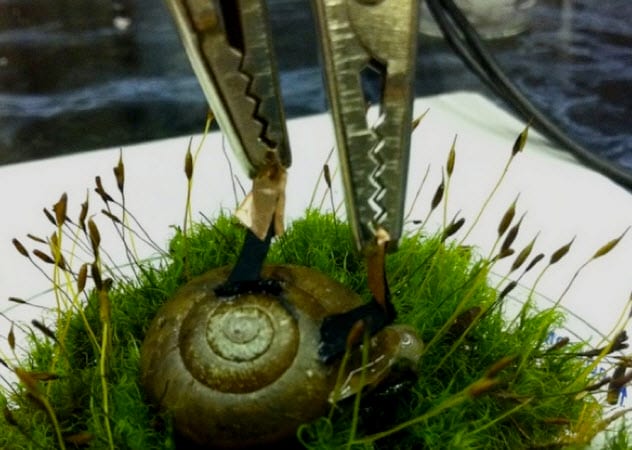 Snails do not care for human politics. But the intelligence community cares about snails. The research arm of the United States military (DARPA) wants mollusks as batteries and listening devices.

In 2012, a project successfully turned a snail into a living battery. The experiment used the animal’s blood sugar to recharge a battery-like implant, which generated a sustainable amount of energy for months.

Although the snail equals just below the charge of an AAA battery, researchers have big dreams. They plan on tweaking the technology-biology link until snails can generate enough power to run microelectronics. This would allow the creatures to slide up and down enemy walls as living sensors and detectors. They could even get saddled with miniature cameras.[10]

Although turning snails into cyborgs sounds weird and hurtful, the mollusks live close to normal lives. The success of their energy capacity depends on resting and eating during which glucose levels recharge the battery.

For more strange stories about snails, check out 10 Creepy Snails That Will Ruin Your Day and 10 Most Talented Snails In The World.