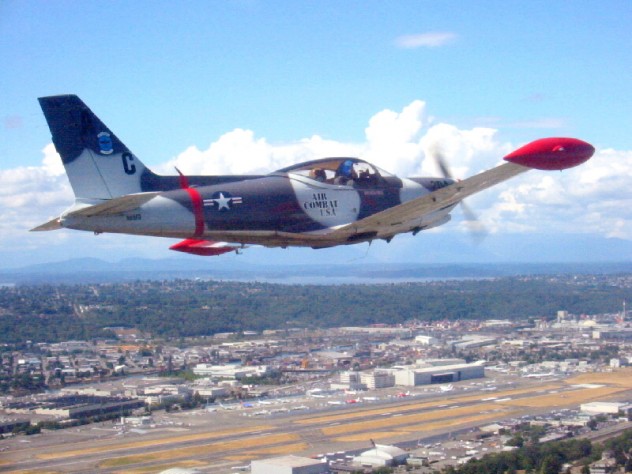 At the top of every kid’s wish list, at some time or another, are the words “fighter pilot.” Air Combat USA is an opportunity for adults to actually be one, with a full day’s experience in aerobatics and dogfighting. You spend some time in a preflight briefing learning about the aircraft, an S1A1 Marchetti SF260, and your tactical maneuvers. The Marchetti is an Italian plane that can perform unlimited aerobatics. It also allows your instructor to sit right next to you while you fly, instead of behind you. Thanks to this setup, you will have the controls 90 percent of the time.  You even get your own flight suit, helmet, and parachute! You’ll take your aircraft up with the help of your instructor and practice some of the maneuvers you learned in preflight.

When you feel like you know what you’re doing, the dogfight begins. There’s an electronic tracking system on the planes that will give you sound effects, and will cause smoke to trail from the tail of the enemy plane when you’ve hit your target. They also include cameras from different angles of the flight (including one from the gun sight). When you land, you get to see your flight from the other plane’s perspective and go over it all with your instructor. To keep reliving your day (and to show off to your friends), you can keep the video footage. They also offer the opportunity to let you bring a friend, so that you two can fly against each other. 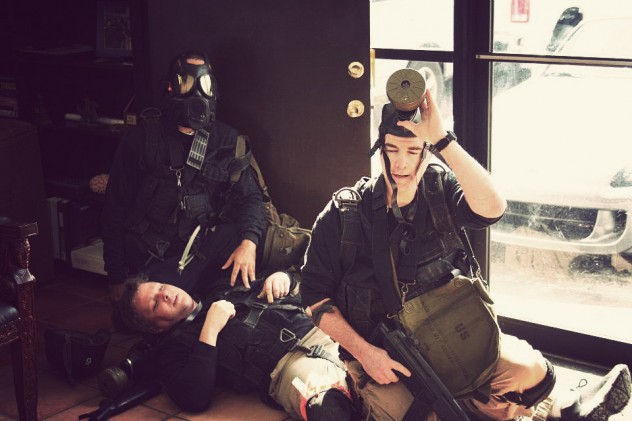 You know what’s also on wish lists everywhere? Being the ultimate soldier. And this adventure doesn’t mess around. Held near Miami, Florida, Covert Ops is your chance to learn all of the counter-terrorism skills your brain can hold. There’s a scaled-down two-day adventure, or a four-day one if you’re feeling hardcore. In both you’ll have weapons training (pistols) followed by the use of Krav Maga (a form of martial arts developed in Israel and designed to seriously mess somebody up) to disarm your enemy in close combat. You’ll also learn how to shoot from moving vehicles and identify an ambush attack. If you think you can handle the four-day adventure, you’ll learn all of these skills more in-depth, as well as learning additional skills like military gas training, combat first aid, close-quartered battle techniques, vehicle take-downs, and assault rifle handling and use. Basically, you learn to be a badass. Both adventures have missions for you to carry out on the final day. 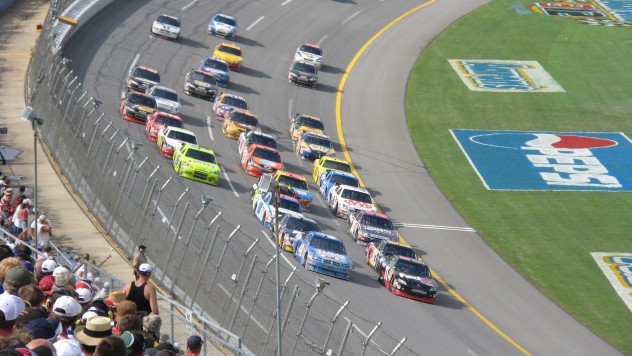 It’s time to put up or shut up in your own stock car race at Talladega Superspeedway in Alabama (or one of eight other tracks across the country). All cars are Sprint Cup Series racers. You’ll go through a ground school, learning about the racetrack, the cars, and track safety. After you get suited up in your jumpsuit, helmet, and HANS device and are given your raceway orientation, you’ll head out onto the track with about eight other cars. The cars can top out around 275 kph (170 mph), and both drafting and passing are absolutely allowed. You will not be required to follow a pace car. You can bring friends down to try and fill the grandstand, but in the long run, you’ll only be reliving your race in your mind on Monday morning as you sit in traffic on the way to work. (Although it’s probably cooler than what the guy next to you is thinking about.) 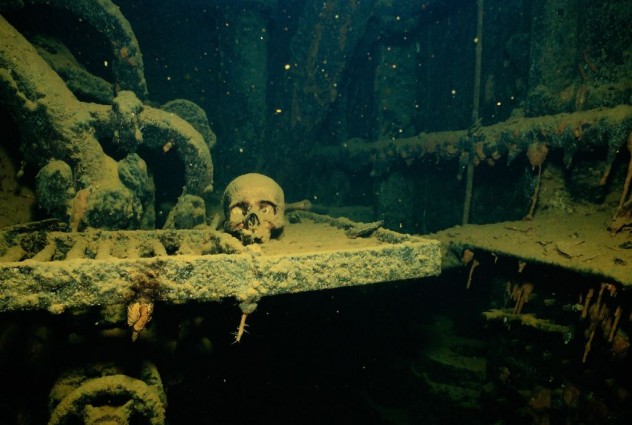 In the middle of the Pacific, a part of the Caroline Islands in Micronesia, lies the protected body of water of Truk Lagoon (also known as “Chuuk Lagoon”).  Once considered “Japan’s Pearl Harbor,” the location was a main base for the Empire of Japan during World War II. Everything from aircraft carriers to destroyers to submarines was anchored at this site. American forces attacked the location on February 17, 1944 during Operation Hailstone, lasting two days and taking the Japanese completely by surprise. They had moved some larger ships out to sea, but many were still anchored in Truk. After an attack involving subs, ships, and aircraft, the battle ended in the defeat of Japan. The Americans sunk 12 warships and 32 merchant ships, and destroyed 249 aircraft. The number of wrecks and the clear, warm waters make Truk Lagoon a scuba diver’s paradise.

One of the greatest ways to experience as much as possible is aboard the dive ship the SS Thorfinn, which covers more than 70 dive sites in the area—mostly ships, but also airplanes and even a sub. Wreck depths vary from the surface all the way down to below 60 meters (200 ft). Several of the larger ships carry some cool cargo, too: Things like tanks and Jeeps still sit in the cargo holds. You can swim right through the ship and see many of the rooms and artifacts that were left when they sank. Many of the shells and munitions are still considered “live,” so be prepared. If you’re a diver and a history nerd, this could be an awesome opportunity. 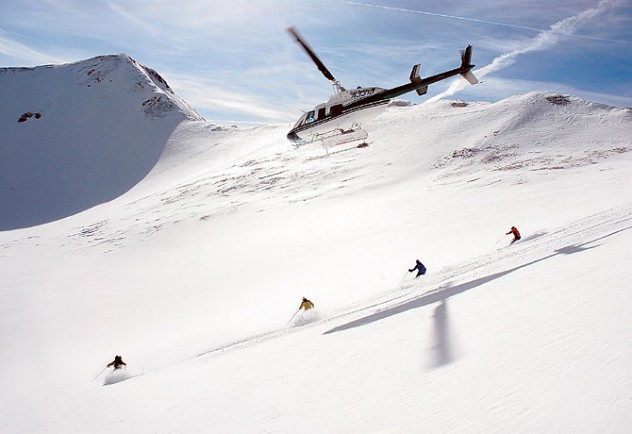 Crave speed and deep powder runs? Ever wanted to ski or board down the open face of a mountain? Telluride Helitrax can hook you up. Located in the San Juan Mountains, they have 200 square acres of varied terrain accessed by a Bell 407 helicopter. You can ski from 3,050–4,115 meters (10,000–13,500 ft) of elevation, each run dropping 305–915 meters (1,000—3,000 ft). Each day of heli-skiing allows at least six runs, giving you a massive amount of vertical skiing, with most runs ranging from around double-blue to double-black grade. Telluride hooks you up with all the stuff you’ll need: food, water, avalanche beacons, safety equipment, and powder skis and poles. If you’re a boarder, you have to bring your own board, preferably the biggest one you’ve got. This is not for the faint of heart; you should be an “advanced-intermediate or above” skier (“advanced,” for snowboarders), in pretty good shape, and already be pretty confident with black diamond runs. You’ll ski in a group of four to five, with one guide. If you’re feeling crazy, they offer two- or five-day heli-skiing trips to run you into the ground. 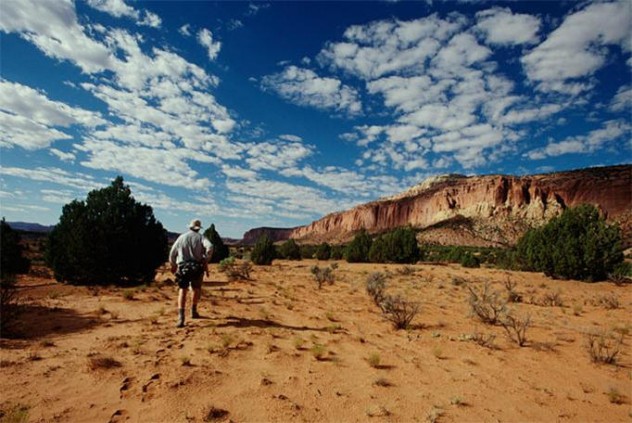 Always watch Doomsday Preppers but don’t know if you would actually survive? Or wonder why Bear Grylls drinks his own pee? The BOSS course just might be for you. BOSS is the Boulder Outdoor Survival School in Boulder, Utah. It offers a bunch of different options for courses you can take to learn and use primitive and traditional survival skills. This school doesn’t just teach it, they make you live it.

Take, for example, the most intensive and challenging course they offer: the 28-Day (“Standard”) Field Course. You’ll work with up to 11 other students using nothing but a knife, water bottle, blanket, and poncho. You can hike about 25–50 kilometers (15–30 mi) each day. You’ll learn skills while on the move, including primitive skills like how to build fires and shelter, purify water, and even how to select edible and medicinal plants. You’ll go through a course about “large-game processing” using, generally, a sheep (you don’t have to watch if you don’t want to) but you do need to learn how to prepare and store the meat. You’ll also have what they call a “solo,” when you’re put into a site to create and use your new skills to live on your own. You get to have an expedition that lets you (and your class) travel without an instructor. There’s a very mysterious “Final Challenge” on the curriculum, but your guess is as good as mine. The best news of all? Going through the course usually has you losing 10–30 pounds by the time you’re done. 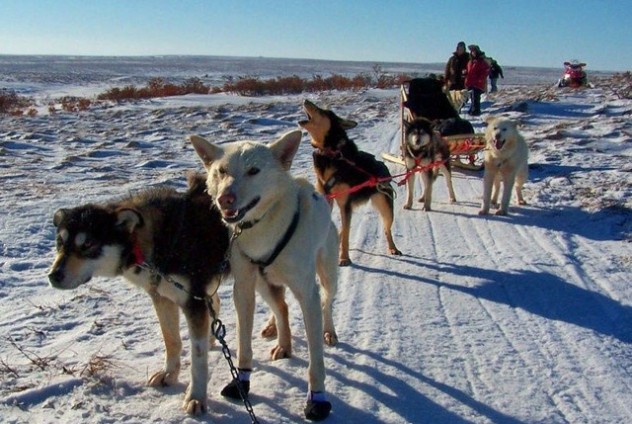 Seriously, you’ve never driven your own Alaskan dog sled team? Get with the program. The Golsovia Lodge Mushing Trip out of St. Michael, Alaska, may be just what you need to open your eyes. The company was founded by Jerry Austin, who made it to the Iditarod Hall of Fame. For the Golsovia trip, you’ll mush for up to 40 kilometers (25 mi) each day, including one leg that goes over 6.5 kilometers (four miles) of ocean ice to an abandoned Eskimo village, and another leg that covers 11 kilometers (seven miles) uphill. You’ll get to stay at lodges or heated tent camps with your dogs each night. And if you’re going to have a sled dog team, you might as well really bond with the group. 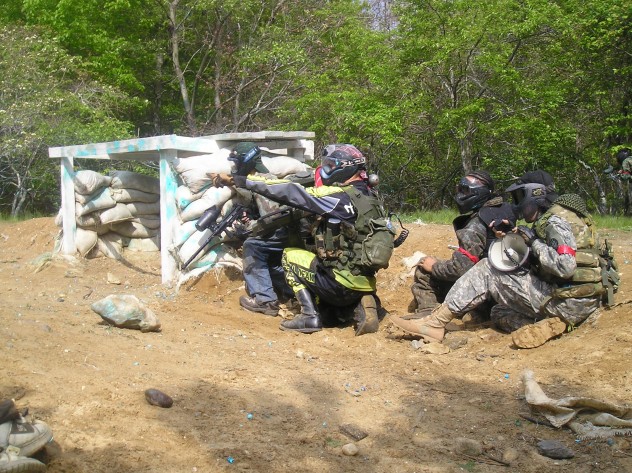 If you want to practice saving the world, it’s time to check out some scenario paintball events in Indiana. Scenario paintball is a theme-based game with missions to complete, usually relating to the military or law enforcement. Hundreds of people show up to play. This place has 11 fields with cool names like “Cambodia,” “Omaha Beach,” and “Jungle,” plus an indoor arena. Their grounds include towns, woods, towers, forts, and different vehicles as part of their games. They also have special missions covering things like “search and rescue” and “demolitions.” Paintball extras like grenades, rocket launchers, and tanks could make appearances. And no, “tanks” is not a typo. 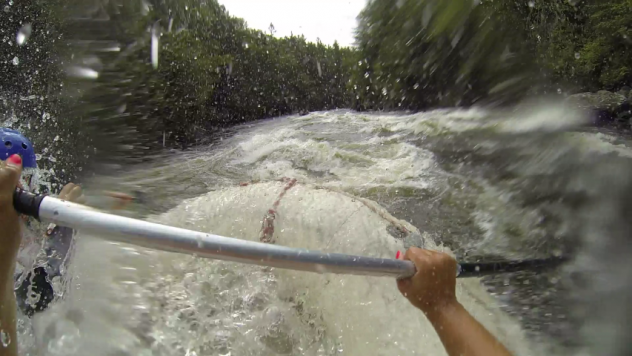 Coming out of Millinocket, Maine, you’ll find the Jump and Raft, a combination of two fantastic adventures: skydiving and white water rafting. You can opt for the two-day adventure package (one on each day) or take each individually. The tandem skydiving starts with a 30-minute ground school where you learn the basics. The jump takes place right near Mount Katahdin, giving you some fantastic scenery to take in on the way down. You jump from 3,350 meters (11,000 ft) with your instructor safely strapped to your back, giving you a freefall of almost a full minute, flying towards Earth at 195 kph (120 mph), then a nice five- to nine-minute glide once you pop your chute. Rafting takes place on the Penobscot River and is rated as Class V rapids (the most dangerous is Class VI). You’ll hurtle through 21 kilometers (13 mi) of chutes and holes, and tackle rapids with extreme names like “Exterminator.” Gear up. 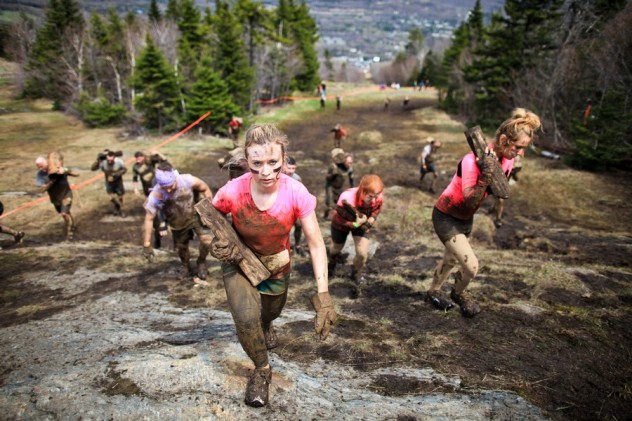 Number one on this list is not just an ultimate adventure, it’s an ultimate challenge. It requires mental, physical, and emotional strength you probably never even knew you had. Are you up for it? Created by a member of the British Special Forces, the Tough Mudder challenge event is a 16–19 kilometer (10–12 mi) obstacle course created to test endurance, stamina, strength, and teamwork. It is not a race, although you can time yourself for bragging rights. (The average Mudder gets through in about 3.5 hours.)

The true accomplishment comes from just completing and overcoming the course itself. There’s an entire training “boot camp” designed to prepare you for what you’ll face. Mud comes stock with everything, and obstacles include things like low-crawling through long pipes and under barbed wire, swimming through icy water (called the “Arctic Enema”), and running through strands of wire charged with 10,000 volts of electricity. You’ll also climb insanely high walls, crawl under nets, drag tires, and jog through flames to cross the finish line. Everyone who makes it to the end gets a free beer. Tough Mudder raises money for the Wounded Warrior Project, a charity offering help and recovery services to injured military vets. Events take place across the US, the UK, Australia, and Germany. If you feel like you’re a tougher Mudder than the others, you can go on to enter the World’s Toughest Mudder competition and spend 24 straight hours running obstacles, if you somehow didn’t already punish your body enough.