Having spent an eternity in management, God knows that being a good delegator is the cornerstone of success. Anyone who’s read the Bible knows that some of his requests are bizarre (like the time he told Hosea to marry a prostitute and name his kid “Not My People”), but who really wants to question God when he tells you to do something? Some people took their “divine assignments” so seriously and with such devotion that we can’t help but marvel at their resulting splendor as we discover them while along America’s roads. 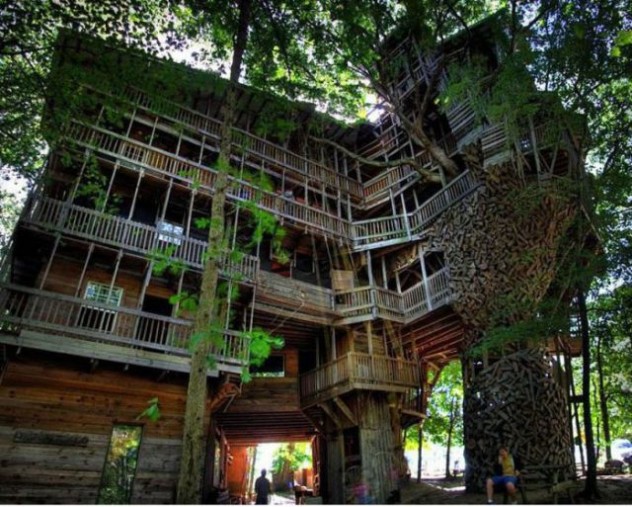 Maybe because the ark was so 2500 B.C., or maybe because the minister was already living atop fairly high ground, God instructed Horace Burgess to build him a tree house. Begun in 1993, Burgess’s structure is now 30 meters (90 ft) tall and contains 80 rooms, including a bell tower and a basketball court. Burgess claims to have spent only $12,000 on its construction, and God has promised he will never run out of wood.

The Minister’s Treehouse was once open to the public but has been closed by order of the local fire marshal. Apparently, the marshal is unaware that the house’s original certificate of occupancy was issued by a much higher authority.

9 Jesus Is Coming To An Alien Planet Near You 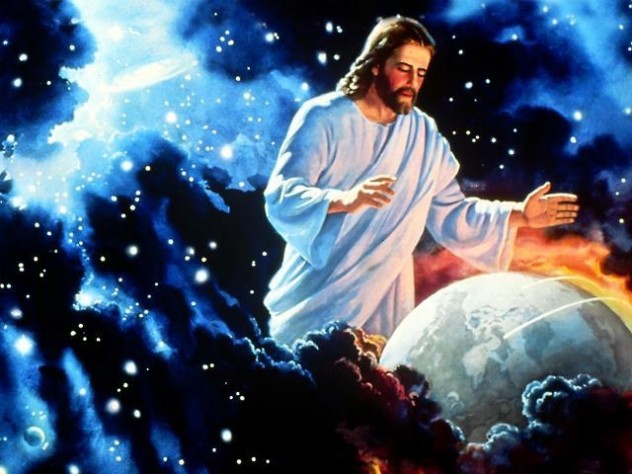 Following a miraculous recovery in 1917 from what should have been a life-ending accident in the Kentucky coal mines, Harrison Mayes could only think of one way to repay God: He would plant homemade concrete signs and crosses along the roadside in 44 states. Some merely encouraged the passersby to “Get Right With God,” while others offered the disclaimer, “If You Go To Hell, It’s Your Fault.”

Later in life, Mayes must have decided that his message needed a larger audience and began labeling his signs with directions like, “To Be Erected on Planet Jupiter.” He signed them P.A.E., which stood for “Planetary Aviation Evangelist.” If interplanetary concrete missions work doesn’t pull down some serious rewards in heaven, then God only knows what does.

8 Grotto Of The Redemption 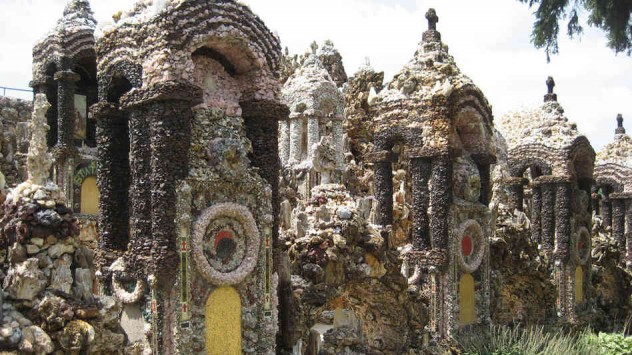 The Virgin Mary is also a fan of large and interesting building projects—or maybe she just steps in when God is busy with his multitude of other bizarre projects. Whatever the case, when Mary was kind enough to spare Father Paul Dobberstein from pneumonia in 1912, he promised to build her the largest grotto in the world. In Iowa. Because as long as you’re going to spend 42 years sculpting an enormous pile of rocks to depict nine scenes in the life of Jesus, why not do it in Iowa?

Father Dobberstein traveled far and wide in search of jewels for his monument, which included a chunk of the North Pole and a few cave formations that he “borrowed” from Carlsbad Caverns when no one was looking. He hired men from the local pool hall to help, paying them in both beer and cash. In 1954, Dobberstein went on to build grottoes in heaven, but work continues on the Grotto of the Redemption to this day. For employment inquiries, please report to the local pool hall and be willing to accept liquid currency and a virgin’s blessing. 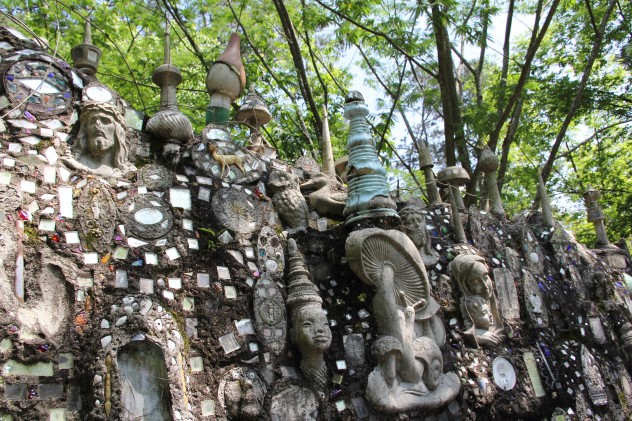 Created in the ’60s by preacher and bicycle repairman Howard Finster, Paradise Garden once served as a fantastical showroom for the 5,000 paintings Finster had promised God he would create. A true overachiever, not only did Finster paint over 46,000 religious pieces in his lifetime, he turned acres of Georgia swampland into a small village made entirely of recycled objects. His subjects included Christianity, creation, and of course, mechanical objects—because robots were the only thing the Bible was missing.

Finster’s faith was tested when his work became famous through R.E.M. album covers and Johnny Carson appearances. His sudden discovery showed him that his sacredly sanctioned art was folk art and that he could sell it for lots of money. 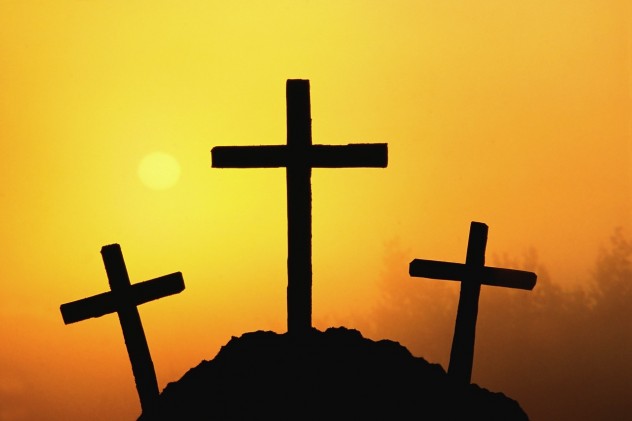 Ever wondered why roadside crosses often come in threes? The majority of these cross clusters are the work of Reverend Bernard Coffindaffer, a Methodist minister who claimed that the Holy Spirit appeared to him following open-heart surgery in the early ’80s and told him to get to work erecting crosses along our nation’s highways. Coffindaffer convinced landowners to donate over 2,000 sites in the US and abroad to the building of these monuments and spent over $3 million of his own money on materials. He did all of this in just nine years before his death in 1992. 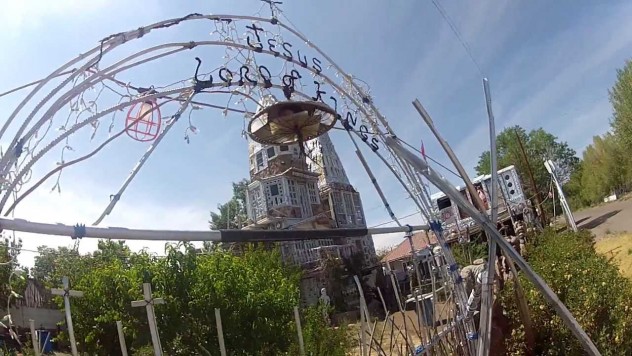 Jesus did come back, and he’s living in Colorado, according to a Native American, Vietnam War veteran who goes by the name of Cano. Having spent 30 years creating a gleaming masterpiece made up of over 100,000 beer and soda cans, along with other pieces of scrap metal, Cano credits Jesus himself for the work as well as “Vitamin Mary Jane.”

Jesus has been living here since 1987, when Cano, who lives across the street in a trailer, says they became neighbors. Cano’s plan is to eventually talk Jesus into going to Washington with him so that he can back Cano up while Cano lists his grievances to the president. 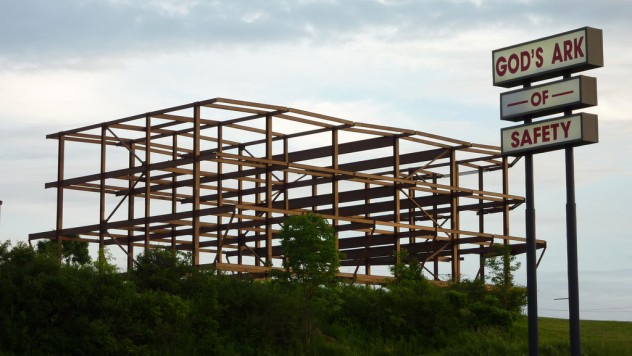 According to Pastor Richard Greene of Frostburg, Maryland, Jesus instructed him to build a new ark. He also told the pastor to build this ark next to the interstate to warn people that he was coming back.
Either way, people will definitely take note when this hulking, biblical-scale behemoth casts its shadow across their morning commute.

Although Greene’s vision occurred in 1976, God’s newest ark is currently just a huge steel frame. The pastor claims that it will cost another $20–30 million to complete, but he assures everyone that those steel beams already have healing properties and will eventually contain a gymnasium, theater, and a conference center. 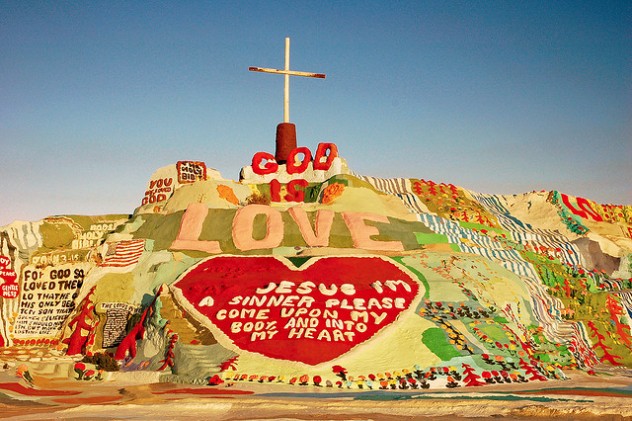 For those of us who aren’t lucky enough to have Jesus as a neighbor or to live near steel beams with magical powers, a trip to the middle of the California desert might still save our souls. Just up the road from the abandoned Salton Sea, a three-story bluff covers the expanse of a football field and proclaims God’s love in Technicolor splendor.

This sinner’s beacon, adorned with colorful Bible verses and psalms, was created by Leonard Knight, who began the project in 1967 after seeing “the light.” At first, he thought God wanted him to stitch a hot air balloon together from scraps of fabric, but after years of failed attempts to inflate it, Leonard decided to make God a little monument instead. Thirty years later, he was still adding to it (using adobe, tires, and more painted scriptures) with a devotion that even an atheist might credit to divine inspiration. 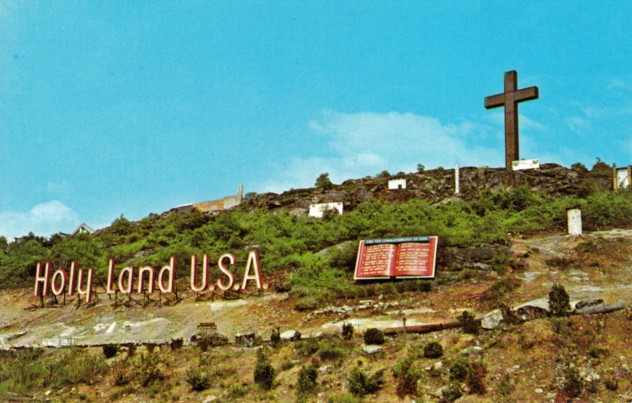 Perhaps you’d like your own mission from God, but you’re afraid to start with a mere dirt mound in the desert. If so, this abandoned biblical amusement park may be the calling you’ve been waiting for. Located in Waterbury, Connecticut, Holy Land USA was the brainchild of evangelist John Greco, who built the park in the ’50s after he received a message from God. Much like the other artistic visionaries on this list, Greco fashioned his park out of recycled materials like old plywood, chicken wire, bathtubs, tin siding, and fragments of religious statues.

Leading guests through replicas of a biblical-era Holy Land, which began with the Garden of Eden and included fun places to hang out like “The Catacombs,” the theme park experienced a surge of popularity in the ’60s and ’70s. Following Greco’s death in 1986, Holy Land fell into disrepair, and God was left to take his message elsewhere, abandoning the project altogether when The Flaming Lips filmed a video from their album, “A Priest Driven Ambulance” amid the park’s crumbling ruins in 1991. 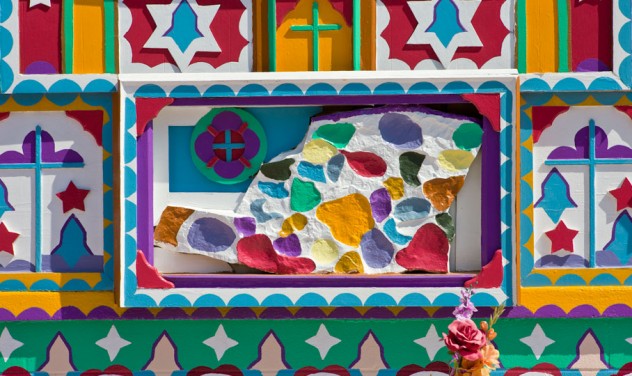 If all else fails, prophet Isaiah Robertson is dutifully preparing us for the coming Rapture in 2014. Using his house and property as a canvas, he channels God’s message using bright colors and cutout wooden symbols. A 7.6-meter (25 ft) cross stands next to the house, also a kaleidoscope of layers and shapes, which is the exact height Jesus will be when he returns, says Isaiah.

Prophet Isaiah is quite chipper when he warns visitors that they might burn in hell for all of eternity, and everyone who drops by gets the same warm-hearted tour. According to Isaiah, his colorful home is one of the last things we’ll see on the way to becoming either a sheep or a goat during the Rapture. At least if we never make it to any of the other sights mentioned on this list, the good news is that we’ll still catch a glimpse of this one, if only in passing—on our way to becoming flaming goats swimming in lava below Jesus’s prodigious feet.

I currently reside in Charlottesville, VA, and am forever exploring the strange things that make life special. I share life’s specialness with a boyfriend and two cats. I recently started a blog to share it with everyone.