From King Arthur to the Crusaders to the Nazis, everybody has been trying to find the Holy Grail for the past 2,000 years without success—or at least that’s what we think. After all, who decides whether something is actually the Holy Grail?

Furthermore, if we describe the Holy Grail simply as an ancient artifact associated closely with Jesus, then it doesn’t necessarily have to be a cup. Based on that logic, here is a list of 10 artifacts that could be regarded in some way as the Holy Grail. 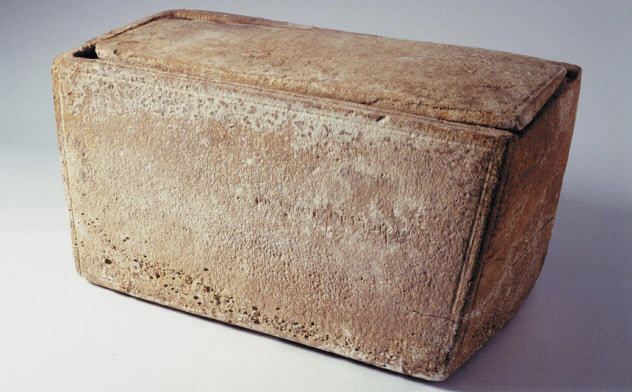 Discovered in Israel, the controversial James Ossuary is an ancient limestone box for storing bones which is inscribed with the words, “James, son of Joseph, brother of Jesus” in Aramaic. Immediately, this seemed improbable, especially when it turned up in the hands of an antiques dealer rather than from an excavation site. The dealer was taken to court by the Israel Antiquities Authority but was found not guilty of forgery.

The James Ossuary is believed to have come from a further collection of ossuaries unearthed in Jerusalem, some of which contain inscriptions interpreted as the names of Jesus, Mary, and even Judah, the alleged son of Jesus. Clearly, the discovery of the bones of Jesus Christ and his family could easily be considered the Holy Grail, albeit not in chalice form. 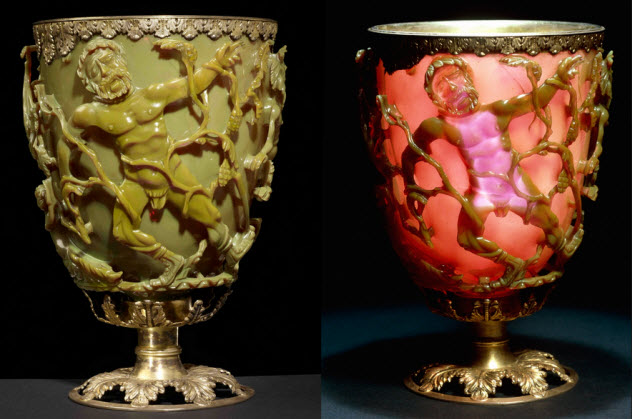 The Lycurgus Cup is not associated with Jesus in any obvious way. However, it does something quite amazing. This Roman glass chalice, which depicts a scene involving King Lycurgus of Thrace, appears to be green when lit from the front and red when lit from behind. Even more incredible, those who made it seem to have, either accidentally or intentionally, used nanotechnology to achieve this effect.

The problem with calling this cup the Holy Grail is that it is only 1,600 years old. However, archaeologists have been known to get things wrong. Therefore, this cup with magical properties years ahead of its time could in fact be the Holy Grail—or at least the source of its legend. 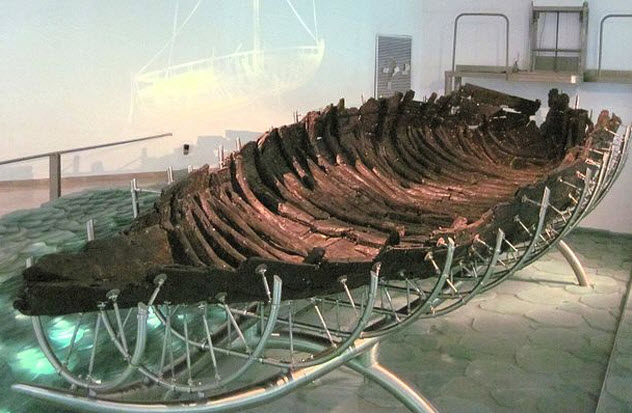 Given the many allusions in the Bible to fishing, the Holy Grail could be a fishing boat—something that was apparently very important to Jesus and his followers. This particular boat, found in the mud of the Sea of Galilee during a drought, has been dated to almost exactly 2,000 years old.

A full 2.5 x 8 meters (8 x 26 ft) and repaired numerous times by its owner, the boat’s specific location is reportedly the town of Dalmanutha where Jesus sailed after feeding the 4,000. With such a clear connection to a place where Jesus is supposed to have gone, this preserved fishing vessel easily fits within the realm of things that could be described as the Holy Grail. 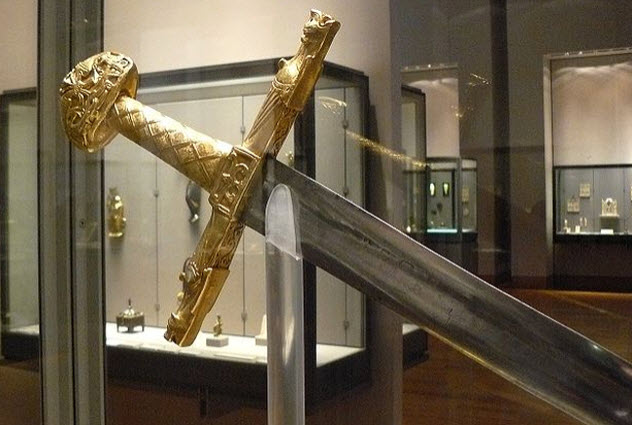 Joyeuse is the name of a sword that belonged to Charlemagne in the Dark Ages. A hugely important figure in European history, he united much of Western Europe into a Christian kingdom and was crowned Holy Roman Emperor by the Pope. The age of the weapon is disputed, with different historians claiming that it was made anywhere from the 8th to the 13th century.

However, a legend elevates this sword to an item of Biblical interest. Allegedly, a part of the Lance of Longinus—the spear that was used to pierce Jesus’s side—is forged into the hilt of Joyeuse.

This is an unsubstantiated claim. Yet the uncertainty about the age of Joyeuse and the materials used to make it, as well as the fact that Charlemagne was the first Christian king of Europe since the fall of the Roman Empire, does suggest a possible link. Admittedly, Joyeuse might not be the Holy Grail, but it could be as close as we can get. 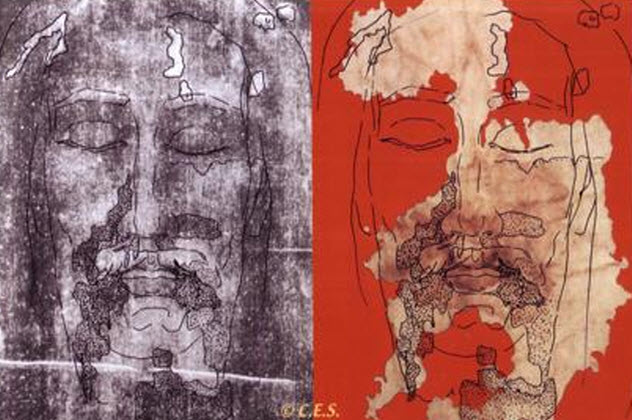 The Sudarium of Oviedo, the Shroud of Turin’s lesser-known little brother, is a small piece of cloth less than 1 meter (3 ft) long which is stained with blood alleged to be that of Jesus. Whereas the Shroud of Turin is argued to be a medieval forgery, the Sudarium has a clearly recorded history that dates back to the right era.

Interestingly, new studies claim that the bloodstains on the Sudarium match almost perfectly the markings on the Shroud. Apparently, both pieces of fabric bear the same rare blood type, and this match is closer than those required in most judicial systems around the world.

If the Sudarium of Oviedo really is stained by the blood of Jesus, then it could certainly be regarded as the Holy Grail. 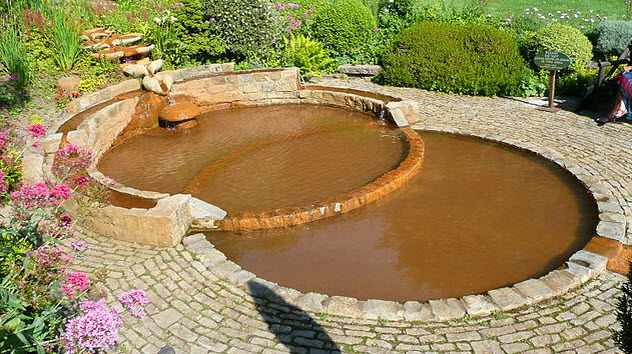 A place better known for its world-famous music festival, Glastonbury in the UK is the site of several locations with close mythological ties to the Bible and the Holy Grail.

One legend says that Joseph of Arimathea—who collected Jesus’s blood in what was to become the Holy Grail—traveled to Britain after the Crucifixion and buried the Grail there. The legend also suggests that Joseph’s staff, which he placed in the ground on a nearby hill, grew into a holy thorn bush. Today, there still exists such a plant, known to originate from Palestine.

At Glastonbury, you can also find the Chalice Well, a spring said to originate where Joseph of Arimathea buried the Grail. Supposedly, the well’s water runs red because of the blood of Jesus and tastes of iron because of the nails used to crucify Him.

Though this phenomenon is attributed to iron oxide in the soil, the Chalice Well could actually be the Holy Grail, given its astonishing properties and links to the Bible. 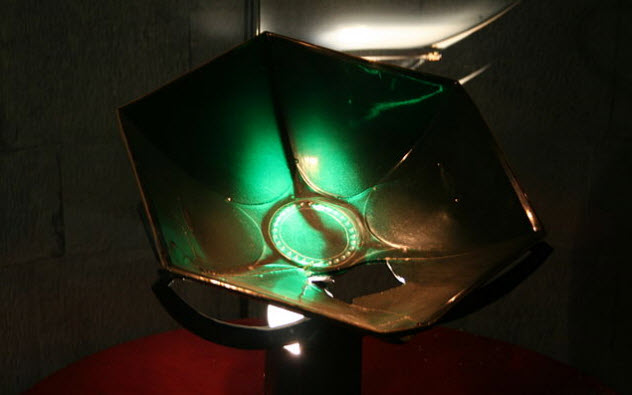 Sometimes called the Genoa Chalice, this ancient artifact is not quite a cup and is instead referred to as the Holy Dish. Held in Genoa and over 35 centimeters (14 in) in diameter, this hexagonal relic is traditionally said to have been carved from a gigantic emerald, although more modern sources claim it is just green Egyptian glass. This was confirmed when the dish was dropped and partially broken by Napoleonic troops.

The origins of the Sacro Catino are not clear. All we know is that it is incredibly old and that it was captured in Caesarea during the First Crusade, as recorded by William of Tyre. Having become a popular contender for the Holy Grail in the 13th century, the Sacro Catino could be just that. 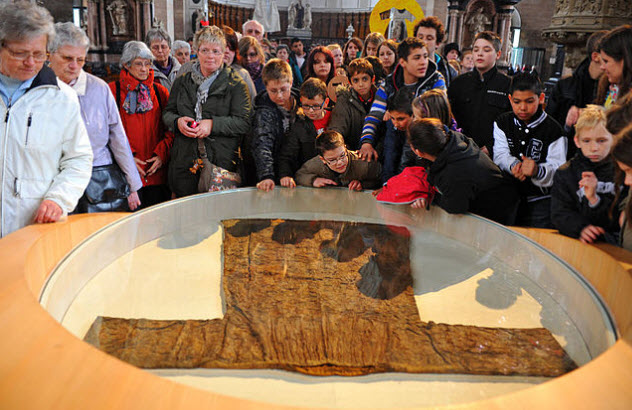 Although many institutions have claimed to possess the “seamless robe” worn by Jesus during his Crucifixion, Trier Cathedral appears to have the best case. Supposedly brought to Trier by St. Helena, mother of Constantine the Great, after returning from Jerusalem, the seamless robe has attracted millions of pilgrims over the years.

Yet nobody actually knows the age of the robe because it was dipped in a rubber preservative at some point, making carbon dating impossible. If this is indeed the true seamless robe worn by Jesus during the Crucifixion that bears his blood, it could surely be considered the Holy Grail. 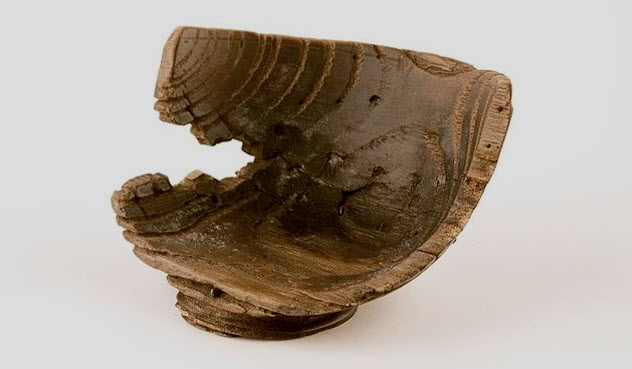 The Nanteos Cup resides in Wales and is nothing more now than a fragment of wood. This former bowl is reported to have mystical powers of healing, with people drinking from it and even trying to eat the relic itself to absorb its magic.

Supposedly similar to drinking vessels used in Palestine at the time of Jesus, the Nanteos Cup has been stolen many times and had been missing for a whole year until mid-2015. While believed to originate from the 14th century, this tiny fragment of history, at only 10 centimeters (4 in) tall, seems like the sort of object which could have survived the past 2,000 years, remaining only as a battered piece of wood.

Given its highly regarded powers (so highly regarded that it was actually on loan to a sick lady in a hospital when it was stolen), the Nanteos Cup could quite possibly be the Holy Grail. 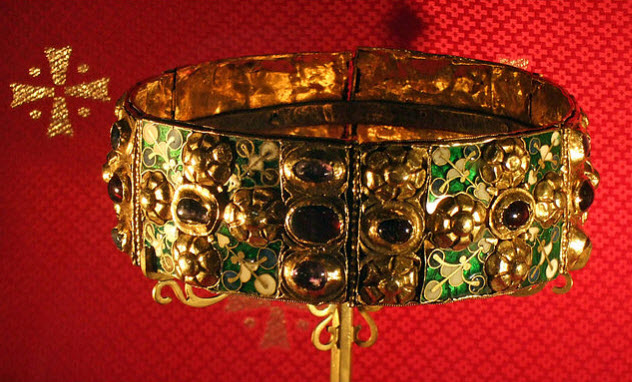 Though rather small compared to some other headpieces around the world, the Iron Crown of Lombardy remained a hugely important symbol of Christianity throughout the Dark and Middle Ages. The iron in its name comes from a strip of iron which runs around the inside of the crown, supposedly forged from one of the nails used to crucify Jesus.

Like the seamless robe, the nail is alleged to have been retrieved by St. Helena, who then passed it on to Constantine, the first Christian Roman emperor. An impressive number of names are said to have been coronated with this crown, including Charlemagne, Frederick Barbarossa, and Napoleon Bonaparte.

There are references to the crown as early as AD 781, although it is unclear when the iron strip was added to the gold. With such a central role in the history of European Christianity and a nail claimed to have been used on Jesus Himself, the Iron Crown of Lombardy could certainly be the Holy Grail. 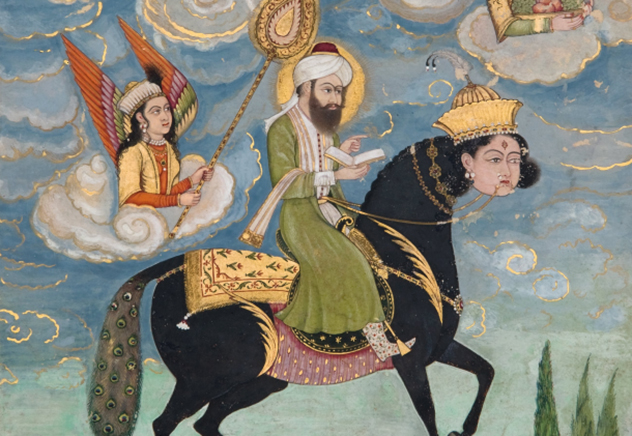 The Holy Grail is a fascinating topic that we have covered before. If you are interested in reading more, we recommend these lists from the archives:

Thiago is from a flat place with a big sky. Gotta fill all that space with something, so he filled it with his dreams.