Churches are synonymous with Christianity. We often think of churches as places of worship for Christians even though there are churches that are not targeted at that group.

These non-Christian churches are dedicated to the worship of other gods or humans or might not even be involved in the worship of any god at all. Some even come with their own religious books, prophets, and commandments. 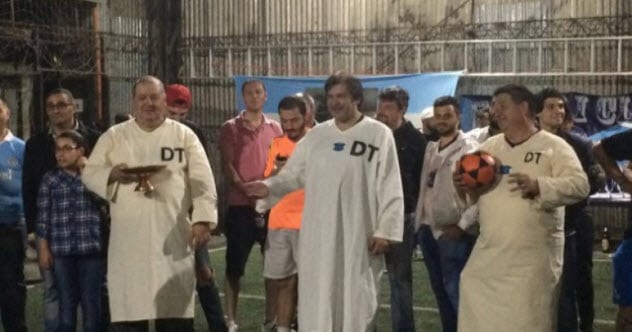 For their “calendar,” years are counted from the day of Maradona’s birth in 1960. So the date is always Maradona’s age with dD (despues de Diego) rather than anno Domini (AD). As of this writing, the current year for the Church Of Maradona is 57 dD.

New members are expected to score a goal with their left fist, as Maradona did during the 1986 World Cup, before they can be baptized in the church.[1]

Followers of the church draw parallels between Maradona and Jesus. Maradona was crucified, sent away from the pitch, and had his leg broken. But like Jesus, he came back. Followers also have their version of the Lord’s Prayer, written in reverence for Maradona. It starts with the lines:

Our Diego
Who art on Earth
Hallowed be thy left foot
Thy magic come
Thy goals be remembered.

Similarly, the church has its own version of the 10 commandments. Among others, they include undying love for Maradona and football, spreading the news of Maradona’s exploits, and honoring his shirt. The commandments also require that members name their first son Diego and change their own middle names to Diego. One member took this further when he named his twin girls Mara and Dona.

9 Church Of The Latter-Day Dude 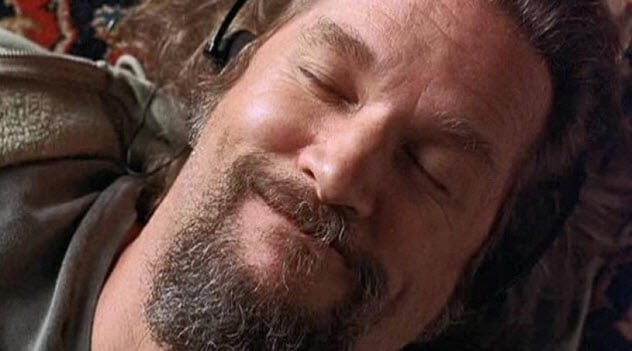 The Church of the Latter-Day Dude claims that it is an original religion modeled after the Chinese philosophy of Taoism. Its dogma is straightforward: Life is short, so take it easy. Followers are encouraged to live life one step at a time without bothers or unnecessary problems. Followers of the religion are called “dudes” regardless of gender. The religion itself is called “Dudeism.”[2]

Dudes do not necessarily believe in the existence of a god, although they do not focus on the nonexistence, either. Their church was created for people who fancied religion but are not satisfied with any of the available options. Dudeism prides itself on being an “open source religion” that allows worshipers to add or remove whatever they feel like from the religion.

The Church of the Latter-Day Dude also maintains a list of the “Greatest Dudes in History,” which it claims are its prophets.

The list includes Lao Tzu (the founder of Taoism), Heraclitus (the Greek philosopher who wrote that it was impossible to step in the same river twice), Mahatma Gandhi, The Buddha, and Jesus Christ (who is said to have converted to Dudeism after realizing that the Romans and Pharisees were fascists). On the fictional side, it has Snoopy, Charlie Brown’s pet dog from the Peanuts comic strip. Yes, Snoopy is a prophet.

8 The Church Of Wicca 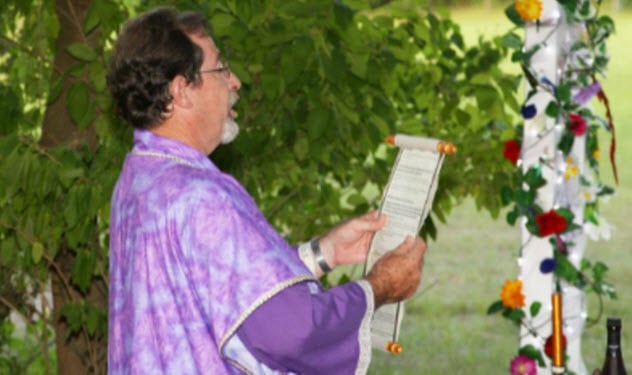 Wicca is a controversial religion. This is no surprise because it is a mixture of witchcraft and magic. It is also a decentralized religion with members worshiping independently, although they can form a coven to worship together.

These covens can commission a permanent place of worship that they call a church. Two examples are the Coven of the Gryphon Wiccan Church in Los Angeles and the Church and School of Wicca.

The Church and School of Wicca was founded in 1968 even though Wicca officially became a religion in 1972. The church says that it sympathizes with those brutally killed in the medieval ages over their religious beliefs. Its mode of worship is based on the phases of the Moon. There are no commandments. Members are allowed to do anything they want on the condition that it harms no one.[3] 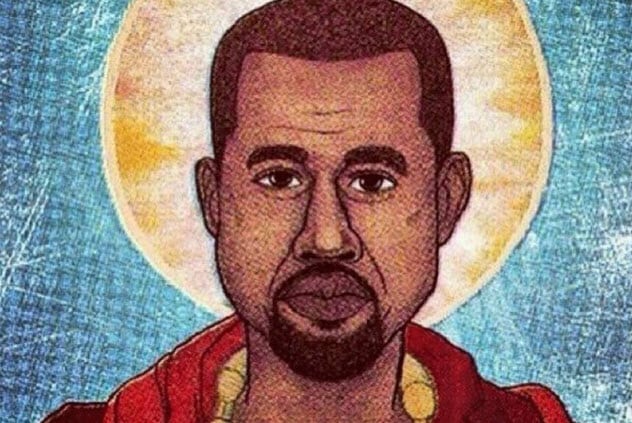 Followers of the Church of Yeezus believe that Kanye West is the god and savior of the human race. The name of the church came from his nickname, Yeezus. However, Kanye does not identify himself with the church. Followers call themselves Ye’ciples. Anyone is allowed to become a Ye’ciple, even if he already has a religion. In fact, members are encouraged to have another religion.[4]

The Church of Yeezus has five commandments. They believe that everything should be created for the good of humanity, everyone should be allowed to express themselves, and money should only be used to buy goods and services. They also believe that we have the ability to create anything we want to and that humans only suffer so they can become more creative. 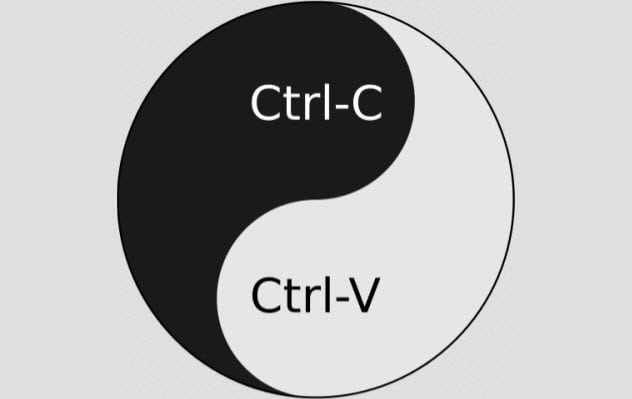 The Missionary Church of Kopimism also proves that we have a lot of weird churches that are not dedicated to the worship of God. This religion is the creation of Swedish national Isaac Gerson who believes that file sharing is an act of appreciation toward the original owner. You know, our little way of telling the creator “thank you.”

Gerson says people should be happy that someone even bothered to share their file instead of trying to get them arrested for infringing on a copyright. Followers of his church believe that copyright laws should not exist and everyone should be allowed to download, copy, and upload files without hindrance.

They believe that information belongs to everyone and should not be hoarded by a few. The church draws a line, though, by saying that it is wrong to spy on other people’s conversations. The Missionary Church of Kopimism does not have a religious book but recognizes Ctrl-C and Ctrl-V as religious symbols.[5] 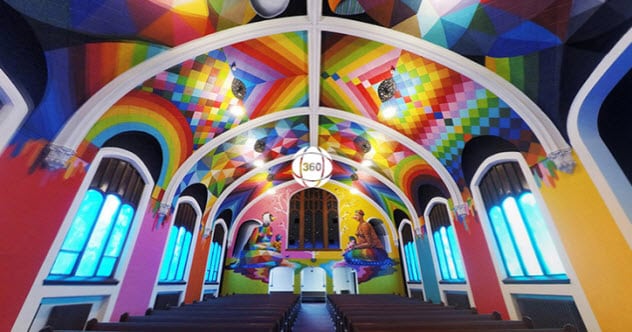 As you can already guess from the name, the activities of the Church of Cannabis revolve around cannabis. There are at least three unrelated Churches of Cannabis operating in the United States—one each in Colorado, Indiana, and Michigan.

Members of the Colorado Church of Cannabis call themselves elevationists because they lift themselves to a better version/person by smoking cannabis. Members of other faiths are allowed to join their worship sessions without leaving their religions.

Cannabis, not a god, binds them together. The church does not have its equivalent of clergymen or religious books. It only has one commandment: Treat others the way you want to be treated.

The First Cannabis Church of Logic and Reason is in Lansing, Michigan. Like the International Church of Cannabis in Colorado, members congregate to smoke cannabis, which is classified as a “religious material” and distributed to members during worship sessions.[6]

The church also accepts cannabis donations from members to share with other members. Although the religion does not claim the existence of a god, members are allowed to believe in any god they want to.

4 Church Of The Flying Spaghetti Monster 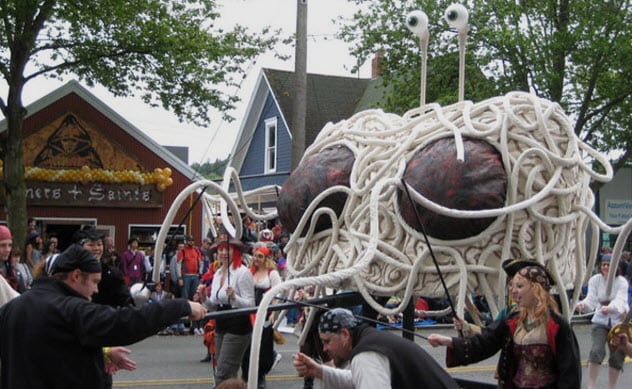 The FSM is a fictional monster made of intertwined strands of spaghetti, two meatballs, and a pair of eyes. The followers, who call themselves Pastafarians, believe that the FSM created the world. He supposedly did this when he was drunk, which is why the world is imperfect.

Pastafarians say that pirates were the first worshipers of the FSM. Apparently, these pirates were good guys who were only given a bad rap by the Christian church. Natural disasters are supposedly the consequences of the reduced number of pirates. The church does not have a strict dogma. It preaches that everyone should lead their lives peacefully without interrupting others’ peaceful lives.

Pastafarians also believe that there is a beer volcano and a stripper factory in heaven. The church forbids abortion, although it has some weird definition of what constitutes abortion. Men who cause damage to their sperm, maybe from wearing tight pants or using hot water Jacuzzis, are said to be guilty of abortion. The church readily accepts members from other faiths.[7] 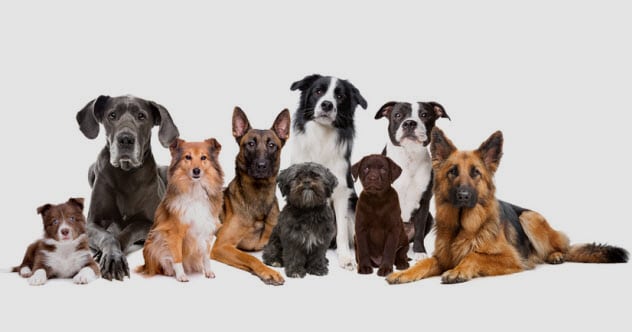 The First Church for Animal Rights was the creation of Diana Belais and Royal Dixon. They held the first meeting at Hotel Astor in New York on March 13, 1921. Over 300 people attended. The church promoted animal rights, stating that animals had the same right to life as humans and should not be killed. The church was supposed to meet at 3:00 PM every Sunday for what The New York Times referred to as “services.”

During these meetings, members were taught how to care for and be considerate toward animals. The church recognized the Christian Bible as its religious book, except it only focused on chapters promoting animal rights.

There is no record that the church held a second meeting. This was probably due to its unpopularity among Christians because of the inclusion of “Church” in its name. Its founders were also Jews, which made it more controversial.[8] 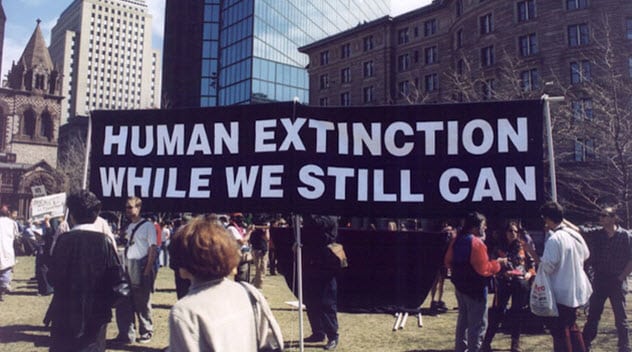 Although it no longer exists, the Church of Euthanasia believed that humanity needed to reduce its birth rate to save the world. This was very evident in its dogma: Save the planet—kill yourself. Followers of the church said that humans were responsible for every environmental problem, such as climate change and erosion. So we needed to depopulate ourselves to save the world.

In its quest to keep the human population down, the church supported cannibalism, abortion, non-vaginal sex, and suicide. It once operated a pro-suicide hotline that people could call to receive suicide instructions if they were willing to kill themselves. The phone company hosting the line realized what was happening and refused to play the recorded message to callers.

The church understood that wars and epidemics were already depopulating the Earth, but it said that was not enough to make a difference. Besides, unwilling people were often killed. The church preferred that willing volunteers die. This religion was founded by Reverend Chris Korda after she dreamed of meeting an alien that warned her about the slow destruction of the Earth.[9]

Despite its radical beliefs, the Church of Euthanasia forbade the consumption of animals. It proposed that all humans become vegetarians. The church had only one commandment: “Thou shalt not procreate.” Ironically, some members flouted this single commandment and got pregnant or got someone else pregnant. They were quickly kicked out of the church. 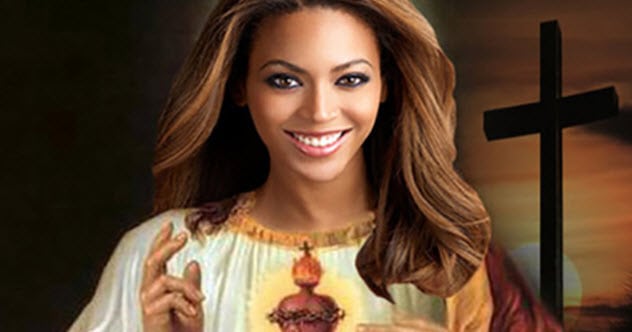 Beyism is another religion formed to worship a musician. This time, it is Beyonce Knowles. The religion has its own church, the National Church of Bey. Although followers of Beyism agree that Beyonce is not a goddess, they say that she is a deity that “sits among the throne of Gods.” She is only in the world to spread the gospel through her music and will leave for her throne once she is done.

Worshipers call Beyonce “Mother Bey” and have their Beyonce-inspired religious book, the Beyble. There is no evidence that Beyonce acknowledges the religion, although the church plans to invite her to speak to the congregation someday. They hold services on Sundays when worshipers meet to sing Beyonce songs.

Beyism and the National Church of Bey were founded by Pauline John Andrews. She created the church and religion after she and some friends met to sing and analyze Beyonce songs. They were drinking and smoking marijuana, which she calls Beyha, during the meeting when the thought of creating the church crossed her mind.[10]

Read about more strange churches on 10 Of The World’s Strangest Churches and Top 10 Haunted Churches And Cathedrals.