Size variation is a defining aspect of animal diversity in the natural world. Even closely related species can vary greatly in size, thanks to unique adaptations and constant environmental pressures. We’re familiar with large animals such as elephants and the blue whale, the largest animal species in the history of Earth. A far greater surprise may come as we examine enormous examples of animas we normally imagine as small. 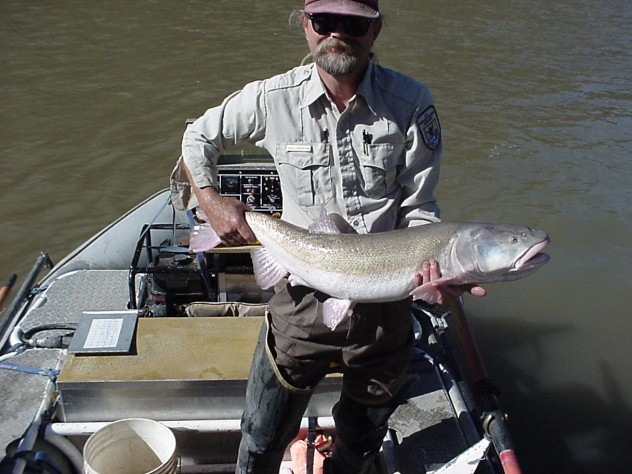 Many children and even adult naturalists enjoy dipping for minnows in a streamside pool. Minnows are the epitome of the “tiddler” or small two-inch fish. But the largest North American minnow is a toothy predator, an endangered species, and quite enormous. The aptly named Colorado pike minnow is an aggressive fish-eater that has been recorded at a whopping 1.8 meters (6 ft) in length. Compared to the other minnow species, this gigantic fish with large jaws is a true big fish in a small pond. It can even weigh up to 35 kilograms (80 lbs). Pike minnows are an endangered species, facing serious threats from habitat damage and changes in water flow. As a result, a recovery program is now in place. 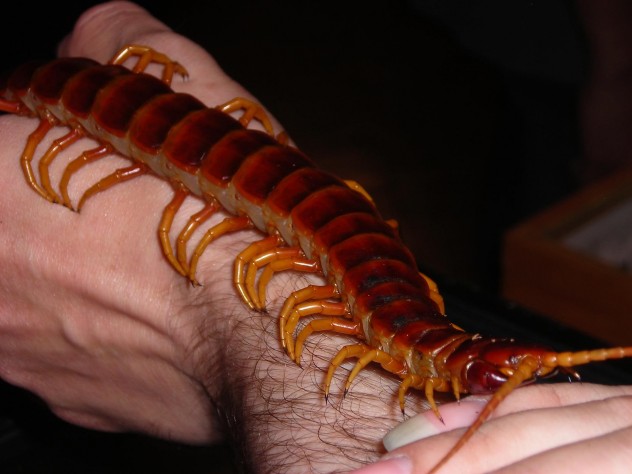 Centipedes can evoke shivers among the bravest of naturalists. With their multitude of legs and wicked fangs, centipedes are ultimate killing machines. When their attention is directed toward humans, the results can be extremely painful. The Jurassic throwback Scolopendra gigantean from Peru clocks in at over 28 centimeters (12 in). This enormous crawling beast uses its powerful fangs to devour both insects and small vertebrates like lizards. While the animal controls pests effectively, a human can be seriously wounded by this potentially aggressive centipede. Few invertebrates on land can boast the combined size, aggression, and bite power of this fast-moving species. 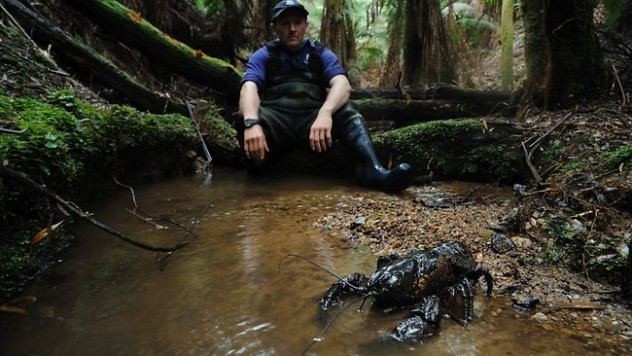 Crayfish may be casually refered to as “toebiters.” These freshwater relatives of lobsters are usually quite small and may not be taken seriously. However, the giant Tasmanian crayfish, sometimes called the river lobster, is enormous—the largest freshwater invertebrate. That said, you should have concern for the survival of this awesome endangered species. Weighing up to 3 kilograms (7 lbs), with a length of nearly 1 meter (3 ft), this gargantuan arthropod stalks the rivers of Tasmania. This animal lies in wait to capture its prey, and its bit could sever fingers. With a black carapace, the creature blends in with rocky river beds river and is not easily seen by its predators, or its prey. But don’t worry, they’re pretty rare. 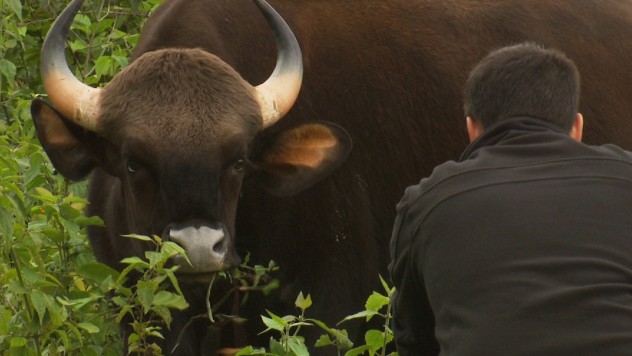 Herbivorous megafauna are typically imagined as a group that includes elephants, rhinoceros, and giraffes. However, one of the most spectacular examples of megafauna is a bovine from India. At 3 meters (10 ft) tall, the gaur is a truly gargantuan beast, and the world’s largest wild cow species. This massive creature with truly formidable horns crashes through Indian forests and fields, and sometimes invades gardens. While it’s a threatened species due to poaching and habitat loss, it’s a match for most threats and weighs up to 1,600 kilograms (3,500 lbs). Among the megafauna that crash and devour their way through tropical vegetation, only the elephants, rhinoceros, and giraffes are bigger or taller. The gaur is more docile than African buffalo, but human fatalities do occur now and then. In one case, a gaur was attacked by a tiger. The gaur responded by literally snapping the tiger in half. 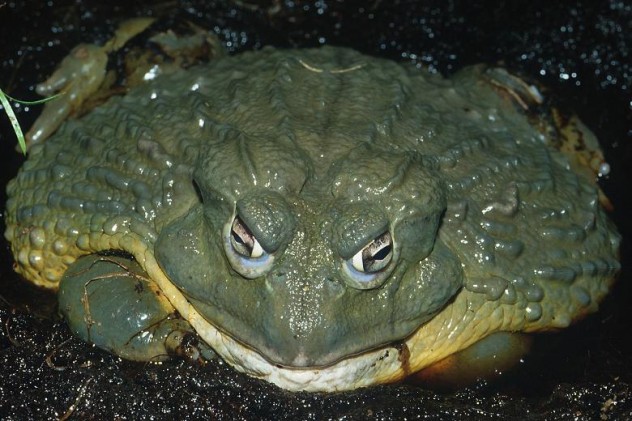 Frogs can sit in your hand, sing in the goldfish pond, and are generally delightful and unassuming. They are little animals—or so we think. Take a trip to West Central Africa’s wetlands, and you’ll find an entirely new frog to shatter your impressions. The truly enormous goliath frog may weigh up to 3 kilograms (7 lbs). This mega-frog often forgoes bugs in favor of young turtles. Its preferred habitat is in the white-water sections of fast-flowing rivers, coupled with shallows where prey can be hunted. This species may be akin to a small dog in proportions to the children who sometimes handle them in their homeland. No other frog comes near this species in size, but the American bullfrog is a close competitor in its dietary voracity because it eats young birds. 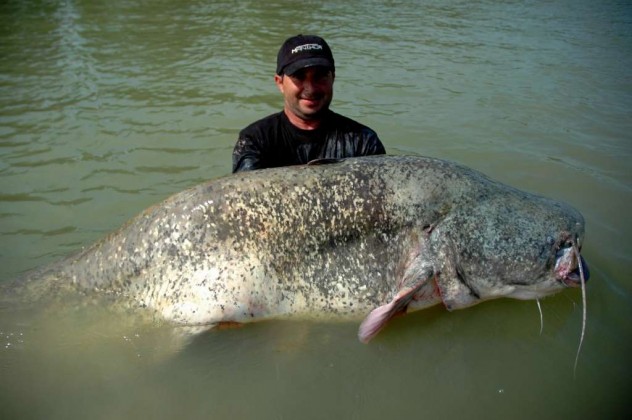 The wels catfish grows to over 3 meters (9 ft) in length, and some European accounts suggest lengths of up to 5 meters (16 ft) before overfishing took its toll. Charges of killing humans have been laid against this giant carnivore. The wels catfish will swallow ducks, and legend has it that humans have been found swallowed. In contrast, the Mekong giant catfish, which is the largest documented catfish species, is harmless to humans—but faces threats from overfishing. The Mekong giant catfish is part of the so-called “shark catfish family,” and is equally large, along with the more aggressive South American catfish. 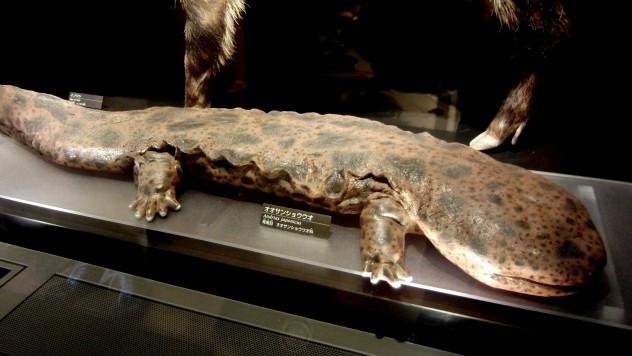 While the Japanese giant salamander has a reputation as a “water monster,” it is the Chinese giant salamander that is the largest amphibian on Earth. It’s also one of the most disturbing to encounter while wading. While you might be stalked until it is obvious you are not food, you are not in danger. Tiny eyes give way to a much more powerful sense of smell and its length is an enormous 1.8 meters (6 ft), making the Chinese giant salamander the largest present-day amphibian. Its prey includes a range of aquatic animals. The males are family creatures and aggressively defend the eggs until they hatch. The great salamanders may make a “crying” sound and are highly endangered by habitat loss and poaching. 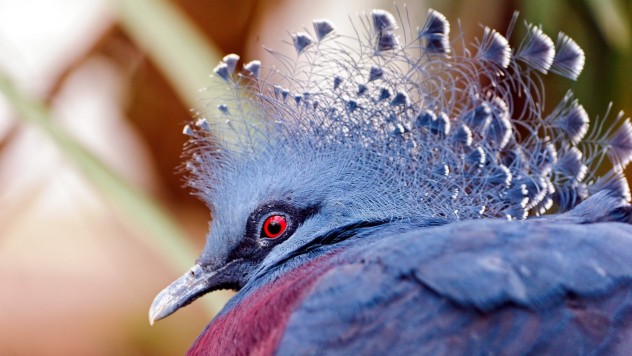 The Crown Victoria is a famous sedan used by police forces, while the city pigeon is a rather humble bird. But the world’s largest living pigeon is a truly immense and spectacular bird. The name is simply reversed: The Victoria crowned pigeon hails from the New Guinea region, and possesses dazzling, deep-blue plumage with a peacock-like crest. The supersized and highly ornate pigeon measures nearly a meter (3 ft) in length, and weighs up to 3.6 kilograms (8 lbs). The bird is nearly three times the size of a familiar city pigeon. Fruits, nuts, and berries make up the mainstay of this bird’s diet. Although it can fly, its mastery of the air is more limited than many pigeons, which have a more tree-dependent lifestyle. 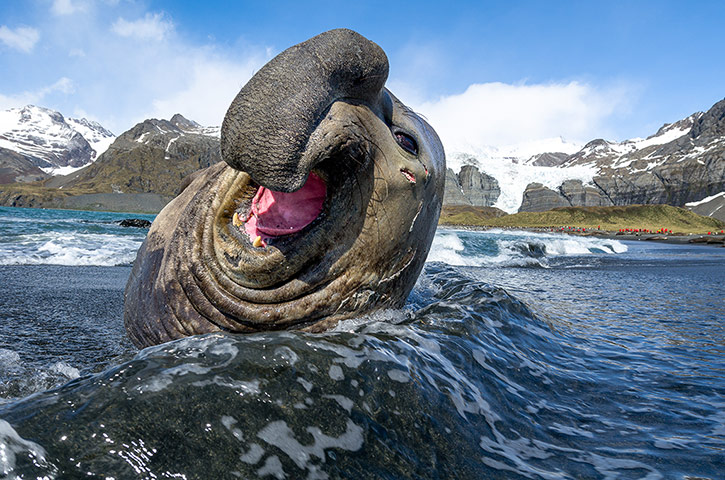 The world’s largest carnivore, the enormous southern elephant seal can weigh an unbelievable 5,000 kilograms (11,000 lbs) and reach a length of over 6 meters (22 ft). Fortunately, this species is adapted to eat seafood, and humans are not in the cards as far as dinner is concerned. However, worrying confrontations have occurred, and you definitely don’t want to tangle with a canine-equipped carnivore that’s a whopping 70 times your weight! Males may weigh nearly three times as much as females in a remarkable show of sexual dimorphism. The animals possess massive, elephant-like proboscises on their noses and can produce unearthly bellowing sounds. 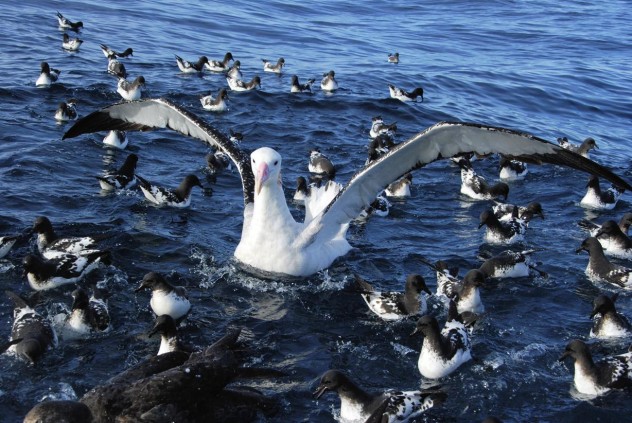 The albatross is the world’s largest seabird. Of the 21 species of albatross worldwide, the wandering albatross is the largest, with its wingspan of up to 3.5 meters (11 ft), and a weight of up to 13 kilograms (28 lbs). The combination of weight on these wings creates the effect of a natural sailplane. In fact, gliders could be thought of as a reverse-engineered albatross. This king of seabirds has mastered the art of using mass to drive momentum. In one case, this species was believed to have covered 6,000 kilometers (3,728 mi) in only 12 days. The birds feed by night on a range of prey, including squid and surface fish. No bird has a greater wingspan.

Ron Harlan investigates of the mysteries of nature and the bizarre findings that often crop up on this planet. Ron is a freelance writer, avid naturalist and graduate student of science.