Norse mythology teems with gods, goddesses, giants, dwarfs, elves, and all kinds of unearthly creatures. With the more well-known gods and goddesses getting a lot of exposure through movies like Thor, and cult TV shows like Supernatural and The Almighty Johnsons, a lot of the lesser-known Norse deities and their fascinating backstories get a bit snowed under. Many of them are just as interesting as your regular Odins and Freyjas. 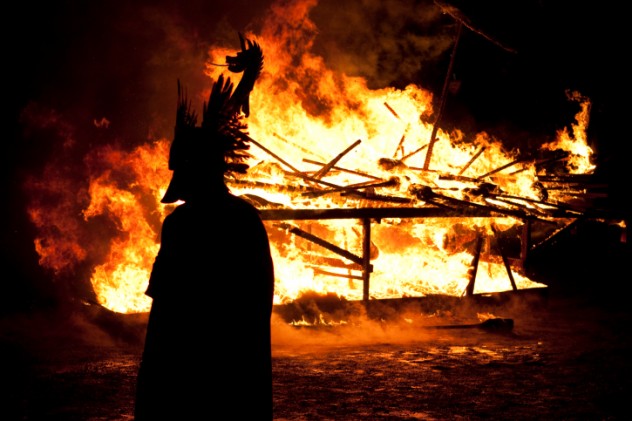 Hoenir, brother of Odin, was a god known for his indecisive nature. After the war between the Aesir (the warrior gods) and the Vanir (the fertility gods) ended in a World War I–style stalemate, with the Vanir camped right outside the great wall of Asgard, Hoenir was part of a hostage exchange to seal a shaky truce. Together with Mímir, who we’ll talk about in a minute, Hoenir was sent to Vanaheim, where he was given a leadership position. Later, things went south for Hoenir when the Vanir discovered he relied so heavily on Mímir’s advice that he was pretty much useless any time Mímir was off somewhere else. Apparently Hoenir’s indecisive nature paid off in the end, as he was one of the few Norse deities that survived Ragnarok, the Norse equivalent of the apocalypse. 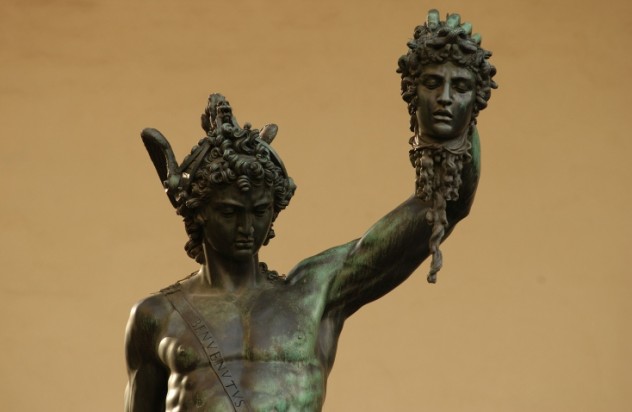 Mímir, being a particularly wise deity, was the counselor of the gods. He owned a well, the Mímisbrunnr, the water of which granted wisdom and the power to see into the future. Odin sacrificed one of his eyes for a drink from the Mímisbrunnr.

After Mímir became part of the hostage exchange and his fellow hostage Hoenir messed up, Mímir paid the price and was beheaded by the Vanir. Odin managed to swipe the head from Vanir territory. He embalmed and bewitched it—making sure Mímir could still advise him, even in his decapitated state. 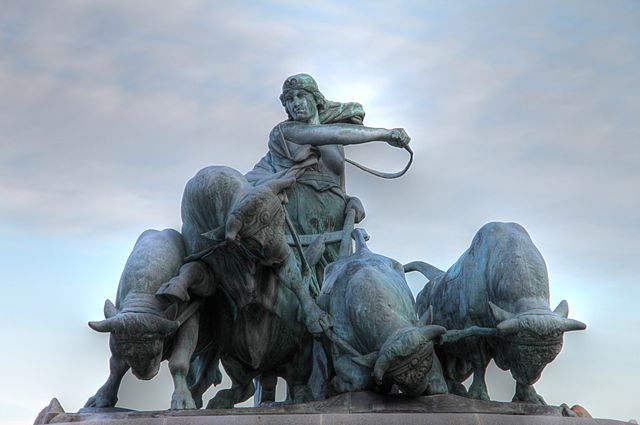 Being a fertility goddess associated with vegetation and fertility, the oh-so-unambiguous symbol for Gefion is a plow. In Norse mythology, Gefion was sent out to find more land for Odin. She convinced King Gylfi of Sweden to promise her as much of his land as she could plow in 24 hours using four oxen. Gefion popped down to Jötunheimr and quickly had four sons with a giant. She turned her offspring into four strong oxen and used them to pull her plow.

By digging up the earth and throwing it into the sea, they created Lake Mälaren and the island of Sjaelland. After 24 hours of hard work, Gefjon went to live on Sjaelland and got hitched to Odin’s son, Skjöld. With him, she had some more kids, whom she presumably didn’t turn into oxen, because they went on to become Denmark’s royal family. 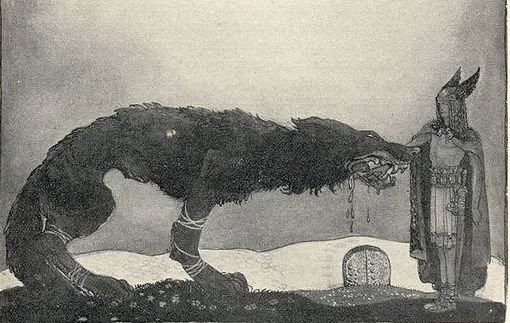 Before Odin came along, there was Týr, a mighty warrior god. In the Viking Age people had all but forgotten about him, which is a shame, because there are some interesting tales surrounding this particular god. A good example is the binding of Fenrir. The result of a one night stand between Loki and a frost giantess, Fenrir was a savage wolf-creature that wreaked havoc wherever he went. The gods decided to use a magical cord to capture the beast for their own safety. Fenrir would only allow this if one of the gods put a hand in his mouth as a sign of good faith. Týr, being the brave and honorable warrior that he was, complied—and of course ended up with one of his hands bitten clean off when Fenrir realized the magical cord was so magical that he couldn’t break free. 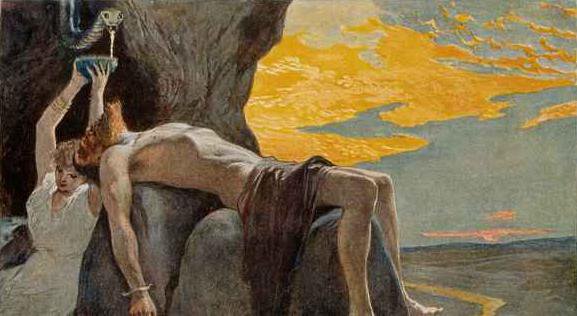 Sigyn, long-suffering wife of trickster god and serial adulterer Loki, isn’t mentioned a lot in Norse mythology. She’s mostly known as the one who kept Loki company during his punishment for killing the god Baldur. Loki was trapped under three large boulders and bound with his own son’s entrails, a snake dripping venom positioned right above him. Sigyn sat next to her husband holding a bowl to catch the venom, and stayed there until the bowl was filled to the brim. Eventually she had to leave to empty the bowl and the inevitable happened—Loki got a faceful of snake venom. It is said that Loki thrashed and struggled so hard he caused earthquakes. 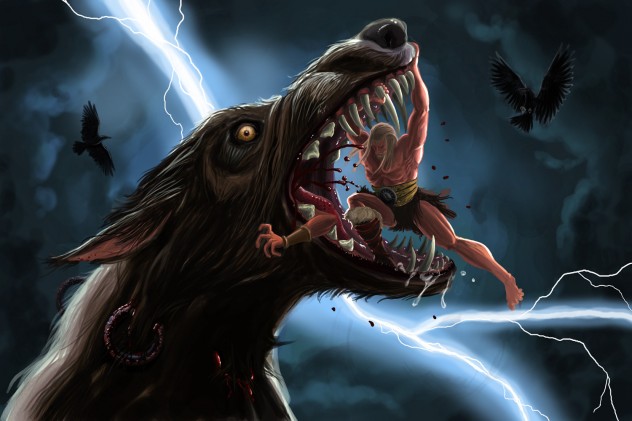 Still waters run deep. This is definitely the case when it comes to Vidar, nicknamed “the Silent God.” Never uttering a word, this son of Odin had one purpose in life—to kill the wolf Fenrir after the beast had gobbled up Odin during Ragnarok. Vidar lived in the wide green lands, carrying a sword and wearing a gigantic leather shoe. This particular shoe is said to have been made of spare pieces of leather Vidar collected throughout the ages, resulting in footwear so strong it could withstand Fenrir’s razor-sharp canines. Vidar will not rest until he has taken his revenge by ripping the wolf to pieces. 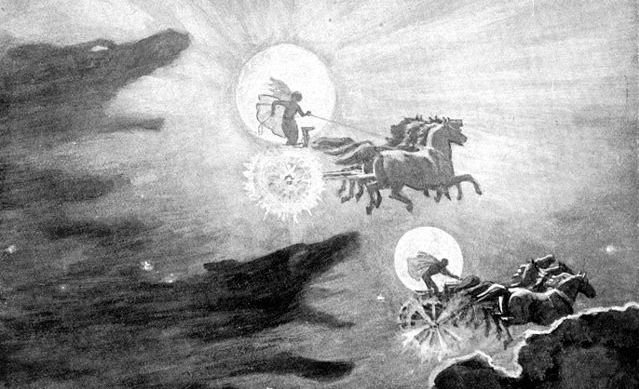 Norse mythology has interesting stories to tell about the rising and setting of both sun and moon. Sól, the sun goddess, is supposedly being chased through the sky by a wolf, Sköll. The same is true for her brother Mani, code name Moon, whose wolfish pursuer is called Hati.

Sól rides in a large chariot, drawn by two mighty horses called “Early Riser” and “All Swift.” Sometimes Sköll would catch up with Sól and her chariot, causing an eclipse, but so far the horses have been able to outrun the wolf. When Sköll and Sól, Mani and Hati, finally meet, the bloody consequences will lead to Ragnarok. 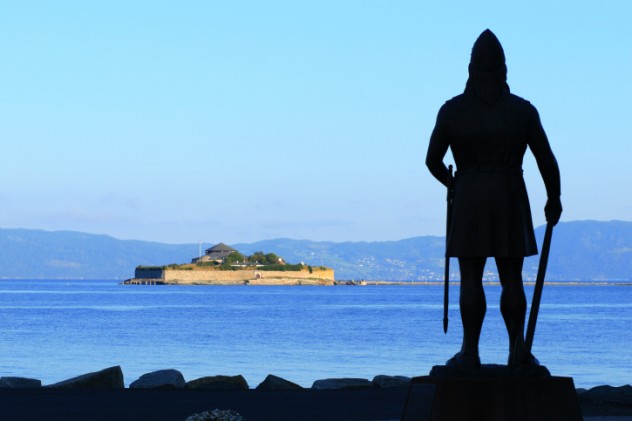 Loki killing Baldur affected gods and goddesses in the entire Norse pantheon, including the minor ones. Apart from Sigyn, who basically spent the rest of her life catching venom, the god Hermod also got a new purpose after Baldur’s death. Hermod, one of the sons of Odin, was sent down to the underworld to plead for Baldur’s release. The goddess Hel, ruler of the underworld, told Hermod that if every single living thing wept for Baldur to show how much he was loved and missed, she would set him free.

For a while it looked like Hermod would succeed: Even the stones and the trees shed tears for Baldur. But Norse mythology wouldn’t be Norse mythology without unhappy endings. The last one to supply tears in exchange for Baldur’s freedom was the giantess Thokk. She straight up refused, either because giantesses aren’t familiar with the concept of tears, or because Thokk was secretly Loki in disguise (probably both). Hermod failed in his mission, and Baldur’s resurrection was canceled. 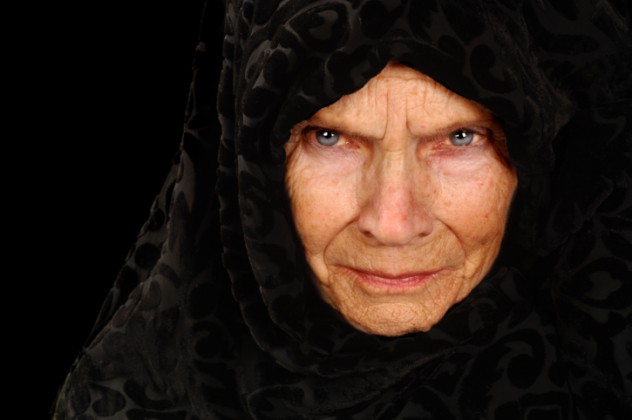 There are a lot of strong goddesses to be found in Norse mythology, but the goddess Elli, nicknamed “the Giant Crone,” takes the cake. To illustrate: She challenged the god Thor to a wrestling match—and won. We have to be fair to Thor though, as the whole thing turned out to be a bit of a trick. Elli, although the weakest of the giantesses of Utgardr, was actually the personification of old age. After the giantesses told Thor about their stunt, he obviously wasn’t too happy, even though the fact that Elli only managed to get Thor down to one knee was a mark of his strength. 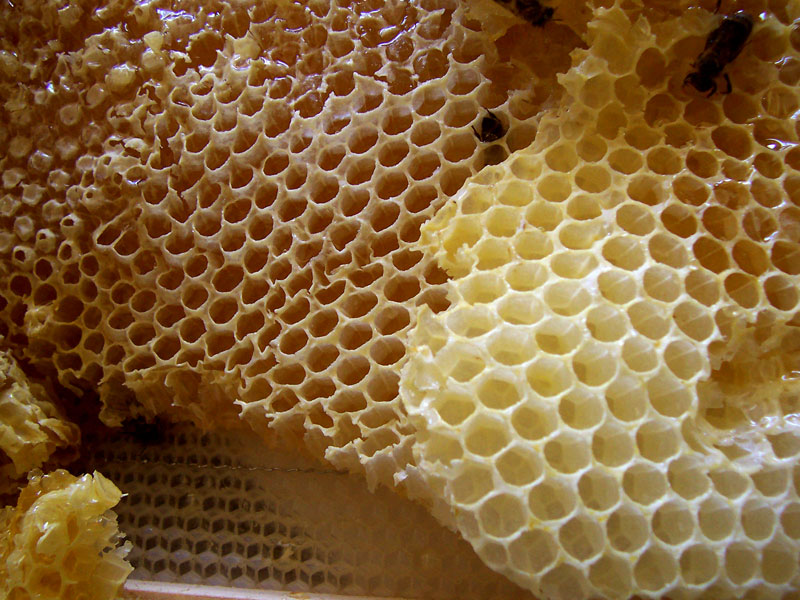 Remember the truce between the Aesir and the Vanir we started with? Not only did the two parties seal the peace by exchanging hostages, they also decided to collectively spit into a bowl. Out of this, slightly disgusting, but powerful mixture, Odin created the god Kvasir, whose name literally means saliva. Because Kvasir was essentially a combination of all the gods, he was a very powerful and wise deity. And we all know what happens to especially powerful and wise gods within Norse mythology . . .

Not long after his creation, Kvasir was brutally murdered by a couple of dwarfs who were after his blood. The dwarfs, with the help of a giant, mixed Kvasir’s blood with honey and let this potion ferment to create Kvas, the Mead of Inspiration. It is said that the mead supplied wisdom to whoever drank it, so naturally Odin claimed it all for himself.