The risk with writing a list about spiders and their terrifying cousins is that half of you are going to scream and throw shoes at your computer monitor, rather than read anything. After all, the only thing these freaky, disgusting arachnids want to do is eat your face. Specifically your face, person reading this right now. But if you overlook that, you’ll find that these little critters actually display surprising intelligence and sociability. There are also a few that are the very definition of horror, so feel free to keep that footwear to hand. 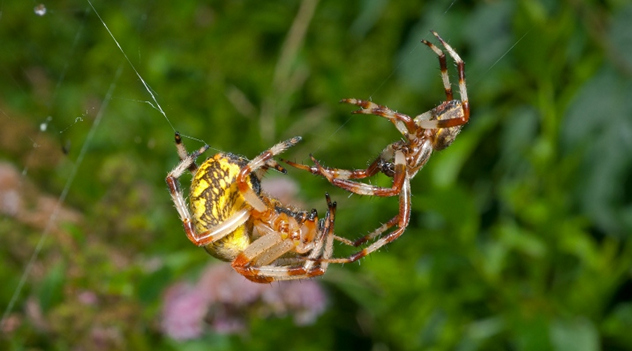 We mentioned before that females eat males. That seems to make sense—the male is giving up any future chance to breed, but by giving the female spider a good meal there’s more chance she’ll carry eggs to maturity. The spider Micaria sociabilis turns this on its head, as 20 percent of mating encounters result in the male eating the female. They’re not the only species known to display this behavior, but there’s no obvious explanation for why it happens.

Researchers in the Czech Republic hoped to find an answer by noting which females end up being eaten. Micaria sociabilis produce two generations of young each year: one in spring and one in summer. When males were mixed with females from both groups, they were far more likely to munch on the older females, and let their younger mates go. Using older females as food to increase their chance of mating with younger females later is a strategy that seems to work, as the younger females are more likely to produce offspring. 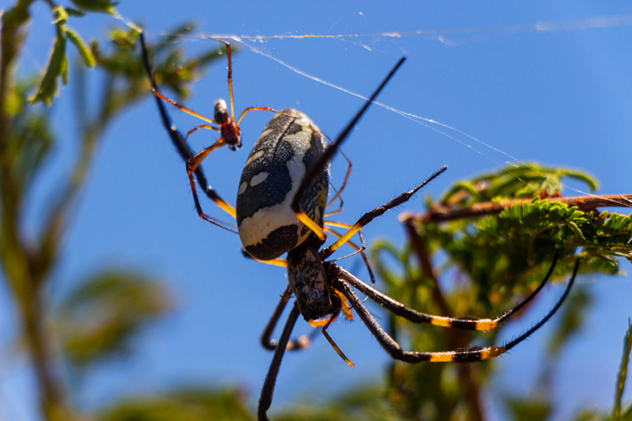 Considering the bad reputation of the black widow, any spider with “black” in its name is suspect straight away. The black-lace weaver spider is no exception—it has a pretty unpleasant way of entering the world. When its spiderlings hatch, the mother encourages them to devour her alive. When they finish, they take over her web, and hunt in packs to take down prey 20 times their size. The youngsters also ward off predators by contracting their bodies in unison to make the web pulsate.

Another spider that eats its mother is Stegodyphus lineatus. Its youngsters spend a while living on regurgitated liquid from their mother. Eventually, they liquefy her insides and drink them—all with her encouragement. Common names for arachnids are often woefully inaccurate. The whip spider, also known as the tailless whip scorpion, is neither a spider nor a scorpion. It’s a different order of arachnid altogether, known as Amblypygi. These eight-legged creatures resemble a sort of spider-scorpion hybrid, but with whips. If that description doesn’t make you think of cuddles, then allow us to introduce Florida’s Phrynus marginemaculatus and Damon diadema from Tanzania.

Researchers at Cornell found that these species of whip spider liked to live together in family groups. Siblings and their mother gathered together when researchers separated them. The groups act aggressively to outsiders, and spend their time constantly stroking and caressing each other. Scientists think that sticking together might help the amblypygids deter predators, and allow the mothers to protect their young broods. 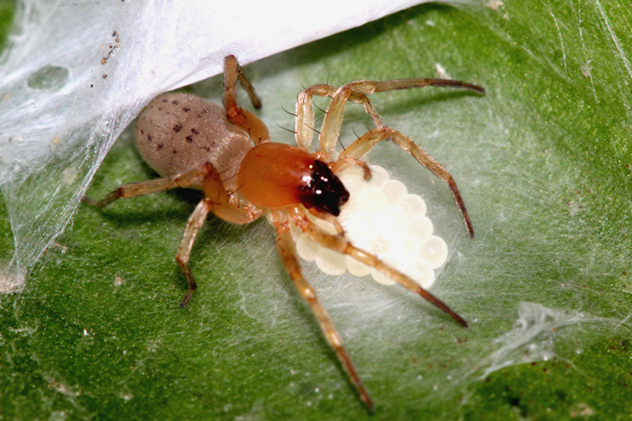 What do spider fathers contribute to their children? Of course, there are a bunch that simply offer their body to the mother as a handy snack. That’s the lazy way out. Tropical harvestman dads are more involved: They take over the role of guarding a nest of eggs once a female has laid them. Without the males playing sentinel, the eggs simply don’t survive. The spiders fend off ants, make repairs to the nest, and clear away fungus—possibly for several months.

This method is good for the males in a few ways. For one, it impresses lady spiders. Males can look after eggs from up to 15 mates at a time. Scientists have also found these caretaker spiders have a higher chance of survival compared to their less responsible brethren. This is probably because hanging around in the same spot keeps them out of the way of animals that like to munch on spiders, especially since the females kindly leave behind a mucus that helps to repel predators from the nest.

6Assigning Tasks Based On Personalities 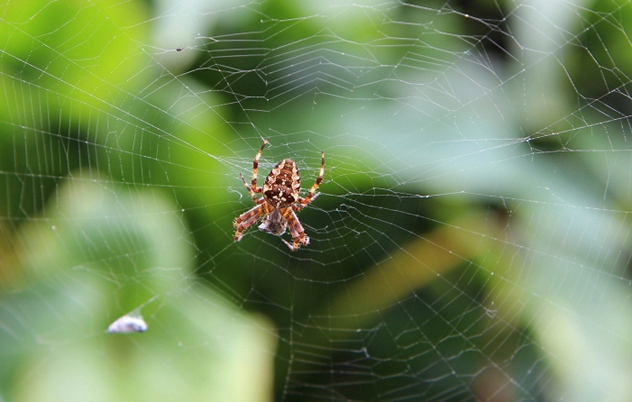 While we’re on the subject of the genus Stegodyphus, let us introduce Stegodyphus sarasinorum. While they also liquefy their mother’s insides and drink her, they also have the interesting trait of living in colonies that divide up jobs to those with the most suitable personality. Scientists tested the aggression and boldness of spiders by wafting them and poking them with sticks. They marked the spiders with colored patterns to track individuals. The researchers then let the spiders build themselves a colony.

Next, the team had to test to see which spiders would come out to investigate struggling insects stuck on their web. The spiders react to the vibrations that travel through the web when insects writhe around. Shaking the colony by hand would produce too much variation, so the scientists opted for an electronic device, designed to produce consistent vibrations. A small, pink device called Minivibe Bubbles. We’ll let you figure out what it was originally designed for.

The scientists found that the spiders that rushed out to get the prey were the ones that had shown more aggressive personalities earlier. This seems to make sense, and this sort of task specialization can benefit spider colonies in much the same way it benefits human society.

5Courting In Just The Right Way 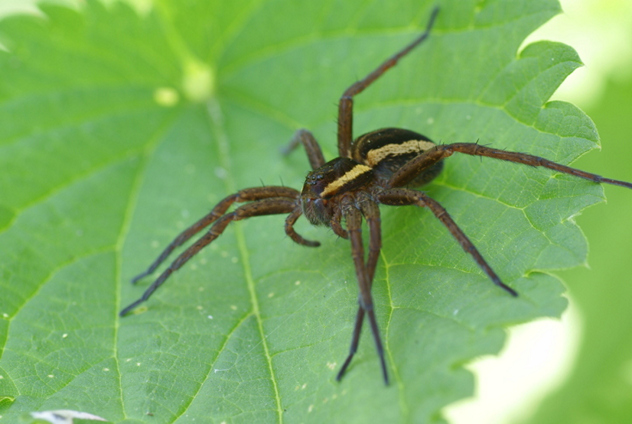 Male wolf spiders put a lot of effort into making the right first impression with the ladies. The key to their success is, as with humans, effective communication. A couple of different studies have shown how male wolf spiders change the way they signal potential mates for maximum effect.

Researchers from the University of Cincinnati put male wolf spiders in different environments—rocks, soil, wood, and leaves—and found their signaling vibrations were most effective in a leafy environment. In a second set of tests they give the spiders a choice, and found the arachnids spent longer signaling on the leaves than the other materials. In addition, the spiders relied less on vibration and tried visual displays, like raising their legs, when on the less ideal surfaces.

Changing how to communicate is not the only trick up a wolf spider’s eight sleeves. Scientists from Ohio State University spotted that spiders in the wild appeared to be copying their rivals, in an attempt to achieve mating success. To test this, scientists captured some wild males and showed them a video of another male spider in a mating ritual. The test subjects duly copied. This ability to eavesdrop and react accordingly is a complex behavior not often seen in small invertebrates.

Social spiders, who live together in colonies, are rare. Yet scientists have discovered a colony consisting of two different species living together. The spiders are both from the genus Chikunia, making each species as related to one another as wolves are to coyotes, or modern humans are to Homo erectus. Lena Grinsted, a researcher from Denmark, discovered the unusual arrangement when she was performing experiments to see if females would reliably protect the broods of other females.

It soon became clear that there were two species of spiders in the colony she was investigating. The revelation came about following genetic analysis and the discovery of notable differences in the genitals of the species. It’s not clear what advantage the species get from living together, as neither really brings anything different to the party. They don’t hunt together, and can’t interbreed. The only apparent benefit is mutual childcare, as females appear happy to watch the spiderlings of either species. 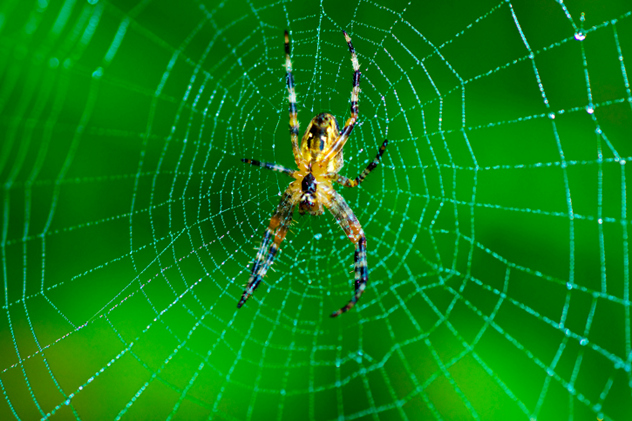 Most of the arachnids on this list that live in colonies also hunt in groups. The colonial orb-web spider is different—it lives in a colony, but hunts alone. During the day, hundreds of spiders relax in a central web, suspended between trees and bushes by a large number of threads. At night, when it’s time to hunt, the spiders build their own orb webs on the long threads in order to catch insects.

When an individual has picked a spot and built its web, it doesn’t want other spiders to come in and share it. If another colony member approaches, the builder bounces on the web to scare off the newcomer. Normally, intruders will take note and head off to find somewhere new—but this changes once all the good spots have been taken.

With no space left, the orb weavers without a web will ignore the bouncing and stick around near one of the other webs. The web builder won’t attack, and the interloper will normally be able to pinch a meal from the other spider’s hard work. Yet they never fight, because it’s not worth it—the threatening bounce is more a friendly “have you checked everywhere else yet?” 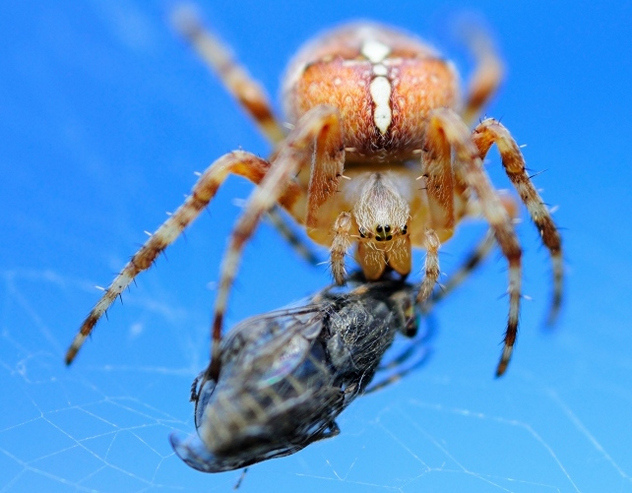 When a male nursery web spider spots a female with whom he’d like to mate, he tries to make an impression with a gift. This normally comes in the form of a dead insect, which demonstrates his ability to catch food (and hence his good genes). The spiders even wrap their gifts up first, though they’re missing an opportunity by not including a littler spider-silk bow. On average, spiders that don’t give a gift get 10 percent of the mating time of their more generous competitors.

Sometimes a tasty fly can be hard to come by, or it might be so delicious the male spider may eat it before he gets the chance to give it to his new love. In that case, he’ll just wrap up the empty insect carcass, or any other bit of similarly sized rubbish that is lying around. This works, to an extent—spiders presenting fake gifts get more time than those with nothing. However, the females figure out the deception and still give the males less time to deposit sperm than those that brought an edible present. 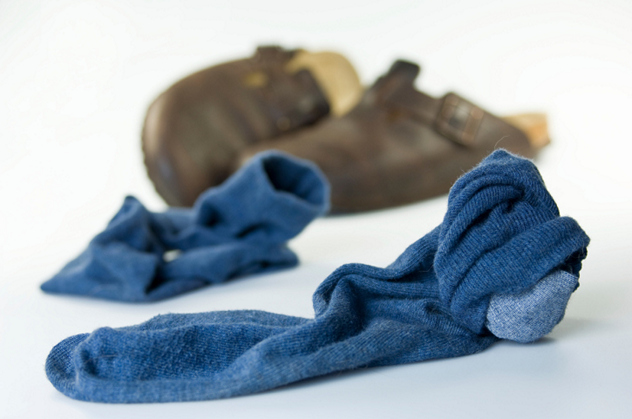 Evarcha culicivora, otherwise known as the vampire spider, is rather unusual. It gets its name because it sparkles in sunlight, and . . . oh, no, apparently it’s because it likes to feast on human blood. While that might sound like a terrible thing, one of the spider’s most interesting traits is that it gets its meal indirectly—by devouring mosquitoes that have just finished sucking on human prey. The vampire spider is the only animal known to choose its prey based on what the prey has just eaten.

When it gets a sniff of blood, the spider goes into a violent frenzy, killing up to 20 mosquitoes. This makes the vampire spider potentially useful—the species of mosquito it kills, Anopheles gambiae, carries malaria. By controlling mosquito populations, the spider helps save lives.

Because its dinner hangs around humans, so does the spider. It’s attracted to the smell of human settlements, including dirty socks. Scientists did an experiment where they put vampire spiders in a box, either with a dirty sock or a clean one. They hung around longer when the sock had been used. The researchers hope this knowledge might help them attract spider populations to keep mosquitoes under control.