Pitting animals against other animals remains a hot topic today. Blood sports, as they are called, are illegal in many countries, although they remain legal in some. A few centuries back, they were perfectly legal and were a pastime. Humans even bred some animals specifically for blood sports. 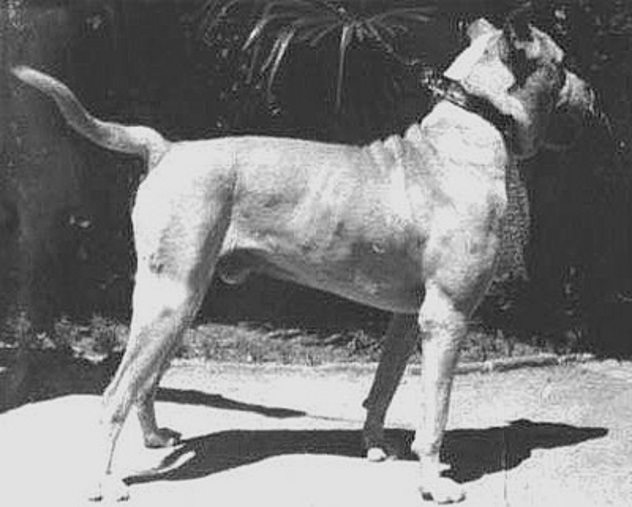 The Cordoba Fighting Dog is an extinct breed of dog specifically bred for dog fighting. It was bred in Cordoba, Argentina, which is where it got its name. It is believed to have been created by crossbreeding Spanish fighting mastiffs and bulldogs with Bull Terriers. The Cordoba Fighting Dog was beloved among dog fighters for its agility and aggressiveness. It readily took on other dogs and even bigger wild animals like pumas.

The Cordoba Fighting Dog was very aggressive. Males would even attack and kill females while mating. Humans were not spared, either, since the dog was equally aggressive toward people. The dog was sometimes used for hunting but never in packs, since they would rather fight than hunt. So, it was usually suggested that only a male and female should be used for hunting. Even at that, there was no guarantee that they would not fight.

The low reproduction rate and high mortality rate of the Cordoba Fighting Dog, which often fought to the death, meant they had a relatively low population. However, the dog finally went extinct when dog fighting was outlawed.[1] 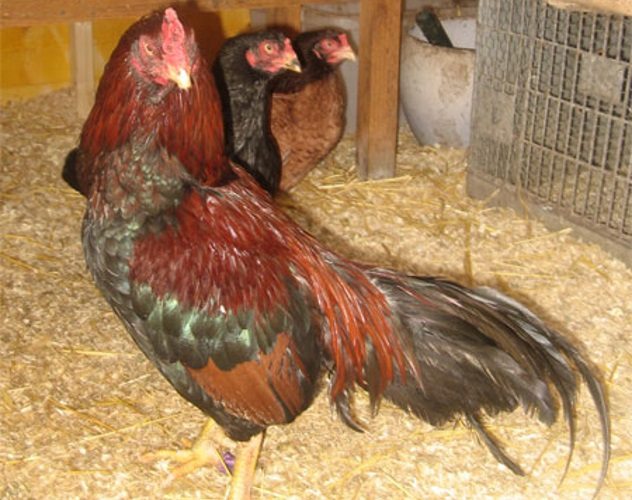 The Asil (sometimes called Aseel) chicken is the oldest chicken breed used for cockfighting. It was first bred for cockfighting in India over 2,000 years ago and has been improved over the centuries. The Asil is a hard fighter. Two millennia of breeding has seen it develop spurs perfectly suited for cockfights. Unlike other cocks, they do not wear artificial spurs during fights.[2] They use their natural spurs covered in tape.

Asil birds have strong legs, beaks, and bones as well as thick necks. They are also very aggressive and will remain in a fight for days. Defeat is never an option. They are also pretty weighty. The average Asil cock weighs between 1.8 and 2.7 kilograms (4–6 lb). This makes them hard hitters, although it also makes them slow. Young Asil birds are also aggressive like their adult counterparts. They’ll naturally start training and holding mock fights when they are a few weeks old. 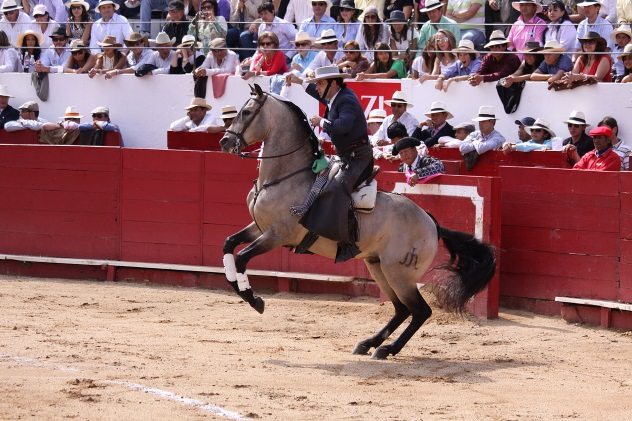 One little-known fact about Spanish bullfights is that during the fight, a matador, called a picador, atop a horse uses his pike to wound the animal’s neck and weaken it. The bulls used for the fight are almost always killed in the end. A bull is sometimes spared if it fights exceptionally well, but that is rare. The Lusitano horse is one of the few breeds of horses used by the picador.

Sometimes, they are blindfolded and don’t see the bull, while other times, they aren’t blindfolded and are left to skillfully dodge the bull’s horns as the picador tries to stab it. Lusitano horses are favored because of their bravery, calmness, and swiftness. They do not run away like other horses and will even move toward the bull.[3]

Cagancho is one famous Lusitano horse. In a career spanning over 11 years, he fought more than 1,000 bulls in over 300 bullfights in Spain, Portugal, Mexico, and France. Horses are usually killed when they become too old to grace the rings, but Cagancho was spared and allowed to live. He retired in 2002 and died of a stroke in 2015. 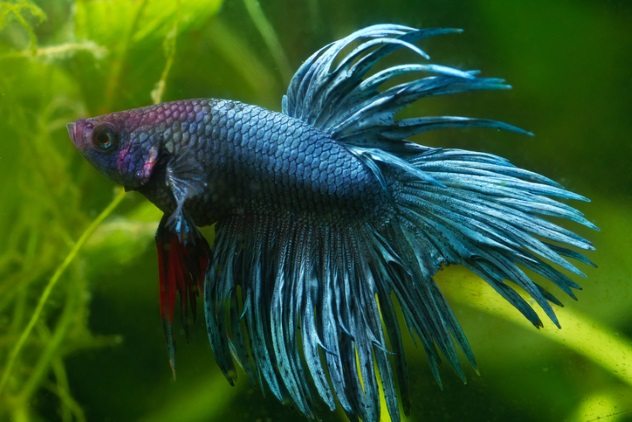 The Betta fish is also known as the Siamese fighting fish because it was bred for fighting in Siam (today’s Thailand). Even their name was derived from the name of a warrior tribe called the Bettah. Bettas have been used for fish fighting since the 1800s, when the people of Siam realized that the fish would fight when put together. The fights usually lasted for few minutes until one retreated, but people soon started breeding them for fighting.

First, they made the fish fight until there was a winner. The winner was usually the biggest fish, and it would be taken off fights until its wounds healed. Then, it would be made to face other champions. The fish that once only fought for a few minutes at most would engage in fights that lasted for hours. The winner was not the most injured fish but the one that still wanted to remain in the fight while the loser retreated.

In the past, substantial bets were placed on the fights. This could range from money to houses and even family members. Some men even gambled their wives. Betta fights were so popular in Siam that the king started licensing the fish. The fish are still bred and used for fighting today, and it is common for fighters to be discarded after the fights.[4] 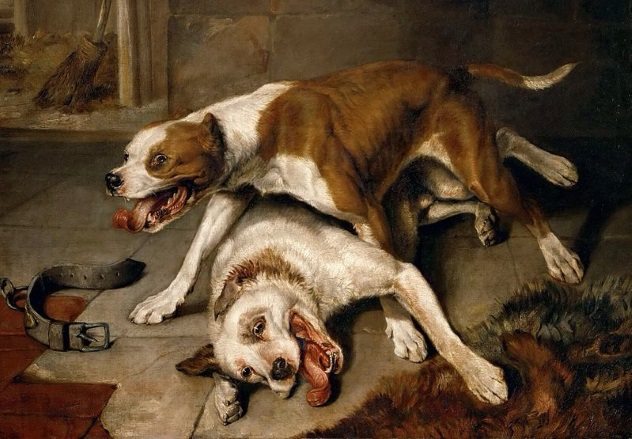 The Bull and Terrier (not to be confused with the Bull Terrier) was a fighting dog bred by crossing a bulldog with a terrier. It is the predecessor of the modern Bull Terrier, among other breeds. Dog fighting became the go-to sport when bullbaiting was made illegal in England in 1835. Fighters moved to breed a fast and light dog that could remain in prolonged fights, since dog fighting took longer than bullbaiting. At the same time, the dog needed to be so small that it could be more easily hidden if the police ever arrived at the fighting scene.

This made them cross the Olde Type Bulldog with different terriers. The result was a dog that was as fast and alert as the terrier but with the power and high pain threshold of the bulldog. It fought to death. In 1850, James Hink crossbred the Bull and Terrier with other dogs to create the Bull Terrier. Unlike its predecessor, the Bull Terrier had a longer head and didn’t have bow legs. Before it was called the Bull Terrier, it was called other names, like the Hinks Breed and the White Cavalier.[5] 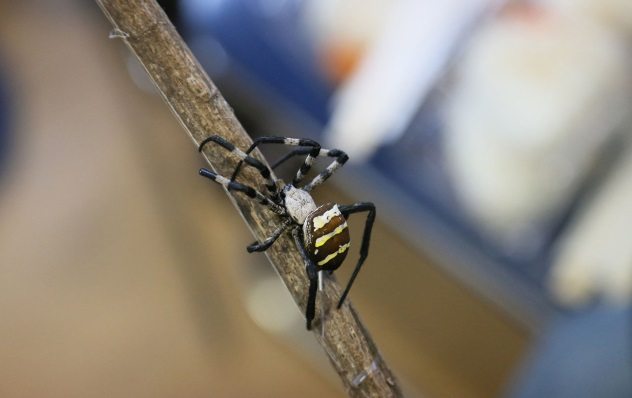 In June every year, residents of the city of Kajiki, Kagoshima, Japan, hold spider battles, which are called kumo gassen. The fights, which have been held for over 400 years, involve pitting two female Argiope amoena spiders, which are also called samurai spiders, against each other. Prior to the competition, contestants either capture or buy the spiders and start training them in preparation for the fight.

The spiders do not fight to death, and there is always a human referee to separate them whenever a fight becomes messy. Spiders can win a fight in one of three ways: when they bite first, when they capture their opponent with their web, or when they destroy their opponent’s web.[6] The first spider battle was believed to have been organized by Japanese military commander Shimazu Yoshihiro to raise the morale of his men. 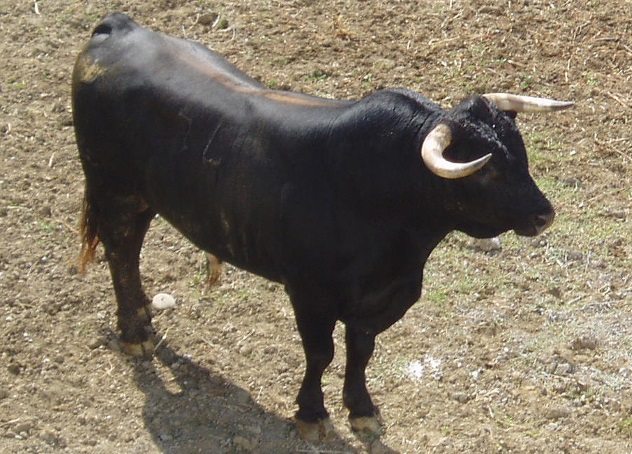 Miura bulls are one of the most hardened of all Spanish fighting bulls. They are bred on a cattle ranch in Seville, Spain, which was originally owned by Don Eduardo Miura Fernandez. Fernandez was the first person to breed the bull, which is why they are named after him. The first Miura bull graced the bullring on April 30, 1849.

Miura bulls are known for being big and aggressive. Some have even made names for themselves.

One such bull is Murcielago, which survived 24 stabbings from a picador in 1879. The bull was later spared. Then, there are Reventon and Islero, which killed bullfighters inside the ring. Automaker Lamborghini has named its vehicles after Miura bulls. There are also claims that Ferruccio Lamborghini made his famous Lamborghini bull logo after visiting the Miura ranch.[7] 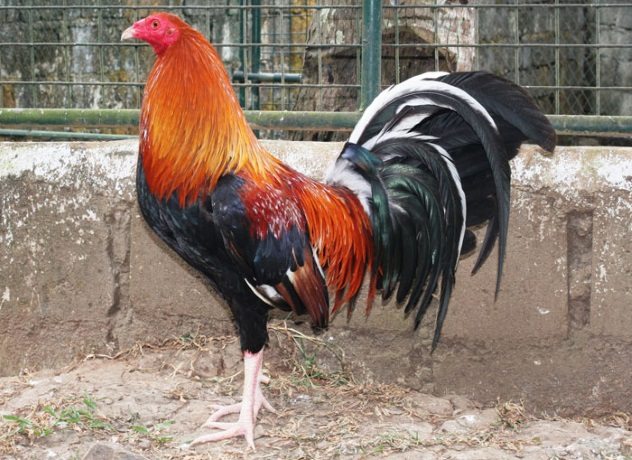 Kelso cocks are a breed of cockfighting chickens originally bred by Walter Kelso. Kelso created the gene pool by buying winning cocks after fights and crossbreeding them with other hens. This was in a time when breeders maintained pure breeds, which they believed were the best for cockfighting. Kelso, on the other hand, tried as much as possible to ensure that all his cocks were crossbreeds.

Whenever Kelso got a new cock, he bred it with the sister of any of his winning birds. If the new cocks were good fighters, he would keep their sisters and crossbreed them with any new acquisition he got. When his friend, John Madigen, another famous cock breeder, died in 1942, Kelso and fellow breeder Bill Japhet inherited his cocks and crossbred them with their stock.

These days, the Kelso cock has its own subbreeds. In the Philippines, there is the Firebird Kelso, which are bred by Sir Biboy Enriquez, who is regarded as “the Kelso Man of the Philippines.” There is also the Dink Kelso and the Out and Out Kelso.[8] 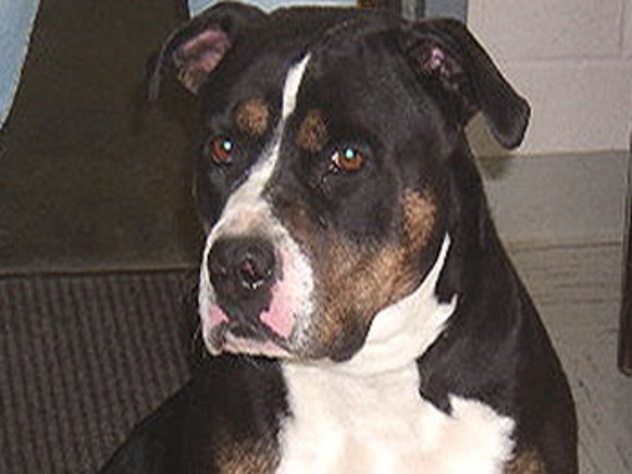 Also known as the Brindisi Wrestler Dog, the Lottatore Brindisino is a recently created dog breed. It was created in Brindisi, Italy, by crossbreeding Pit Bulls with Cane Corsos and Rottweilers. It is believed that the parent dogs used for the stock are hardened canines that had won dogfights. However, the breed has not yet been standardized, and different breeders are creating their own versions.

In Italy, it is mostly used by the local Brindisi mafia for dog fighting, though it is sometimes used to guard properties. The Lottatore Brindisino is very violent and difficult to control. While it can be friendly to its owner, the same cannot be said of its relationship with other humans and dogs.[9] 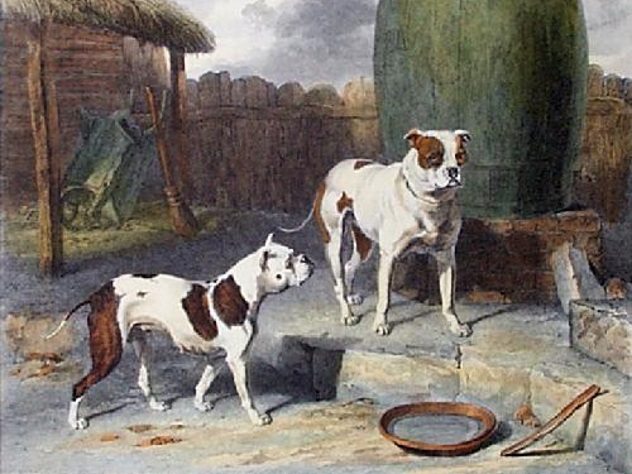 The Old English Bulldog was bred for bullbaiting. In fact, it was named “bulldog” for this very reason. In the sport of bullbaiting, several bulldogs were unleashed upon a tethered bull. Any dog that grabbed the bull by the nose and pinned it to the ground was the winner. Bullfights were really bloody, and it was normal for the bull to kill or seriously injure the dogs.

The Old English Bulldog almost went extinct when bullbaiting was outlawed in England in 1835. However, some were sent to the United States, where they were used to capture wild bulls. The dogs would hold the bulls by the nose until someone arrived to put a rope round the bull’s neck. The Old English Bulldog was later crossbred with the pug to create the Olde English Bullogge. Unlike its predecessor, the Olde English Bullogge has a smaller mouth and stature and cannot cope with the rigors of being thrown around by a bull.[10]

Read about some human blood sports on Top 10 Types Of Roman Gladiators and 10 Extreme Sports From History.