Paradoxes can be found everywhere, from ecology to geometry and from logic to chemistry. Even the machine you’re using to read this list has paradoxes of its own. Here are 10 explanations of some of the lesser-known (yet still fascinating) paradoxes of the world. Some concepts are so counterintuitive that we just can’t wrap our minds around them.

Imagine that you are holding a ball. Now picture tearing this ball apart into bits—tear it to pieces, giving the pieces any shape you like. After that, put the pieces back together to form two balls instead of one. How big are these balls in comparison to the one you started with?

Set theoretic geometry would conclude that the matter of the original ball can be separated into two balls of the exact same size and shape as the original ball. Additionally, given two balls of different volume, either ball may be reformed to match the other. This gives way to the cheeky conclusion that a pea may be divided and reshaped into a ball the size of the Sun.

The trick in this paradox is the caveat that you can tear the ball into pieces of any shape. In practice, you cannot really do this—you are limited by the material’s structure and ultimately by the size of atoms. To be able to truly tear the ball however you like, the ball would have to contain an infinite number of accessible zero-dimensional points. The ball would be infinitely dense with these points, and once you separate them, the shapes could be so complex that each would have no defined volume. You could rearrange these shapes, each containing infinite points, into a ball of any size. The new ball would still contain infinite points, and both balls would be equally—infinitely—dense.

Though this idea does not work when you try it on physical balls, it does when you work with mathematical spheres, which are infinitely divisible sets of numbers in three dimensions. The resolution of the paradox, called the Banach-Tarksi theorem, is therefore important to mathematical set theory. 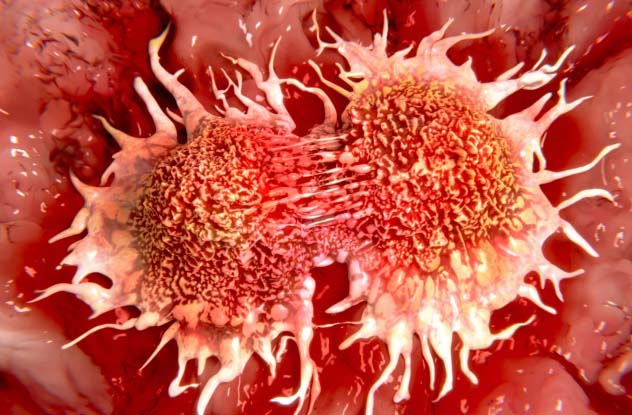 Whales are obviously much larger than we are. This means that they also have far more cells in their bodies. Every cell in the body has the potential to become cancerous. Therefore whales have a higher chance of contracting cancer than we do, right?

Wrong. Peto’s paradox, named after Oxford professor Richard Peto, states that the expected correlation between animal size and cancer prevalence is nonexistent. Humans and beluga whales share a relatively similar chance of getting cancer, while certain breeds of tiny mice have a much higher chance.

Some biologists believe that the lack of correlation in Peto’s paradox comes from tumor-suppressing mechanisms in larger animals. These suppressors work to prevent cell mutation during division.

8The Problem Of The Species Present 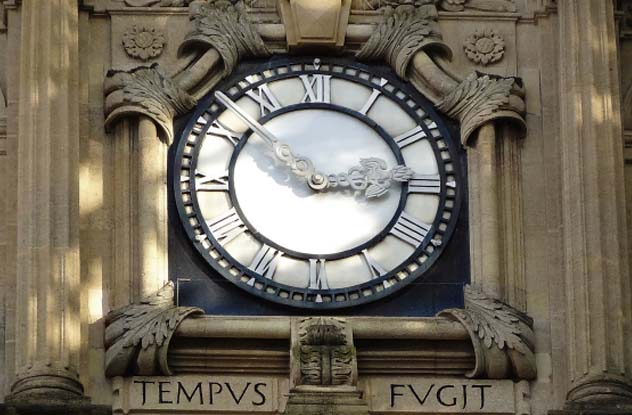 For something to physically exist, it must be present for a duration of time. Just as an object cannot lack length, width, or depth, it needs duration—an “instantaneous” object, one that doesn’t last for any amount of time, does not exist at all.

Therefore, the present can never truly exist as it never occupies a set duration of time. Universal nihilism uses this argument to claim that nothing ever exists. 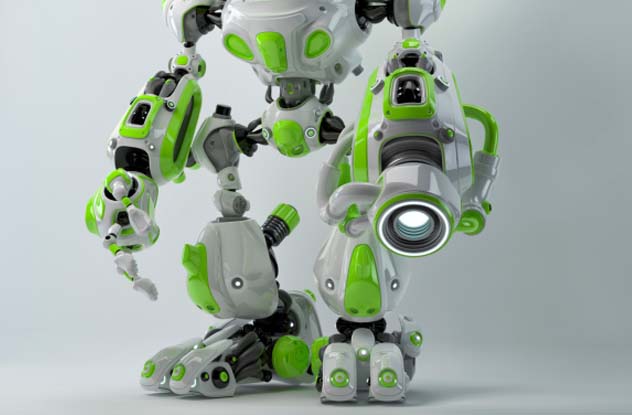 People have trouble solving problems that require high-level reasoning. On the other hand, basic motor and sensory functions such as walking are no trouble at all. In computers, however, the roles are reversed. It is very easy for computers to process logical problems, such as devising chess strategies, but it takes a lot more work to program a computer to walk or accurately interpret speech. This difference between natural and artificial intelligence is known as Moravec’s Paradox.

Hans Moravec, a research scientist at the Carnegie Mellon University Robotics Institute, explains this observation through the idea of reverse engineering our own brains. Reverse engineering is most difficult for tasks that humans do unconsciously, such as motor functions. Because abstract thought has been a part of human behavior for less than 100,000 years, our ability to solve abstract problems is a conscious one. Therefore, it is much easier for us to create technology that emulates such behavior. On the flip side, actions such as speaking and moving are not ones that we need to actively consider, so it is harder to put these functions into agents of artificial intelligence.

What’s the chance that a random number starts with the digit “1”? Or with the digit “3” or “7”? If you know a little about probability, you would assume that the probability in each case would be one in nine, or about 11 percent.

And yet, if you look at real-world figures, “9” shows up far less than 11 percent of the time. Fewer numbers than expected also start with “8,” while a whopping 30 percent of numbers start with the digit “1.” This paradoxical pattern shows up in all sorts of real measurements, from populations to stock prices to the lengths of rivers.

Benford’s Law does not apply to every distribution of numbers. For example, sets of numbers that are limited in range, such as human height and weight measurements, do not follow the law. It also does not work with sets that have only one or two orders of magnitude. However, it does apply to many types of data, greatly conflicting with what people would expect. As a result, authorities can use the law to detect fraud. When submitted data does not follow the law, authorities can conclude that someone fabricated the data instead of accurately collecting it. 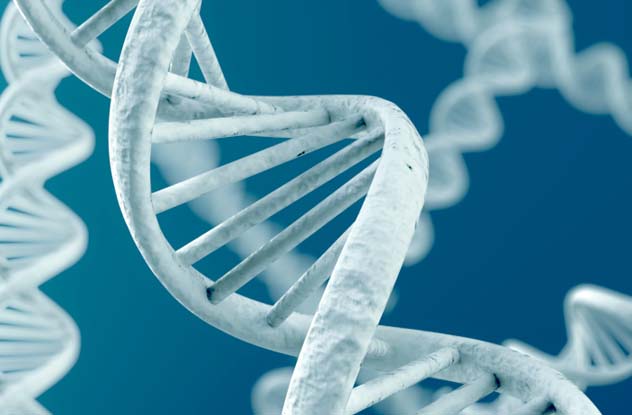 Genes contain all the information necessary for creating an organism. So it stands to reason that complex organisms would have the most complex genomes—and yet that’s not true at all.

Single-celled amoeba have genomes that are 100 times larger than those of humans. In fact, they have some of the largest genomes that have been observed. Furthermore, species that are very similar to each other can have radically different genomes. This oddity is known as the C-value paradox.

An interesting takeaway from the C-value paradox is that genomes can be larger than necessary. If all of the genomic DNA in humans were in use, the amount of mutations per generation would be incredibly high. The genomes of many complex animals, such as humans and primates, includes DNA that encodes nothing. This huge amount of unused DNA, which varies greatly in quantity from creature to creature, accounts for the lack of correlation that creates the C-value paradox.

4An Immortal Ant On A Rope 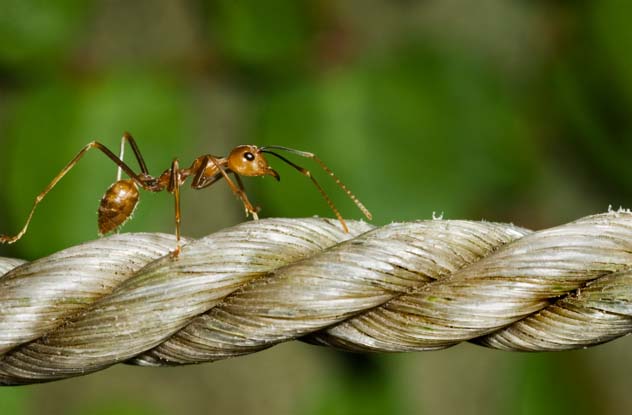 Imagine an ant walking the length of a 1-meter (3.3 ft) rubber rope at the rate of 1 centimeter (0.4 in) per second. Imagine that the rope is also being stretched at 1 kilometer (0.62 mi) per second. Will the ant ever make it to the end of the elongating rope?

Logically, it seems impossible for the ant to do so because its rate of motion is far lower than that of its destination. However, the ant will indeed eventually make it to the other side.

Before the ant begins moving, it has 100 percent of the rope left to traverse. After one second, the rope has become considerably longer, but the ant has also moved, decreasing the fraction of rope remaining. Though the distance in front of the ant increases, the small bit of rope that the ant has already covered elongates as well. So though the overall rope lengthens at a steady rate, the distance in front of the ant increases by slightly less each second. The ant, meanwhile, moves forward at a completely steady rate. In this way, with each passing second, the ant chips away at the percentage he still has to cover.

There is one condition needed for this paradox to have a resolution: The ant must be immortal. For the ant to ever make it to the end, it would have to walk for 2.8 x 1043,429 seconds, which exceeds the lifetime of the universe.

3The Paradox Of Enrichment 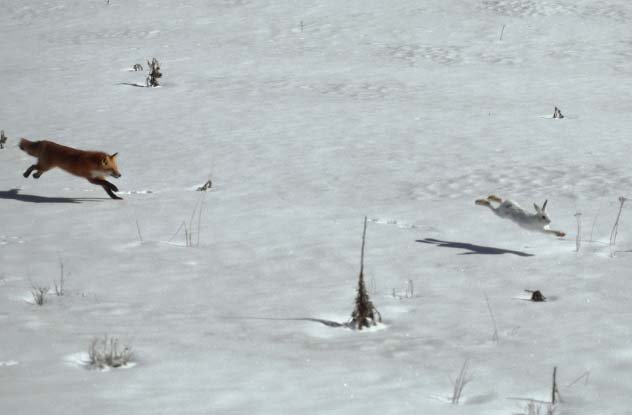 Predator-prey models are equations that describe real-world ecological environments. For example, a model may measure how the populations of foxes and rabbits change in a large forest. Suppose the abundance of lettuce increases permanently in the forest. You would expect this to have a good effect on the rabbits that eat lettuce, boosting their population.

The paradox of enrichment states that this may not be the case. The rabbit population rises initially. But the increased density of rabbits in the closed environment leads to an increase in the population of foxes. Rather than finding a new equilibrium, the predators may grow so much in number that they decimate or even wipe out the prey—and thus wipe themselves out as well.

In practice, species may develop means to escape the fate of the paradox, leading to stable populations. For example, the new conditions may induce new defense mechanisms in the prey.

Round up a group of friends, and watch the above video. When it’s over, have everyone say whether the pitch increased or decreased during each of the four pairs of tones. You may be surprised to find that your friends disagree on the answer.

To understand this paradox, you need to know a little about musical notes. A specific note has a specific pitch, which is how high or low it sounds. A note that is one octave above a second note sounds twice as high because its wave has twice the frequency. Each octave interval can be divided into two equal tritone intervals.

In the video, a tritone separates each pair’s sounds. In each pair, one sound is a mixture of identical notes from different octaves—for example, a combination of two “D” notes, one higher than the other. When the sound is played next to a second note one tritone away (for example, a G-sharp between the two D’s), you may validly interpret the second note as either higher or lower than the first.

Another paradoxical application of tritones is an infinite sound that appears to constantly drop in pitch, though it actually cycles continually. This video plays such a sound for 10 hours. 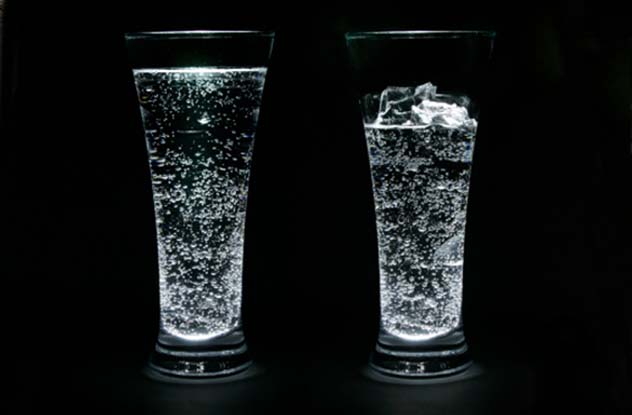 Sitting in front of you are two glasses of water that are identical except for one thing: The water on your left is hotter than the water on your right. Place both of these glasses in the freezer. Which will freeze faster? You’d think the colder glass on the right would, but that might not be the case. Hot water can freeze faster than cold water.

This odd effect is named after a Tanzanian student who observed it in 1986 while freezing milk to make ice cream. But some of history’s greatest thinkers—Aristotle, Francis Bacon, and Rene Descartes—had previously noted this phenomenon without being able to explain it. Aristotle mistakenly attributed it to what he called “antiperistasis,” the idea that a quality intensifies in the environment of its opposite quality.

Several factors contribute to the Mpemba Effect. The hot glass of water may lose a large amount of water from evaporation, leaving less water that needs to be cooled. Warmer water also holds less dissolved gas, which could cause the water to more easily develop convection currents, thereby making it easier for the water to freeze.

Another theory lies in the chemical bonds holding the water molecule together. A molecule of water has two hydrogen atoms bonded to a single oxygen atom. When water heats up, the molecules move apart, and the bonds can relax and give up some of their energy. This lets them cool faster than water that had not been heated to begin with.

Alex Brannan is a student at the University of Wisconsin-Madison and an aspiring fiction writer.