Bruce Lee was more than just a martial artist, movie star, and cultural icon. He was a tireless superman who overcame every handicap life gave him to become successful in whatever field he put his mind to. Also, he made awesome movies and was the world’s first international Chinese superstar, overcoming barriers of race and nationality. Here are just a few facts and stories about this remarkable man that may surprise you.

10Bruce Was Sent To America To Stop His Street Fighting 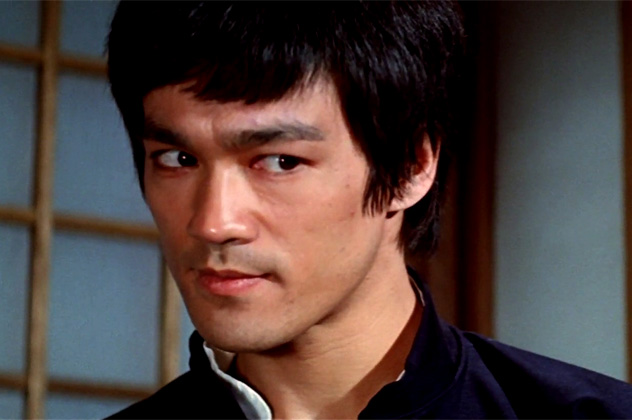 Just like a superhero, Bruce Lee has an origin story. Lee grew up on the streets of Hong Kong in the ’50s. At this time, British-owned Hong Kong was flooded with people trying to escape the repressive communist Chinese government, leading to overcrowding. This meant that Hong Kong was overrun with homelessness, poverty, and crime. As a child, Lee was in a gang called The Tigers Of Junction Street. Unfortunately, The Tigers Of Junction Street weren’t a very good gang and ended up getting beaten up pretty badly more than a few times. One day, 13-year-old Bruce arrived home with a black eye and asked for karate lessons. His mother said yes, and Bruce ended up with a mentor, the semi-legendary kung fu teacher called Yip Man.

Most of what Bruce learned from Yip Man would be utilized in street fights. Lee carried knives and chains with him and would often challenge or straight up attack other gangs. Lee was fearless at this age, once attacking and beating up the son of a known Triad member. Eventually, his parents decided that he would be better off out of the country and had to bribe the police to have him taken off a list of known troublemakers so that he could travel to America.

Before leaving Hong Kong, Bruce had picked up a skill. Besides being one of the greatest martial artists who ever lived, Bruce was also talented in another, perhaps more surprising field—cha-cha dancing. Apparently, Bruce took up the hobby a year after he started taking serious kung fu lessons. At first, cha-cha dancing was just a way to impress a girl, but he soon became pretty good at it. He also found that practicing dancing could improve his footwork and balance and soon invested his crazy focus in dancing as well as kung fu—it’s said that Bruce always carried a card containing more than 100 individual dance steps that he could flip through.

At 18, he was so good at dancing that he won a competition to become the cha-cha champion of Hong Kong. To further illustrate how just how good he was, when Bruce was traveling to America with only $100 in his pocket, he made extra cash by teaching some of the wealthy American passengers how to dance. 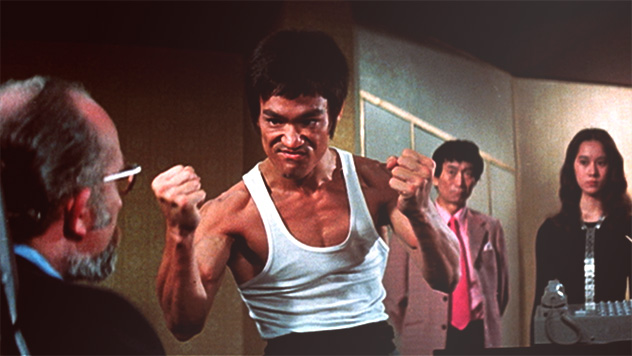 In 1964, Bruce began teaching martial arts in California. Up until this point, kung fu had been a closely guarded secret taught only to Chinese. Bruce, however, thought that this was pointless. Bruce believed that all knowledge should be shared and that if people were going to hurt each other, they didn’t need kung fu to do so. For these reasons, Bruce took on Caucasian and black students. There was a backlash in the Chinese community, and several men arrived at Bruce’s dojo during training and presented him with an ornate scroll. The scroll explained that the man holding it, Wong Jack Man, was there on behalf of the Chinese community to challenge Bruce to a fight. If Bruce lost, he was no longer allowed to teach non-Chinese how to fight.

The whole event was a bluff intended to scare Bruce off. But Bruce Lee was not someone who could be easily intimidated, so Bruce, by this point pretty angry, agreed to fight Wong Jack Man. There’s no video of the event, but there were several reliable witnesses who claim that it lasted no longer than a few minutes. Eventually, Wong Jack Man realized that he couldn’t possibly beat Lee and tried to run away. Lee chased after him and pounded him until he gave up. No other challengers were ever sent to Lee’s dojo and Lee continued to share kung fu with people of every race.

Of course, Wong’s account of the fight differs dramatically. According to him, Lee responded to a handshake with a sucker punch and spent the rest of the fight trying to blind him with finger jabs. He also said that the fight ended in something closer to a draw. We’ll probably never know exactly what happened that day.

7He Walked Away From A Deadly Spinal Injury 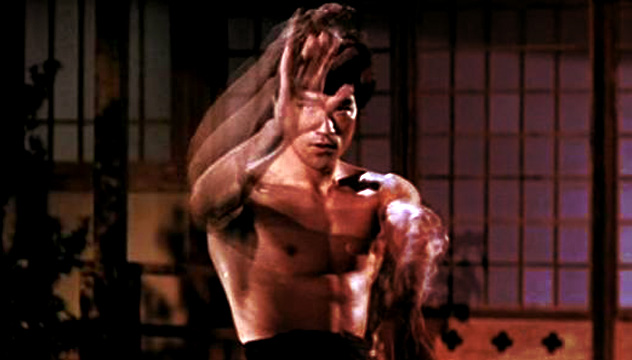 In 1970, Bruce Lee suffered what would have been a career-ending injury for most athletes. Lee’s workout routines were very difficult and dangerous even if performed correctly, and even though Lee usually took every precaution when working out, one day he chose not to warm up before performing a “good morning” exercise. The “good morning” consisted of Bruce placing a barbell that weighed over 45 kilos (100 lb) on his shoulders and bending over until he was parallel with the ground.

Something went wrong and Lee was soon admitted to hospital with crippling back pain. He was told that he had damaged the fourth sacral nerve in his spine. His doctor then told him that he’d never practice kung fu again, at least not at the same level. The most he could hope for, they said, was to lead “a normal life.” Lee spent the next six months trying to prove them wrong, developing his own philosophy and teaching himself to walk again. Eventually, he walked out of the hospital and managed to become faster and stronger than he had been before the injury.

Bruce Lee managed to get a few roles in American TV shows and films, including The Green Hornet, but he struggled with his acting career due to racism. Most TV executives and producers were not willing to take the risk of casting an Asian man in a lead role. Despite this, Lee still attracted major attention from famous people who were willing to look past his skin color. Among his famous students were celebrities such as Steve McQueen, Joe Lewis, Chuck Norris, James Coburn, and Kareem Abdul-Jabbar.

Bruce tried to politely discourage celebrities by raising his hourly rate to $250 because he didn’t want to give the impression that kung fu could be mastered by a few simple lessons. But the higher he put the prices, the faster they came. Bruce was once even flown to Switzerland to give private lessons to Roman Polanski.

5He Once (Accidentally) Beat Up Jackie Chan

BEST STORY EVER: Jackie Chan Picks A Fight With Bruce Lee… And Loses

Jackie Chan started out as a young extra in a few Bruce Lee movies. One of his first appearances was in Fist Of Fury, where he fell from a building so high that he broke the record for the highest fall in Chinese cinema. In the same movie, he was kicked through a wall. The point is, Jackie Chan can’t be killed or hurt by conventional means.

While playing a henchman in Enter The Dragon, he attacked Bruce from behind and was accidentally smashed in the face with a bo staff. In the above video (at 0:24, if you’re impatient), you can see the moment Jackie gets whacked pretty hard. Luckily, Jackie Chan is not made of the same flesh as us mortals and survived with only minor injuries. He laughed the incident off and just enjoyed the opportunity to meet and hug his idol.

During the ’70s, Bruce Lee was struggling to find roles, so he tried pitching his own idea to TV studios. His proposed show was about a Chinese martial artist wandering the Old West and using kung fu to right wrongs. Unfortunately, the producers he talked to were skeptical because they thought that the show wouldn’t work if the main star was “too Chinese.” His idea was eventually turned down . . . and then a few years later, Kung Fu happened.

Bruce Lee’s name is not in the credits for Kung Fu, nor did he receive a paycheck. According to the show’s producers and creators—and Warner Brothers itself—Kung Fu was not based on Lee’s ideas or pitch. And we suppose it could just be a giant coincidence that the same studio to which Lee had been pitching his idea of a Chinese kung fu artist wandering the Old West righting wrongs just so happened to air a completely unrelated show about a Chinese martial artist wandering the old West righting wrongs.

3He Was Too Fast For Cameras

It’s hard to write about Bruce Lee without insinuating that he was some kind of machine sent back from the future. That goes double when you get to the fact that he often performed feats that shouldn’t be possible, like punching faster than the eye can see. Lee was cast as Kato in The Green Hornet in 1966, but once they began filming, the show’s cameraman learned that Bruce’s kicks and punches were actually too fast to be seen on camera. The problem was eventually solved by simply asking Lee to punch and kick slower.

But just how fast was Bruce Lee? Above is a video showing Lee in clips from several of his movies. When slowed down you can see just how fast his punches and kicks were, as well as several movements he makes which were too fast to show up on screen at normal speed. (A particularly good example can be seen at 1:40.)

2He Was Tougher Than Chuck Norris

According to the internet, Chuck Norris is unstoppable and terrifying. So who would win in a fight between Lee and Norris? Well, Chuck Norris was a friend of Bruce Lee and talks about him in many interviews where that same question often arises. Usually, Norris is somewhat evasive, turning philosophical and refusing to outwardly answer the question. In the past, he’s responded with such gems as, “Would I have beaten Bruce Lee in a real competition, or not? You’ll forgive me for answering with another Bruceism: ‘Showing off is the fool’s idea of glory.’ ”

However, one time (and only once) while providing DVD commentary for Enter The Dragon, he actually definitively answered the question . . . and it’s affirmative, even Chuck Norris has admitted that Bruce Lee could take him in a fight. Unfortunately, the closest we’ll get to seeing it is when the two faced off in Way Of The Dragon.

In 1973, Bruce Lee passed away, having only starred (as a lead) in five films. But surprisingly, Lee’s tragic and untimely death actually created a new genre of kung fu movie: the Bruce-ploitation genre. These knockoffs ended up totaling a mammoth 168 movies. Basically, Bruce was so popular at this point that filmmakers realized that pretty much anything with his name or likeness on it would sell. So the cashing in began.

To kick it off, Bruce’s last, unfinished film, Game Of Death, was completed through a combination of splicing together old footage and the use of several lookalikes. In trying to stretch the film to feature length, the filmmakers even shamelessly used footage from Bruce Lee’s actual funeral—including shots of his corpse. This was something that would continue for years, with a whole rake of Bruce Lee lookalikes with names like Bruce Li and Lee Bruce appearing in a host of bad films with terrible dubbing and titles that were just remixes of older Bruce Lee films. If you’re curious how bad movies of the Bruce-ploitation genre were, watch the above trailer for Enter the Game of Death.

Aaron is a film student and freelance writer. You can talk to him on Twitter.