Flowers are nature’s way of tricking insects into helping plants have sex, and as a side effect, humans have something to make their gardens look prettier. There are about 350,000 species of flowering plant, and most of them are innocent souls. But a heaping handful of them are vicious killers with zero remorse. 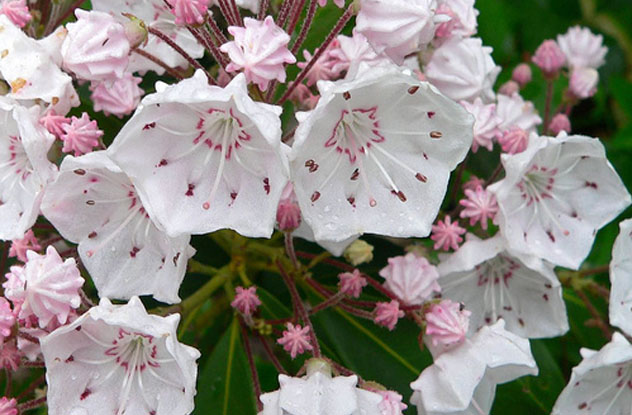 Kalmia latifolia, more commonly known as mountain laurel, produces delicate pink and white flowers in the late spring. It’s the state flower of both Pennsylvania and Connecticut, and it grows just about everywhere in the eastern United States. It’s gorgeous, but underneath that dainty exterior beats the heart of a murderer.

The two main toxins in Kalmia latifolia are andromedotoxin and arbutin, but it’s the first one that you need to worry about. Andromedotoxin simultaneously causes part of the heart to beat quickly and part to beat dangerously slowly. In healthy people, the heart has a natural gate that blocks half of the electrical pulses coming to the organ. The toxin induces Wolff-Parkinson-White (WPW) syndrome, which disrupts that gate, letting all the pulses reach your heart. The result? Sudden cardiac death.

But that only happens with large doses. In smaller doses, you can expect to start with a lot of vomiting, after which every hole in your head will leak its fluids down your face. About an hour later, your breathing will slow down, you’ll lose the ability to use your muscles, and you’ll slip into a coma and die.

The terrifying part is that you don’t have to eat the flowers—honey from bees that have visited Kalmia latifolia contains all the toxic properties of the flower itself. The Greeks called it “mad honey,” and they used it to defeat Xenophon of Athens in 400 B.C. 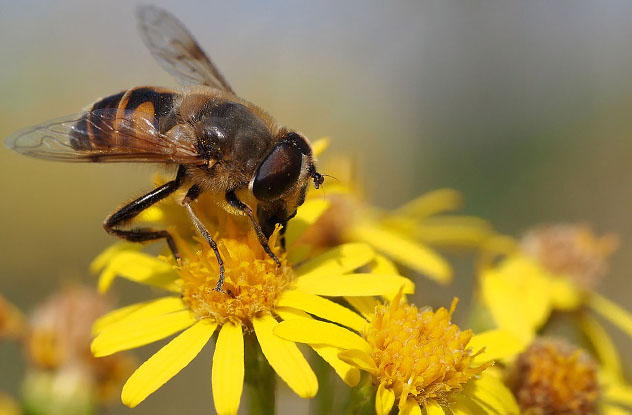 Ragwort, a common wildflower in the UK, is an important part of the local ecosystem. Almost 80 insects get food from the plant, and at least 30 of those feed on ragwort exclusively. Because of that, the flowers hold particular interest for conservation societies. That’s good news for the bugs but bad news for everybody else. The World Health Organization has confirmed the presence of at least eight toxic alkaloids in ragwort, and it may have at least 10 more on top of that.

The problem is that unlike most poisons, which quickly leave the system, the alkaloids in ragwort build up in the liver over time. The accumulating toxins result in liver cirrhosis, a condition in which the liver slowly folds in on itself as healthy cells degenerate into an unresponsive mass of scar tissue. The liver’s a resilient organ and will continue operating like normal until up to 75 percent of it’s been destroyed, but by the time symptoms start appearing, the damage is irreversible.

Symptoms include loss of coordination, blindness, stabbing abdominal pains, and yellow eyes from bile pigment that fills the eye’s surface membrane. Unfortunately, this is another toxin that makes its way into honey, as well as into milk from goats who eat ragwort. As a final slap on the face, when farmers try to remove ragwort from their fields, the toxins can seep right into the skin of their hands. 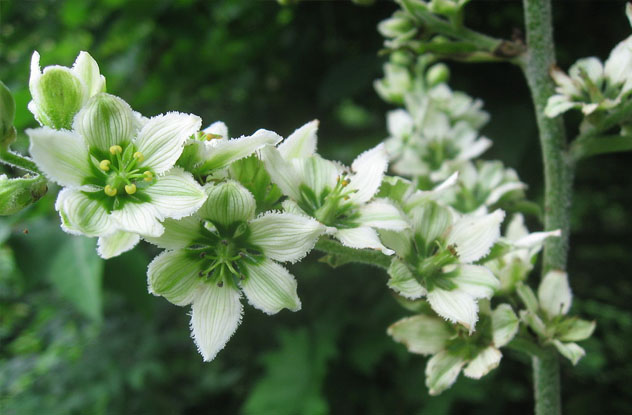 Found on nearly every mountain in the Northern Hemisphere, Veratrum species put out gorgeous spiral clusters of white, heart-shaped flowers. The plant is commonly grown for ornamental purposes because even the leaves look pretty, and in the wild, it’s commonly confused with garlic. But pretty or not, every piece of this plant, from the roots to the pistils, is lethally toxic.

The first symptom of Veratrum poisoning is violent stomach cramping, which usually starts about 30 minutes after ingestion. As the toxins absorb into the bloodstream, they make a beeline for the sodium ion channels. Sodium ion channels act like gates to allow sodium to flow through nerves, triggering an action. For example, the opening of sodium ion channels in muscle cells starts the process that leads to a muscle contraction.

When Veratrum toxins hit the sodium ion channels, they open the floodgates, forcing the channels to fire continuously. The body doesn’t know what to do with this, so the heart begins to alternately slow and speed up. Muscles all over the body convulse. Eventually, the toxin either causes a heart attack or a coma. It’s believed that this is the poison that killed Alexander the Great. 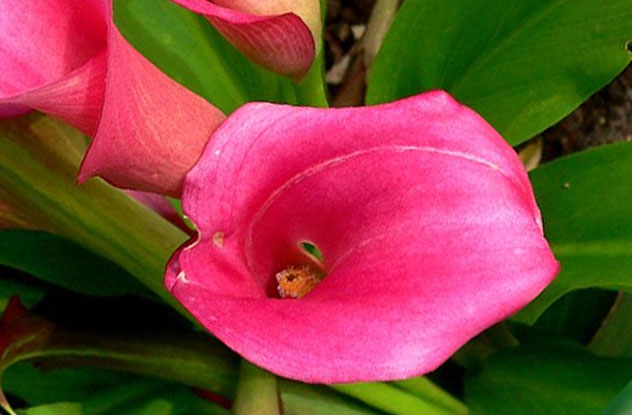 The gorgeous perennial Zantedeschia has been introduced to every continent but Antarctica and is a staple in ornamental gardens. It’s often called a calla lily, even though it’s not even remotely related to lilies and doesn’t look anything like one. The bright, tube-shaped flowers can be a variety of colors.

Zantedeschia species contain calcium oxalate, a chemical that forms needle-like crystals inside internal organs. More than 1,000 types of plants contain calcium oxalate, and Zantedeschia is one of the most dangerous, partly because it’s so widespread. Even a tiny dose of the chemical is enough to cause a person’s throat to swell, usually along with an intense burning feeling.

The more you eat, the worse the symptoms become, until your throat swells so large it squeezes your airways shut. In one incident, a Chinese restaurant accidentally put the flower petals from a toxic plant into their food, putting everyone who ate it in the hospital. 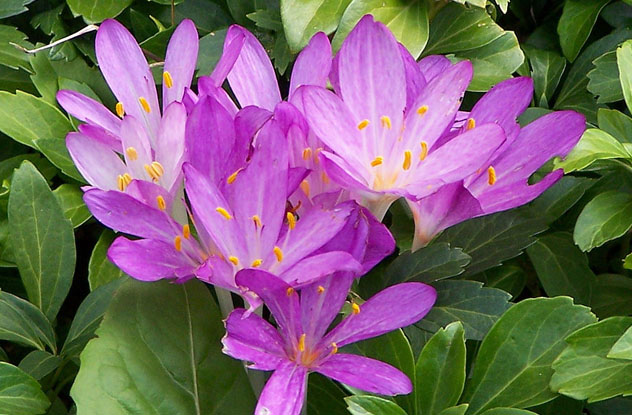 Colchicum autumnale is native to the UK, but it can now be found across most of Europe and New Zealand. One of its common names is “naked lady,” which is a deceptively sexy name for a cold-blooded killer. The only known antidote for Colchicum poisoning is a slow, painful death.

The chemical at work here is colchicine, a poison that kills with methods similar to arsenic, systematically shutting down of all of your body’s vital functions. Mass organ failure, blood clots, and nerve disruptions are just a few of the horrifying symptoms of Colchicum poisoning. Every few days, a new set of symptoms appears as yet another internal system goes belly up.

Death can take anywhere from days to weeks, but when you eat enough, it’s always fatal. And for whatever reason, the flower leaves you conscious to the bitter end, forcing you to live through each excruciating moment. People have compared death from Colchicum to cholera. 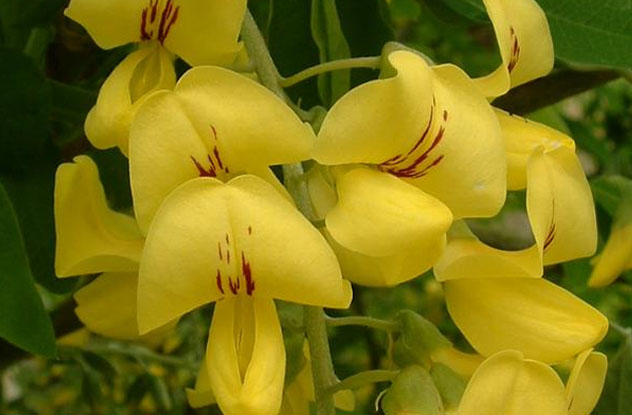 Everybody’s brain is hardwired to accept nicotine through receptors the same shape as nicotine molecules. Despite their name, nicotinic receptors can also bond with other chemicals. One such chemical is cytisine.

In low doses, cytisine isn’t terribly harmful. As a drug, it sometimes helps people quit smoking because of its ability to bond to nicotinic receptors. But in large doses, it’s positively lethal.

Laburnum poisonings have been recorded for centuries and usually involve children who eat either the flowers or the seed casings, which look like pea pods. The cytisine, which is present in every single part of the tree, starts working in minutes. Poisoning starts with intense vomiting followed by streams of foam pouring out of the mouth. After about an hour, the convulsions start.

Normally, convulsions occur intermittently, like ocean waves. But with cytisine poisoning, the convulsing waves are so close together that your muscles permanently contract, which is called a tetanic contraction. It all culminates in a deep coma and death. Fortunately, people don’t usually die from Laburnum poisoning these days as long as they get to the hospital in time. 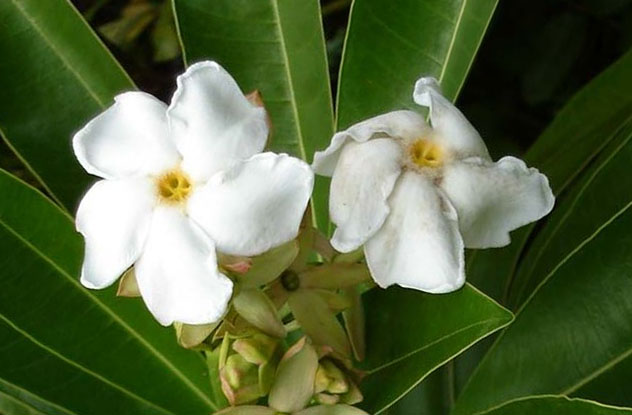 Cerbera odollam probably has the most accurate alternate name in the entire plant kingdom: To Indian locals, it’s known as the “suicide tree.” And its reach goes far beyond suicide—according to a team of researchers who investigated a number of deaths in the southwest region of India, Cerbera odollam is the perfect murder weapon. In a 10-year period, at least 500 deaths were confirmed to be the work of the flower-bearing tree, which kills through a potent glycoside called cerberin.

Cerberin starts working within an hour. After some light stomach pain, you slip into a quiet coma, and your heart politely stops beating. The entire process takes place in about three hours. The chemical is untraceable after the fact, which is why it’s commonly used as a discreet murder weapon. A research team in India believes that up to twice as many people died from Cerbera odollam as they discovered—most likely homicide victims in cases where nobody thought to suspect foul play. 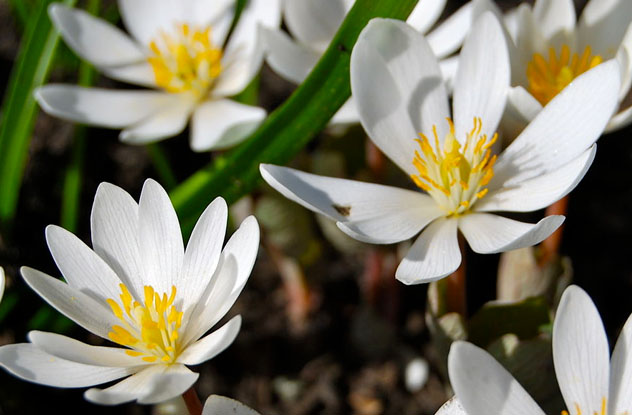 Commonly known as bloodroot, Sanguinaria grows wild in eastern North America. Native Americans used the blood-red roots as an ornamental dye, but they also used it to induce abortions. Enough of it will put you in a coma.

People more recently have taken to using it as a home remedy for skin cancer, with horrible results. Bloodroot contains a chemical called sanguarine, which, in addition to being a dangerous toxin, is an escharotic substance. Escharotics kill tissue and slough it off as a creamy pulp, leaving behind a dark black scar called an eschar. In other words, putting bloodroot on your skin causes your skin cells to kill themselves.

The same thing happens internally. The chemical disrupts an enzyme called Na+/K+-ATPase, which does the important job of pumping sodium out of cells and pumping potassium in. When that doesn’t happen, all functions break down. 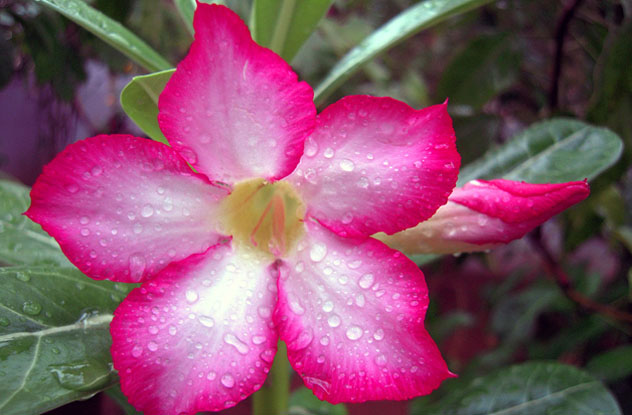 Native to Africa, Adenium obesum has been used as a spear poison by tribes for centuries. The desert rose, as the preparation is called, is made by boiling the plant for 12 hours before removing all the plant matter and letting the liquid evaporate. The resulting goo is a highly concentrated poison. It’s so toxic that just a bit of the poison from a spears or arrows brings down large game before they can run 2 kilometers (1.2 mi), so hunters can stay on their trail while they gradually bite the dust.

This specific plant has been used by tribes all over Africa to kill animals as large as elephants, and now that we’ve studied it, we know why. The plant contains a chemical called ouabain, which causes almost immediate respiratory failure at high doses.

Another flower in the Apocynaceae family grows in the same region, and hunters often use it in conjunction with Adenium. It also contains ouabain, and it turns out that humans aren’t the only African natives using its killing power—the African crested rat will chew the flower’s bark and lick his hair with the toxins, turning itself into a scurrying ball of unexpected death. 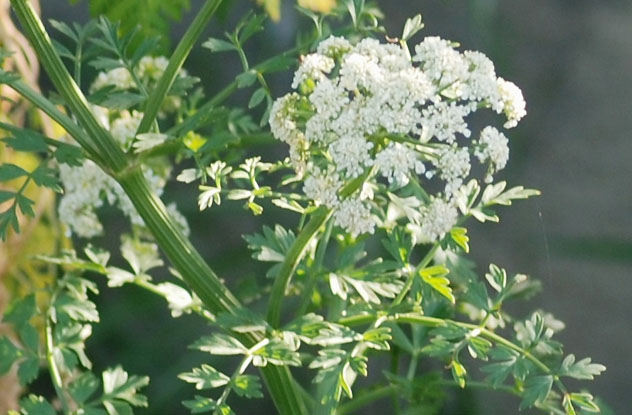 In 2002, eight tourists in Argyll, Scotland decided to forage some choice water parsnips from a nearby stream. Prize in hand, they returned home and put them in a curry dish. The next day, four of them were in the hospital. What they’d thought was water parsnip was actually Oenanthe crocata, or hemlock water dropwort. The plant has mortality rate of up to 70 percent, so the group was lucky nobody died.

Hemlock water dropwort has an interesting property. It’s lethal, sure. But the killer toxin, oenanthotoxin, relaxes the muscles around your lips and forces you to smile, even when you’re in the throes of fatal convulsions. The plant has been used in Greece since at least the eighth century B.C., when Homer coined the term “sardonic grin” to describe the grisly smile adorning the faces of water dropwort victims.