The deep sea is famous for such bizarre wildlife as giant isopods, luminescent anglerfish, and gigantic squid, but there are many oddities of the depths that don’t get as much press.

Round animal with car headlamps for eyes – Giant Ostracod

Ostracods, also called “seed shrimp” or “clam shrimp,” are found all over the world, even appearing in small puddles of rainwater. They are seldom larger than a grain of sand, which is why their abyssal cousin was dubbed Gigantocypris even though it only grows about as large as a marble or a grape. Like all seed shrimp, its delicate, multi-legged body is encased almost entirely in a transparent, bubble-like outer shell with a tiny slot for the intake of water and food.

The most unusual feature of these deep-sea pebbles are their proportionally enormous eyes. Rather than having lenses, their eyes are concave mirrors, which are bad at constructing images but incredibly effective at picking up light. This explains why these creatures constantly rotate as they swim, their shining eyes scanning their surroundings like a pair of sonar dishes. Believed to be strictly predatory, they pick up on the luminescence of smaller crustaceans or even tiny fish, pulling them inside their shell to be consumed. Little is known about their reproductive habits, but their eggs are often clearly visible inside their shells.

Read the bestselling thriller Sea Creatures on your Kindle at Amazon.com! 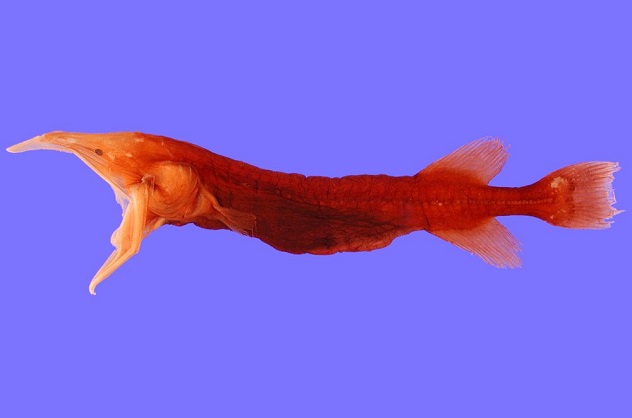 For many years, a group of gluttonous deep-sea predators called “whalefish” were known only from female specimens and classified as Cetomimidae, literally meaning “whale mimic.” For almost as long, another group of fish called Megalomycteridae, or “bignoses,” were only ever found to be male. Mysteriously, they seemed to lack complete digestive tracts, implying a very short lifespan in which to find for a mate. Finally, a third variety of fish, nicknamed “tapetails,” seemed to all be juveniles, characterized by incredibly long, delicate tails and often living closer to the sea’s surface.

If you haven’t guessed already, we now know that these three totally different creatures are all the same exact animal. As tapetails mature and descend into the abyss, they develop into either “whale-mouthed” females, which prey on other fish with their pelican-like gullets, or “big-nosed” males, which barely eat at all and exist only to live long enough to mate. 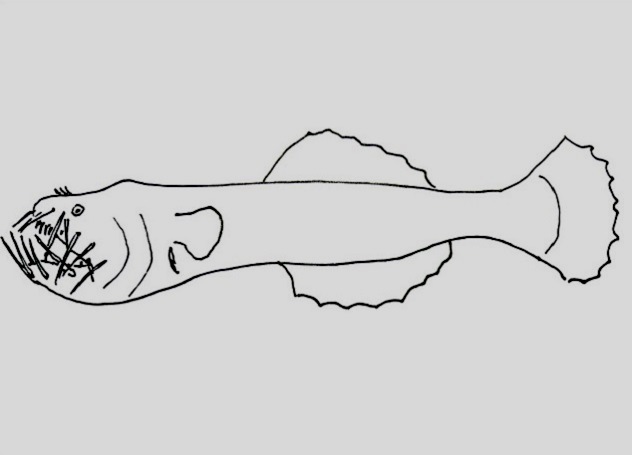 Also referred to as a “needlebeard” or “netbeard” seadevil, the 13-centimeter (5 in) female of this unusual anglerfish species doesn’t possess the organic “fishing lure” of other members of its genus. Instead, she has a sleeker, more elongated form to facilitate more active hunting and a set of teeth that are creepy even by anglerfish standards. Dozens of them sprout from odd angles inside and even outside her mouth, crisscrossing each other like sutures. Each tooth ends in a tiny hook and can be moved independently from the rest, presumably to entangle prey and push them down the tiny monster’s esophagus.

Scientists haven’t yet determined what species end up in these horrifying fangs. No feeding behavior has been observed, and specimens are too rare to learn much from their stomach contents. Like many anglerfish, the male toothed seadevil uses his large sinus cavities to locate a female by scent before attaching himself to her skin with his teeth. He remains there for the rest of his life, nourished by her blood as their skin fuses together and most of his body atrophies.

Tunicates, or “sea squirts,” are normally almost motionless, bag-like filter-feeding animals. In the deep ocean, however, plankton can be harder to find, so many abyssal animals must depend on slightly larger food sources. The carnivorous deep-sea tunicate, Megalodicopia hians, has evolved a huge, gaping mouth to trap small crustaceans lulled into a false sense of security by its transparent body like an underwater Venus fly trap. In 2009, another species of meat-eating sea squirt—this one with a tubular, horizontal mouth—was found off the coast of Tasmania.

Perhaps the strangest thing about these animals is how closely related they are to us. Tunicates are chordates, which means that they begin embryonic development with much of the same anatomy as us vertebrates. One such feature we start out sharing is the notochord, which develops into the spine for those of us who have internal skeletons. As a tunicate matures, it simply absorbs the notochord along with its brain as it settles down for a mindless life of stationary feeding. 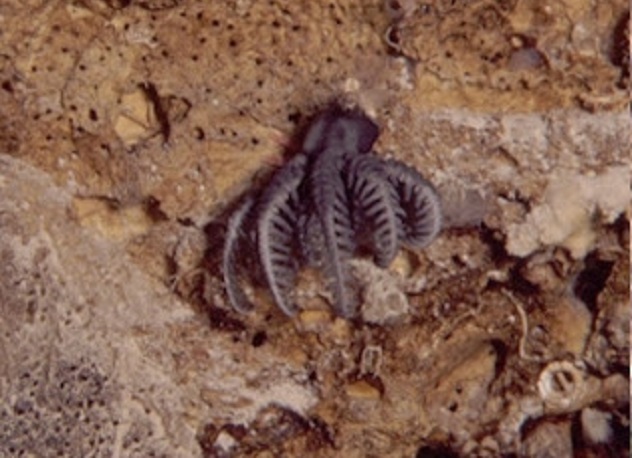 Crinoids, or “sea lilies,” are related to starfish and sea cucumbers and were once among the most abundant of all sea life. The relatively few specimens alive today are found mostly in extremely cold, dark waters, under Arctic ice or in the deep ocean.

The most unusual of these ancient survivors is the holopus, which lacks the delicate, feathery, plankton-trapping fan of other sea lilies. Instead, it possesses a smaller number of thick, segmented tentacles that are splayed out like a hand. These thick limbs can close into a tight “fist,” and like the predatory tunicate, this is likely an adaptation for trapping passing animals as food. If a predatory, alien starfish hand in the deep ocean wasn’t eerie enough already, these animals tend to live upside down, hanging like bats from underwater ledges and cave ceilings.

The giant squid might be the deep’s most famous tentacled monster, but jellyfish have an abyssal terror of their own that has rarely been seen by human eyes. Billowing through the water like one of J.K. Rowling’s dementors, the deep reddish-black Stygiomedusa gigantea lacks the stringy, stinging tentacles of many other jellies but trails five flowing, sheet-like muscular arms that can reach more than 6 meters (20 ft) behind it.

These fleshy curtains are actually massive versions of the “oral arms” other jellyfish species use to clutch their prey and are extensions of the digestive system, lined with microchannels that carry gastric enzymes and nutrients to and from the rest of the body. This means that prey are already being digested once they’re wrapped up in the suffocating folds of the monster’s arms, which are virtually invisible in their surroundings. They are the closest thing in nature to a living, carnivorous shadow. As terrifying as it is, it does seem to have a friend. A small fish called Thalassobathia has been observed following it around, but little is known about the nature of this symbiosis.

Discover more than 40,000 Instant Video titles and get free shipping with Amazon Prime at Amazon.com!

Named for their slimy, scaleless skin and almost gelatinous flesh, snailfish are closely related to the famous “blobfish” and the more colorful, more elaborately finned lionfish. They can be found in a variety of marine environments, from warm kelp forests to the deepest waters in which any fish has ever been observed alive.

These tadpole-like animals look relatively innocent, maybe even a little cute, but don’t be fooled—even without nightmarish tentacles or demonic fangs, some snailfish exhibit a sinister streak with their parasitic reproductive behavior. Using retractable, tentacle-like ovipositors, the females of some deep-sea snailfish in the genus Careproctus inject their eggs into the gill chambers of live king crabs, including the species we humans like to eat. A huge, spiny, well-armored crab is an effective place for a small, squishy fish to hide its young from predators, but the presence of the eggs makes it harder for the crab to breathe, stunts its growth, and may even lead to lethal necrosis of their gill tissue.

This gelatinous, worm-shaped creature is actually a member of a species of jellyfish called siphonophores. Like all siphonophores, including the well-known Portuguese man o’ war, its body is actually a mass of individual creatures, each one acting like a single organ or appendage to form something between a colonial organism and a single body. A chain of pulsating swimming polyps propel it through the water, trailing behind it a collection of both feeding polyps and venomous stinging polyps. In the case of the erenna, the stinging polyps are also equipped with bright red, luminous tips, which are repeatedly reeled in and released.

The rapid movements of these appendages seem to imitate tiny shrimp, attracting small fish that are immediately paralyzed and pulled into the feeding polyps, which distribute nutrients throughout the “body.” This makes the erenna the only known example of its phylum with a luring mechanism, though more may be out there, considering what a common and effective strategy it is in the deep.

Related to earthworms and leeches, marine polychaete worms tend to be considerably more elaborate annelids, equipped with spines, armor plates, feathery gills, tentacles, fang-like mandibles, multiple eyes, and rows of foot-like or fin-like protrusions. Some species even spend their entire lives gracefully swimming, as you might have guessed about a genus with a name like “swima.”

Several species of these beautiful creatures have also been referred to as “green bomber” worms, due to their strange and unique defense mechanism. Each worm possesses a row of tiny green pods near its head that are packed with light-producing bacteria. When attacked, the worm can drop one or more of these pods, which flare up with brilliant green light for several seconds. As the worm swims away, predators may be confused into attacking its “light bombs” and lose track of the real animal, not unlike the ink cloud tactics of cephalopods. 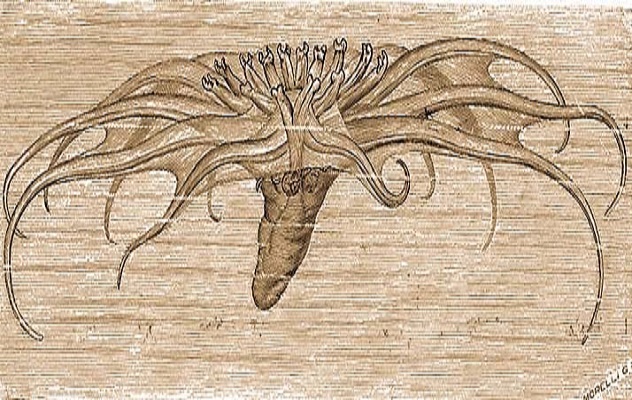 Pelagothuria natatrix was first described in the 1890s. It was said to be a common sight on deep sea expeditions at the time but has been rarely seen since.

From records of its anatomy and a few dead specimens, we know that this animal is actually a highly unusual sea cucumber that spends its entire life adrift in the water. Its transparent, umbrella-like swimming web is an extreme modification of the tentacles that normally ring a sea cucumber’s mouth, dwarfing its tiny, bag-like body. It seems to feed on any tiny particles that fall into its gaping, funnel-like throat.

With its shrunken body and huge “fins,” Pelagothuria presumably never needs to rest on the sea floor, unlike other swimming sea cucumbers living in the deep sea, who still spend most of their lives sifting for food in marine snow. It is essentially a sea cucumber living the lifestyle of a jellyfish.

Read more from Jonathan at bogleech.com.