How can one express the complex emotion of love?

A broad range of art forms have been used for this very purpose. There’s no doubt you’ve heard the romantic tale of the Taj Mahal, a mausoleum built by an emperor for his favorite wife who died giving birth to their 14th child. It’s both achingly stunning and depressing. A teardrop glistening on the cheek of time, as the poets say.

This domed symbol of love, however, isn’t the only grand romantic gesture made through art. From Picasso to the simple farmer, men have wooed women by whatever means are at their disposal. Art and creativity are as varied as people.

10 A Lopsided Portrait In A Ring 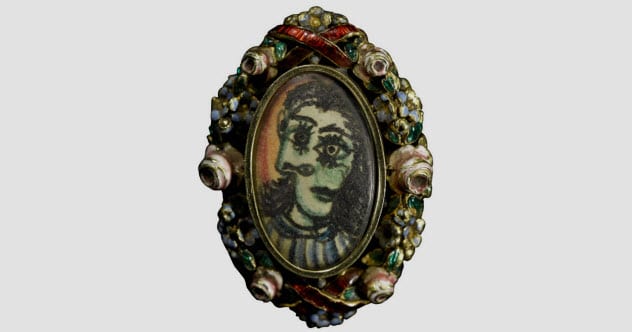 Most women would be revolted at the gift of a misshapen, Frankenstein-esque portrait of themselves embedded in a ring, but Pablo Picasso could get away with it. He painted his lover, Dora Maar, surrounded by flowers on a ring that he designed.

It was an apology gift after they had a dramatic fight one night along the River Seine. He was sore because she had convinced him to sell a painting for a mere ruby ring. So she yanked it from his hand and threw it into the river in a rage.

That ring was never recovered, but Picasso did present her with this work of art as an apology. Their affair was tumultuous and eventually ended. But she kept the ring until her dying day in 1997.[1]

9 Performance Art With A Twist 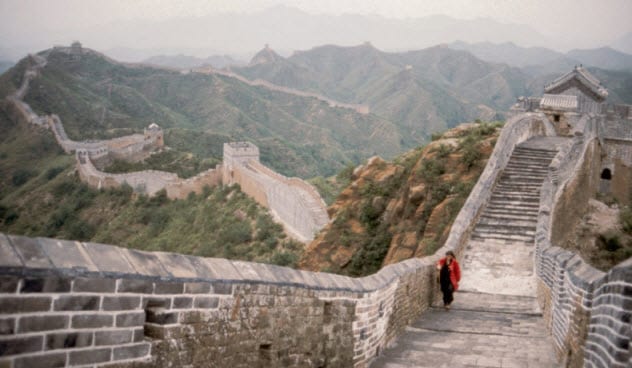 Life and love don’t always go as planned, but the journey is always poetic. Two lovers, Marina Abramovic and Ulay, wanted to be the first couple to walk the Great Wall of China, each beginning at opposite ends and meeting in the middle. When they finally reached each other, they planned to marry on the spot.

It was many years later that the Chinese government finally gave permission for this powerful art performance that pushed the boundaries of convention. In 1988, they went through with the project. They called the piece, simply, The Lovers. It took three months to reach each other. She began her journey on the side with the mountains, and he walked from the Gobi Desert. When they finally embraced, they wept.

At this point, there had been numerous infidelities. Layers of resentment had built up to a breaking point. Instead of marrying at that meeting, they broke off the relationship in a surprising twist. The idealized romantic gesture had turned a corner. The Lovers demonstrated the course of a real human relationship. As often happens in art, the meaning changed halfway along.[2] 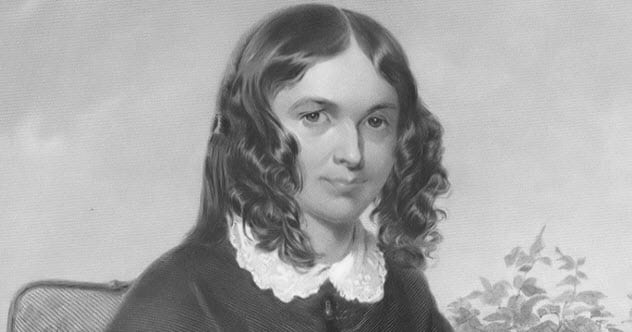 Sonnets from the Portuguese was never intended for publication by Elizabeth Barrett Browning. She wrote them for Robert Browning, and the sonnets described their entire intimate relationship from start to finish.

After they were married, he insisted that she publish the collection. They threw the word “Portuguese” in the title to shift the focus from an autobiographical nature. He told her that they were the best sonnets since Shakespeare.

Still, they remain some of the most famous love poems from the Victorian Age. The first line of “Sonnet 43,” for example, is one that you probably don’t know that you know: “How do I love thee? Let me count the ways.”[3] 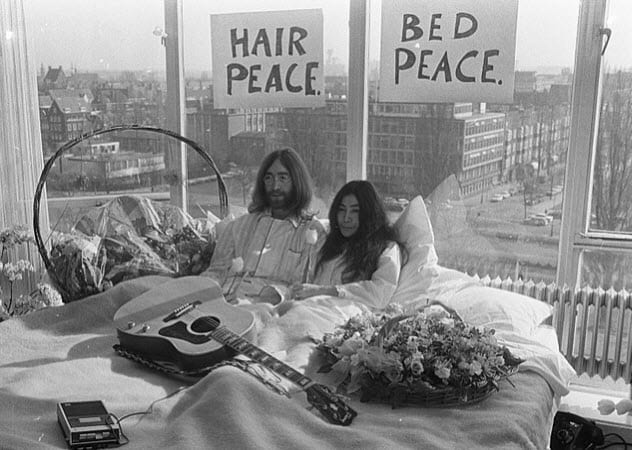 There was an art movement of “happenings” in the 1960s, and one such performance took the form of a “Bed-in for Peace.” John Lennon and Yoko Ono decided to spend their honeymoon in bed, surrounded by protest signs, at the Hilton in Amsterdam. The Vietnam War had been raging for 14 years at this point. So, what did they have to lose?

The global press was in the bedroom 12 hours every day with cameras rolling and peace discussion flowing. Yoko Ono said, “[As an alternative to war,] everybody should just stay in bed and enjoy the spring.”

She was an artist in her own right who was involved with the Fluxus movement, which created art from everyday life. Lennon and Ono used their honeymoon to spread their message to “make love, not war.” As of 2016, the suite in which their performance took place could be rented for $2,400 per night.[4]

For seven years, Richard Wagner, the famous composer of the Romantic period, had an affair with the married Cosima von Bulow. Finally, she divorced and they were able to marry in 1870. In that first year, Wagner composed a tender serenade for Cosima in secret.

This gift of love surprised her on Christmas morning at sunrise as it was played by a small ensemble on the winding staircase outside her bedroom. It was also Cosima’s birthday. She wrote in her diary:

As I awoke, my ear caught a sound which swelled further and further; no longer could I imagine myself to be dreaming, music was sounding, and what music! As it died away, Richard came into my room with the five children and offered me the score of the symphonic birthday poem—I was in tears, but so was the whole house.[5]

5 The Acting Role Of A Lifetime 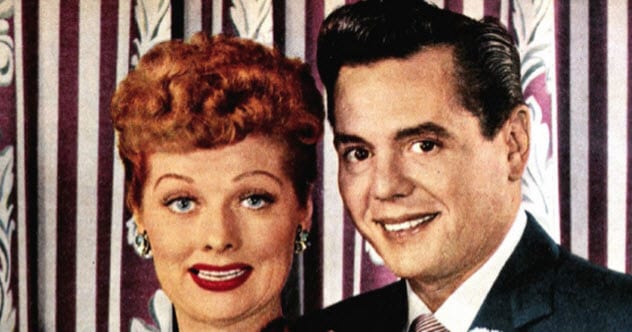 She was a fiery redheaded actress with an unparalleled sense of humor, and he was a devilishly handsome Cuban musician who performed at a nightclub. That’s right, we’re talking about Lucille Ball and Desi Arnaz.

After a six-month courtship, they were married. Then CBS wanted to transfer her I Love Lucy persona from radio to television. She insisted that the spouse be changed to her real-life husband, Desi. Executives weren’t convinced that was a good idea. Arnaz had a strong Cuban accent, and they were certain he wouldn’t appeal to a wide audience. Lucille Ball wouldn’t take no for an answer, of course.

They toured together in a vaudeville act to show that they could win over the hearts of the masses. She was correct. And this acting role gave Desi the opportunity of a lifetime to star in a hit show for six seasons with 40 million viewers tuning in each week. Lucille’s romantic gesture of artistic opportunity was above and beyond the gift of a lifetime.[6] 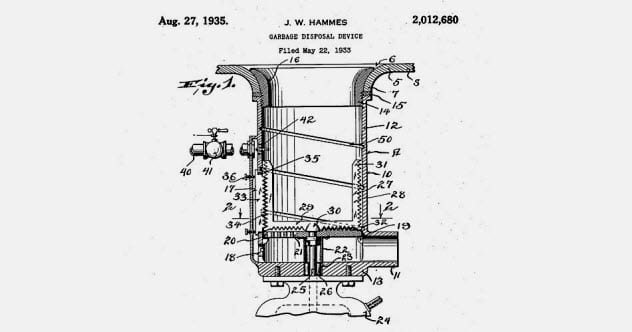 In the early 1900s, an architect from Wisconsin named John W. Hammes had a brilliant idea to make his wife’s chores a little easier in the kitchen. “Happy wife, happy life,” as they say. He wanted the kitchen cleanup to be a smoother process, so he had an epiphany. He went immediately to his basement and started brainstorming designs for his invention.

Finally in 1927, he invented the first garbage disposal. These early prototypes were called “electric pigs.” After being granted a patent, he started selling them in 1938.[7]

3 A Song Written For His Best Friend’s Wife

In the 1960s, Eric Clapton and George Harrison were good friends. It’s common knowledge that Eric fell in love with George’s first wife, Pattie Boyd. She was the muse for George’s song “Something.”

Then Eric wrote a song for her that she happened to like even more, and it won her over. Pattie said, “We met secretly at a flat in South Kensington. Eric had asked me to come because he wanted me to listen to a new number he had written. [ . . . ] He . . . played me the most powerful, moving song I had ever heard. It was ‘Layla.’ ”

It was later the same night when George confronted them and asked what was going on. Eric responded, “I have to tell you, man, that I’m in love with your wife.” What followed was perhaps the most epic rock duel in history. (Eric won.)

Pattie ended up with another classic song written for her by Eric called “Wonderful Tonight.”[8] 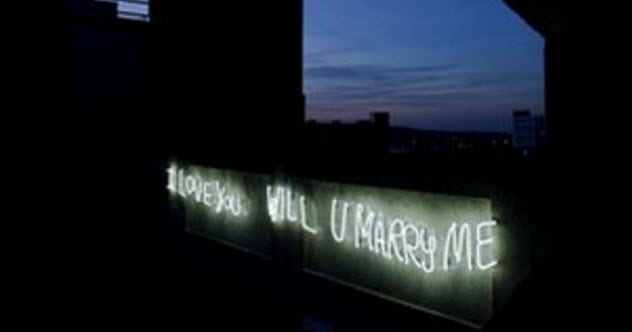 In England, graffiti isn’t the taboo art form that it is in the USA. For example, Banksy’s art is adored and protected all over the country. When a man asks a woman to marry him by spray-painting a brick wall in Ohio, he’s arrested and fined. When the same thing happened in Sheffield, England, the spray-painted proposal was admired and untouched for more than 10 years on a bridge along the skyline.

Recently, the words were even immortalized by the city in bright, neon lights: “I Love You Will U Marry Me.” The street artist finally stepped forward and admitted that he had done it. Although he was afraid of heights, he wanted to illustrate his love as boldly as he knew how. In neon permanence, this demonstration of love glows on.[9] 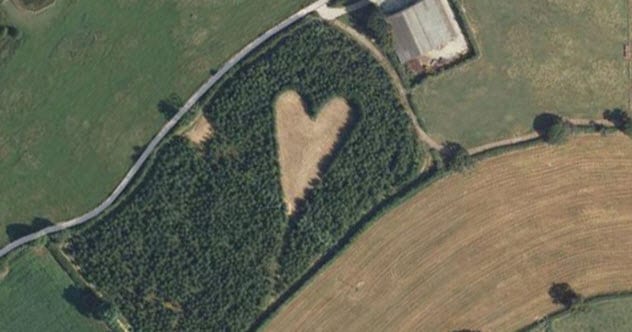 When his wife’s heart gave out, farmer Winston Howes was grief-stricken. In a final act of love, he planted thousands of oak trees near his farmhouse but kept a heart-shaped meadow open in the middle. He made sure that the heart pointed toward his wife’s birthplace. Howes said, “I sometimes go down there, just to sit and think about things. It is a lovely and lasting tribute.”

For years, this special meadow remained a family secret. Then one day, a man in a hot-air balloon flew overhead and took a photograph of the heart-shaped field. It’s designed so perfectly between the trees that you can even see it on Google Maps. Howes even planted daffodils that bloom every year in the spring.[10]

Read about great historical romances on 10 Great Romances That Shaped History and 10 Dating Tips From History That Could Improve Your Love Life.