The star of dozens of movies, cartoons, and comics, Godzilla is a pop culture phenomenon beloved the world over. He was even a favorite of demented North Korean dictator Kim Jong-il, who kidnapped a film director to make his own version. But that’s not the only interesting fact about the King of All Monsters. 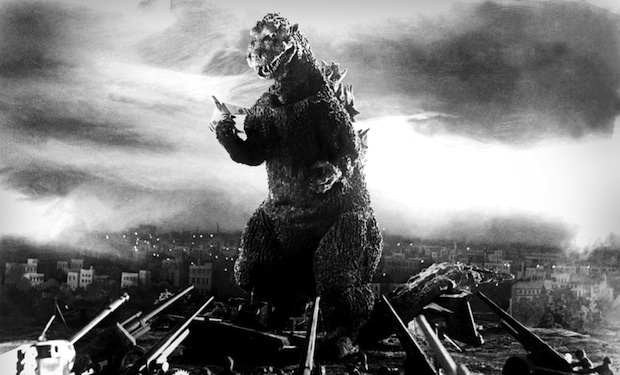 It is impossible to overstate how profound an impact the bombing of Hiroshima and Nagasaki had on the people of Japan. Within instants, whole cities were practically vaporized, with thousands succumbing to burns and radiation poisoning in the days and weeks to follow. This tragedy, along with the fate of the Lucky Dragon 5, a Japanese fishing vessel that unwittingly sailed into American nuclear testing grounds in the South Pacific, helped to inspire the creation of Godzilla.

Gojira (a Japanese portmanteau of “gorilla” and “whale”) was released in 1954. The irradiated dinosaur was based on a blend of several species, including a Tyrannosaurus rex and an alligator. Its rough, pebbled skin was inspired by the hideous keloid scars suffered by survivors of the atomic blasts. While later Godzilla films were all in campy good fun, the original was a stark metaphor for the horrors of technology. It became a massive blockbuster, with the most profitable opening day in Japanese cinematic history.

In the early years of the franchise, Godzilla was meant to symbolize America and its bombing of mainland Japan. But tensions soon cooled between the two nations. Instead, Godzilla’s enduring popularity among the Japanese meant that the character became a symbol of the Land of the Rising Sun itself.

Other monsters had their own meanings, too. When China began exploding nuclear ordnance, they were assigned King Ghidorah. The giant pterosaur Rodan was meant to symbolize the USSR. Godzilla vs. Mechagodzilla (1974) was often interpreted as an allegory for the US occupation of Okinawa, with Godzilla representing Japan and his mechanical nemesis standing in for the US. Even today, tensions remain high on Okinawa, with American military personnel routinely accused of victimizing locals. There have also been allegations that the US military used Okinawa to store all manner of deadly chemicals and weapons, including Agent Orange.

8The Men Behind The Mask 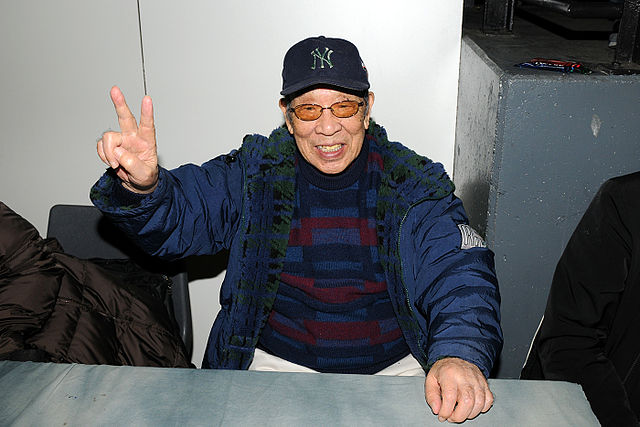 The latest installment in the franchise, 2014’s Godzilla, features a CGI monstrosity, with a design partially based on komodo dragons and bears. But there were no computers to bring the original Godzilla to life. Elji Tsuburaya, the head of the Visual Effects Deparment for Toho, was tasked with creating the first version of the famous monster. Tsuburaya had sharpened his skills directing wartime propaganda films—his style was allegedly so realistic that Americans believed it was actual battle footage.

Tsuburaya had originally intended to use stop-motion techniques similar to those used to create King Kong, but he was forced to resort to a rubber suit when it became clear the stop-motion would be too expensive. The man chosen to wear the first Godzilla suit was Haruo Nakajima. A martial artist, he was able to bring a marked intensity to the role. It wasn’t an easy task—the suit, made from melted tires, weighed 100 kilograms (220lbs). It was difficult for Nakajima to move or see, and torturously hot beneath the studio lights. After filming a scene, a cup of sweat would have to be poured out of the suit.

With the exception of his colossal size, Godzilla’s most recognizable feature is his horrible, unearthly roar. The producers of the original 1954 film experimented with various animal sounds to to create the monster’s voice, but found none to their liking. The film’s composer, Akira Ifukube, eventually proposed they use a musical instrument to achieve the otherworldy tone they were looking for. Ifukube’s suggestion was a success and the roar was finally created by dragging a leather glove smeared with pine tar down the strings of a double bass.

Subsequent Godzilla films have produced new versions of the roar. The sound designers of the 2014 adaptation, Erik Aadahl and Ethan Van der Ryn, did a great deal of experimentation to find their own perfect roar. While they refuse to divulge their exact formula, they did acknowledge renting enormous speakers from the Rolling Stones to test it out on the streets of Burbank, California. Although they did their best to inform the public what they would be doing, Aadahl claims terrified citizens were calling the Burbank police department from miles around, convinced the roar was real.

Some reboots, such as Christopher Nolan’s Batman franchise, rank as even better than the originals. But few films have been as widely reviled as 1998’s Godzilla, starring Matthew Broderick. Despite a solid box office return, the movie was despised by critics and fans alike. Roger Ebert’s review called it, “a cold-hearted mechanistic vision, so starved for emotion or wit.” Other critics were even less kind. In a bizarre turn, one of the songs used in the film, Rage Against the Machine’s “No Shelter,” actually attacks the movie, with the line “Godzilla, pure motherf–king filler, get your eyes off the real killer.”

One of the biggest complaints was a complete redesign of the title character—this version was a giant, mutated iguana completely absent of whatever charm the original Godzilla possessed. Toho would later refer to this version of the monster as “Zilla.” Although (spoiler alert) the creature is killed at the end of the movie, Toho resurrected Zilla for the film Godzilla: Final Wars. In Toho’s version, Zilla takes on the original Godzilla, destroying the iconic Sydney Opera House in the process, but is quickly defeated.

Despite the character’s horrific origins, Godzilla has been the subject of several different animated series, including one in the late 1970s produced by Toho and Hanna-Barbera. The show, which followed a group of research scientists, featured a friendly Godzilla who frequently came to the rescue of his human friends. It was also notable for the inclusion of the character “Godzooky,” Godzilla’s little nephew, most probably a homage to Scrappy Doo.

Another (surprisingly decent) animated series followed the 1998 movie, and while it initially did well, it couldn’t compete with the Pokemon craze and folded after 40 episodes. Certainly the most bizarre Godzilla cartoon was Marv Newland’s 1969 classic Bambi Meets Godzilla. The hand-drawn black and white short, which runs under two minutes, is composed primarily of the opening credits. Bambi contentedly munches grass as “Call to the Dairy Cows” from the opera William Tell plays. It ends with Godzilla’s foot coming down, crushing the little deer flat.

Over the course of dozens of movies, Godzilla acquired a host of different enemies, many of whom were fairly ludicrous rubber creations. Perhaps the dumbest villain comes from the movie Godzilla’s Revenge. A 1969 stinker that was aimed at small children, Godzilla’s Revenge features a small boy who is being bullied; all the monster scenes are actually his dreams. The villain, Gabara, is a dopey cat-lizard creature likely based on the legend of the demonic Japanese Oni. His roar inexplicably sounds like laughter.

Mothra is a recurring feature in Godzilla films. Always a force for good, she is every bit as intimidating as the insects around your porch light, only inflated on a massive scale. There have, however, been a handful of truly fearsome contenders, including Destroyah, who managed to fatally wound Godzilla. Of course, the most awesome foe in the stable is King Ghidorah, a three-headed monster based on the mythical hydra. Ghidorah was so detailed and difficult to manipulate (requiring an actor inside a huge suit and a team of puppeteers to move his appendages) that special effects coordinator Elji Tsuburaya severely limited his screen time during his first few appearances.

The Make-A-Wish Foundation has always shown a willingness to go above and beyond to make fulfill the dreams of children suffering life-threatening illnesses. In 2013, thousands of people in San Francisco turned out to cheer on five-year-old Miles Scott, who got to live out an adventure as “Batkid.”

In 2014, Make-A-Wish reached out to Chicago five-year-old Maddex, who wished to star as Godzilla in a movie. Maddex, who suffers from acute lymphoblastic leukemia, undergoes an extremely painful regimen of treatments, including spinal taps. Godzilla has always brought him comfort—his home overflows with toys, shirts, and comic books featuring the giant lizard. Thanks to an army of volunteers, Maddex’s dream has come true in a five-minute short, which includes camera shots from helicopters and cameos by Chicago legends like Mike Ditka. Costumed as a beast dubbed “Madzilla,” Maddex rains chaos on the city and does battle with other monsters. The short is due out in August 2014.

Arguably the most famous of the giant monsters, it was inevitable that King Kong and Godzilla would clash. Of course, Godzilla was about six times taller than Kong’s 7.5 meters (25 ft), but dramatic adjustments in size have never been an issue in such films, and when the beasts clashed in 1966’s King Kong vs. Godzilla, they were about equal in size. To mitigate the giant lizard’s thermonuclear breath, Kong was given power over electricity. Like most Toho fare, the movie was hardly a special effects phenomenon, featuring two men doing battle in rubber suits.

In the ensuing decades, a curious legend has sprung up around the film. According to the rumor, the Japanese version featured Godzilla as the winner of the battle, whereas King Kong won in the American version. There were actually significant differences between the two versions, mostly to introduce English-speaking characters that would give the film a broader appeal for its US release, but the fight between the monsters was unchanged. The final showdown occurred on Mount Fuji and spilled into the ocean. In the end, only King Kong rises from the sea, leaving the outcome of their clash unclear. 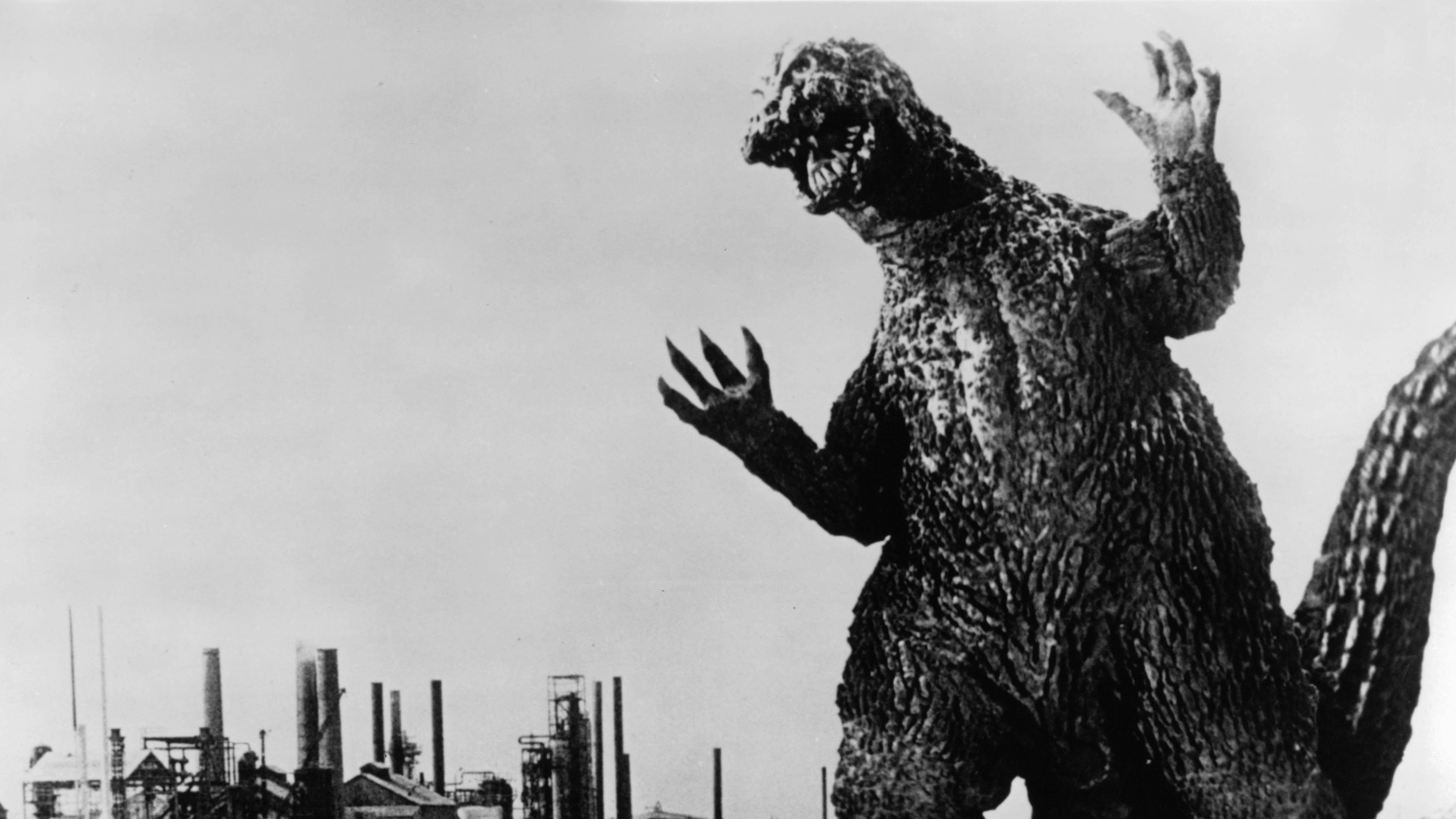 Because bigger is always better, the 2014 version of Godzilla is the largest ever, some 106 meters (350 ft) tall and weighing over 160,000 tons (over time, Godzilla has tended to grow in size so as not to be dwarfed by increasingly large buildings). Of course, there is a reason that beasts of this size exist only in fiction—they are physiologically impossible. There are a number of surprisingly scholarly articles that explain the various reasons Godzilla couldn’t exist. First, there is no way the monster’s skeleton could support its body, even if it was made of titanium. The heat generated by its muscles would be tremendous, and there would be no way its heart could pump blood to its extremities.

At the more grotesque end of the spectrum, in his battles with humanity and other gigantic monsters, Godzilla tends to take quite a beating, toppling over time and again only to rise even stronger than before. Unfortunately, the impact of such a great weight falling from a height would be tremendous, enough to make the lizard explode upon hitting the ground. For a rather evocative example, the physics of falling giants was explained in an essay by J. B. S. Haldane in 1928: “You can drop a mouse down a thousand-yard mine shaft; and, on arriving at the bottom, it gets a slight shock and walks away, provided that the ground is fairly soft. A rat is killed, a man is broken, a horse splashes.”