Mother Nature has seen fit to adorn her animals with all sorts of bizarre and colorful features. While they certainly make for great National Geographic spreads, they’re not just for show. They also allow each of these animals to survive, thrive, and carve out an evolutionary niche of their very own. 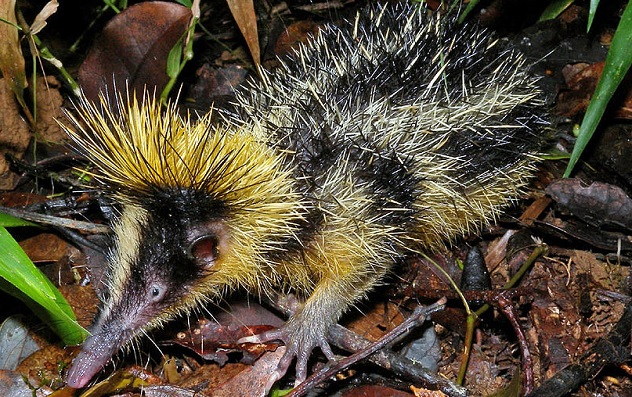 The lowland streaked tenrec—found only on the Eastern coast of Madagascar—resembles less a rodent and more a spiny little bumblebee. Its spines can be used with adorably lethal force, as the tenrec is known to attack enemies with a spiky headbutt.

Oddly enough, these spikes can also be used to communicate through a method known as stridulation, which is a noise made via the rubbing of body parts. When crickets keep you up at night by rubbing their legs together to produce an incessant chirping noise, that’s stridulation. This is common behavior among insects, but has never before been displayed by mammals, until now.

Similarly, the lowland streaked tenrec can communicate by using a patch of quills on its back to create a high-pitched sound. The specialized quills vibrate, rub against one another, and produce the noises through friction. Most of these calls are beyond the range of human hearing, so they’ve been recorded with bat detectors.

9Chiton See Using Hundreds Of Rock Eyes In Their Shells 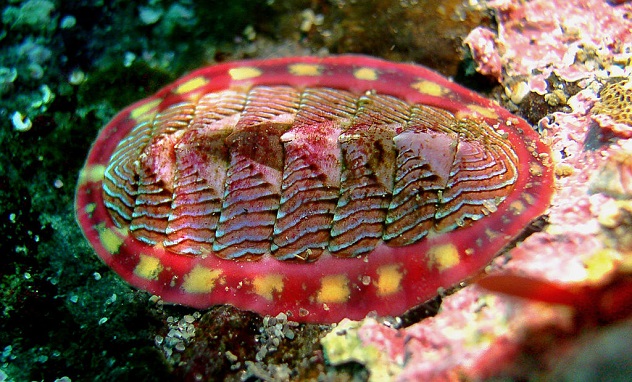 Chiton are a variegated group of marine mollusks that often feature fancy patterns on their backs. They also have numerous tiny beads embedded within their shells—these were originally thought to act as simple light sensors, but several years ago scientists learned that these beads are actual eyes with finely crafted lenses. Not only do they sense light, they’re also capable of detecting shapes and movement to help the chiton avoid sea-beasties. With these beads scattered across their backs, the chiton’s shell is essentially a large calcified eye.

The tiny individual components are made of aragonite and are actually far less sophisticated than similar-sized eyes on other organisms. In addition, their vision is 1,000 times less refined than our own. However, they’re perfectly suited to the chiton’s habitat, since they live in churning tide pools. Squishy protein eyes like ours would quickly be eroded into nothingness by rushing waters, leaving us blind and defenseless against the many horrible creatures that live in the water. 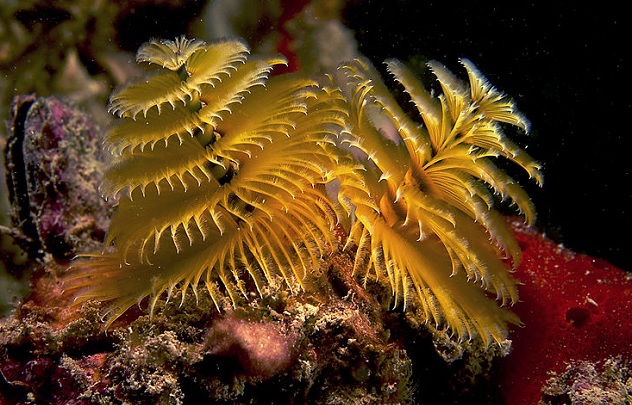 Spirobranchus giganteus specimens are colloquially referred to as “Christmas tree worms” due to their brilliant colors and segmented crowns that mimic the boughs of pine trees. Flashy as they are, these little worms are less than 5 centimeters (2 in) long and spend almost all their lives inertly anchored to the surfaces of coral.

The worms live in cozy, self-constructed tubules built out of a mixture of sugary mucus and crystallized calcium secreted from special glands. Other than this initial feat of homemaking, these are hopelessly sedentary creatures—once attached to corals, they pretty much chill there until they die. The business parts of the worm actually burrow into the body of the coral while their tree-like plumes remain exposed.

And these same plumes that are responsible for the worms’ resemblance to a decorated pine also carry out basic processes, such as breathing and eating. Regarding the latter, the increased surface area is useful for trapping the microscopic particles of plant life that compose a worm’s diet. Since it’s stationary, it hunts simply by swaying in the current, passively collecting phytoplankton in its branches.

7The Camouflaged Looper Can Blend Into Anything 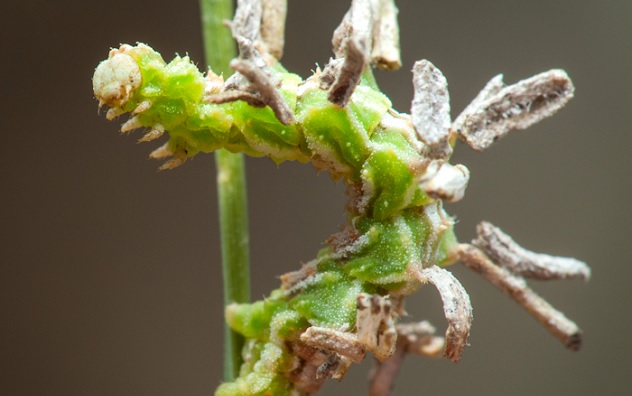 Many animals use camouflage to avoid detection by predators or to ambush lesser creatures that will hopefully become lunch. But the Synchlora aerata—or camouflaged looper—puts most of them to shame by creating crazy “costumes” on the fly, allowing concealment in a variety of settings. It does this by adorning itself with leaves, flowers, branches, and whatever else it tears off while scavenging for tasty plants. Thanks to this dynamic camouflage, the looper never looks out of place and so remains perfectly hidden.

And the looper takes it a step farther, displaying an unnatural swaying gait while in hiding. You’d think sudden herky-jerky movements would draw predators’ attention, but the looper’s no dummy—it further consolidates the illusion by imitating a piece of vegetation blowing in the wind.

Sadly, it loses these amazing abilities when its time as a caterpillar runs out and it turns into a beautiful emerald green moth. During this phase, it closely resembles a leaf and can fly, meaning it no longer has any need to gussy up with flower petals and dandelions. 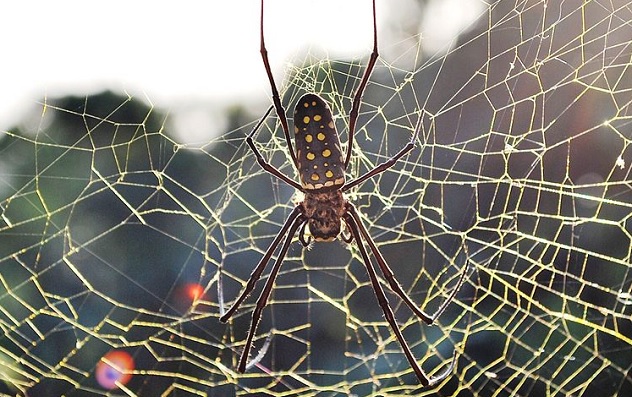 The orb weaver spider has grown comfortable in its evolutionary niche, since its silver-tinted body ensures that it’s attractive to prey yet easily overlooked by predators. This is especially true when the spider unleashes its elaborate disguise ruse. The patterns it weaves into its web take on the appearance of bird droppings—the weaver will often incorporate bug carcasses and other debris as well, just to further disgust anything that might have wanted to eat it otherwise.

Scientists initially thought resembling poop was mere coincidence and not an actual survival tactic. To find out for sure, they compared the disguised webs with actual bird poo splatters. They quickly discovered that it was no coincidence—the colors and textures match so well that wasps and other predators cannot effectively distinguish the spiders from the actual poo.

Other species can also masquerade as turds—one of them, the bird-dung crab spider, completes its disguise with an authentic stench produced from scent glands. This stink also has the added benefit of attracting flies for the spider to munch on.

5Inca Terns Win Mates By The Power Of Their Mustache 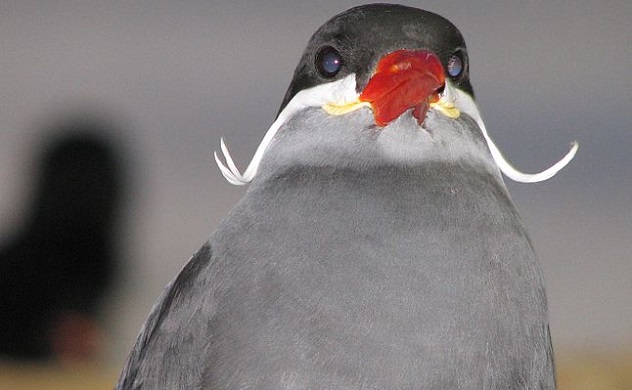 The Inca tern is an attractive, medium-sized bird found along the Pacific coast of South America. Perhaps their most distinctive feature is their “mustache”—these birds are among a select few animals that sport an upper lip accessory.

These mustaches aren’t just for the sake of fashion either—they’re an evolutionary signifier that the terns use to pick suitable mates. Since birds usually don’t sit down to dinner and discussion before getting busy, they need another method of quickly deciding between a selection of potential partners. Enter the male’s snazzy white mustache—a sign of good health and vitality. The condition of the appendage reflects the condition of the tern, meaning a full and vibrant ‘stache helps them show off their good genes and entice the female into working together to preserve their species.

Why is wombat poop cube-shaped? Researchers reveal its mystery.

Wombats have one of the most peculiar pooping methods in all of the animal kingdom. When they do their business, they leave behind poo in the shape of cubes. But this square scat isn’t just a case of nature having fun at the poor wombat’s expense—with their shabby eyesight, the nocturnal marsupials must strategically place their poops in order to mark their territories.

Wombats even place their feces at nose level, so others can easily pick up the scent and realize that they’re on a possible rival’s turf. This is where the bizarre shape of their poo comes in handy. To achieve this careful placement, the wombats scatter their poo on raised surfaces such as logs, mounds, and even mushrooms. Round or cylindrical pieces would be useless because they would just roll off and disappear among the foliage. Square dumps, however, stay put.

In addition, the wombats’ cuboid poop helps keep it well-fed and healthy. Wombats have an incredibly long digestive tract, which is useful for drawing nutrients from a green, plant-based diet. This extra-long path squeezes every last drop of water from the waste, shaping it into neatly formed squares and depositing it thusly.

3Sloths Are Green Because They Grow Algae In Their Fur 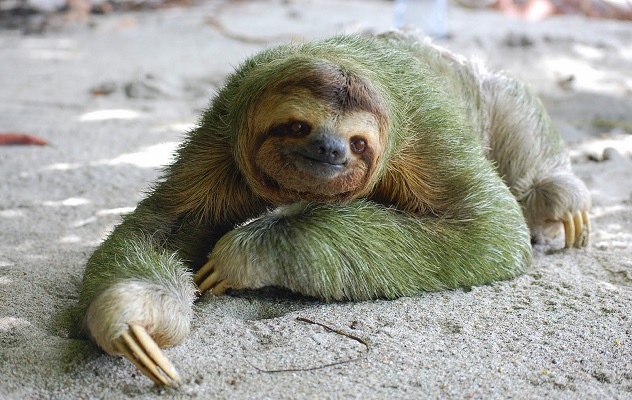 It might seem unlikely that such a famously sluggish animal such as the sloth could possibly procure enough food to survive. However, it turns out that sloths are natural farmers. Their fur is home to a species of moth that lives nowhere else in the world except within the sloths’ plumage. These moths are so comfortable living on these slowpokes that they actually shed their wings and spend the rest of their days lazing about their fuzzy host.

The sloths descend from their trees once a week, risking jaguar attacks to defecate at ground level. Though it may seem unnecessary, this task allows for the moths to lay fresh eggs, incubating their larvae in hot sloth turds. Reared on feces, they mature into moths and fly up into the trees to find a vacant sloth.

The cycle continues as the moths die and relinquish nitrogen. This nitrogen is the preferred food source for another organism living on the sloth: algae. These tiny plants are responsible for the green tint obvious on many sloths. More importantly, they offer a static food source that requires zero energy to harvest, which is perfect for an animal slower than most tectonic plates. 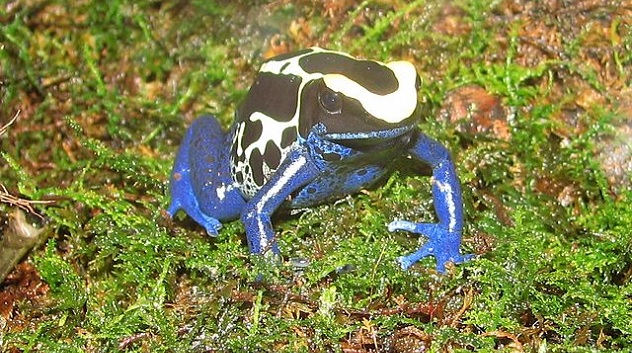 Dyeing dart frogs display the animal version of a stop sign on their backs. Their vibrant, colorful markings alert predators that the frogs are very poisonous, while Plain Jane frogs offer no such warning and are quickly gobbled up.

Scientists were stumped when they discovered that no two dart frogs look the same and that each one sports its own unique design. To them, it seemed like a more effective warning would be for each pattern to be virtually identical—that way, there’s no room for interpretation among predators.

Upon further study, scientists learned that the frogs followed two movement patterns: 64 percent of them zipped about randomly, while the remaining 36 percent preferred to move in straight lines. This offered the scientists an important clue regarding the varied markings, since it appears that the patterns are dependent on a frog’s preferred evasive tactics. This allows the frogs to fool predators by creating a type of illusion that throws off an attacker’s timing. The markings also denote the speed of the frogs, since the straight-liners were found to move about three times faster than the random zippers.

It’s common knowledge that dolphins are among the smartest and most playful animals in existence. Yet researchers are still often surprised by the bounds of cetacean creativity—when studying younger individuals, it was observed that they engage themselves by blowing the aquatic equivalent of smoke rings.

The cuddly sea mammals can form all sorts of rings and bubbles—they’ve even been seen playfully whipping up small vortexes like a child creating whirlpools in the bathtub. Furthermore, dolphins often use their fins to manipulate the rings—sending them in different directions, combining them into larger rings, and even threading the needle.

This might seem like pure whimsy, but studies have shown that dolphins use these rings to hunt prey as well. They do so by swimming underneath a school of fish that they wish to eat and then blowing ring after ring until the fish either get trapped in the bubble vortex or get blown away from their school and are left alone for easy pickings.