As the population continues to grow, and fossil fuels continue to dwindle, we’ll find it increasingly hard to produce energy, food, and clean water. But advances in technology—some simple, some mind-boggling—are unveiling new ways for us to thrive on the planet’s limited resources. 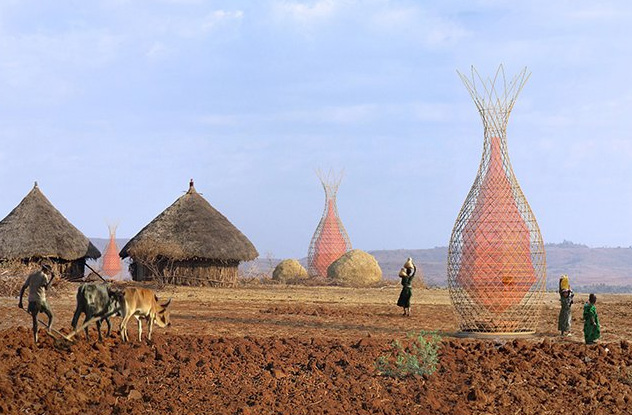 Ethiopia has the least access to clean drinking water among all African countries. Women and children from most villages have to travel many hours a day to collect water, which is oftentimes dirty and contaminated from being shared with livestock and other animals.

“Warka Water” is a solution designed by two Italian engineers and is based on a very simple principle. It traps water vapor from the air through condensation. Standing 9 meters (30 ft) tall, the framework is made out of bamboo and a special polyethylene fabric that collects water droplets. It weighs around 60 kilograms (130 lb) and can be put together by four people in a couple of hours without scaffolding. Each pillar can produce around 100 liters (26 gallons) of clean, fresh water a day from thin air with no effort at all.

The Ethiopian word warka refers to a wild fig tree native to the country. The warka tree symbolizes fertility and generosity and is commonly used for public gatherings and school classes.

The Warka Water project aims to be up and running in 2015 in some villages across the country. It stands as a simple, cheap, and elegant solution to solve a small part of a great problem.

The Energy Tower is a concept based on the same principle as the Solar Updraft Tower but in reverse. Instead of heating the air on the ground and making it rise, the plan here is to cool the air at the top and make it fall. To do so, scientists spray water at the head of the tower, mimicking rain. The air cools as the water evaporates. Because cold air is heavier than warm air, it drops down at very high speeds. The force of the vertical winds drives turbines at the base of the tower, producing electricity.

Such a tower would have to be staggeringly tall—1,000 meters (3,280 ft), which is almost three times the height of the Empire State Building and some 20 percent taller than the current tallest structure in the world. But it would be relatively inexpensive, considering the size. It would work efficiently in hot, dry places near water sources.

Besides generating power cleanly, the tower would also cut desalination costs by about 50 percent. Wastewater can also be purified, if cities and towns are nearby. Seawater basins near the tower can also house up to 160,000 tons of fish. Also, the cooler, humid air pumped out can change the local arid climate, making it suitable for agriculture.

Over time, salt or other solid materials can clog the turbines, but other than that, the Energy Tower would be largely self-sufficient.

Electrolux Design Lab 2010 on Financial Times ‘How to Spend It’ (Technopolis TV).

Ordinary household refrigerators, even the more eco-friendly models, make up around 8 percent of our entire electricity bill. Since the initial development in 1748 and some further modifications brought in the 1920s, refrigeration technology hasn’t changed very much. Their design certainly is different, but they still run on chemical refrigerants that pose a significant incredible health hazard if inhaled.

However, in 2010 at the Electrolux Design Lab competition, young Russian designer Yuriy Dmitriev presented his idea of future refrigeration. Instead of a standard box filled with air, his design places food into a biopolymer gel. The gel absorbs heat from the food and expels it as visible light.

The fridge has no motor. Up to 90 percent of its volume can be used as storage space. It can come in various shapes and sizes, and because it has no door or drawers, you could even mount it on the ceiling if you really wanted to.

The design is just a concept at this point, and we don’t have the technology to make it work, but it’s a view of what fridges may be like in the year 2050.

Over 50 million land mines remain unaccounted for in countries such as Angola, Cambodia, Afghanistan, Iraq, and Mozambique. People still regularly lose their limbs or even their lives to these hidden killers. Disarming even one mine is estimated to cost around $1,200, and considering that Angola alone has over 20 million of them, the total required to rid the country of this terrible plight could be over $24 billion.

Massoud Hassani, an Afghan designer and former refugee, has built his own low-cost detonation device. Weighing in at 70 kilograms (150 lb), it’s heavy enough to trigger a mine but light enough to be propelled by the wind alone. It looks like a dandelion and moves like a tumbleweed. Made out of bamboo and biodegradable plastic, this device can detonate three or four charges before it is completely destroyed. The cost of producing one Mine Kafon is just $40.

The Mine Kafon also has a built-in GPS tracking system that can detect the movements of each individual device and shows where a detonation has taken place. This helps people map out which areas are mine-free and which aren’t.

Nevertheless, the Mine Kafon is still in early stages of development and has drawbacks. It is possible for one such device to not trigger every mine it rolls over, especially if it has already detonated a few times. Another hiccup involves the terrain. No matter how hard the wind is blowing, chances are that it will not be able to push the Mine Kafon up a steep hill, out of a ditch, or through a heavily wooded area.

Hassani is aware of these issues and says that future generations of the device will be equipped with electric motors for increased mobility and metal detectors to map out every metal object, in case of a failed detonation. Even if this is not the perfect device, it’s a step in the right direction. 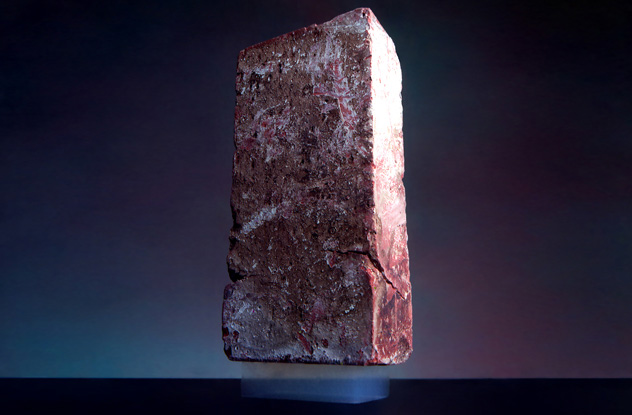 Aerogel is a solid material made from silica gel by a process of removing all liquid but leaving the molecular structure intact. It’s composed of up to 99.98 percent air, making it extremely light but also very brittle. It can hold up to 4,000 times its own weight but can easily break just by gently bending it.

Its current use today is in space science and exploration, collecting comet dust and serving as spacecraft insulation. Scientists are currently trying to figure out how to make it more resistant to external forces so it can have even more practical use.

Also known as “frozen smoke,” Aerogel could save us significantly in heating costs. Because it’s mostly air, and air is a good insulator, this silicon-based material can keep heat in or out of our homes. Other similar substances, made from elements such as carbon, have further eco-friendly uses.

Soylent: living on the meal replacement of the future

Good food takes time to prepare, while convenient food usually contains lots of fat and empty calories. So unless you have lots of time to spare, you probably eat poorly. A group of young American entrepreneurs have taken it upon themselves to solve this problem, replacing solid food with a ready-made blend of all the minerals and nutrients the body needs.

Named after the somewhat-similar product in a classic sci-fi story, Soylent powder turns into a drink that’s nutritionally equivalent to the ideal meal. Hundreds of people, the designer included, have lived solely on Soylent for months and feel better than ever.

The product is fairly cheap to produce and easy to store. As of 2014, it retails for $3 per serving and is marketed to busy people in industrialized countries. The same technology could increase in scale to cheaply combat world hunger.

Scientists are working to give the abilities of animals like jellyfish and fireflies to plants, creating trees that glow in the dark. The purpose behind this experiment, besides being awesome and quite romantic, is to replace street lamps in towns and cities. Vast sums and large amounts of fuel are spent each night on street lighting, so self-sufficient, natural light would produce huge savings.

The State University of New York is trying to splice genes from bioluminescent bacteria into plants’ chloroplasts, which are bodies in plant cells that absorb energy from sunlight. So far, the project has succeeded with tiny house plants. On a larger scale, this same process really could create trees that replace street lamps.

Nuclear power is one very effective way to solve the dilemma of CO2 emissions. While a few disasters (Chernobyl in 1986 and Fukushima in 2011) have bred fear and distrust of the technology, nuclear energy is overall far safer and cleaner than more widely used alternatives.

However, while it doesn’t consume fossil fuels, nuclear energy does have its own resource problem. It uses a comparatively rare isotope of uranium, uranium-235. Depleted uranium, U238, is a byproduct of nuclear fission and is regarded as waste, good only for stockpiling and weaponry.

The company TerraPower is developing a new type of reactor fueled by depleted uranium, or the 99 percent of uranium that’s waste just lying around. Currently there are more than 825,000 tons of this stuff in the US alone. With the traveling wave reactor, this material could power America for the next 700 years. And because of its design and the type of uranium and coolant used, an accident is said to be next to impossible.

This type of reactor has been considered for decades, but the most recent developments in the technology have attracted a lot of new attention from such figures as Bill Gates.

SURYA 12 A Home Made Solar Cooker in Just Rs.50.rv

The solar cooker is a cheap and eco-friendly device capable of concentrating the Sun’s rays onto one spot by using mirrors or reflective metals. It only takes 10–15 percent longer for the food to be ready, compared to an ordinary oven, but it operates with absolutely no fuel.

In developing countries where many people lack access to even the basics for a decent living, a self-sufficient oven is worth its weight in gold. However, that’s not saying very much—a solar cooker weighs very little, and even a small child can operate it. It also relieves the great demand for wood in areas struggling with deforestation and desertification. 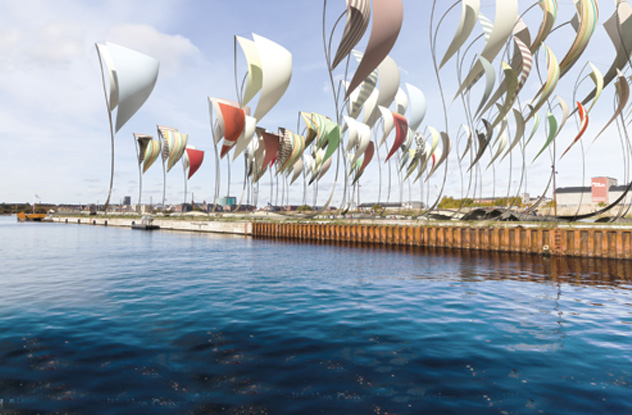 The main problem with renewable power sources like wind turbines and solar panels is that they require vast amounts of space to properly farm for electricity. They also affect the natural beauty of the landscape. A couple of wind turbines atop a green field with snowy mountains in the background look very nice and serene, but hundreds and thousands packed together create such an eyesore that people routinely reject projects to build them. The answer to this problem may lie in placing the turbines on floating surfaces, far offshore.

At the 2014 Land Art Generator Initiative (LAGI) design competition, artist Felix Cheong presented his own spin on this solution. Oscillating Platforms float on the sea and harness the power of the wind through their slender sails. They also absorb power from the tides through their underbellies. They even produce energy from the simple movement made by people walking on top.