Although we already know a bit about the famous affairs that happened during the Cold War, that particular era spanned more than four decades—enough time for a lot of wackiness. Aside from learning about the slew of ridiculous government projects, let’s also get to know some of the other little-known, extremely strange events which took place in that period. 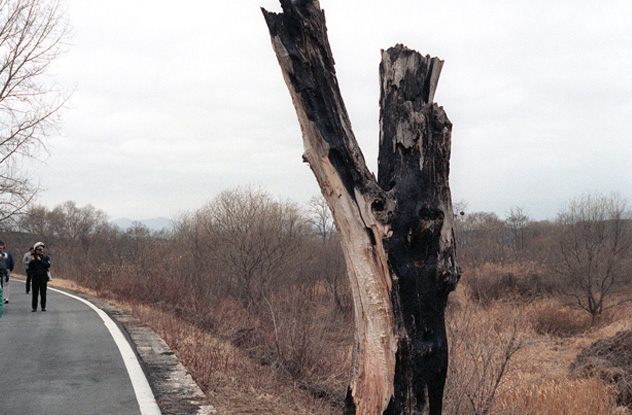 This one arguably ranks somewhere among the most bizarre reasons to start a war. Known as the Poplar Tree Incident, the whole fiasco started on August 17, 1976. American soldiers tried to trim a huge poplar tree that had been obscuring visibility in the middle of the Joint Security Area of the Demilitarized Zone. Previously, the North Koreans had refused to allow the men to trim the tree. Now, they murdered two of the Americans and injured another nine.

In the aftermath, the US debated whether to strike back. Instead, they decided to cut down the tree while showcasing an overwhelming display of force against the North. On August 21, and in full view of their North Korean counterparts on the other side, a convoy of American and South Korean soldier-engineers drove up to the middle of the DMZ and cut the tree down. Dozens of helicopters and assorted aircraft also flew overhead as a deterrent to the hapless North Koreans who could only watch the event unfold.

While the incident triggered fears of a war, it instead led to North Korean President Kim Il-Sung conveying a message of “regret” to the families of those killed—a rare statement at the time.

9The US Created A Ring Of Copper Around The Earth 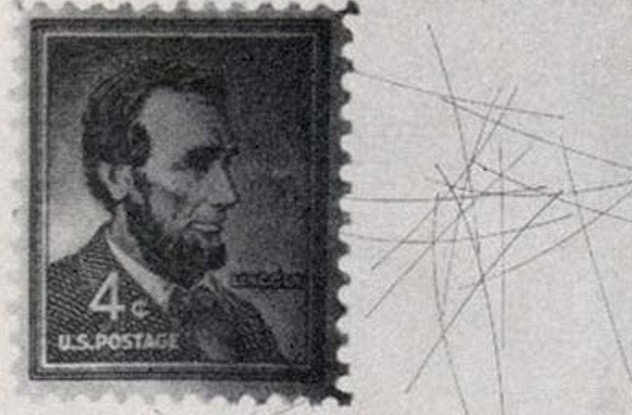 At one point the Earth had its own man-made ring of metal—thanks to the approximately 500 million copper needles the US launched into space in 1963.

Known as Project West Ford, the operation resolved to cure a major American weakness against a perceived Soviet attack on its undersea cables, which would have disrupted its long-range communications system. To prevent this, the Americans looked to the ionosphere, which was beyond the reach of the Soviets but still at the mercy of unpredictable solar storms. Then sometime in 1958, Walter E. Morrow—a scientist from MIT’s Lincoln Labs in Boston—suggested placing a copper ring around the Earth, which would be immune to both Soviet attacks and solar disruptions.

After a first attempt failed in 1961, the US finally launched the copper needles in 1963 and also successfully tested it out. While most of the needles have since fallen back to Earth, it is estimated that thousands of clumped ones are still in orbit today.

8The US Air Force Used Bears As Test Pilots

The premier intercontinental bomber of the Air Force, the B-58 Hustler, could reach Mach 2 and had been designed to carry nuclear bombs deep into Soviet territory. While superb in its design, the B-58’s poor-quality ejection capsule killed several crewmembers during one test flight. This particular incident forced the designers to design a better capsule, which they then tested on the ground using unemployed people. When it came time for live runs several thousand feet up in the air, however, the designers opted to use man-sized bears as test dummies.

After being sedated, these bears were strapped inside the ejection capsules and hurled out of the streaking aircraft before parachuting back down to be examined by its developers. While no deaths occurred during the tests, the animals did suffer major injuries, including broken bones and internal bleeding.

While we know the United States and Soviet Union were the two major players in the Space Race, Zambia also had its own space program. Sort of.

Edward Makuka Nkoloso—a small-town elementary schoolteacher with an impossibly big dream—started his ambitious project in 1964 by recruiting 10 of his countrymen, a missionary, and a 17-year-old girl (along with her cat) and training them in his one-of-a-kind space training program. He rolled his trainees downhill inside barrels and had them ride swings that he would then cut after they reached the highest point. He claimed these methods would help the trainees get used to the weightlessness of space. When it came to simulating walking on the Moon and eventually Mars, Nkoloso taught his trainees the “correct method” of moving around by having them walk on their hands.

For all his enthusiasm, however, Nkoloso failed to get any government support for his strange program. He also complained that his trainees seemed to be preoccupied with other matters. The 17-year-old, for one, ended up pregnant.

6The US Built An Underground Nuclear Ice Fortress In Greenland

If the British could come up with an aircraft carrier made of ice, then only the Americans could dream up something as radical as going under tons of ice for nuclear missile launch sites.

Wanting to know if nuclear missiles could be successfully stored underneath ice, and because they needed a location closer to the Soviet homeland, the Americans launched Project Iceworm in 1960 and set about building a massive underground complex called Camp Century in Greenland. At the time of its construction, the US officially billed the project as part of its scientific research to allay suspicion from the Danish government and the Soviet Union.

Virtually an underground city, the nuclear-powered Camp Century featured dozens of tunnels and trenches as well as a host of buildings that could accommodate up to 200 men. While the project seemed initially successful, the ever-moving ice sheets made Camp Century untenable, forcing the US to abandon the project in 1966. 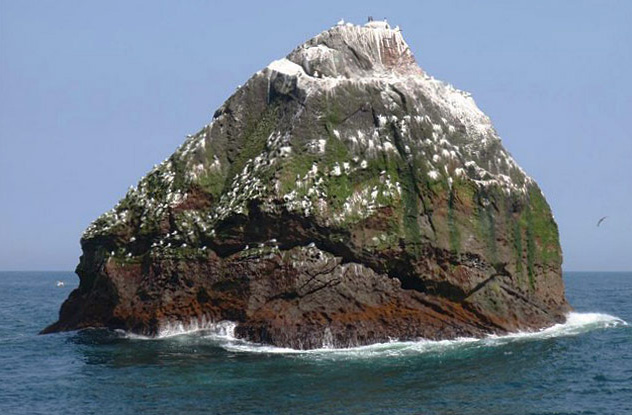 Amid the shadow of the historically more significant Falklands Islands stands the uninhabited single rock islet of Rockall. Standing at just 20 meters (70 ft) and surrounded by miles of water (it is situated roughly 500 kilometers (300 mi) away from the British Isles), Rockall nevertheless received ample attention from the British government for security reasons. Specifically, they feared the uninhabited islet could be used by spies onboard Soviet submarines as an outpost to view missile tests.

Under orders from Queen Elizabeth, a contingent of Royal Marines landed on the islet in 1955 and planted a Union Jack flag along with a plaque. Due to the size of the island, the Marines noted the difficulty in using a helicopter to land them safely. One of them, a veteran rock climber named Brian Peel, even nearly got swept away by the waves after he tried to get some seaweed samples below the islet’s waterline.

4The Soviet Union Tricked Castro Into Giving Up His Nuclear Missiles 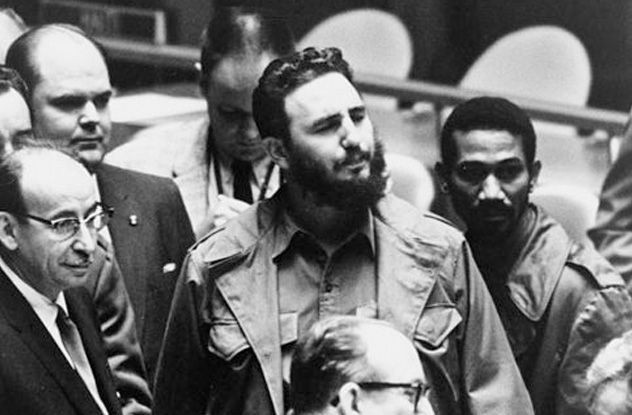 As fate would have it, the Cuban Missile Crisis didn’t end with the Soviet Union agreeing to remove its nuclear missiles from Cuba in October 1962. The true ending came on November 22, 1962 when the Soviet Union successfully tricked Fidel Castro into giving up the remaining warheads still under his control.

Soviet leader Nikita Khrushchev had contemplated letting the warheads, believed to number more than 100, stay in Cuba as a consolation to Castro, who believed the Soviet Union sold Cuba out in the negotiations. To complete the secret negotiations, he sent out First Deputy Premier Anastas Mikoyan to personally haggle with the Cuban leader. However, Mikoyan, after observing Castro’s bouts of paranoia, believed giving the missiles to a madman would be nothing short of suicide.

In the end, he told Castro how a Soviet law—which was really nonexistent—prevented the Soviet Union from providing other countries with nuclear missiles. Amazingly, Castro bought the lie and allowed the Soviets to ship the remaining warheads back home by December 1962. 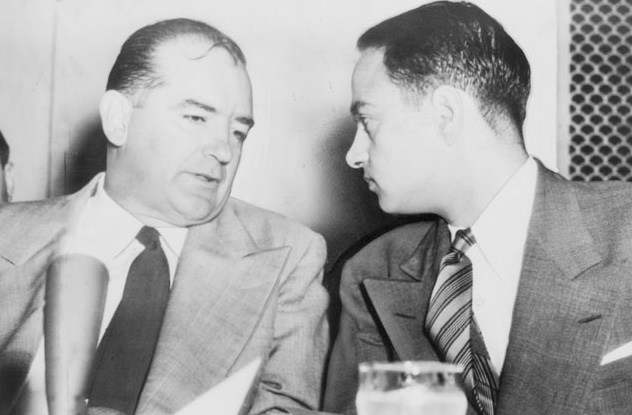 While Senator Joseph McCarthy will forever be known as the demagogue who led the communist witch hunts of the ’40s and ’50s, he’s largely forgotten for his role in the lesser-known but more devastating Lavender Scare.

In a paranoia-filled atmosphere, the government feared that gay employees sympathetic to the communist cause would be weak-willed enough to give away state secrets. The federal and state governments responded by firing hundreds of employees who had been otherwise loyal Americans. In fact, the majority of civil servants who resigned from their posts were accused not with communism but with homosexuality. McCarthy himself inextricably linked communism with homosexuality, claiming that those who opposed him must either be gay or communist.

According to historians, the Lavender Scare had two lasting effects. It forced the gay community to go underground and become social activists, and it influenced American foreign policy to become more “macho,” thereby dragging the United States toward the Vietnam War.

2The US Airdropped Tons Of Candy On Berlin

We’ve previously discussed how World War III could’ve started with Germany as the battlefield again, after the Soviet Union blockaded the Allied-held parts of Berlin to force the Allies to withdraw. Unfortunately for the Soviets, their scheme failed after the Allies conducted a massive airlift to supply blockaded areas with foodstuffs and other necessities.

In the midst of this massive operation, one US Air Force pilot named Gail Halvorsen began dropping candy bars to children near Berlin’s Tempelhof Airport after he witnessed their resolve in one prior encounter. Halvorsen, touched by the children’s appeal not to abandon them to the Soviets, promised he would lift their spirits up with candy.

Pretty soon, news of the Candy Bomber and Uncle Wiggly Wings (he wiggled the wings of his plane so the children would recognize him) reached his commanding officer, who reprimanded him for flouting regulations. However, overwhelming positive media reaction convinced airlift chief General William Tunner to let Halvorsen continue his candy drops.

Soon, “Operation Little Vittles” involved the entire Air Force dropping tons of candy donated by the American Confectioners Association. Halvorsen—who later became a hugely beloved figure in Germany—revealed how one child told him the candy drops symbolized hope more than anything for the Berliners during those dark times.

1Nikita Khrushchev And Richard Nixon Squared Off Inside An American Kitchen 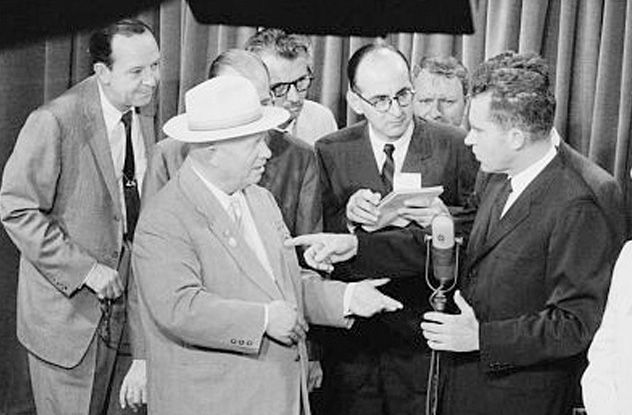 Known as the “Kitchen Debate,” Soviet Premier Nikita Khrushchev and Vice President Richard Nixon had a day-long debate on which ideology could provide a better living standard for their respective peoples. Nixon—who was in Moscow on July 24, 1959 to grace the opening of the American National Exhibition at Sokolniki Park—argued how capitalism enabled the American people (especially the working class) to easily acquire affordable yet luxurious homes. To prove his point, he toured Khrushchev inside the kitchen of an American home on display and showed him all the appliances.

Never the man to back down, Khrushchev dismissed the items and said the Soviet Union would surpass American technology in a few years’ time. He also boasted how Soviet homes were built sturdier than the American ones. Amid the gesticulations (Khrushchev even cursed during off-the-record-moments) and grandstanding, however, both men ended up agreeing focusing on kitchen appliances sounded a whole lot better than arguing about military weapons.