Usually, scientific breakthroughs require years of hard work and dedication to your field. But sometimes, all it takes is a little perseverance and a complete lack of regard for personal safety—and plain old dumb luck.

David Hahn, The 17-year-old Who Built A Backyard Nuclear Reactor

In 1994, boy scout David Hahn (who had received a scouting merit badge for atomic energy three years earlier) tried to build a nuclear reactor in his mother’s potting shed. Hahn believed the project would help him become an Eagle Scout, and his achievements included building a neutron gun, duping officials at the Nuclear Regulatory Commission into providing him with the information he needed to build a nuclear reactor, and obtaining radioactive elements like radium and thorium.

In 1998, Hahn was the subject of an article by journalist Ken Silverstein entitled “The Radioactive Boy Scout.” As Silverstein wrote, “He told me how he used coffee filters and pickle jars to handle deadly substances such as radium and nitric acid, and he sheepishly divulged the various cover stories and aliases he employed to obtain the radioactive materials.”

After the EPA found out about Hahn’s reactor, they shut down the project before it finished. By then, Hahn’s experiment was so dangerously irradiated that the town’s entire population of 40,000 was at risk. Undeterred, Hahn would later be arrested in 2007 for stealing 16 smoke detectors that he planned to harvest for more radioactive experiments. 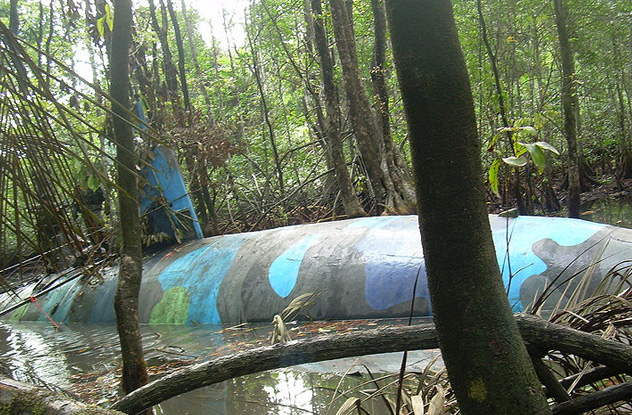 For decades, Colombian drug runners tried to evade US authorities in homemade submarines. Assembled in secret shipyards, these “subs” were wooden cigarette boats, unable to maneuver like real subs. However, in the early 2000s, intelligence agencies began hearing rumors of fully functioning supersubs being constructed in the jungles of South America. The submarines were so evasive that US law enforcement began to liken them to the Loch Ness monster. One agent said, “Never seen one before, never seized one before. But we knew it was out there.”

In 2010, the Ecuadorean Navy was able to capture one of these subs. Jay Bergman, the US Drug Enforcement Agency’s top official in South America, declared the submarine “a quantum leap in technology.” The 22-meter (74 ft) sub could hold up to 9 tons of cocaine (a street value of $250 million) and was equipped with 249 batteries that allowed the sub to travel at near invisibility for up to 18 hours before recharging.

8NASA-Quality Pictures For Less Than $800

Meet Robert Harrison
Skip to 2:30 to see some of the photos

In 2008, Robert Harrison, a 28-year-old IT Director and father of three, was able to capture NASA-quality pictures of space using only a Canon digital camera, a helium weather balloon, and a GPS. The balloon, which Harrison named Icarus I, captured images of the Earth from more than 1,600 kilometers (1,000 mi) above the surface of the planet.

The total cost of the project was only £500 ($747). The quality of the pictures was so good that NASA contacted Mr. Harrison to learn how we was able to accomplish this feat on an IT director’s salary. “People think this is something that costs millions,” he said, “but it doesn’t. You just need a bit of technical know-how. I know nothing about electronics, and what I do know, I learned from the Internet.”

Jeff “Skunk” Baxter is well known to music fans as a guitarist for the Doobie Brothers and a founding member of Steely Dan, but the self-described hippie guitarist now enjoys a second career as one of the top counterterrorism expert in the US.

While touring, Baxter began researching music technology, eventually turning his attention to weapons systems. He became a self-taught expert on the subject and even wrote a paper on missile defense. “I sat down at my Tandy 200,” he said, “and wrote this paper about how to convert the Aegis weapon system—why it would make sense to convert it to do theatre missile defense because it would be on a mobile platform and give the United States a new role in NATO in the 21st century. I have no idea. I just did it.”

After 9/11, Baxter was contacted to provide consultation on US counterterrorism efforts because of his original thinking. Congressman Dana Rohrabacher said, “Skunk didn’t grow up in the system. He hasn’t been beaten down by the system. So his very freedom of thought and his gut-level understanding of technology contributes greatly, and people know that.” Today, the former rock star chairs the Congressional Advisory Board on Missile Defense and serves as a consultant to companies like Northrop Grumman and General Atomics.

The Mpemba effect (named after its grade school founder, Erasto B. Mpemba) states that under specific circumstances, hot water freezes faster than cold water. While making ice cream with his classmates, Mpemba noticed that warm milk would freeze sooner than chilled milk. This seems counterintuitive, but Mpemba was not alone in his findings. Scientists including Aristotle, Sir Francis Bacon, and Rene Descartes made this claim as well, but none of them were ever able to prove it.

Mpemba, along with physicist Denis Osbourne, performed his own experiments and was able to achieve results that verified his hypothesis. Over the past decades, Mpemba’s results have been noted by many scientists, but no one was able to reproduce Mpemba’s results until 2010, when James Brownridge from the State University of New York at Binghamton published a study detailing reproducible results. To reproduce the Mpemba effect, Brownridge used different samples of water (one sample was distilled water, while the other was tap water).

Today, the scientific community remains divided over the Mpemba effect because of the very specific circumstances needed to reproduce the phenomenon.

5A Priest Holds The World Record For Most Supernova Discoveries 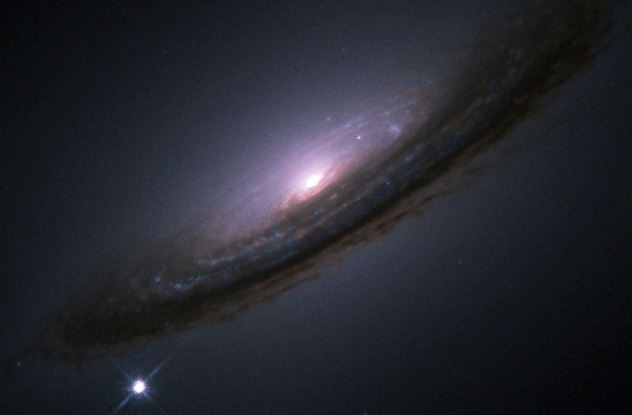 Australian priest Robert Evans likes to stare at the skies in his spare time, and he’s really good at it. Evans has committed to memory more than 1,000 galaxies, so that he can check each field quickly just by eye. Since 1981, Evans has discovered over 40 supernovae, a world record. In his 2003 book A Short History of Nearly Everything, Bill Bryson wrote that Evans’s ability to discover supernovae was like the ability to spot a single added grain on a table of salt 2 miles long.

Evans has made most of his discoveries not on an observatory-sized telescope but in his backyard. “Of the 40 visual discoveries,” he said, “10 were found with my 10-inch reflector, 18, I think, with my 16-inch, three with the 40-inch telescope at Siding Spring Observatory, and the rest with the 12-inch that I now use here at home.”

While in science class, 10-year-old Clara Lazen accidentally discovered a new explosive. Clara was playing with wooden balls and sticks used to create models of molecules when she forged a molecule using a combination of nitrogen, oxygen, and carbon.

When she showed the design to the teacher, Kenneth Boehr, he thought Clara could be onto something. Boehr took photographs of the molecule and sent the pictures to his friend Robert Zoellner, a chemistry professor from Humboldt State University. After doing some digging, Zoellner agreed that Clara had discovered a brand new molecule, tetranitratoxycarbon.

Tetranitratoxycarbon, which uses the same combination of atoms as nitroglycerin, stores large amounts of energy. If synthesized, it could create a powerful explosion.

As a result of her discovery, Clara, Boehr, and Zoellner are all listed as co-authors on a research paper about the molecule. Zoellner believes tetranitratoxycarbon could hold great importance as scientists continue to look for new ways to harvest energy.

312-Year-Old Develops His Own Theory Of Relativity

In 2011, 12-year-old genius Jacob Barnett believed he’d found holes in Einstein’s theory of relativity. Jacob, who had an IQ of 170, explained his expanded theory of relativity to his mother Kristine Barnett. Barnett, who admits to flunking high school math, asked her son to speak slowly while she filmed his explanation.

After the video was published on YouTube, Jacob’s theory drew the attention of some notable scientists. Scott Tremaine, a professor at the Institute of Advanced Study, wrote, “The theory that he’s working on involves several of the toughest problems in astrophysics and theoretical physics . . . Anyone who solves these will be in line for a Nobel Prize.” Soon after the video went viral, Jacob was being recruited for a paid research position at Indiana University–Purdue University Indianapolis.

How a Truck Driver “Rebuilt” the Atomic Bomb

Reverse engineering is the process by which scientists take a look at existing technology and then build a version of their own without any of the original plans. Militaries do this all of the time, but when a truck driver with no college education begins to build an atomic bomb, it raises a few eyebrows.

Over the course of 10 years, former truck driver John Coster-Mullen analyzed pictures and interviewed over 150 scientists and engineers who were involved with the Manhattan Project. The scientists were more than happy to indulge the guy trying to develop his own nuclear problem. The result was a bomb that received “rave reviews” from the National Defense Council. Ironically, the National Defense council are the exact people paid to stop this sort of thing from happening.

When asked about his achievement, Coster-Mullen replied, “The secret of the atomic bomb is how easy they are to make.”

The Madman and the Cathedral | Future Shorts

Justo Gallego Martinez, a Spanish monk, has built an entire cathedral out of salvaged materials, including bricks found in local factories. While the design is loosely based on St. Peter’s Cathedral, it also incorporates design elements from European castles, churches, and even the White House.

Justo has no formal designs or engineering plans. In fact, he has no engineering or architectural knowledge at all.

After retiring from farming, Justo became a Benedictine monk, but tuberculosis forced him to leave the monastery. During this period of illness, Justo prayed to the Lady of the Pillar (the name given to the Virgin Mary after her appearance in Zaragoza, Spain). He promised himself that if he survived the disease, he would build a church dedicated to her. After he recovered from his illness, Justo didn’t let his lack of experience stop him from fulfilling his promise.