Although thousands, even millions, of photographs were taken during World War II, only a handful ever became popular. But sometimes it’s the little-known photographs that reveal to us the cruelty and uncertainty the war brought upon humanity. 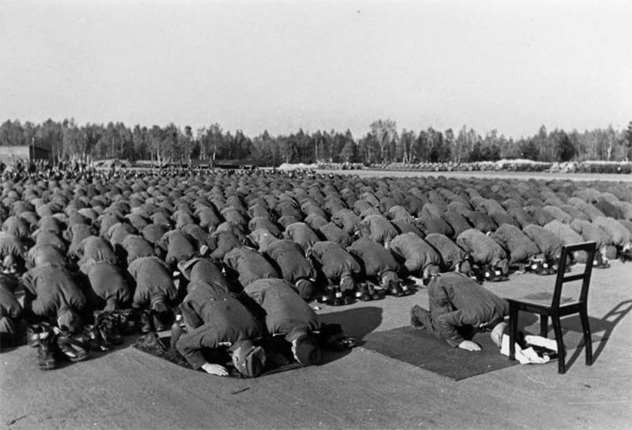 The image above is that of German Nazi-era Muslim soldiers in prayer. They are from the German 13th Waffen-Gebirgs-Division der SS Handschar, a full Muslim division of the German army. The unit, which mostly consisted of Bosnian Muslims, was formed in March 1943 after Germany conquered Croatia, which included Bosnia-Herzegovina. The Bosnian Muslims were accepted into the Nazi ranks because of Heinrich Himmler’s belief that the people of Croatia were of Aryan descent, not Slavic. The Nazis also believed that the new division would help them win the support of most Muslims around the world. In time, the division also included Croatian Roman Catholics, who formed 10 percent of its ranks.

The unit was Grand Mufti Hajj Amin al Husseni’s initiative. Hajj Amin al Husseni had led a failed coup in Iraq and had been exiled to Italy and then Berlin, Germany, where he encouraged Bosnian Muslims to join the ranks of the German army. Husseni encouraged the killings of Jews in North Africa and Palestine. He also wanted the Luftwaffe to bomb Tel Aviv. After the war, Husseni fled to France, where he was arrested. He later escaped and fled to Egypt, where the Allies were discouraged from re-arresting him because of his status in the Arab world.

9Shaving The Hair Of French Women 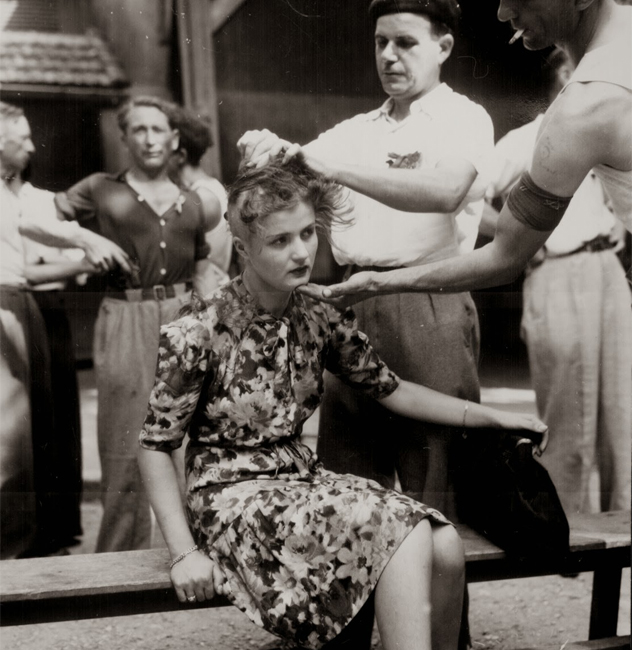 After France was liberated toward the end of World War II, French citizens who had supported the invading German troops in any form were tracked down and had their heads forcefully shaved as a badge of dishonor. The photograph shown above is that of a woman whose head was being shaved in Montelimer, France, on August 29, 1944. As many as 20,000 French citizens had their heads shaved in public, the majority of which were women. The punishment was often carried out by locals or members of the French Resistance and was done everywhere from the homes of the victims to public squares in the presence of a cheering crowd.

During the same period, Germany also decreed that women who had sexual relations with non-Aryans or prisoners of war should have their heads shaved. Shaving the hair of women seen as fugitives didn’t get its start during World War II—it’s also recorded to have been done in Europe during the Middle Ages, when it was used as punishment for adulterous women.

8Raising A Flag Over The Reichstag 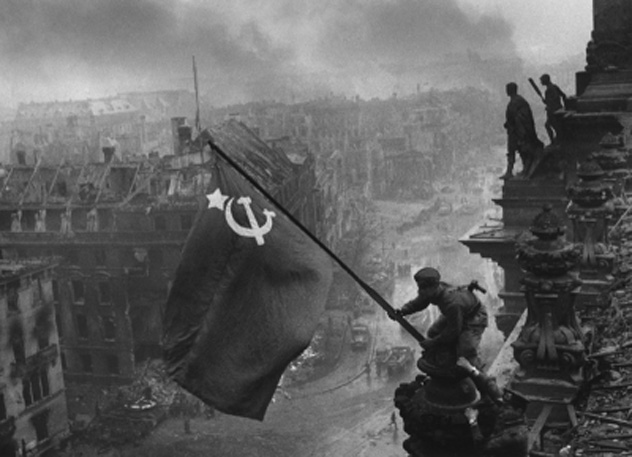 Raising a flag over the Reichstag would have been the Russian equivalent of Raising the Flag on Iwo Jima except that it was staged, a fact which its photographer, Yevgeny Khaldei, confirmed. The photograph shows a young Russian soldier raising the Soviet flag over Berlin after the defeat of the German army.

Yevgeny Khaldei was in Moscow when the Soviet army overran Berlin, but he quickly left for Berlin on the orders of top Soviet officials, possibly Joseph Stalin himself. His orders were to produce images that depicted the Soviet victory in Germany. Yevgeny got to Berlin and inspected several locations, including Tempelhof Airport and the Brandenburg Gate, before settling for the Reichstag building. Yevgeny took 36 different shots of the scene, which was to be used for Soviet propaganda. Interestingly, a Soviet army unit had initially hoisted its flag on the building not long after the town was captured, but that scenario had gone unrecorded.

7The Weeping Woman Of Sudetenland 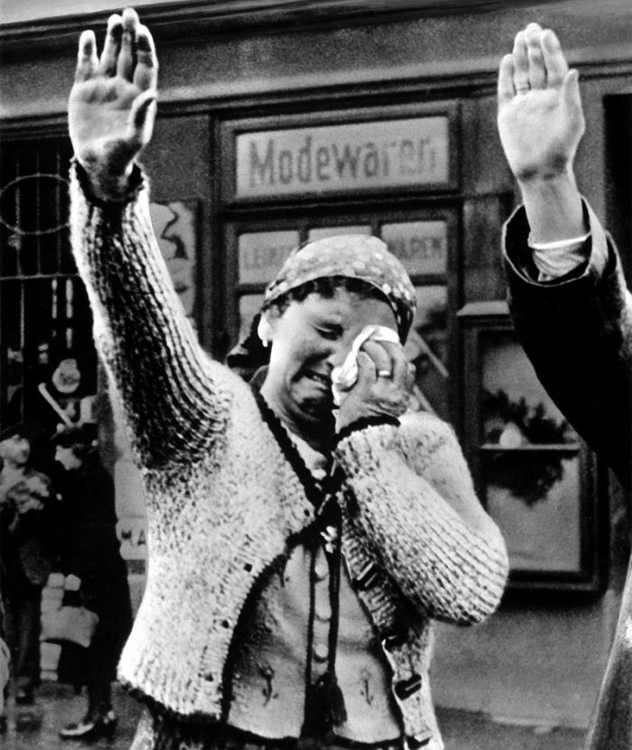 This photo of a weeping Sudeten woman is one of the most controversial photographs of World War II. It was also a propaganda tool used by both the Allies and the Nazis. The photograph was taken in Sudetenland, Czechoslovakia, in October 1938 after the city was captured and annexed by Germany just before World War II officially began. The photograph shows a weeping Sudeten woman raising one of her arms to salute the invading German troops while the other hand holds a handkerchief over one of her tear-filled eyes. 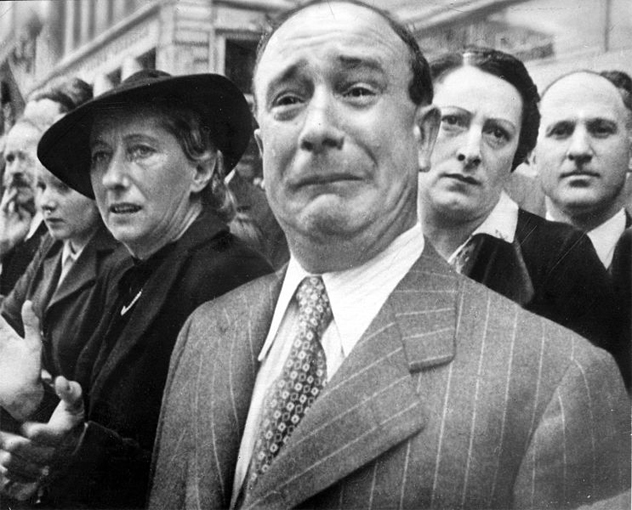 In the summer of 1940, German soldiers rolled into Paris, marking the defeat of France and the beginning of “Les Annee Noires” also known as “The Dark Years.” By the time the German soldiers began moving in, the French government had already abandoned the city and fled to Bordeaux in southern France, which was their last stronghold. The exact date the picture was taken is disputed. While it originally appeared in 1941, it is believed to have been taken in 1940. The man in the picture is believed to be Monsieur Jerome Barrett, who was crying as the flags of France made their way through Marseilles on their way to Africa.

The defeat of France during World War II was shocking as well as disappointing. Prior to the war, it was believed that France had the best army in the whole of Europe. After France fell to Germany, Adolf Hitler insisted that the documents to acknowledge the surrender of France must be signed in the Compiegne Forest, inside the same railroad car Germany had signed the documents of its own surrender in at the end of World War I. The railroad car was already in a museum, but it was removed and taken to the forest so the documents could be signed. 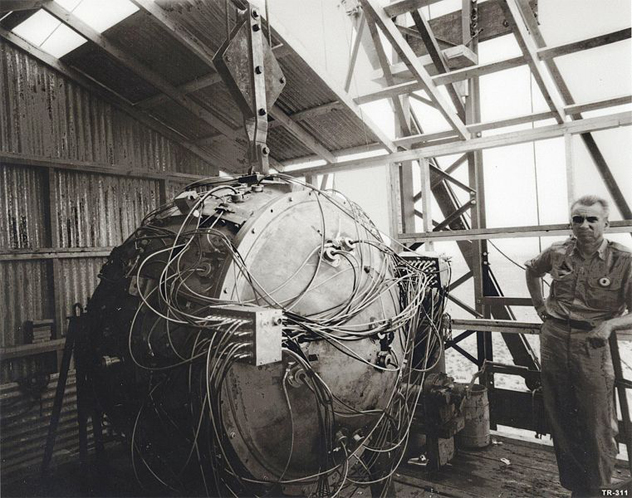 The atomic bombs that went off over Hiroshima and Nagasaki are sometimes said to be the first nuclear weapons. Actually, the two bombs weren’t the first—they were just the first nuclear weapons deployed to kill and destroy. The first atomic bomb ever made was the Gadget (photograph above). It was completed and tested weeks before two other atomic bombs went off over Hiroshima and Nagasaki. The test, called Trinity, was carried out at the Alamogordo Bombing and Gunnery Range, known today as White Sands Missile Range, in New Mexico.

The bomb was placed on a forest service watchtower 30 meters (100 ft) tall. Three bunkers were constructed 9,000 meters (29,000 ft) away from the tower so that the impending explosion could be observed. In the early hours of July 16, 1945, the Gadget went off. The resulting explosion sent shock waves through the desert, vaporizing the tower and producing a gigantic mushroom cloud 12,000 meters (40,000 ft) high. It produced a flash brighter than 10 Suns. The flash was so bright that it was seen in all of New Mexico and parts of Arizona, Texas, and Mexico. The heat produced was so severe that observers 16 kilometers (10 mi) away compared it to standing in front of a “roaring” fireplace. 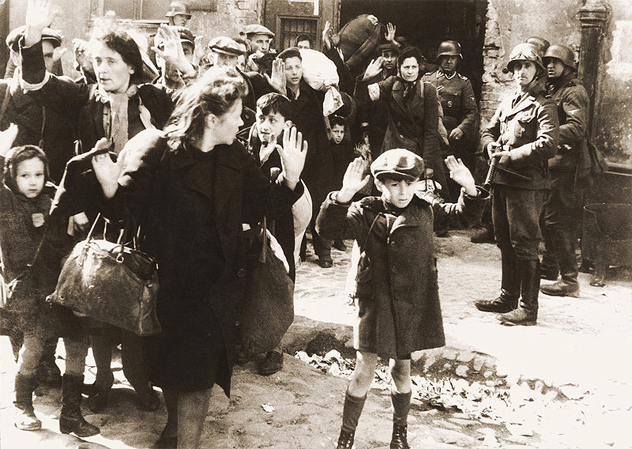 We’ve already talked about the Warsaw Ghetto Uprising, when Jews in Warsaw, Poland, launched a 10-day revolt against German soldiers. The Jews knew quite well that they would be defeated, but they didn’t want to give up without a fight. “The Warsaw ghetto boy” is the name given to a young Jewish boy, not more than 10 years old, who was arrested by German soldiers in the ghetto after the uprising had been crushed. The unidentified boy’s hands were raised in the air while a German soldier pointed a machine gun at him. Although the photograph is one of the most circulated images of the Holocaust, no one knows who the boy is or what happened to him.

Some sources say he was gassed to death at Treblinka camp, while others say he survived. In 1999, a man named Avrahim Zeilinwarger contacted an Israeli museum saying that the boy was his son, Levi Zeilinwarger, who was gassed to death in a concentration camp in 1943. In 1978, an unnamed man contacted the Jewish Chronicle saying that the boy was his son. In 1977, a woman named Jadwiga Piesecka claimed that the boy was Artur Dab Siemiatek, who was born in 1935. In 1982, a New York ear, nose, and throat specialist claimed that he could be the boy, although he himself doubted it. While he was arrested in Warsaw, he had never been to the ghetto. Besides, he was arrested on July 13, 1943, months after the picture is said to have been taken.

3The Prisoner Of War Olympics 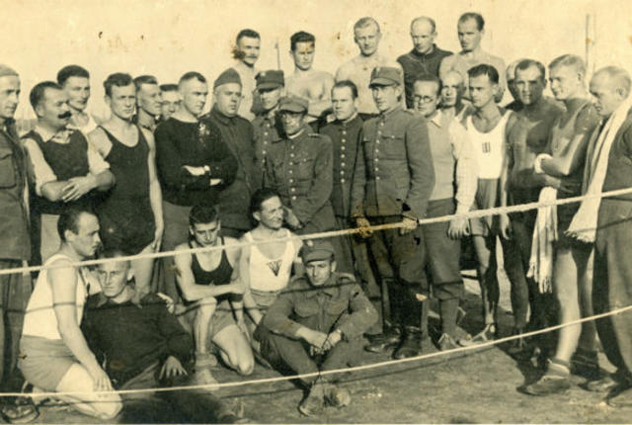 Because of the ongoing war, the Olympic Games of 1940 and 1944, slated for Tokyo and London, could not be held. However, several POW camps in Poland went ahead with their own Olympics, both in 1940 and 1944. While many of the events were held in secret, the 1944 Woldenberg Olympics, held at the camp in Woldenberg, and another held at the camp in Gross Born (both in Poland), were held on a much larger scale.

About 369 out of the 7,000 prisoners at the Woldenberg camp participated in several games, including handball, basketball, and boxing. Fencing, archery, pole vaulting, and javelin were not allowed. The flags for the games were made with excess bedsheets which even the German guards saluted. Winners of sporting events were given medals made out of cardboard. The 1944 Olympics was held because the Polish soldiers wanted to remain fit and, at the same time, honor Janusz Kusocinski, a Polish athlete who won the 10,000-meter race in the 1932 Olympics.

2The Sinking Of HMAS Armidale 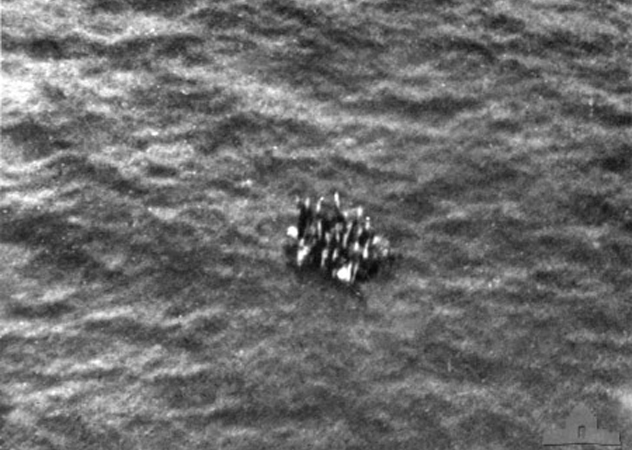 The HMAS Armidale was a corvette (although it was originally built to be a minesweeper) in service of the Australian navy during World War II. It was commissioned on June 11, 1942, only to be sunk in November that same year. While on a mission to evacuate soldiers and civilians from Betano Bay, Timor, the HMAS Armidale was spotted by Japanese airplanes, which proceeded to attack it along with its sister ship, HMAS Castlemaine. Armidale was soon destroyed by the attacking Japanese airplanes, forcing its crewmen to abandon ship. Twenty-one crewmen, including the captain, climbed onto a small, damaged motorboat, where they awaited rescue. When the rescue never came, they began rowing toward Australian waters.

Two days later, another 29 survivors began a similar journey on a badly damaged whaler that wouldn’t stop taking water. The survivors clung to a floating raft (shown in the photograph above) while awaiting rescue. After several days out at sea, the men on the motorboat were rescued along with those on the whaler. But the men hanging on the raft were never found.

The photograph shown above was taken by the pilot of a Hudson reconnaissance airplane, who even dropped a message for them saying that their rescuers were on the way. 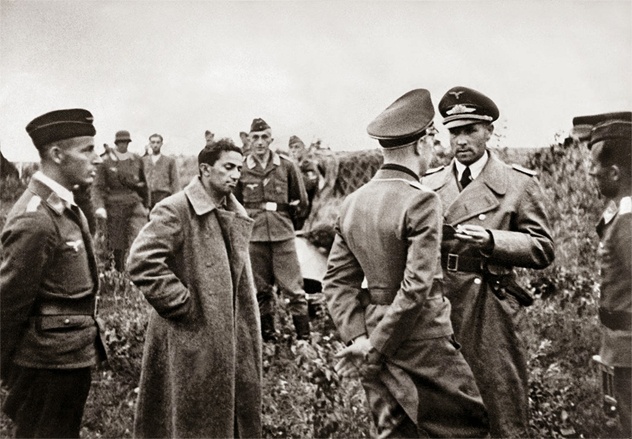 The man with his hands in his pocket in the photograph above is Yakov Dzhugashvili, the first son of Josef Stalin. The picture was taken after Yakov was captured by German troops during World War II. Yakov and Stalin were not on good terms long before the war began. Stalin often insulted him and even disowned him. He also barred Yakov from changing his surname to Stalin after he changed his.

When the Germans realized that Yakov was Stalin’s son, they took his photograph for propaganda purposes. On the back of the propaganda photographs was a short note urging Soviet soldiers to surrender just like Stalin’s son. When the Germans asked to swap Yakov with a captured German field marshal, Stalin told them off, saying that he did not swap lieutenants with field marshals. Even with his hatred and public lashing of his son, Stalin actually attempted to rescue him twice.

Yakov died at the Sachsenhausen concentration camp in April 1943 under mysterious circumstances. While declassified archives reveal that he was shot for failing to follow orders, others say he committed suicide by walking into an electrified fence. Another report said that he was killed in action in 1945.