The world is full of unpleasant people. Groups like ISIS and the Taliban and Colombia’s FARC seem to take obscene pleasure in outdoing one another in the awfulness stakes, and they’re just the tip of the villain iceberg. But not every bad guy is on 24/7. Just occasionally, even the worst groups manage to get it together to do something truly awesome. 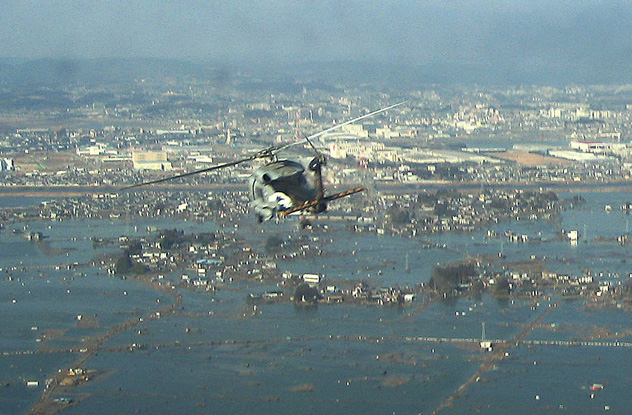 The Japanese answer to the Cosa Nostra, the Yakuza are best known for acts like extortion and distributing illegal pornography. But there’s another side to the notorious crime network. In times of crisis, they’re one of the most reliable aid agencies on Earth.

In the aftermath of the devastating 2011 Japanese earthquake, the Yakuza were one of the very first responders. Within days, they were dispatching trucks filled with food, water, and blankets to the affected corners of the country. By the time two weeks had passed, they’d donated gifts worth over $500,000. Rather than this being some insane PR stunt or means of buying protection, they really meant it.

According to the gangsters’ ninkyo code, others should never be left to suffer (presumably, their own victims don’t count). In times of national disaster, Yakuza gangs follow this code to the letter. During the 1995 Kobe earthquake, they were the first to get supplies to victims. They’re even notoriously shy about publicizing their donations, refusing to talk to the press.

Their intentions are so honorable that even crime reporter Atsushi Mizoguchi has praised them. Since he’s previously been attacked and stabbed twice by Yakuza, that’s no small feat. 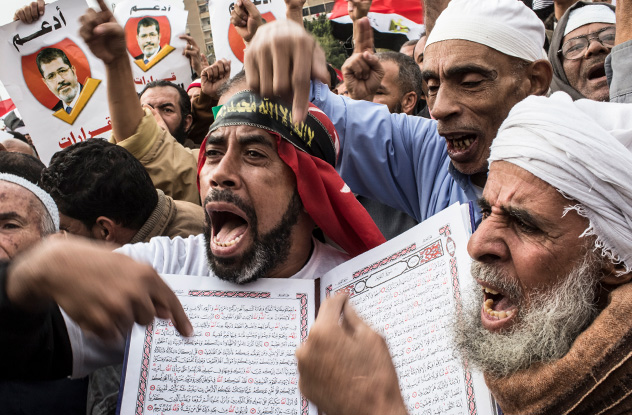 Before they became a persecuted minority in turn, Egypt’s Muslim Brotherhood were pretty good at doing the persecuting. In 2013, they attacked dozens of Coptic churches, brutally murdering Christians. It was the culmination of decades of rivalry between the two groups. This rivalry was bizarrely interrupted in 2011 when the Muslim Brotherhood flocked to save the same churches they’d later attack.

In 2010, a suicide bombing had killed 20 people gathered outside a Coptic church for a New Year’s service. A few days later, six Christians and a Muslim were shot dead outside a different church. In the uneasy atmosphere of post-revolutionary Egypt, many feared a wave of similar attacks, particularly since Copts had been a frequent target during the violence. The Muslim Brotherhood responded by forming committees across the country to protect the churches over the holiday period.

The show of goodwill couldn’t last. A couple of months later, the two groups were at each other’s throats again. But just for a moment, even Egypt’s hard-line Islamists seemed to get a tiny sprinkle of festive cheer.

After a shoot-out between rival gangs killed nine people in May, bikers are at an all-time PR low. Yet there’s one terrifying biker gang doing good on the streets of America. The BACA club is dedicated to saving children from abusers.

Founded in the 1990s by a licensed clinical social worker known as “Chief,” Bikers Against Child Abuse has one motto: “No child deserves to live in fear.” Their first case involved a young boy who had been so horribly abused that he refused to leave the house. When Chief noticed the kid was interested in motorcycles, he immediately summoned 20 leather-clad bikers to help coax him out and protect him from harm.

Jump forward two decades, and the group now offers round-the-clock protection to any abused kid who feels they need it. When suspected molester Johnell Carter escaped from prison in 2015, BACA immediately drove over to the house his victim lived in and spent all night outside, just daring Carter to try something. According to one Florida broadcaster, the local chapter has helped out in roughly 100 child abuse cases.

Baltimore Bloods, Crips: We Don’t Need Police, We Protect Our Own

When three of Baltimore’s notorious gangs, including the Bloods and Crips, declared they were joining forces during the recent riots, law enforcement got worried. Was this a plot to kill cops? A plot to use the riots as cover for unprecedented carnage?

Not quite. The gangs had joined forces to stop the violence and promote peace.

It sounds like the sort of fake story anyone should be able to see through, but they really meant it. When the city began to go up in flames, members of the Nation of Islam got in contact with local gangs, asking them to help protest against the riots. After fraught negotiations, the Crips and Bloods finally agreed, with the Black Guerrilla Family joining in later. They joined protests and produced videos calling on rioters to stop the violence.

Nation of Islam themselves went even further. Despite being listed by the Southern Poverty Law Center as a hate group, they stepped into neighborhoods and personally pulled people from burning buildings.

6The Terror Group That Stopped A Civil War 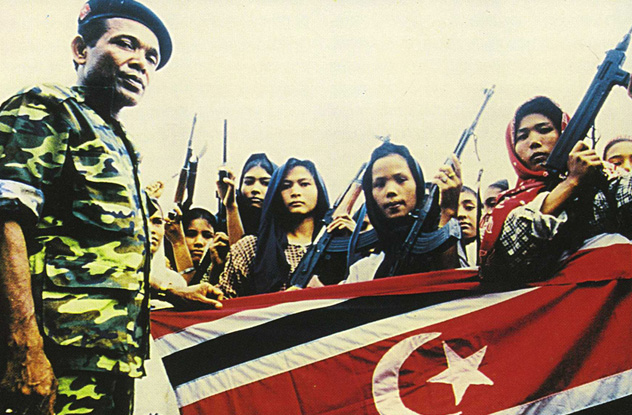 Photo credit: Ministry of Defense of the Republic of Indonesia

For nearly 30 years, the Free Aceh Movement (GAM) waged a brutal insurgency in Indonesia. Starting in 1976, they began a spree of assassinations that eventually killed 15,000. By 2004, things were looking desperate in the tiny province. Then the Indonesian tsunami hit, 230,000 people died, and entire regions were devastated, including Aceh. Faced with this humanitarian catastrophe, GAM suddenly had a change of heart.

Against all expectations, GAM responded to the crisis by dropping arms and turning to relief efforts. This completely caught the Indonesian military off-guard. In similarly war-torn Sri Lanka, the tsunami caused the fighting to intensify. Yet here GAM were, helping people rebuild their homes. Even better, they never properly returned to terrorism.

Thanks to the cease-fire, the Indonesian government was able to begin negotiations. This eventually led to GAM disarming and Aceh being declared a special province, saving countless lives. As a silver lining to a terrible disaster, that’s pretty hard to beat. 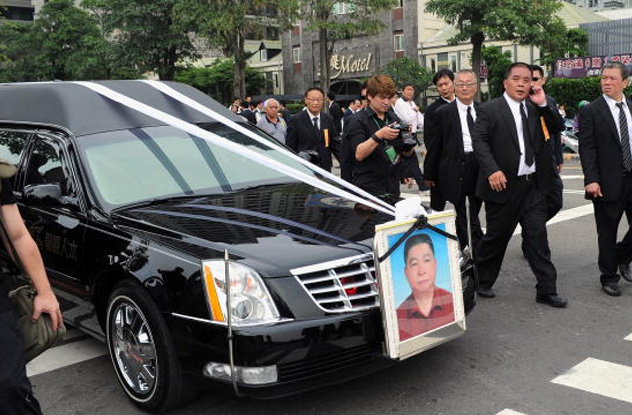 Lee Chao-hsiung’s death in 2010 marked the end of an era. The old-school mafia boss had come up from poverty, refused to let his gang deal with the sex trade, and abhorred kidnapping, and he was one of the last of his kind. So it seems fitting that his last act was spectacularly at odds with our image of Taiwan’s vicious mafia. On his deathbed, Mr. Lee requested a large chunk of his fortune be given to charity.

The total amount left by Mr. Lee was some 60 million Taiwanese dollars (US $2 million). Mr. Lee specifically asked for disabled people, families on low incomes, and religious charities to be the main recipients of his money.

Mr. Lee’s contributions didn’t go unnoticed by the country at large. His funeral was attended by dozens of prominent politicians and local leaders, making it a fitting send-off for the last embodiment of the gentlemanly era of Taiwanese gangsters.

They’re vicious killers responsible for more American deaths than some minor wars. They’ve terrorized the Middle East with bombings, executions, and assassinations. But there’s one area where they desperately tried to make the world a better place. In 2011, US forces seized a document from Osama bin Laden’s compound that shows his organization was deeply concerned about climate change.

In the internal memo, thought to be addressed to former Al-Qaeda official Atiyah Abd Al-Rahman, members are urged not to cut down trees on a large scale for fear of exacerbating global warming. Another document from around the same time asks all supporters to contribute to relief work in areas affected by climate change. However, it does then go on to suggest victims shouldn’t be helped if they are Christian or Hindu.

Even bin Laden himself was concerned for the planet’s future. In 2010, he released a tape detailing his step-by-step guidelines for governments to combat the effects of climate change, including setting up a global relief task force and investing in agriculture. Weirdly, no one seemed interested in taking him on as an adviser.

Under Pablo Escobar, Colombia’s Medellin Cartel became one of the deadliest organizations on Earth. They killed thousands, deliberately targeted women and children, and once bombed a full airliner in an attempt to kill a single man (who turned out not to be onboard). Yet even these psychopaths occasionally did good, such as the time they saved hundreds of Medellin’s poorest citizens from homelessness.

In the early 1980s, Medellin had thousands of homeless, some of whom eked out a living scavenging on garbage dumps. When the city removed one dump, its residents were left without anything. In a bizarrely magnanimous gesture, Escobar and his cartel built them an entire neighborhood. Known as Barrio Pablo Escobar, it still bears his name today.

That wasn’t the cartel’s only charitable act. They poured money into the upkeep of public parks and even built a local zoo. Their actions earned Escobar an enduring Robin Hood status in parts of Colombia, though just as many remember him chiefly for being a murderous thug.

Formed after the Provisional IRA disarmed in 1997, the Real IRA have a bloody track record. In 1998, they bombed the town of Omagh, killing 29 and injuring 220. They’ve since splintered, leaving only a tiny group who still uses the name but nonetheless represents a continued threat in Ireland. Yet their goals aren’t always antithetical to those of the police. Over the last few years, the terror group has come out as strongly anti-drugs.

Using their fearsome reputation, a Londonderry wing of the group known as RAAD (Republican Action Against Drugs) have been scaring drug dealers out of their city. Although their methods are brutal (including shooting people in the elbows, knees, and ankles), they claim they don’t target addicts and are only interested in hurting those who’ve sold to “children or vulnerable people.” In an interview with Vice News, a former dealer even said they’d been fair-minded enough to give him two warnings before trying to kill him.

Not everyone’s convinced. Some claim non-dealers have been targeted and innocent people killed in botched hits.

The year 1989 saw the hope of democracy die an awful death in China. After weeks of peaceful protests, the army stormed Tiananmen Square, killing hundreds. Student demonstrators suddenly found themselves on the Communist Party’s most wanted list. Without outside help, they’d be tortured, disappeared, or murdered. Luckily, someone was on hand to supply that help: China’s terrifying Triads.

The connection came via the Hong Kong Democratic Alliance. Armed with the funds to save the fleeing protesters, they made contact with shadowy underworld figure Brother Six. An associate of the Triads, Six had the connections and influence to make their rescue operation happen.

In the coming weeks, Six and his Triad friends managed to spirit 133 people out of China, including the second-most-wanted protester and the half-brother of artist Ai Weiwei. Although they were eventually caught and shut down by the state, they saved dozens of people from a horrendous fate at the hands of China’s security forces.