Woodpeckers are the construction workers of the bird world. While other species weave nests from grass and sticks, woodpeckers hammer right into the thickest trees to hollow out wood for their nests, find wood-boring prey, and release sap flows.

But these birds don’t need safety helmets and goggles to protect them from hard knocks on the noggin and flying wood chips in their eyes. They have their own cool ways of avoiding brain damage and blindness.

Woodpeckers Pt.1 – Why They Don’t Get Brain Damage

Woodpeckers have a life of hard knocks—literally. Like a human repeatedly running face-first into a tree at full speed, a woodpecker can hit a tree trunk 100 times per minute at rates of up to 24 kilometers per hour (15 mph). While a human would probably end up in the hospital after the first hit, a woodpecker survives undamaged through repeated blows, an average of 12,000 per day, and may live for over 10 years.

The deceleration forces from such repeated impacts reach an incredible 1,000 G and place extraordinary stresses upon the neck, skeleton, and face of these birds. Understandably, scientists want to know how woodpeckers avoid brain damage. It’s more than just a strong skull. So far, researchers have identified three distinct factors that allow a woodpecker to withstand constant blows to the head: powerful neck muscles, a flexible spine, and a tongue that wraps around the skull.

Scientists at the Hong Kong Polytechnic University observed slow-motion footage of woodpeckers, assessed their skulls, and created computer simulations to understand exactly what happens when a woodpecker strikes a tree. The supportive bone looping around the skull, known as the “hyoid,” acts as a safety belt to prevent brain damage, while the upper and lower bills are of different lengths, lessening the transmission of forces.

Finally, certain bones of the skull have spongy, plate-like structures that distribute incoming forces and reduce any stress that would otherwise be placed on the brain. All in all, the head and neck of a woodpecker work together to keep the bird in top shape despite its lifestyle. 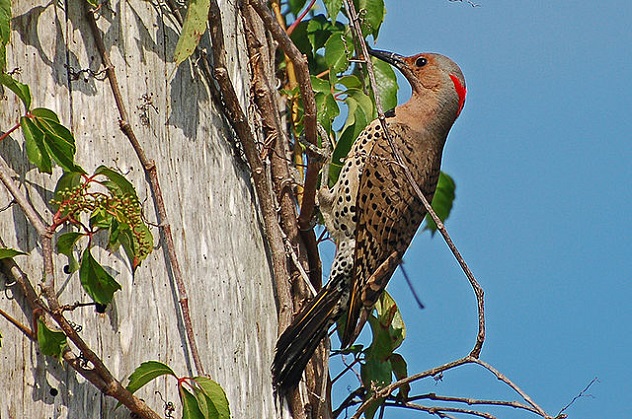 Woodpeckers have exceptional physical resilience and tree-climbing abilities. Specially adapted to handle life on a tree trunk, the tail of a woodpecker has sharp spikes that dig into the bark of a tree. As the woodpecker holds on with its unique claws, the tail acts as a third leg, or “kickstand,” to keep the bird anchored.

When a woodpecker forcefully hammers on a tree to find insects or dig out a new nesting site, it can rely on its spiked tail to create a tripod, giving it leverage and stability. The spikes work with the bird’s specially adapted claws to allow a woodpecker to grip a tree trunk firmly or climb it quickly and easily. This keeps the bird from falling off the tree, no matter how awkward its position or how jarring the forces as it hammers away.

A woodpecker’s tail is especially dramatic when fanned out, with many sharp points at the end that are much different than the broad feathers further up the tail.

Through the Lens: Acorn Woodpecker

Most woodpeckers hammer away at trees to remove insects or create nest sites, but the acorn woodpecker of the western US, Mexico, and Central America is a noteworthy exception. Looking like a clown with its wide eyes and colorful feathers, this bird is unusually hard working, with a rich social life based on hoarding and mating. Acorn woodpeckers eat and breed as a group, with many birds tending to one nest at a time during mating season.

Creating hundreds of holes in oak trees in their permanent territory, these woodpeckers stash acorns into miniature cavities in the wood. The birds defend their acorn trees, or “granaries,” as a group because they depend so much on acorns for survival. When needed for food, the acorns are hammered out of the tree, which may look like it’s riddled with bullet holes from the huge number of acorns stored there. In one case, a stucco house was used as a cache by acorn woodpeckers, making the doorframe look like the scene of a drive-by shooting.

Most woodpeckers are named after their abilities to hammer on trees while extracting insects, drawing sap, or creating nests. That’s why the ground woodpecker’s name seems to be wrong. With its ghostly yellow eyes, earth-toned feathers, and reddish highlights to match the rocks and soil, the ground woodpecker mainly finds food by pecking at the earth, not wood. These birds are found exclusively in South Africa, Swaziland, and Lesotho. They live in the barren upland areas that have rocky slopes, grasses, and boulder fields.

As the largest woodpecker in these areas, the 30-centimeter (1 ft) ground woodpecker (Geocolaptes olivaceus) searches among rocks and open areas to find its highly specialized diet of ants. Although ants provide almost all the food needed, ground woodpeckers also eat termites and other insects. The woodpecker’s long, retractable, sticky tongue can work its way into tight spots and easily drag out hiding insects.

Working together, both male and female ground woodpeckers use their powerful bills to dig tunnels and egg chambers into earthen banks for their nests. After the eggs hatch, both sexes feed regurgitated insects to their chicks. 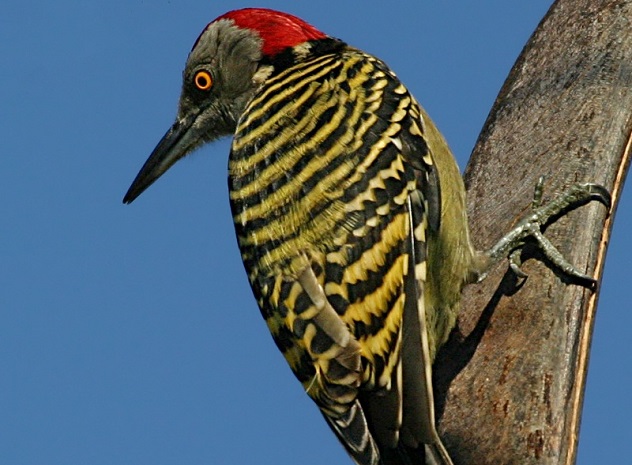 Despite having the power to fly, most birds can’t hop up a tree. With three toes pointing forward and one pointing back, songbirds have “anisodactyl” feet, which are made to walk, wade, swim, or perch in a branch. They’re especially helpful when perching because the foot muscles tighten in a way that prevents the bird from falling, even when asleep.

Although the toe arrangement is different in woodpeckers, their feet are designed to prevent them from falling, too. Unlike songbirds, woodpeckers have a “zygodactyl” toe arrangement, with two toes pointing forward and two backward in a mirror image. As a woodpecker grasps the bark of a tree with its sharp toes and moves upward in a hopping fashion, the spikes on its stiff tail provide additional support to keep the bird from falling. Having two toes in back and a spiked tail also anchors the bird as it hammers against a tree with its powerful bill. 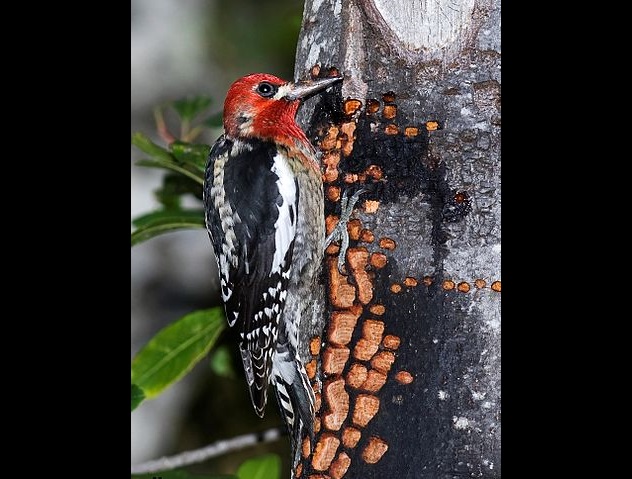 In North American woodlands, four species of woodpecker—the Williamson’s, yellow-bellied, red-naped, and red-breasted sapsuckers—drill tiny holes in the trunks of certain trees to extract sap and eat insects attracted by the sap. These woodpeckers have developed a partnership with hummingbirds that benefits both of them. As sapsuckers drill holes to extract sap, hummingbirds follow them from tree to tree to eat there, too.

For their part, the hummingbirds chase off larger birds that try to feast at the sapsuckers’ holes, preserving the food for both of them. Even though many birds love sap, most don’t have the right type of beak to drill for it themselves.

Hummingbirds need the nutrients from nectar to survive. However, as they fly north during the spring, cold spells can delay the blooming of flowers and cause a shortage of nectar for the hummingbirds. Sapwells are a good alternative food source because the composition of sap is similar to nectar. Like nectar, sap is filled with nutrients, including sugars, minerals, and amino acids.

These woodpeckers only drill for sap during the spring and summer. When the sap runs dry, they eat insects, nuts, and fruits instead. 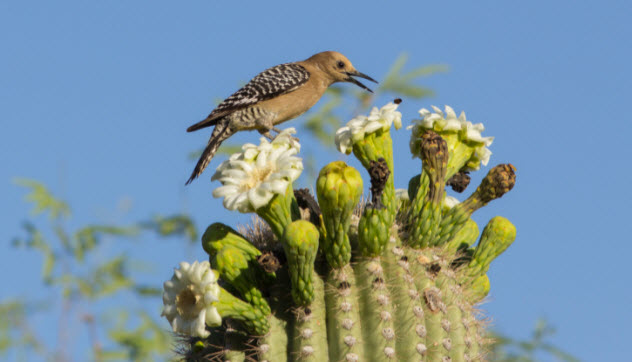 Native to desert and surrounding habitats in the southwestern US and Mexico, Gila woodpeckers use saguaros—giant, tree-like cacti that may reach 13 meters (43 ft) in height and 3 meters (10 ft) in circumference—for food and shelter. A little over 25 centimeters (10 in) long, these birds are mostly brown, with a striking checkered back and red facial accents. In addition to insects, they eat cactus fruits and berries.

Equipped with a thick bill, the Gila woodpecker plays an important role in maintaining the health of saguaros by removing insects and trimming damaged tissue, which heals the cacti.

These birds excavate new nest sites every year. After Gila woodpeckers abandon their nests, elf owls, rodents, reptiles, and other animals may use these cavities to breed. As humans have encroached on their desert habitat, Gila woodpeckers have adapted, at times lapping up nectar from feeders that were intended for use by hummingbirds.

Woodpeckers Pt. 2 – How They Can Climb Trees – How To Tell Hairy and Downy Woodpeckers Apart

In addition to tails that act as braces and reinforced, shock-absorbing skulls, woodpeckers have bristles or soft feathers placed around their nostrils to protect them from nasal damage. Special air sacs also filter dust away from the birds’ nostrils. These features are particularly helpful when woodpeckers drill holes in trees because they generate a lot of sawdust and flying wood debris close to their heads.

The smallest North American woodpecker, the 15-centimeter (6 in) long downy woodpecker, has the most prominent and proportionally largest nasal bristles. A pretty black-and-white bird, only the male has a patch of red on the back of his head. Downy woodpeckers can be found all through the US, from Florida to Alaska.

All woodpeckers have another feature to protect their eyes from flying wood chips as they drill holes in trees. A translucent third eyelid, called a “nictitating membrane,” closes just before a woodpecker hits the wood with its bill. The bird can see through this eyelid, which also cleans the eye as it moves over the eyeball. 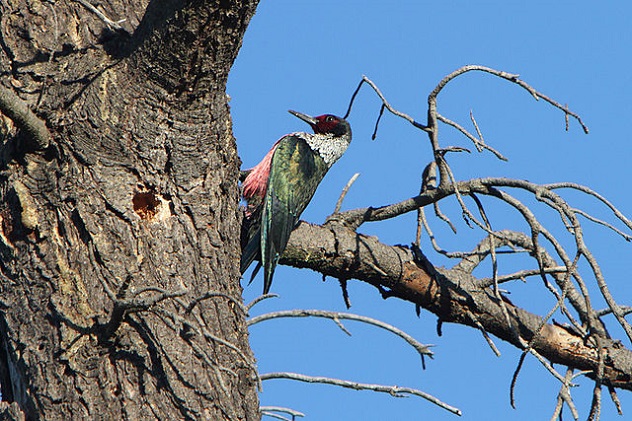 Discovered during the Lewis and Clark Expedition, the first exploration of the western US in the early 1800s, the dark, iridescent Lewis’s woodpecker stands out as a noteworthy oddity among woodpeckers. Native to open country and parkland with pine or oak trees, the Lewis’s woodpecker does have boring skills, but mainly uses them to make holes in which to live. It doesn’t normally peck at wood to feed on boring insects.

Instead, the Lewis’s woodpecker may eat insects off the surface of a tree but more often watches from a dead tree or pole before flying out to catch airborne insects for food. In autumn and winter, these birds eat acorns, fruit, seeds, and other nuts.

One of the largest woodpeckers in the US at about 28 centimeters (11 in) long, the Lewis’s woodpecker is better at flying than most woodpeckers. Its excellent gliding ability and slower wingbeats make it look more like a crow in flight than another woodpecker.

Among other strange traits, the Eurasian wryneck twists its neck, hisses like a snake, and has a scientific name, Jynx torquilla, which refers to sorcery and witchcraft as though the bird can put a jinx on someone. The two species of wryneck have strange mottled feathers and a small size that’s more like a sparrow than a woodpecker. Their diets consist almost entirely of ants. A large gland underneath the wryneck’s bill secretes thick mucus to snare prey.

Nesting in an open woodland environment and feeding frequently on the ground, a wryneck will twist its head an incredible 180 degrees when threatened, face its adversary, and emit a startling snakelike hiss. This spooky defense led to the perception that a curse was being placed on the offending party, leading practitioners of witchcraft to invoke this bird when casting certain spells. Now declining in number due to habitat loss, the Eurasian wryneck migrates to Africa in the winter.

Christopher Stephens is a researcher and writer based in British Columbia, Canada. He completed his M.Sc. in Environment and Management and enjoys writing about health, science, and environmental studies. An experienced naturalist, he leads world-class birdwatching tours for Pacific Rainforest Adventure Tours in B.C.