Many artists have passed away and left a final masterpiece tantalizingly unfinished. Even more interesting, albeit in a slightly morbid fashion, are the last works of artists who took their own lives. Some such works seem to hint at the dark thoughts consuming their creator, while others seem ironically serene and peaceful in relation to the artist’s inner suffering. 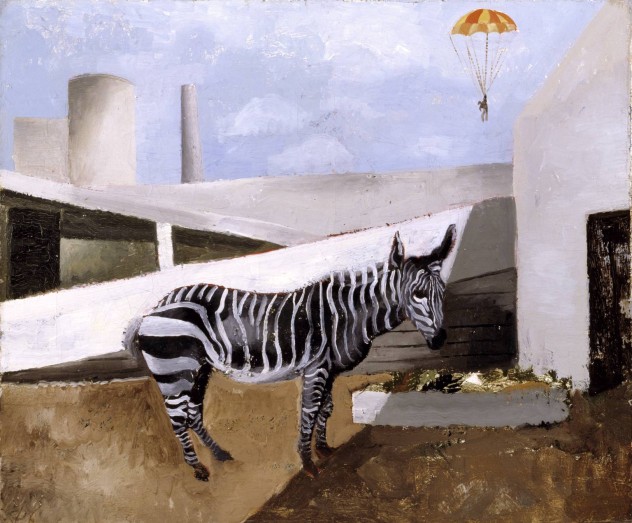 Zebra And Parachute was one of two paintings that Christopher Wood produced in Paris in the summer of 1930, the other being Tiger And Arc De Triomphe. Both paintings depict a surreal image of an exotic animal against the backdrop of a manmade structure, although Zebra And Parachute is unique in that it adds a parachuting figure in the sky. It may be darkly significant that the parachutist is limp and appears to be either dead or seriously injured.

After leaving Paris for England in August 1930, Wood met his mother in Salisbury to show her his newest works, including Zebra And Parachute. Tragically, Wood was suffering from the effects of opium withdrawal, which caused paranoia and the belief that he was being followed by a mysterious entity. In a desperate attempt to escape his imagined pursuer, Woods jumped in front of a train that very same day. To avoid upsetting his mother, the death often referred to as accidental by the contemporary press.

Over the course of his 40-year career, John Godward rarely deviated from painting beautiful women in robes. This style made him famous and he was often praised for depicting the rippling movement of classical clothing with incredible accuracy. But his paintings weren’t universal critical hits, with many dismissing his idealized and historically inaccurate portraits as “Victorians in togas.” His own family despised his choice of career and disowned him after he moved to Italy in 1912, destroying all photographs that reminded them of his existence

In his old age, Godward produced fewer and fewer paintings as his health deteriorated. His last known paintings are Contemplation and Nu Sur La Plage (“Nude On The Beach”), both of which were completed in the months before his death. Nu Sur La Plage is especially significant, because it marks a deviation from Godward’s usual style of classical scenes featuring fine clothes and marble surfaces. By then, Godward’s classical style was considered extremely unfashionable, but he apparently felt unable to change. In December 1922, he took his own life, writing in his suicide note that the world was not big enough for him and Picasso. 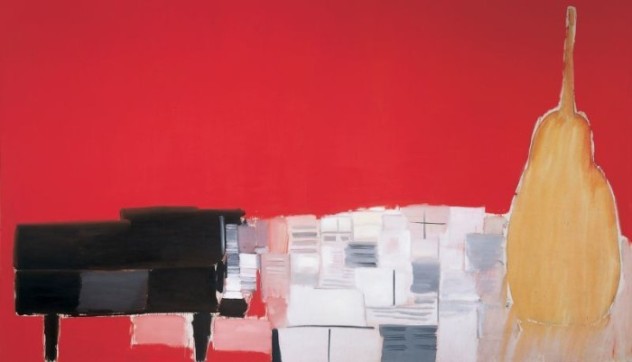 Nicolas de Stael was a prolific French abstract artist, producing thousands of paintings and drawings over the course of a relatively short career. In the last five months of his life alone, he produced 147 paintings, the last of which was most likely Blue Nude Lying, which was completed in 1955. In March of that year, he committed suicide by jumping from a tall building in Antibes, leaving his final work, Le Concert, unfinished. He was 41 years old.

Le Concert was de Stael’s largest and most ambitious painting, measuring six meters (20 ft) by 3.5 meters (11.5 ft). It features a grand piano and a double bass on a floor littered with sheets of music, referencing the fact that these two instruments are traditionally not removed from the stage after a concert is over. De Stael was inspired by a concert he had attended the night before, racing home and working on the painting all the next day, until the bad light made it impossible to continue. He then burned all his sketches and jumped to his death. Shortly before he died, he wrote, “I have not the strength to complete my paintings.” 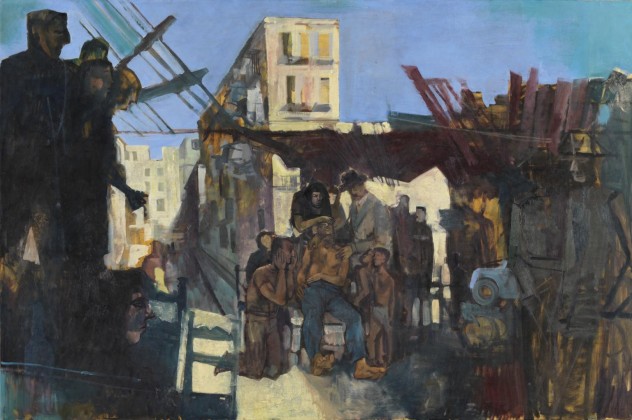 The final work of painter and illustrator John Minton was still incomplete when he committed suicide in January 1957. The unfinished painting depicts a gravely injured man surrounded by distraught onlookers. On the day before Minton’s death, the painter Ruskin Spear visited him at his studio and was told that he identified the dying figure with Hollywood actor James Dean, who had died two years previously in a car accident at the age of just 24.

Spear believed that James Dean represented the suffering of the younger generation, which Minton strongly related to. However, the true identity of the dying figure is debatable. It has been suggested that a more direct inspiration for the painting was a similar car accident which Minton witnessed in Barcelona and later came to identify with Dean. Minton’s suicide was provoked by his depression and a loss of confidence after the rise of abstract art caused the popularity of his work to decline. Although the painting is clearly unfinished, there are indications that Minton didn’t intend to do any further work on it, telling a friend that he was worried about turning it “into another Johnny Minton painting.” 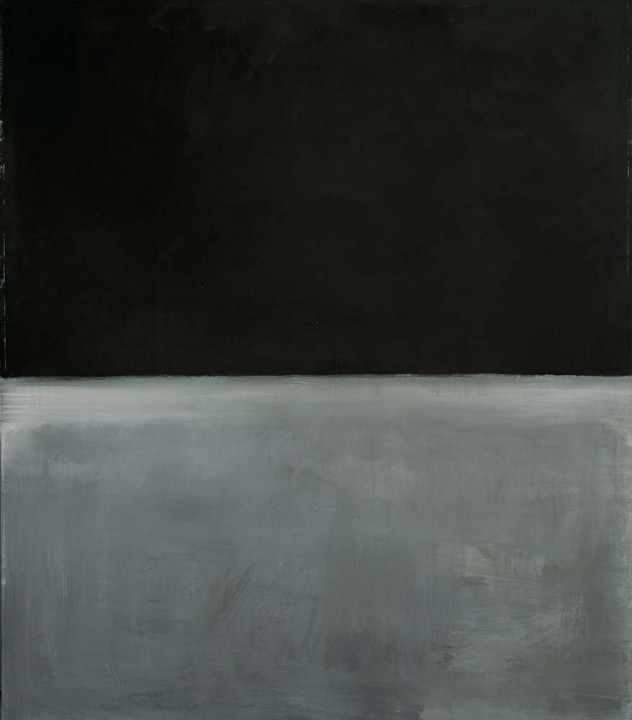 Mark Rothko’s reputation as an abstract artist largely rests on his famous paintings of vibrantly colored rectangles. These works were widely praised for their use of color to provoke emotional responses. But Rothko despised such praise and apparently wished to be taken more seriously as an artist and not just as a colorist. He insisted that he only cared about depicting emotion and was “not interested in the relationship of color or form or anything else.”

Toward the end of his life, his paintings became more bland and desolate, most likely in an attempt to challenge his public reputation. His final series of works were “the Black Paintings,” most of which consisted of a black and grey canvas with a horizontal divide and a thin white border. By Rothko’s own admission, the paintings are about death. Shortly after separating from his wife, and suffering from severe depression, Rothko committed suicide by slicing his wrists in his New York studio in 1970. 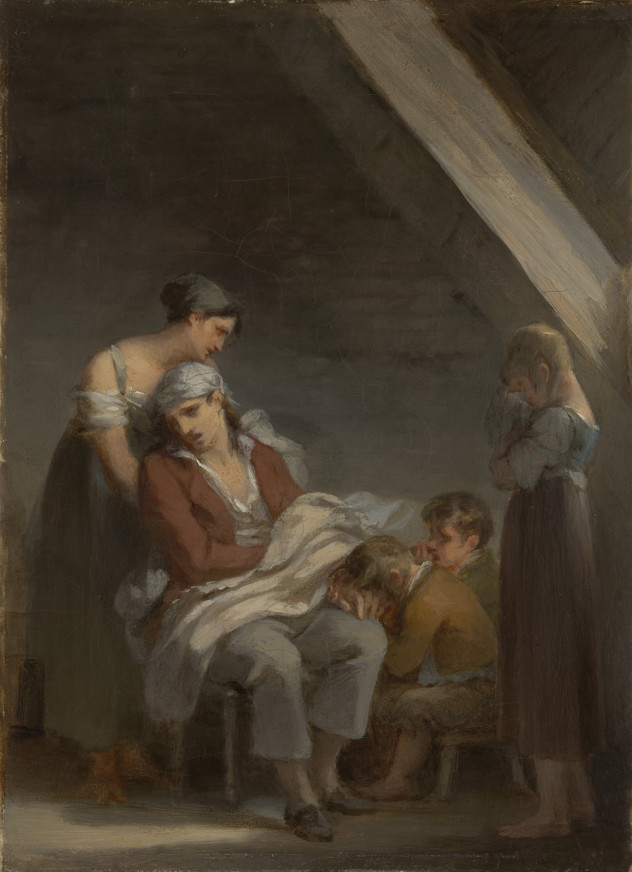 Although Constance Mayer killed herself while working on Une Famille Dans La Desolation (“A Miserable Family“) it isn’t unfinished. It was completed by Pierre-Paul Prud’hon, Mayer’s partner in one of the most famous doomed affairs in art history.

Meeting in 1803, when Prud’hon was one of the most famous painters in France and Mayer was a rising young artist, they soon became close collaborators, to the point where it’s said to be difficult to tell where her work ends and his begins. Since Prud’hon preferred drawing to painting, he would often sketch the design for a painting and Mayer would finish it in oils. Since Prud’hon was better-known (and a man) these were often sold as his work alone, with owners even replacing her name with his to get a better price. Still, Mayer was successful in her own right and maintained a studio in the Sorbonne.

It would have been a perfect match, but Prud’hon already had a miserable family of his own. He and his wife actually had six children, although the marriage was so unhappy that she had a breakdown and eventually died in a mental hospital. In one version of the story, Prud’hon’s promised his wife on her deathbed that he would never remarry, devastating Constance. Others suggest that the government requisitioning her Sorbonne studio pushed her over the edge. Either way, on May 26, 1821, Mayer cut her own throat with Prud’hon’s shaving razor. Devastated, Prud’hon would pass away two years later, but not before completing their final collaboration, a portrait of a grieving family. 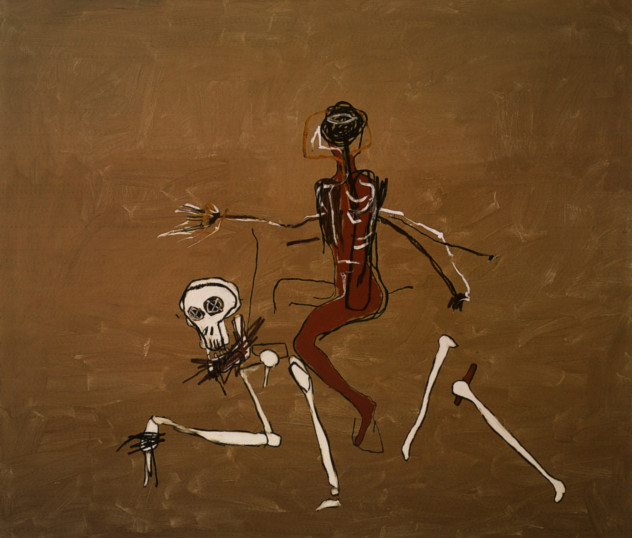 Jean-Michel Basquiat began his artistic career while in his teenage years, as a graffiti artist in Manhattan, before transitioning to painting later in life. His work quickly attracted widespread acclaim for its depth and composition and Basquiat was soon the toast of the art world. Unfortunately, the artist was also struggling with a heroin addiction and died of a “speedball” overdose (essentially a mix of heroin and cocaine) when he was only 27.

Basquiat was prolific and it isn’t clear exactly which is his final finished painting. But one of the likely candidates seems to be Riding with Death, which was completed in the months before his suicide in 1988. The work features a skeletal creature being straddled by a human figure. Although much of Basquiat’s late work has been criticized as lazy and overly commercial, Riding With Death remains a firm critical favorite, with some critics linking it to the concept of spiritual possession (“being ridden”) in Haitian voodoo. Other contenders for the title of Basquiat’s last painting are Eroica II, The Dingoes That Park Their Brains With Their Gum, and The Mechanics That Always Have A Gear Left Over. 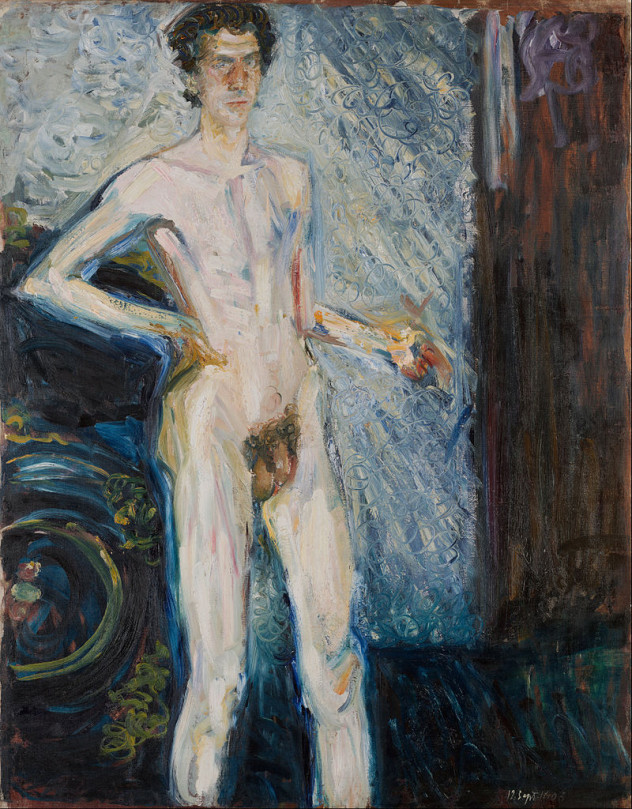 Richard Gerstl produced arguably his best work while engaged in a scandalous secret affair affair with Mathilde, the wife of famous composer Arnold Schoenberg. During the affair, Gerstl painted multiple nudes of both himself and Mathilde. After being discovered together in “a compromising position,” the pair fled from Mathilde’s husband and continued their relationship. Unfortunately for Gerstl, Mathilde eventually left him and returned to Schoenberg “for the sake of the children.”

Distraught by this, Gerstl would take his own life in November 1908, at the tender age of 25. To do the deed, he first stabbed himself in the torso. When this failed, he hung himself in front of a mirror in his new studio, surrounded by his paintings. His last known painting was Nude Self-Portrait With Palette, completed in September 1908, which shows a sickly pale and thin Gerstl on a vivid blue background. The long, jagged brushstrokes apparently indicate that the painting was created quickly, reflecting the artist’s agitated state at the time. 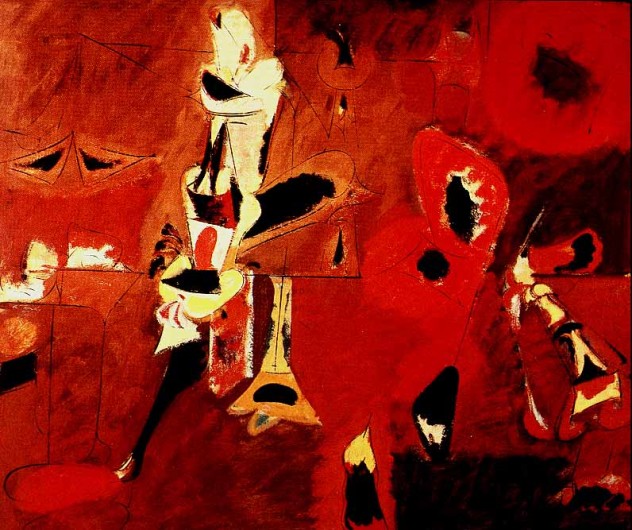 Arshile Gorky was an abstract expressionist painter who predominantly worked using simple shapes and colors to express meaning. In the years leading up to his death, Gorky endured many unfortunate and tragic events. In 1946, a fire broke out at his studio and many of his finest paintings were burnt to ash. In the weeks following this, his health deteriorated and he was diagnosed with cancer. Shortly after that, he discovered that his wife Agnes had been cheating on him with another artist. The couple separated, and Agnes moved away with their two daughters.

In 1947, Gorky produced numerous paintings, including Agony, The Plough And The Song, and The Limit And The Beginning, any of which might be said to have been his last work. Agony is perhaps the most interesting, since it can only be understood in relation to Gorky’s immense suffering shortly before his death. The blazing red colour, which Gorky seldom used prior to Agony, is most likely a reference to the fire that destroyed his studio. In 1948, Gorky’s tragic run of bad luck came to a devastating climax when he broke his neck in a car accident, paralyzing his painting arm. Unable to work, he committed suicide in his studio a month later. 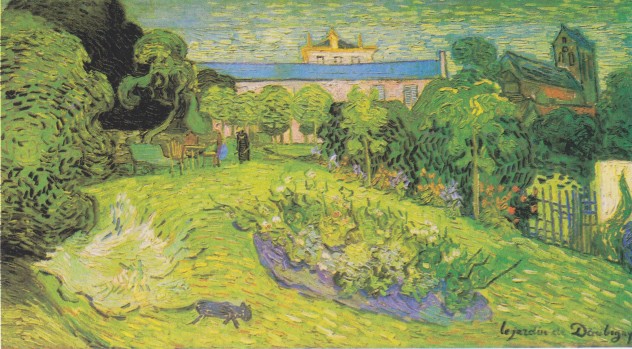 On the morning of July 27, 1890, van Gogh went outdoors to paint, apparently bringing a loaded gun with him. He then attempted suicide by shooting himself in the chest, although the bullet failed to kill him. He died two days later in the presence of his brother, at the age of 37. Van Gogh never achieved any real success or fame before his untimely death and, as a result, his mother tragically disposed of a large amount of his work.

Josh Fox student from the UK who is back writing lists again after a three-year break.