Almost 2 percent of the Earth’s surface is covered by freshwater. Much of that is contained in lakes with legendary monsters that are low-rent rip-offs of the Loch Ness monster. But the best of the local lake monsters terrorize their communities in unique ways and spark their own local legends. 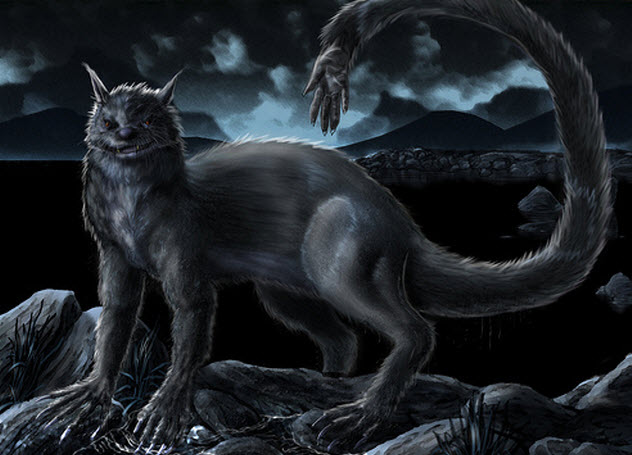 In the Aztec Nahuatl language, ahuitzotl means “spiny aquatic thing” or “thorny thing of the water.” It was described as a five-handed amphibious hyena that inhabited bodies of water around Tenochtitlan, now the Mexico City area.

The ahuitzotl could mimic the cries of a child or distraught woman to lure people into danger. These creatures drag their prey underwater using the hands on their legs or the hand at the end of their terrifying tail.

However, this may just be undertow branded as monsters that look like Mesoamerican native dogs. These dogs were culturally associated with lightning, sunsets, and death by the Aztec people. If ahuitzotls are somehow an aspect of the death god Xolotl, their moist murders could be attributed to a religious belief by Tenochtitlan locals. 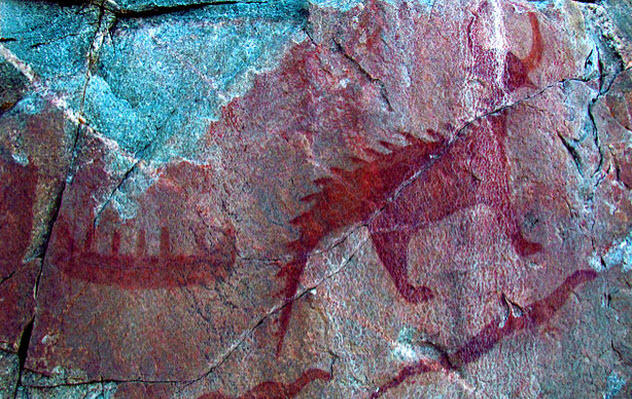 The Ojibwa people around the Great Lakes region named their lake monster the mishepishu (“great lynx“). The great lynx, a beast which might inhabit any lake, was said to be responsible for strong waves, rapids, and whirlpools in lakes and rivers in the region.

These spiritual pseudodragons are extra-large lynx with broad paws and scales on their backs. Sometimes, they come with horns in different places on their bodies. The tail may be made of pure copper, which was common in the land around Lake Superior.

One folktale talks about a woman who cut off the end of a mishepishu’s tail, which transmogrified instantly into a chunk of copper. Some indigenous populations figured that these great lynx must be guardians of the copper-rich lands around their waters, drowning people foolhardy enough to venture too far offshore or into rivers that are rarely traveled. 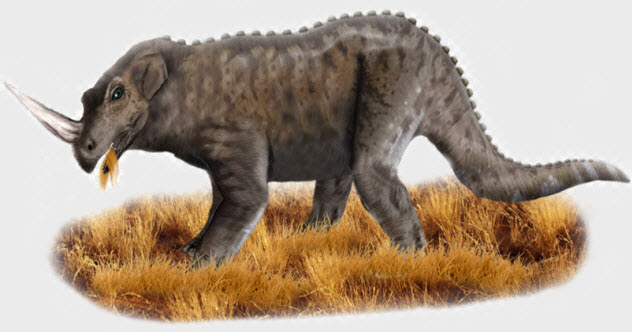 Emela-ntouka means “elephant killer” in the Lingala language of Central Africa. The creature is allegedly an elephant-sized uniceratops that stomps around the lakes and rivers of the Congo River basin. It sounds exactly like a rhino but much larger and with better horns than any rhinoceros on Earth.

The emela-ntouka belongs to a group of theoretical living dinosaurs that are often said to inhabit Africa as well as Western imaginations. Cryptozoologists think that this elephant killer might be an extant ceratopsid that’s like a triceratops without a ridge on its head.

However, ceratopsid fossils are found in North America. That makes the Congo a weird place for that kind of living fossil to roam. If there ever was an emela-ntouka, it was probably just the great white buffalo version of a rhino. If that’s the case, there may be a easy explanation as to where the emela-ntouka went. 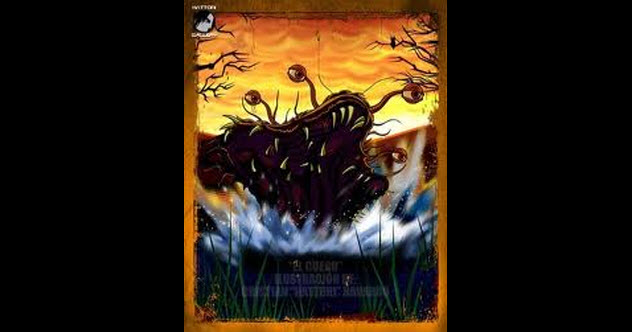 Cuero is Spanish for “leather” or “cowhide,” and El Cuero is a giant flap of ferocious flesh inhabiting Lago Lacar in the Andes. El Cuero is said to be a meaty tarp covered in daggerlike claws or teeth with eyestalks extending from wherever this creature might keep its brain.

The Scully explanation is that it’s a giant freshwater stingray like the kind that can be found in South Asian rivers. But there’s not much reason for a stingray to snatch a baby from an Andean shoreline or suck blood through a straw coming from the part of its body that doubles as a face.

Stingrays don’t have eyestalks, and their skeletons are low profile. But they do have large eyes for their height. People might just make a cute animal into a creepy mutant through their imagination filter. 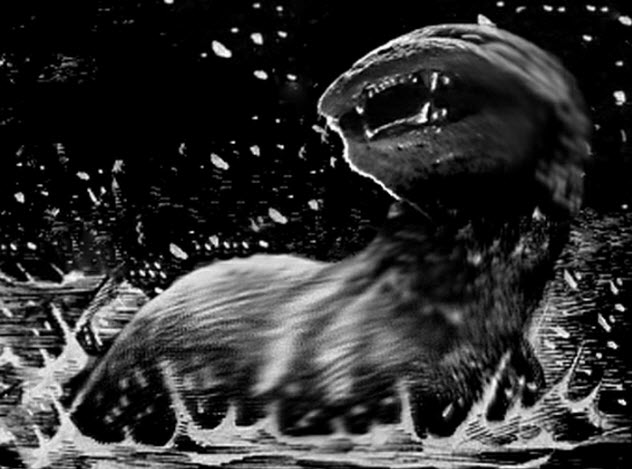 The Irish dobhar-chu is a huge creature that is part otter and part wolf. It has impenetrable skin and an insatiable bloodlust. For centuries, legends of the “Irish crocodile” species in inland Irish waters have told of these animals tearing through humans and horses that wander too near a dobhar-chu habitat.

Unlike other lake monsters, there are no real animals in the area that sound like a dobhar-chu. If these animals were numerous, faster than galloping horses, and fully comfortable on both land and water, they could best be rationalized as animal representations of a natural phenomenon like flash flooding.

These creatures would have to exist in the imagined intersection of several factors. For example, a flood would have to carry a person to a place where the corpse is discovered by a critically endangered bear that shreds the body and leaves it for other humans to find later.

LAKE WORTH MONSTER AKA GOATMAN

In summer 1969, Fort Worth, Texas, residents reported a series of encounters with a “fishy man-goat” on the shores of Greer Island on Lake Worth. The goatman may have inspired Friday the 13th with his violent hatred of boning teenagers. Several accounts of the goatman come from visitors to the area’s make-out point late at night when that activity was still popular with kids on weekends.

This monster was the approximate size and shape of a person in a gorilla costume. That might mean something, but the creature allegedly cut a 45-centimeter (18 in) gash in the side of a car and later chucked a tire at another car.

Several people have written to local news outlets to claim responsibility for the goatman’s activities. There are so many local stories that it’s hard to say what really happened. But it was probably just kids who didn’t have enough homework to keep them indoors at night. 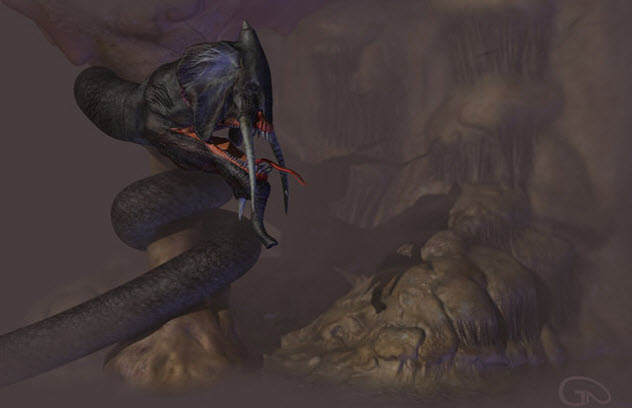 Like something out of a B movie, the grootslang is a serpent with the head of an elephant that slithers through darkest Africa. This is not exactly a lake monster because it’s said to live primarily in the Wonder Hole—a sea cave that stretches 65 kilometers (40 mi) inland—as well as in some of the lakes and rivers surrounding it. The grootslang is a natural enemy of child slavery as it automatically protects the diamond-stuffed Wonder Hole from greedy human hands and eyes.

The danger of the Wonder Hole may be intrinsic to the nature of an oversize sea cave lined with raw diamonds. But the legend has been kept alive by disappearances of and attacks on explorers in the area. For example, Peter Grayson disappeared without a trace in 1917 on an expedition into the Wonder Hole.

Other stories of the grootslang might be exaggerated sightings of pythons and monitor lizards. This seems to be especially plausible because the birth of this legend coincides with white Afrikaners doing their best to survive in “untamed” lands populated by animals that had previously seemed unimaginable. 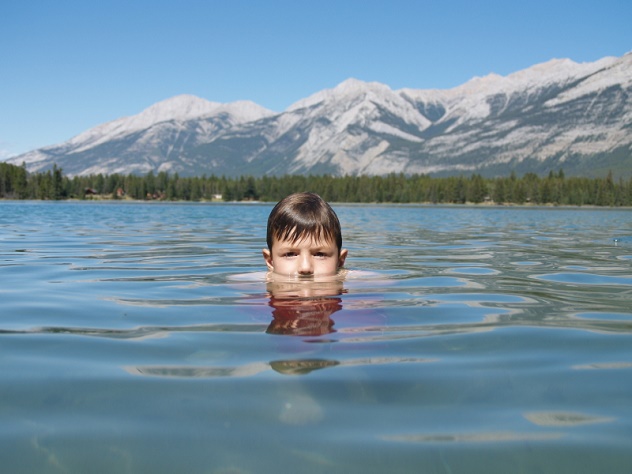 The Mighty Boosh’s Old Gregg is basically a humanoid trickster that creeps around in northern British waters. It’s mostly just a jerk.

Some legends claim that the shellycoat is humanoid enough to portray itself as a drowning human until someone comes to save it. Then it laughs in the Good Samaritan’s face before it swims away.

Unlike most of these monsters, a shellycoat isn’t a violent or wild beast. As a monster, it’s more like an anthropomorphic imp whose skin is covered in shells.

These creatures definitely aren’t representations of a natural phenomenon. Shellycoats may have evolved as the bro version of mermaids for Scots who preferred a good laugh from their water nymphs rather than titillation. 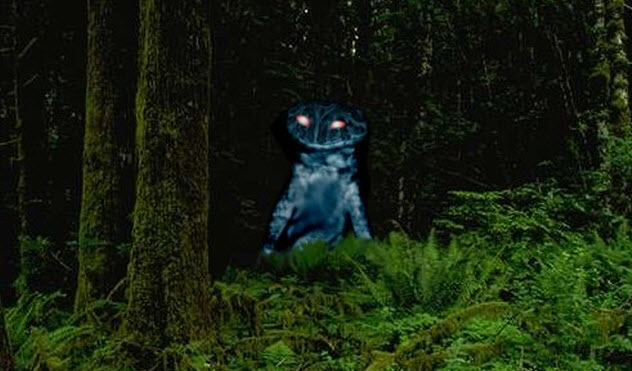 The frogmen of Loveland, Ohio, are as many as three creatures, possibly aliens, who have been seen around rivers in the area since 1955. Some accounts give them an extraterrestrial dimension, claiming that they might be signaling remote observers. Otherwise, they are leathery frog or lizard people with webbed hands and feet that are 1 meter (3 ft) tall.

In one account that was supposedly witnessed by 80 people in Brazil, a rash of captive animal deaths occurred in an area where two frogmen were captured. These creatures could be a combination of many things, such as an incompetent zookeeper or some overconfident swimmers. It’s also possible that the frogmen were one or two alligators that got lost over the 50-year span of sightings.

In some cases, the frogmen might just be the products of vivid imaginations. For example, a police officer who had claimed to see a child-sized frogman in 1972 changed his story in 1999. In the later version, he said that he had actually seen a normal lizard. 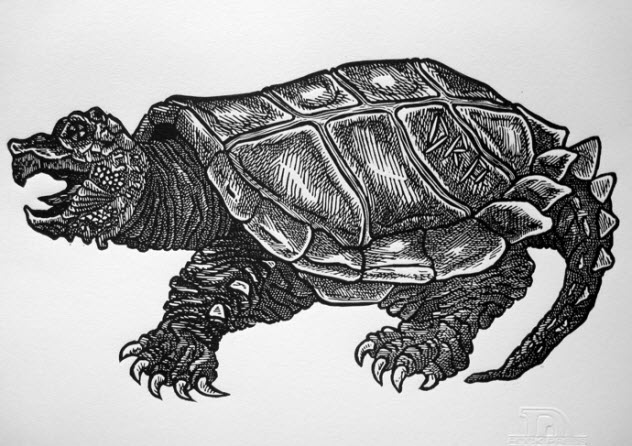 Oscar—the beast of Churubusco, Indiana—was supposedly a snapping turtle that weighed 225 kilograms (500 lb) and was the size of a dinner table. From 1898 to 1949, this creature allegedly inhabited a lake on a farm. Oscar gained brief but widespread attention when the farmer drained the lake to capture the huge turtle and make some big money from it.

Although Oscar isn’t a hard-to-imagine monster, there’s something captivating about a normal animal that is 10 times the size of an average specimen. Of course, there are factual examples of oversize man-eaters in the world. A notorious one was Gustave, the 6-meter (20 ft) Nile crocodile who supposedly killed more than 300 people in Burundi. Other animals, like lobsters, will continue to grow indefinitely if they aren’t killed.

But Oscar was never found, so it might have been some kind of light trickery. Although the original “discoverer” claimed to get close enough to carve Oscar’s name into his shell, no shell or turtle was ever recovered. This makes it seem like a bit of fun local folklore and little more.