Some monuments and statues instill a sense of pride, beauty, and country—those unforgettable works of art that you saw on field trips and in the pages of history books. But there are also less-explored monuments—odes to the weird, the wonderful, and the just plain wacky. There are thousands of commemorative monuments out there and plenty of roadside guides and travel books to point you in the right direction to see them. These quirky monuments draw in tons of visitors per year; sometimes, it’s just too hard to resist the bizarre.

There is nothing out of the ordinary about erecting a statue to commemorate a noble person or a period in history. However, a memorial for an insect is far less common. In Enterprise, Alabama, visitors have the unique opportunity to visit the Boll Weevil Monument, a statue of a woman proudly displaying a large boll weevil above her head. The monument was constructed in 1919 as a symbol of the perseverance of local farmers.

It seems that this particular agricultural pest wreaked havoc on the cotton crop and forced farmers to take up planting peanuts instead, a move that turned out to be extremely profitable for the town. The statue sits in the middle of Main Street and receives several visitors each year. The plaque on the monument reads, “In profound appreciation of the Boll Weevil and what it has done as the herald of prosperity, this monument is erected by the citizens of Enterprise.”

Nearly all of us have heard of Stonehenge, but you’d be hard pressed to find many who have heard of Carhenge. This bizarre monument sits in the grassy planes of Alliance, Nebraska, a memorial to the classic American cars of yesteryear. The cars, mostly from the 1950s and 1960s, are situated in a circle with their noses in the ground and yet more cars balancing on top of them. The roadside attraction was built in the 1980s and mimics the exact arrangement of Stonehenge.

The maker of this odd monument created it to commemorate his father. The property upon which it resides contains other automotive tributes, including a cemetery dedicated to fallen foreign vehicles. In 2011, Carhenge was put up for sale with an asking price of $300,000. That may seem like a steep price, but it is estimated that this quirky site attracts around 80,000 visitors per year from all over the globe.

Why anyone would want to build an ode to an enema is beyond most, but such a monument does exist in the southern Russian city of Zheleznovodsk. The bronze memorial weighs 360 kilograms (800 lb), is 1.5 meters (5 ft) tall, and is balanced on the backs of three naked cherubs. The enema is considered a work of art by the director of the Mashuk-Akva Term Spa and is proudly displayed in the front courtyard of the building. The mountainous region where the spa is located is known for its digestive treatments, which involve enemas filled with natural spring water to help patients deal with intestinal discomfort. In this way, the enema actually serves as a symbol of local health services.

The statue cost a whopping $42,000 and was unveiled in 2008 to an excited crowd. A banner stuck on one of the spa walls read, “Let’s beat constipation and sloppiness with enemas.” The sculptor who created the enema said that she did so with irony and humor in mind. Her goal was to model the three angels after those seen in works from the Italian Renaissance. No doubt Botticelli would be proud.

After the death of Steve Jobs, an interactive iPhone was erected in front of St. Petersburg’s National Research University of Information Technologies, Mechanics, and Optics. The memorial had a lit display with a slideshow displaying photographs and videos from the life and career of Jobs, focusing on his many achievements as CEO of Apple. The phone also had a large QR code on the back, which visitors were able to scan and be redirected to a website commemorating Jobs.

Despite being quite popular, the giant iPhone was taken down by Russian officials only a year after it was unveiled. The firm that originally put the memorial up decided to dismantle it the day after Tim Cooke, Apple’s newest CEO, announced his sexual orientation. A Russian news station reported that the monument was removed because of the country’s homosexuality laws involving minors and because it was revealed that there may be a tie between Apple’s products and national security. The college where the iPhone was displayed denies these claims and states that the phone was malfunctioning and needed to be repaired. The monument has not been put back up.

Artist Jerzy Kenar got tired of stepping out of his Chicago home and constantly stepping in dog poop. So, he decided to put his talents to good use and created a visual monument that would serve as a reminder to the dog owners of the neighborhood to scoop up what their pups leave behind. Enter Shit Fountain, a fecal-shaped bronze coil on top of a cement pillar with the monument’s title carved into the side.

The statue also has water trickling over the top of it in order to give it that freshly excreted look. The fountain is beloved by passersby, and people often have their photos taken squatting above the statue or mimicking quenching their thirst. The artist believes that it has helped local dog owners to be more conscientious and finds the work to be an important part of the neighborhood scenery.

The 8-meter-tall (25 ft) fiberglass Headington Shark is hard to miss not just because of its length, but more so because it appears to be crashing headfirst into the roof of a cozy British house. The shark was placed on the house’s roof on August 9, 1986, the 41st anniversary of the Nagasaki bombing, by the homeowner as a statement about the devastation brought on by the use of nuclear weapons. The local neighborhood council wasn’t particularly thrilled about the bizarre leviathan and attempted to have it removed. However, the homeowner successfully appealed to the British Secretary of the Environment on behalf of the shark and was able to save it from being taken down.

Visitors from around the world flock to New High Street to see the shark each year. Many come to celebrate the shark’s birthday. Drinks and cake are served, and the owner of the home signs copies of his book, The Hunting of the Shark. The home (shark attached) went up for rent in 2014 for just over £2,000 a month. The owner prefers to rent to individuals who don’t mind visitors taking photographs of the shark and who don’t mind answering the occasional question about its meaning. Ironically, however, he has asked that only tenants without pets inquire.

“Die Badende” translates to “The Bather,” and one look at the statue in the Inner Alster Lake in Hamburg, Germany, will tell you why. The huge sculpture of a woman’s head and bare knees was on display for only 10 days and gave the body of water the appearance of a giant bathtub. The Bather was 20 meters (67 ft) long and weighed more than 2 tons. Tourists came in droves to view the woman before she was removed weeks later by a large crane. Swimming through her parted legs was particularly popular among boats crammed with visitors.

Artist Oliver Voss created the sculpture as an advertisement for British beauty company Glory. The company wanted to make a “big splash” in thanking the German people for embracing their latest line of products. The advertisement proved very successful; customers and a large crowd gathered to watch the woman hoisted from the water. The movers had a large towel ready to conceal her lady bits from peeping eyes. 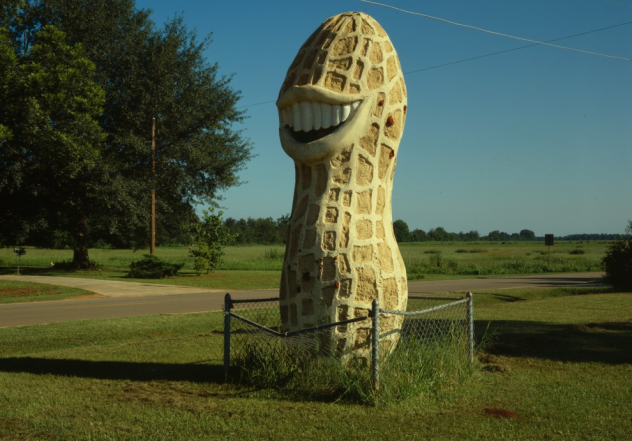 The Jimmy Carter Peanut might give you nightmares, standing at 4 meters (13 ft) tall with a wide, toothy smile and no eyes. The peanut can be found on the side of the road in Plains, Georgia. The structure started out far from Georgia, however. It was actually constructed in Indiana in 1976 to honor Jimmy Carter’s visit to the state during his presidential campaign tour. Why was a giant, smiling peanut, of all things, used as a tribute? Well, before he was president, Carter was actually a peanut farmer.

The statue also possesses the same grin that was known so fondly as one of Carter’s most handsome traits during his years in office. In 2000, a car struck the poor peanut, causing it to topple over. But don’t worry: The peanut was restored to its former glory and can still be visited today. Not surprisingly, it’s the most (if not the only) photographed thing in Plains.

The park is roughly the size of two soccer fields, and it takes visitors about an hour to see all that it has to offer. The statues were created by graduate students from Seoul’s Hongik University and have an educational function as well. Many marriages in South Korea are arranged, and as such, couples can find themselves in the situation of being new to the delights of marriage. Jeju Loveland has become a popular spot for honeymooners to visit and receive a type of crash course in sex education. The theme park wants to be open to all types of visitors and even has a playground for anyone visiting with children.

Brownnosers, created by Czech artist David Cerny, takes the term “brownnoser” to an entirely new (and literal) level. The two statues stand, or rather bend over, outside the Futura Gallery in Prague. The two figures are positioned side-by-side with the lower portions of their torsos protruding from a cement wall. Viewers are invited to climb ladders attached to the open anuses of the figures and stick their heads inside the openings.

Inside the statue is a video depicting the Czech President Vaclav Klaus and the head of the National Gallery spoon-feeding one another. The video shows the two men (really actors) in masks, feeding each other to the tune of Queen’s famous song “We Are The Champions.” The piece is meant as a criticism not only of the political situation in the Czech Republic, but as a physical manifestation of the artist’s disdain for the National Gallery. In fact, Cerny’s hate for the gallery runs so deep that he actually refused to accept the award they gave him. He stated that upon meeting the curator of the museum, “It was hate at first sight.”

Lee DeGraw is a freelance writer with an inquiring mind.