Many ancient wall paintings are said to show flying objects and visitors from outer space. But these images also appear in classic, commissioned pieces of art—particularly those that depict divine events. Is there a genuine connection between the divine and alien activity? According to a cadre of believers, these 10 classic pieces of artwork clearly show UFOs.

10 The Annunciation With Saint Emidus
1486 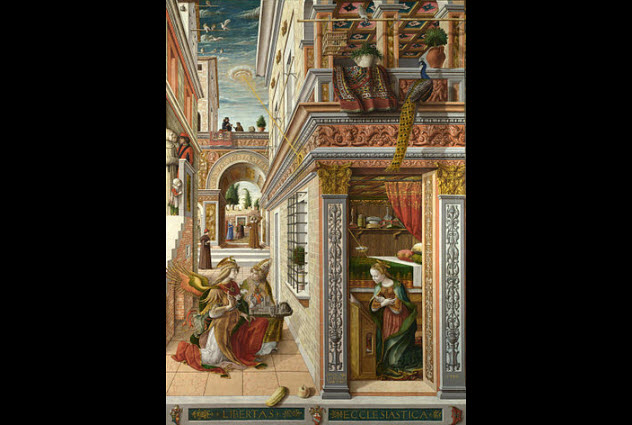 The Annunciation with Saint Emidus, which was painted in 1486 by Italian artist Carlo Crivelli, shows the Virgin Mary shortly before she realizes that she will give birth to Jesus the saviour.

A beam of light coming from a round opening in the sky to Mary’s head is said by most mainstream art critics and historians to be the halo of the Lord projecting down to Mary.

However, UFO and alien enthusiasts have interpreted the halo as a disc-shaped UFO. Their belief is that Jesus was not divine at all. Instead, it was the result of genetic engineering and the implanting of a child into the unsuspecting Immaculate Conception. Supposedly, she was abducted and impregnated by an alien race.

They argue that the beam of light striking Mary while she is indoors is consistent with modern-day alien abductions. Many people who claim to have been abducted state that they were inside their homes when a strange light shone from outside the buildings. 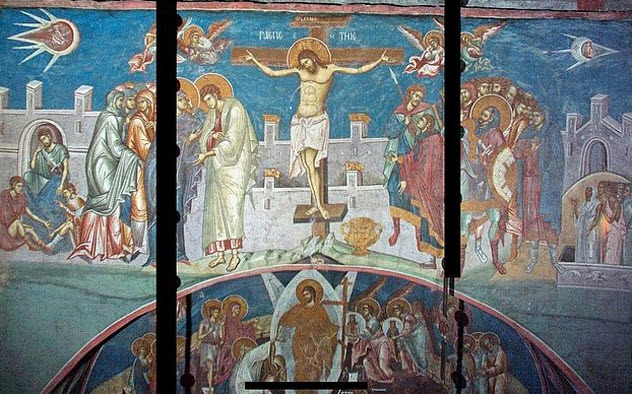 The Crucifixion of Christ, which hangs above the altar of the Visoki Decani Monastery in Kosovo, depicts the crucifixion of Jesus Christ with a clear airborne craft in each corner of the painting.

Even stranger, a person appears to be piloting each aircraft. The pilot in the top right corner is looking back at the craft behind him—as if he is being pursued. Both pilots seem to be dressed in space suits. The lack of halos near them appears to rule out the possibility that they are divine beings.

Mainstream theorists have suggested that the UFOs are symbols of the Sun and the Moon. However, the Christian church does not recognize the Sun or the Moon as deities or divine beings. At the time that this painting was created, such a suggestion would have been considered blasphemy and could have resulted in the person being put to death. 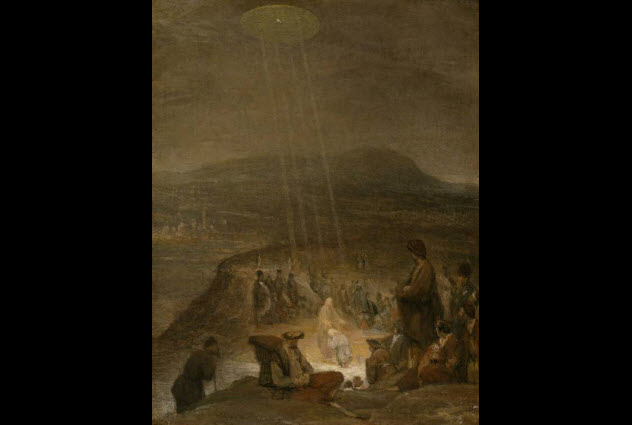 The Baptism of Christ, which was painted by Dutch artist Aert de Gelde in 1710, shows a disc-shaped object shining several beams of light toward the baptismal scene below.

Gelde was a keen student of Rembrandt. Some believe that this would have given the Dutch artist access to the Vatican’s art archives and their “secret knowledge.” As a result, many people believe that Gelde’s paintings, especially this one, are cleverly conveying that secret knowledge to the public.

Whether this is true is open to debate. But four columns of light (rather than a single ray) emanating from the craft seems to suggest that this is an actual object.

The painting now hangs in the Fitzwilliam Museum in Cambridge, UK. 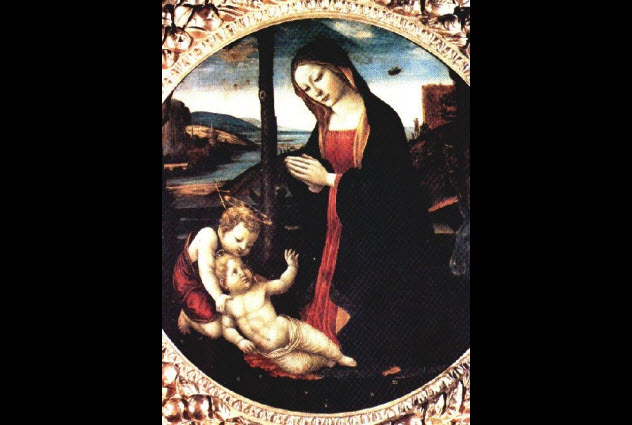 In the painting The Madonna with Saint Giovannino, a flying craft is above and behind the left shoulder of the Madonna. A man is staring up at the craft. His dog appears to be barking at it, which suggests that the object isn’t divine.

Rays of light appear around the craft. The position of the Madonna in relation to her children has led some to suggest that she is shielding them from the craft. Her halo also appears to be darker and fainter in this particular picture. Could that be related to the object in the sky behind her? Did it have a diminutive effect?

Another theory is that the object is simply a symbol of Domenico Ghirlandaio, the artist. He is believed to have painted the piece during the second half of the 15th century, although other researchers have attributed it to Jacopo del Sellaio or Sebastiano Mainardi. 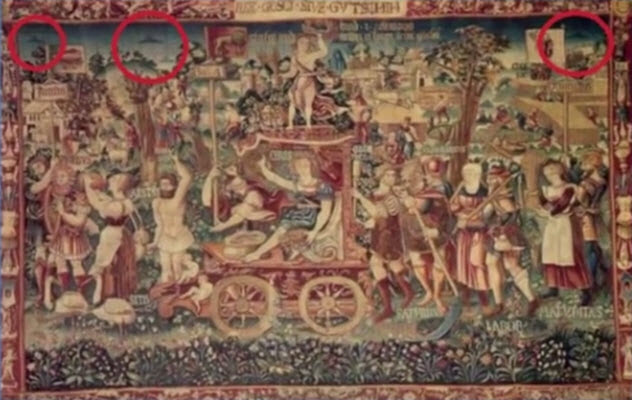 The Triumph of Summer tapestry, which was created in Bruges, Belgium, in 1538, shows several objects that look like modern UFOs. In the top left of the tapestry, several saucer-shaped objects appear to have raised sections in them—almost as if they were cockpits.

As there are no known religious symbols that look like this, it has to be assumed that these objects do not symbolize something divine. The piece is supposed to depict a ruler’s ascent to power, so it is difficult to see the connection between this scene and the strange craft.

However, it is possible that the connection is nothing more than the artist recreating a natural phenomenon that he had previously seen. Today, this tapestry can be viewed in the Bayerisches Nationalmuseum in Germany. 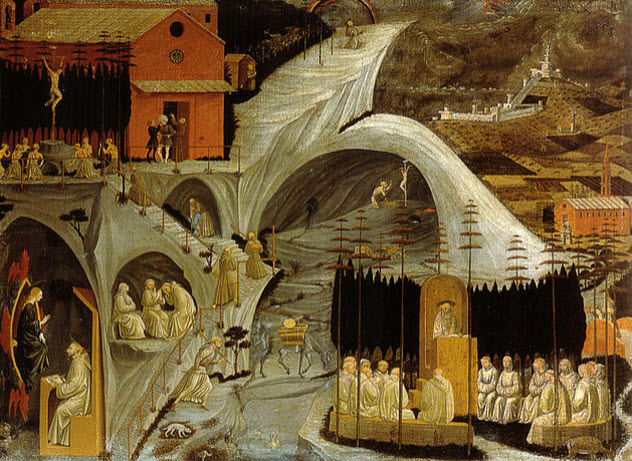 Painted in the mid-15th century, La Tebaide (aka Scene di vita eremitica) is a montage of scenes showing various aspects and beliefs of monastic life. Part of this picture shows Jesus on the cross, and many eagle-eyed enthusiasts have picked out a small, red, disc-shaped UFO at the bottom of that scene.

Debunkers claim that the red, saucer-shaped object is nothing more than a traditional cardinal’s hat that belongs to St. Jerome, the person kneeling in front of the cross.

On the other hand, UFOlogists believe that the red trails projecting from the “UFO” show its erratic movements. However, the trails are probably just the tassels of the traditional headpiece. Besides, this hat appears in many other paintings of St. Jerome. As in this picture, the hat is usually found close to him.

La Tebaide is currently on display at the Academy of Florence, Italy. 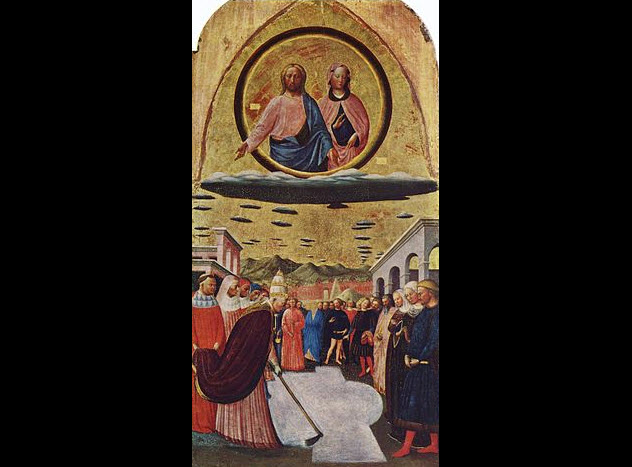 The Miracle of the Snow by painter Masolino da Panicale supposedly depicts the legend of snowfall that occurred in Rome on a hot summer’s day in August in the fourth century.

While the townsfolk were investigating this unusual weather, Jesus and Mary sat on a cloud looking over the scene. Although it could be argued that the cloud represents Heaven, there are many disc-shaped “clouds” filling the sky behind Jesus and Mary’s cloud.

Would an artist who has paid attention to detail in every other aspect of his work paint a cloud in such a simplistic way? UFOlogists tend to think not and suggest that these clouds are UFOs that may have once been part of the legend.

This theory has some credibility because UFO activity has been linked to strange turns in the weather at times. For example, on October 27, 1954, several egg-shaped craft were seen flying through the sky in the middle of the afternoon in Florence.

At one point, they came to a halt over a football stadium as if observing the events below. Many witnesses described a “silver glitter” that appeared to fall from the sky as the strange objects flew overhead. The glitter looked similar to snowflakes when examined on the ground.

This mysterious painting depicts a giant disc-shaped object above a burning church. The painting currently sits in the Church of the Dominican Monastery in Sighisoara, Romania.

This location is in the legendary region of Transylvania, which was the birthplace of Vlad III, prince of Wallachia. You may know him better as “Vlad the Impaler” or “Vlad III Dracula”—the same Dracula that inspired Bram Stoker’s classic 1897 novel.

It is not known if there is a connection between Dracula and the painting. Although mainstream historians argue that the disc-shaped object is nothing more than a shield, its size as well as the smoke that appears to be trailing out of it suggests otherwise.

Although it is not known exactly when the painting was created or by whom, the German caption below it reads: Israel, hoffe auf den Herrn (“Israel, put your hope in the Lord”). As the Bible was not translated into German until 1523 and a fire destroyed the original monastery in the 17th century, the painting was probably created after those two events.

2 Glorification Of The Eucharist
Early 1600s 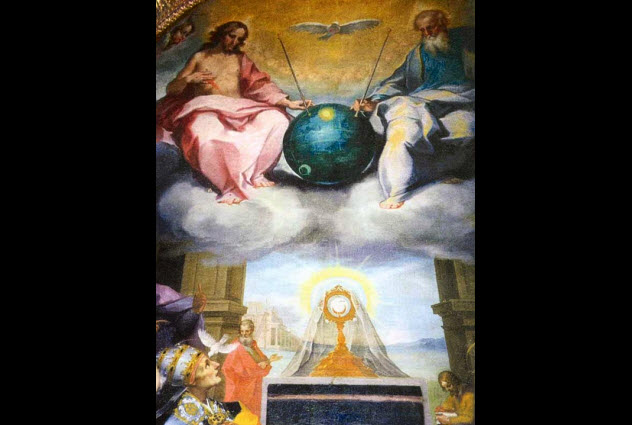 Some people believe that the Glorification of the Eucharist, which was painted by Ventura Salimbeni around 1600 after being commissioned by the Church of San Pietro in Montalcino, suggests the possibility of alien life or time travel.

Some people believe that the globe-shaped object positioned between Jesus and the Holy Father at the top of the painting is a monitoring device. In fact, a telescopic “eye” can be seen on the bottom left of the sphere.

Others point to the similarities in appearance between the globe and Sputnik 1, the first satellite that was launched into space. These people suggest that the artist could foresee the future or he traveled through time and saw the future firsthand.

1 The Crucifixion Of Christ (Georgia)
Circa 1600s 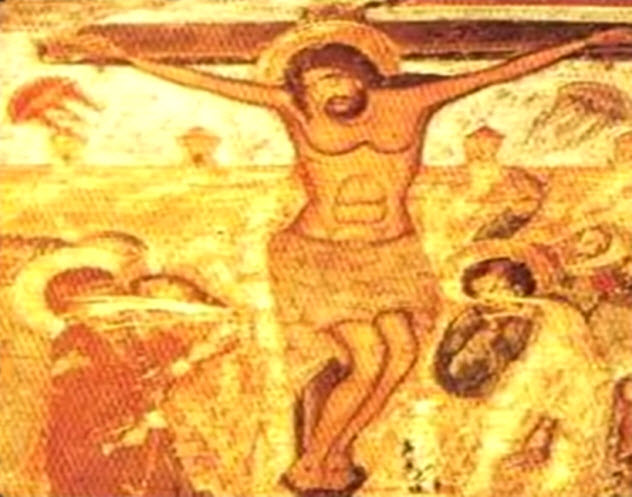 This idea of aliens being present at such key events in Jesus’s life makes sense to some ancient astronaut theorists, who firmly believe that Jesus was an alien-human hybrid.

According to them, Jesus’s human mother, Mary, was artificially inseminated with a fetus that contained alien DNA. They also claim that “Angel Gabriel” was a real flesh-and-blood alien who conducted the procedure by convincing Mary that it was a dream and that he was a messenger of the Lord.

If true, this would also make Mary one of the first alien abductees in recorded history.