The first 100 years or so of the United States’ existence was filled with travesties like the Civil War and the enormous slave trade which flourished in the South. In addition, manifest destiny and the inherent racism involved with the “white man’s burden” led to a number of horrible massacres of the Native American population. Some are well-known, like the Wounded Knee Massacre, but there are other terrible examples that we shouldn’t forget. 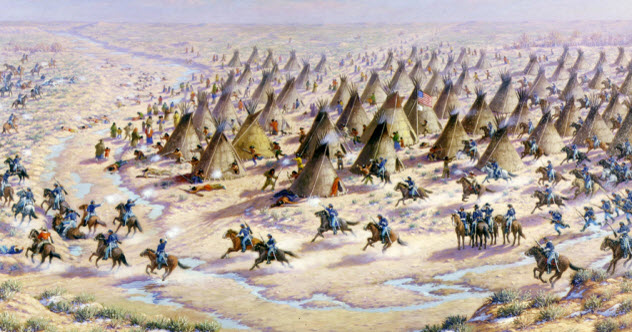 At Sand Creek in the Colorado territory in 1864, the Cheyenne village of around 800 was supposed to be protected territory. Chief Black Kettle had brokered a deal with a nearby US Army fort for his people’s safety, but this proved to be an outright lie.

Colonel John Chivington had decided that winning battles against local Native American tribes was the best way to become a territorial delegate to Congress. When spring 1864 proved fruitless for battle, he used a 700-volunteer militia to burn Native American villages.

On November 29, just one day after Black Kettle’s deal, the Colorado Volunteers attacked Sand Creek. Nearly all the Cheyenne men were out hunting, leaving the women, children, and elders with no one to protect them. Between 100 and 400 Native Americans were slaughtered.

Although Chivington was denounced by much of the country, he was never formally charged with anything. 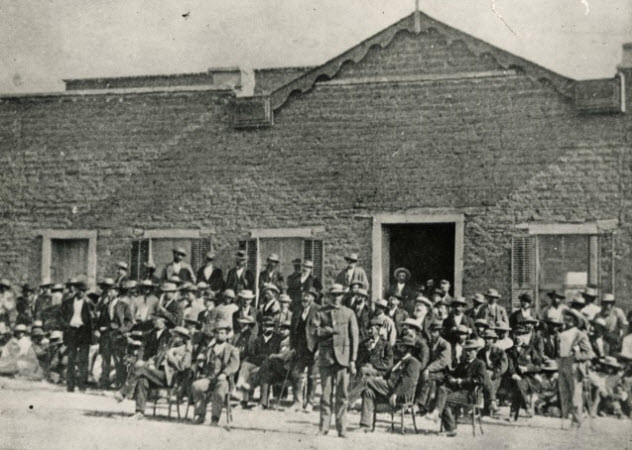 Shortly after the start of President Ulysses S. Grant’s “Peace Policy” toward Native Americans, the Camp Grant Massacre occurred in southern Arizona on April 30, 1871. The local Apache had recently agreed to live at Camp Grant via an order by Lieutenant Royal E. Whitman, who also pledged to provide the tribe with food.

Unfortunately, public opinion turned against the military in Arizona, declaring them unable to protect the territory’s citizens. A handful of Americans, some Mexicans, and some rival Native American tribesmen sneaked up on the peaceful village in the middle of the night.

Most of those killed were women and children because the men were out hunting for food. The perpetrators of the massacre had used unfounded claims of Apache depredations to justify murder. Although 104 men were charged with murder, all were acquitted at trial. 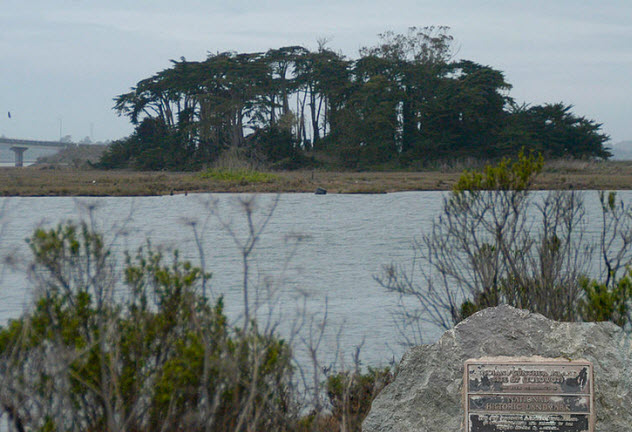 In an act of genocide on a small tribe, the Wiyot Massacre took place on February 26, 1860. (Smaller attacks on the Wiyot tribe took place later that week.)

For at least 1,000 years, the tribe had lived off the northern coast of California on what is now called Indian Island. The peaceful Wiyot had just completed their annual world renewal ceremony, marking the start of their new year.

The men were out gathering supplies when a small group of white men crossed Humboldt Bay and slaughtered women, children, and the elderly. From 60 to 200 people died.

The local sheriff lied, citing revenge for cattle rustling as the reason. In reality, a local militia wished to be federally recognized as a state militia to receive money from the government. The militia leader believed that massacring local tribes would accomplish that goal, but it didn’t work. 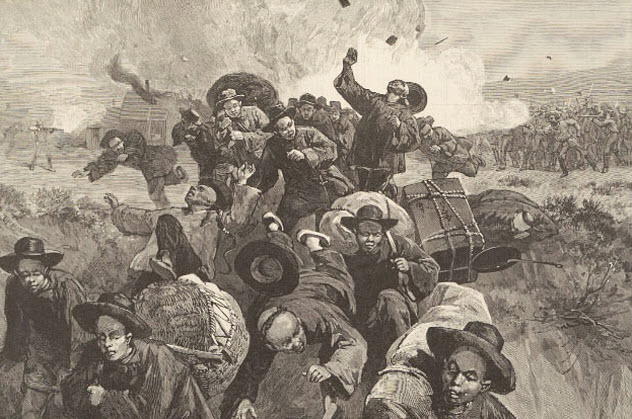 The Bridge Gulch Massacre against the Wintu tribe of northern California took place on April 23, 1852. Shortly before the attack, a man named John Anderson was killed, with his riderless mule returning to a nearby corral. Nearly 70 men set out after the perpetrators, who were reportedly members of the Wintu tribe, though they were of a different band than the ones who were brutally murdered.

Surrounding a part of the small valley known as Bridge Gulch, the men attacked early in the morning, shooting nearly every man, woman, and child they saw. Over 150 Native Americans were killed, and only two small girls survived. They were taken back to the town and “adopted” by white parents. 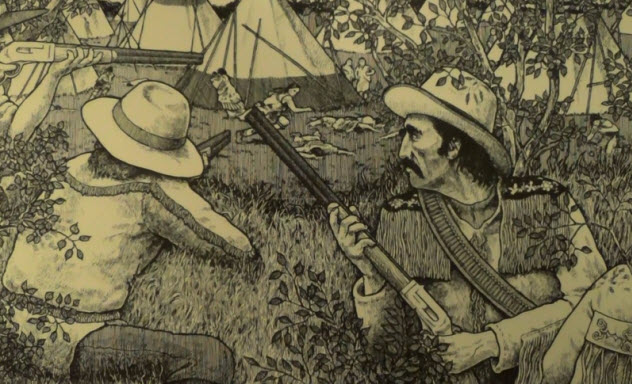 One of the driving forces behind the creation of the Royal Canadian Mounted Police, the Cypress Hills Massacre took place in 1873 in what is now Saskatchewan. People of the First Nations had occupied the territory for thousands of years. Meanwhile, Montana fur traders had recently set up trading posts in the area, with tensions rising as the traders’ stocks began to dwindle.

Eventually, some disgruntled wolf hunters arrived, tired from tracking another Native American tribe who were supposedly horse thieves. When another horse went missing, the Assiniboine tribe was blamed.

Canadian officials tried in vain to prosecute those responsible, managing to capture three of them while they were still in Canada. But they were acquitted due to a lack of evidence. 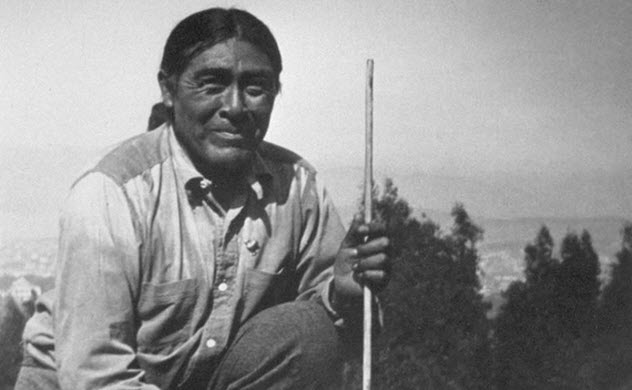 By 1865, the Yana tribe’s population had dwindled to fewer than 100 in northern California around Lassen Peak. After the murders of several nearby white people during a raid, hunters tracked the culprits to Three Knolls, where the Native Americans slept.

Determined to rid the area of any remaining natives, the settlers attacked, killing dozens of Native Americans. Only a handful escaped.

A Yana tribesman named Ishi was present at the massacre as a small child, and he and his family eventually hid in some nearby mountains for almost 40 years. 1n 1911, he emerged as a frail, elderly man—the last of his people—to tell his fantastical story. 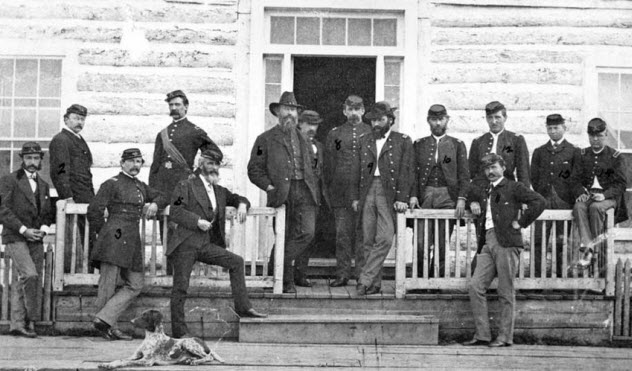 The deadliest massacre of Native Americans in Montana’s history was a mistake. Colonel Eugene Baker had been sent by the government to “pacify” a rebellious band of the Blackfeet tribe.

Eventually, Baker’s men tracked the tribe to a village along the Marias River. On January 23, 1870, the men surrounded the village and prepared to attack.

But a scout recognized some of the painted designs on the lodges and reported to Baker that this was the wrong band. Baker replied, “That makes no difference, one band or another of them; they are all [Blackfeet] and we will attack them.”

Most of the Native American men were out hunting, so the majority of the 173 massacred were women, children, and the elderly. When Baker discovered that the survivors had smallpox, he abandoned them in the wilderness without food or shelter, increasing the death toll by 140. 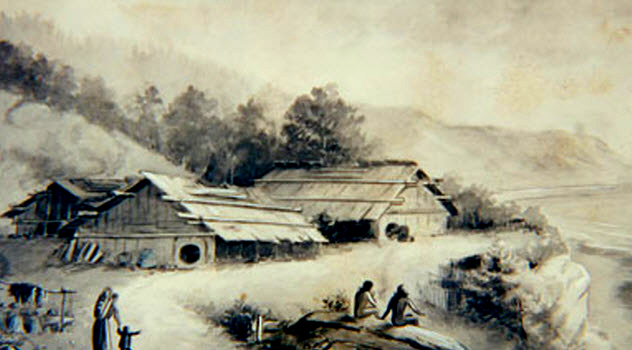 The Tolowa people laid claim to territories in northwestern California and southern Oregon that were continuously encroached upon by white settlers. By 1853, a “war of extermination” had been going on for a while, with settlers forming makeshift militias and slaughtering any Native Americans they encountered.

In the fall of that year, the Tolowa and other tribes came together to pray at Yontocket, the spiritual center of their universe, and to perform the world renewal dance. Unknown to them, a group of white people, led by J.M. Peters, was slowly creeping upon the camp.

Surrounding the Tolowa, the men began firing, indiscriminately slaughtering everyone in sight. Peters, who lost no men during the massacre, reportedly said that “scarcely an Indian was left alive.” By the end of the violence, hundreds of people had been killed. 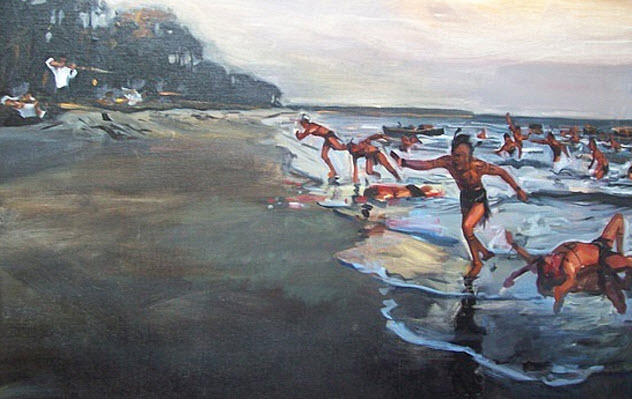 An island in Clear Lake, California, was renamed Bloody Island after the massacre of the indigenous Pomo tribe there in 1850. Thanks to severe mistreatment, including rape and murder, at the hands of white men who had taken various members of the tribe as slaves, the Pomo people attacked, killing two men and escaping to a nearby lake.

Captain Nathaniel Lyon, a soldier in the US Cavalry, and other men set off into the woods to find the offending tribe. The men discovered the hidden camp a short time later.

After failing to successfully reach the tribe, which had taken refuge on an island in the lake, the soldiers built a handful of boats, loaded them with cannons, and attacked. From 100 to 400 Native Americans were killed.

A local newspaper originally declared the massacre to be tantamount to state-sponsored genocide but reversed course four days later, calling it a “greatly exaggerated” story. 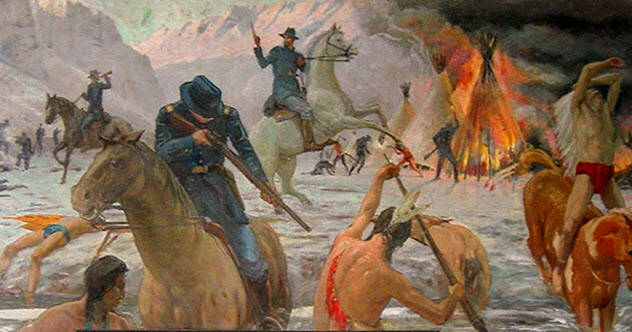 Perhaps the deadliest massacre of Native Americans in US history, the Bear River Massacre has remained in obscurity largely because it occurred during the Civil War. The Northern Shoshone called present-day southeastern Idaho home, and it was there that they were attacked.

Mormon settlers had been progressively taking more land from the Native Americans, appropriating nearly all of the arable territory. Striking back at those stealing their land, the Shoshone soon saw themselves in the crosshairs of Colonel Patrick Connor and 200 California Volunteers, who vowed to take no prisoners.

At daybreak on January 29, 1863, the soldiers attacked, brutally killing nearly 250 Native Americans. They raped any women who hadn’t been killed, used axes to crush the skulls of the wounded, and set fire to all the lodges.