Disturbingly enough, massacres have been committed throughout human history and across the world. Evidence of this can be found during archaeological excavations as mass graves are sometimes well-preserved.

Ancient texts can also provide detailed information on past atrocities. Together, this shows the dark side of human nature and the horrors that may result from it. 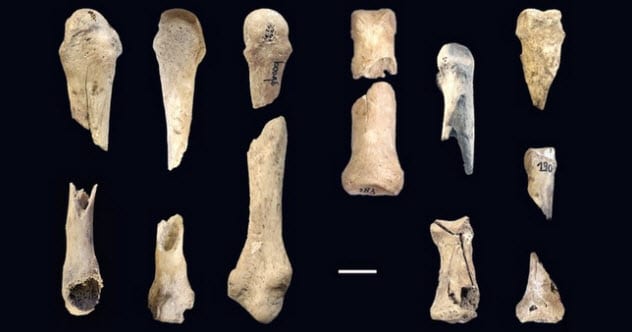 Among 60 Neolithic pits discovered near Bergheim, France, 14 contained human remains. One of these stood out from the rest with its morbid collection of severed limbs. The pit had severed arms, hands, and fingers from at least seven different people, including one teenager, dating to 5,335 years ago. All the bones had marks indicating they had been cut off with a knife or axe.

Underneath this were the remains of a man missing an arm, and on top of the severed limbs were the complete skeletons of seven other people consisting of two adults, four children, and one infant. A while later, 5,245 years ago, the body of a woman had been placed above these individuals.

However, these remains showed no evidence of violent trauma, just like the human remains found in the other pits in the area. As the severed remains were the only ones covered in injuries and were deposited at the same time, researchers think they are the result of warfare or armed conflict and that they were all killed in the same event.[1] 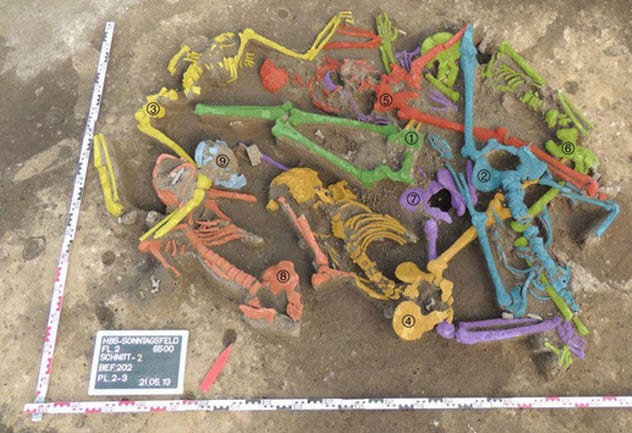 A grave containing nine skeletons was discovered near a known Neolithic settlement in Halberstadt, Germany. The settlement was part of the Linearbandkeramik culture dated to 5500–4900 BC, the first full-time farmers in Central Europe.

As most graves from the period consist of individual inhumations with the occasional cremation, this mass grave stood out. The grave consisted of seven adult males, one young adult female, and one probable teenage male. There were no grave goods, and the skeletons seemed to have been thrown into the grave as they were positioned in a disorderly fashion.

Seven of the skeletons had well-preserved skulls, revealing that each had at least one injury to the cranium from a blunt force trauma. One individual had at least two such injuries, while another had at least five.

All the injuries had been sustained at around the time of death and were likely the cause of death. Isotope analysis of six of the skeletons revealed that five of them were immigrants, having moved to the area not long before death.

Carbon and nitrogen isotopes also revealed that their diets were very different from that of the locals. Researchers thus believe that the nine were potentially immigrants who were executed and dumped into a mass grave.[2] 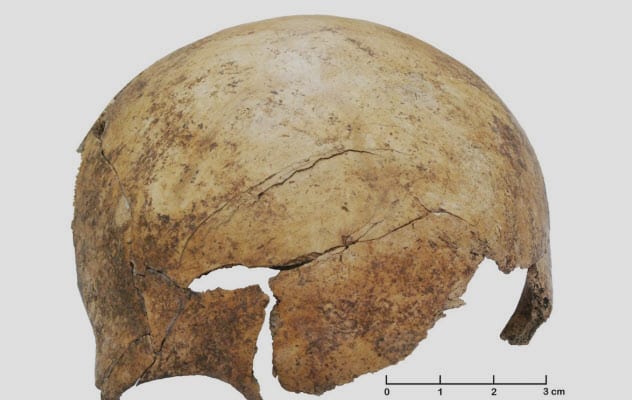 Yet another massacre from the Linearbandkeramik culture in the Neolithic was discovered in Schoneck-Kilianstadten, Germany, in a 7,000-year-old grave. It contained the remains of at least 26 people. Most of them had signs of blunt force trauma to their heads, and many had had their lower legs broken around the time of death.

As there was such a large group of people in one grave (at a time when people were usually buried separately), no grave goods (which were highly common at the time), and a high rate of violent injuries, this is believed to have been the result of a massacre which would have decimated the village.

Half the individuals were children, but there were no teenagers. Of the adults, only two were female. Thus, women and teenagers may possibly have been taken as captives or they may have managed to escape.[3] 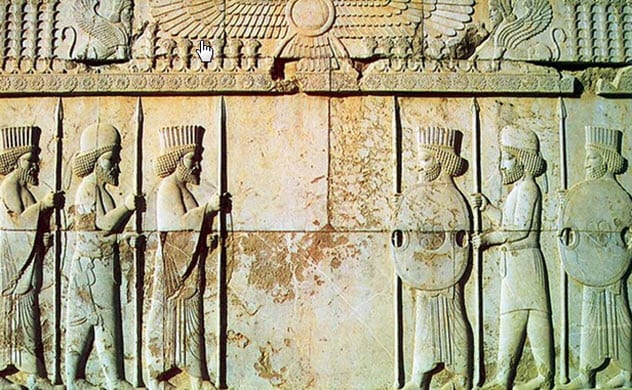 Shockingly enough, an annual holiday in the Persian Empire was a celebration of a genocide committed against the Magi, a group of people living in Media (which is now in modern-day Iran). They were conquered by the Persian king Cyrus the Great in 549 BC.

Although they followed a different type of Zoroastrian religion and had many norms and beliefs that differed from the Persians, the Magi found their place in the new land. Most of them became priests and took up important positions in society.

However, in 522 BC, 27 years after they were conquered, the Magi were brutally massacred by decree of Darius I. He claimed that Cyrus the Great’s son, Cambyses, had gone crazy and sent an assassin to kill his brother, Smerdis, who was next in line to the throne. Then Cambyses accidentally killed himself by falling on his sword.[4]

Supposedly, the Magi leaped at the opportunity and put an impostor on the throne, pretending that he was Smerdis so that they could rule. Darius I gathered his men and stormed the castle, beheading the supposed impostor and any other Magi present. The king’s men then ran into the streets and ordered everyone to grab any weapons and kill any Magi they could find. The people obliged and spent the rest of the day hunting down the Magi.

For years afterward, the Slaughter of the Magi was an annual holiday in Persia where people feasted and celebrated. On this day, any surviving Magi had to stay in their houses. If found outside, they could be freely beaten and left to die. According to historians, Darius I most likely made up the story of a king-impersonator as an excuse to take over the throne himself. 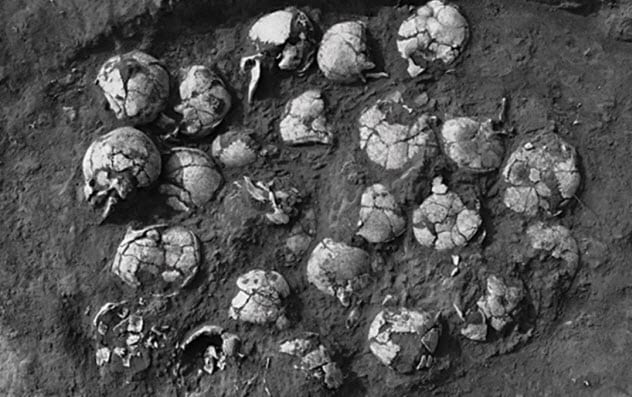 In China, a massive step pyramid from around 2300 BC was recently excavated, leading to the discovery of six pits containing decapitated human heads. The pyramid is 70 meters (230 ft) high with 11 steps. At the time of its use, it was surrounded by a giant city, named Shimao in modern times.[5]

On top of the pyramid, there was a large residential complex for the city’s elite and an area for craft production. The skull pits were discovered below the pyramid and may have been a building sacrifice.

The skulls most likely belonged to people from the neighboring city of Zhukaigou. They may have been captives from an expansion of Shimao who were sacrificed to show the power of their conquerors. All the skulls belonged to young females, but further information has not yet been revealed. 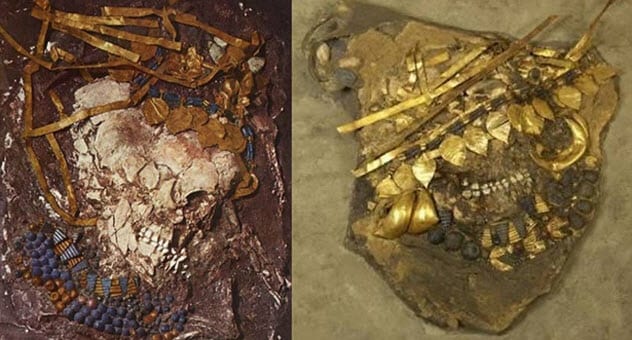 In Ur in ancient Mesopotamia, six burial pits were discovered and named “death pits.” Most of these consisted of a single burial of a high-status individual. However, one stood out. It was named the “Great Death Pit” as it contained 74 individuals, six males and 68 females.

One of the females had a highly intricate headdress that was much more elaborate than the simple headdresses worn by all the others buried there. She also wore expensive jewelry. Due to this, it is believed that the other 73 individuals were sacrificed when she died and then buried to accompany her in the afterlife. It is unknown whether this was voluntary or not.[6] 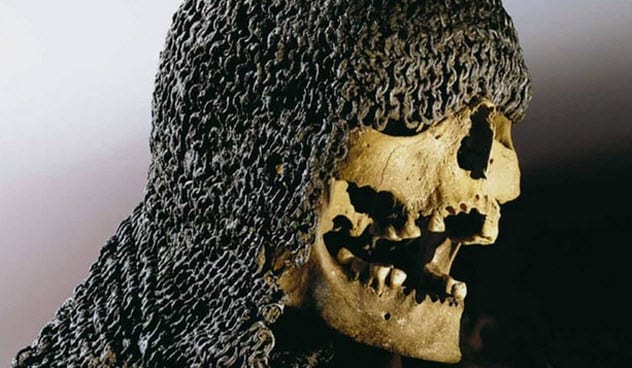 Throughout history, massacres have commonly resulted from battles during wars. The excavated mass grave from Visby, Sweden, is a vivid example of such warfare.

Visby is located on the island of Gotland, which was an important medieval trading spot. King Valdemar IV of Denmark sent a large army to attack the island in AD 1361, both to gain their wealth and supposedly as a personal vendetta as the inhabitants were said to sing rude drinking songs about him.

As the Danish army was made up of highly skilled mercenaries and the Swedish army consisted of untrained men, the residents of Gotland were brutally massacred. The bodies were buried in several mass graves that were excavated in the 20th century.

The graves revealed that a third of the defenders were children, elderly, or crippled.[7] The bodies were also buried wearing their armor and carrying their weapons. Some even had weapons from the attackers still inserted in their bodies. As the remains are so well-preserved, these graves are a unique discovery. 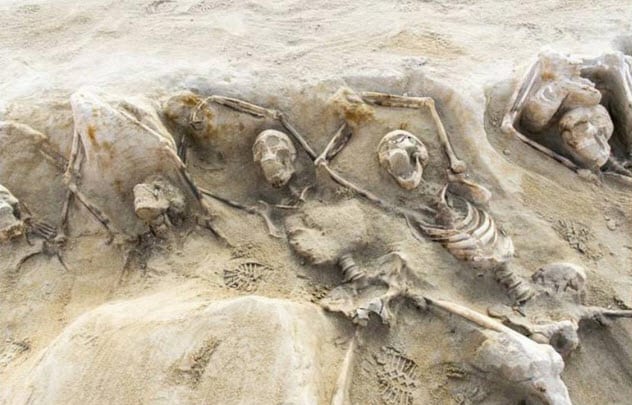 During the excavation of a large cemetery from the ancient city of Phaleron near Athens, Greece, a mass grave was discovered. The cemetery contained around 1,500 burials from the eight to the fifth century BC.

The mass grave was made for 80 individuals and stands out as 36 of them were shackled with their arms above their heads. This grave is dated to 650–625 BC based on the pottery shards found within it.[8]

Due to the date of the grave and the way the people were buried, piled together, and bound, it has been speculated that they were rebels from the revolt in 632 BC. At this time, a former Olympic champion, Cylon, had raised a group of people to try to take over Athens.

However, when he failed, Cylon escaped and left the rest of his group to be captured. Though the story matches the grave, there is presently no way to say for certain that this was Cylon’s group of rebels. 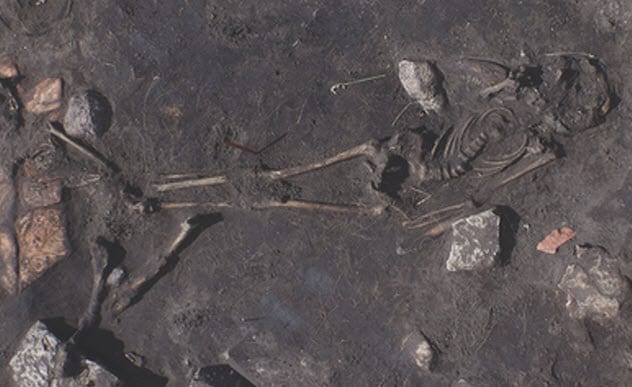 A partial excavation of a ringfort at Sandby borg on the Swedish island of Oland revealed a potential massacre of its inhabitants in the fifth century AD. The fort is made up of an oval wall surrounding over 50 houses.

Only a handful of houses have been excavated. But so far, they have revealed over two dozen human remains, an unusually high number for such a small excavation.

The individuals are spread out across the houses and the roads. Some are articulated, and some are disarticulated. Two discovered in the same house were partially charred, indicating that there was a fire for unknown reasons.

Several of the skulls, one individual’s shoulder, and another person’s hip have blunt force trauma. All the injuries are on the back or side of the bodies indicating that the people were fleeing rather than fighting back. All the individuals whose sex could be determined are males, so women may have either been spared or taken as captives.[9] 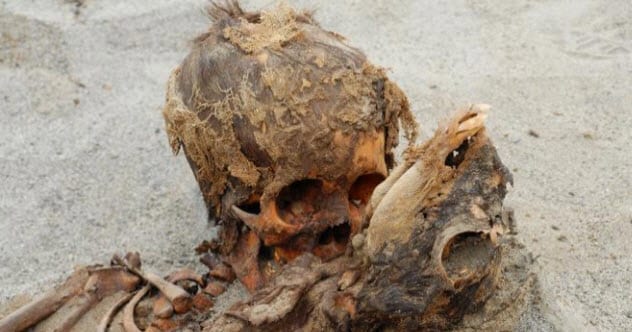 The largest child sacrifice discovered so far is located on the northern coast of Peru and was committed by the Chimu Empire somewhere between AD 1400 to 1450. On a bluff near the ocean, 140 children and 200 llamas were discovered.

The children were 5–14 years old, with most aged 8–12. They had a red pigment made from cinnabar smeared on their faces. Their chests had been cut open at the time of death, potentially to cut out their hearts, and they were mostly buried facing west toward the ocean. The llamas were all juveniles, 18 months old or less, and most of them were buried facing east toward the Andes.

There were also three adult humans buried nearby. They all had blunt force trauma to the head and were buried without grave goods. All the burials are believed to have been from a single event.

Footprints were also preserved from the time, showing adults, children, young llamas, and dogs moving around. They indicate that the children were brought in from the north and south and met in the middle of the bluff for the sacrifice. DNA analysis reveals that both boys and girls were sacrificed, and isotopic analysis indicates that the children came from all over the empire.[10]