Archaeology can be a frustrating pursuit. Getting objects out of the ground is only the first step. Understanding what they are, how they were made, and how they were used can be baffling. Sometimes, the only way to work things out is to try them for ourselves. This is called experimental archaeology, and here are 10 of the most amazing examples of it.

SeaTrials of the Trireme Olympias

Ancient Greek triremes were the ultimate sea weapon of the Mediterranean. Fast and agile, they could travel long distances under sail or deploy oars and fight at close quarters. Images of the ships abound in carved reliefs and descriptions of naval battles. But there was long debate over exactly how the triremes’ most distinctive features, the three banks of oars for which it is named, were deployed. The conditions were definitely cramped for the rowers (Aristophanes the comic poet describes the scene of the rowers packed in—“Fart(ing) in the face of their rowing mate“), so just how did they work the oars together?

To settle the matter, experimental archaeologists built a full-size trireme. Crewed by enthusiasts. the ship was put through its paces over several years. Given just a small-time of training, they achieved speeds of 9 knots and rapid 180 degree turns. Given a properly trained crew, a fleet of such ships would have been truly formidable. 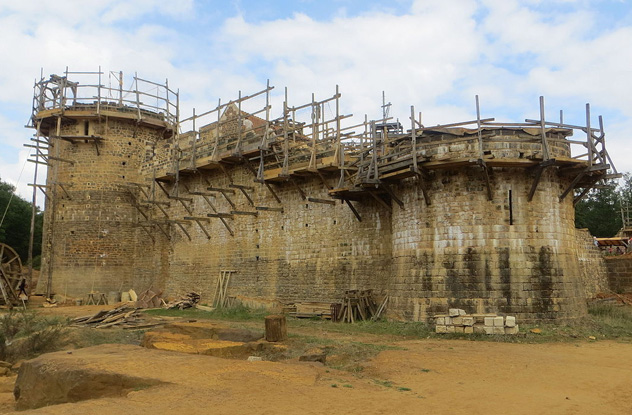 How hard can building a castle be? Surely you just pile stones one on top of another until you have something sufficiently defendable. The number of skilled laborers required to build a castle, however, was staggering. Stone masons are just the most obvious. To understand fully how a castle could be constructed, a team of experimental archaeologists has set out to make one using only techniques available at the time.

Guedelon Castle is a faithful reconstruction of a castle started in 1998. The project has revealed much about castle building. The mortar used quickly makes the castle unsightly with stains, which would explain why castles used to be plastered and painted. 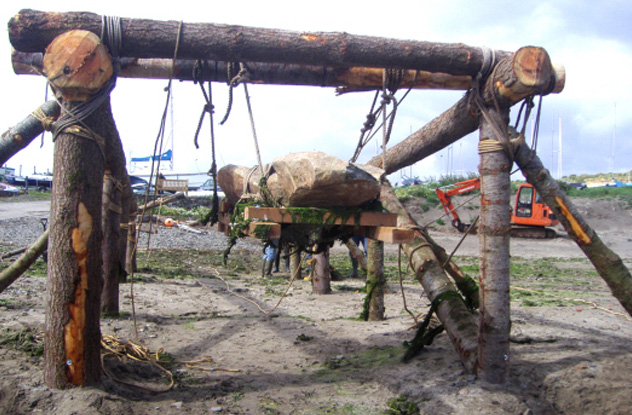 How did ancient people move huge blocks of stone weighing many tons? They could not have loaded them onto wagons, as they lacked even the simple technology of wheels.

In 2010, a student noticed how closely in size certain carved balls found near sites of monoliths were and decided they must have been used together. By inserting replicas of the balls into wooden tracks, the transport of the stones became relatively simple.

However, that explanation wouldn’t work in the case of Stonehenge, one of the best-known ancient sites in the world. The stones used to create it were quarried 260 kilometers (160 mi) away. To transport them by rollers that distance would have been a monumental effort—greater, in fact, than building the monument itself.

In 2012, a simple method of loading the stones onto a replica of Bronze Age boat was demonstrated using just a few logs. Moving them by sea and river would have been relatively easy compared to hauling them over hills and through forests. 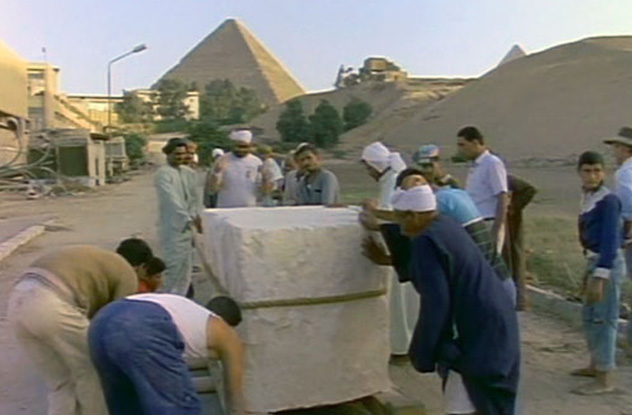 The Great Pyramid of Giza was the tallest man-made structure for 3,800 years. The amount of stone used to construct just that one pyramid is over 2.5 million cubic meters (91 million ft3). And there are more than 100 Egyptian pyramids in total. How were they built? It used to be thought that it was all a matter of many slaves making light work. Now, it is believed it was a workforce of free men. Still, the question remains as to how they did it.

A NOVA documentary showed how few men (1,200) it would take to quarry the necessary stone. Since most of the stone was sourced locally, no grand transport was needed. Their experiments allowed them to move a 1.5-ton stone with just 12 men. They estimate that just 5,000 men could build the Great Pyramid in 20–40 years. 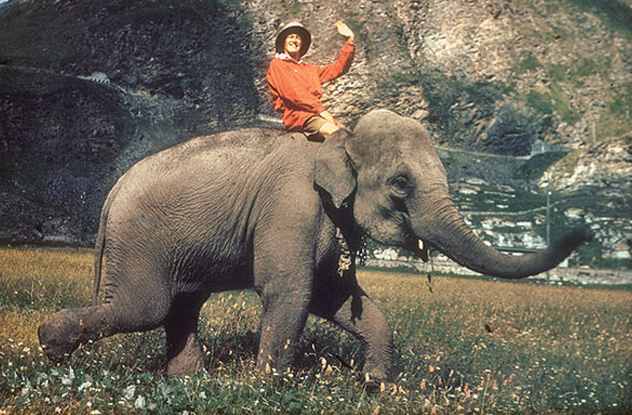 In 218 BC, Hannibal invaded Italy by crossing the Alps with 45,000 men and 37 war elephants. That much is known to history. The route used by the invader, however, is a matter of debate. In 1959, John Hoyte decided to try the crossing for himself. And he did not forget to pack an elephant.

Jumbo the elephant was lent to him by Turin zoo. The first route they tried proved impassable, and they were forced to take another possible route—the same followed by Napoleon when he crossed the Alps 2,000 years after Hannibal. In just 10 days, they reached Italy. Jumbo had lost a total of 250 kilograms (500 lb) but was otherwise in good shape.

In 1985, experimental archaeologist Marcus Junkelmann crossed the Alps in the other direction with a team dressed in authentic Roman army gear. They managed the march from Verona to Augsburg in a month. 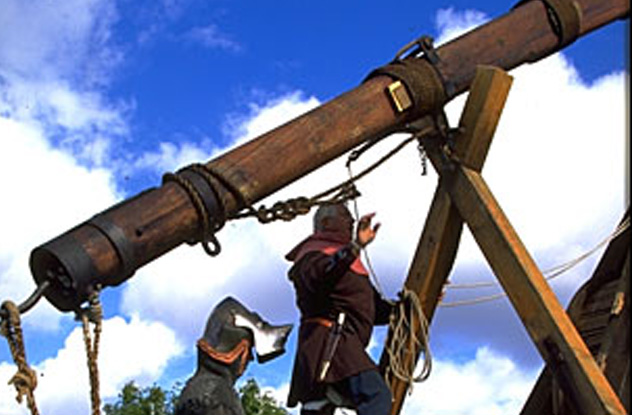 The Middelaldercentert (“Medieval Center”) in Denmark is an entire site dedicated to experimental archaeology of the Middle Ages. They were the first group to reconstruct a trebuchet, a type of catapult, in modern times. It is capable of hurling heavy projectiles hundreds of feet. So far, it has fired 10,000 times without requiring major repairs.

Other reconstructions there include a medieval church and the oldest cast iron cannon, fired with gunpowder made from scratch. They also take inventions that were designed in the medieval period but never built. They have made a tank, car, and perpetual motion device from ancient texts. Shockingly, none of these reconstructions work yet. 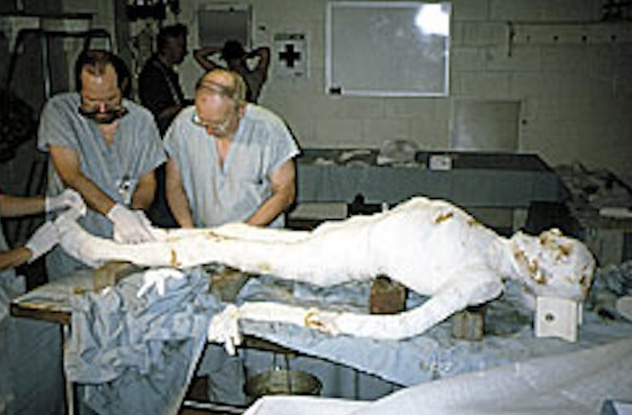 Egyptian mummies were meant to propel the dead into immortality by preserving their mortal remains. In a sense, they worked, as mummies remain the most enduring image we have of the ancient Egyptians. The methods used by the embalmers were described in ancient texts. Not all the techniques were set down, and much is unknown. Much of what is known is not fully understood.

Bob Brier set out to create a modern mummy to elucidate the steps used in the ancient world. When a man died of a heart attack, he took the body and subjected it to the processes described by the ancients, using only tools and chemicals found in the ancient world. Years later, the body remains in the (slightly mangled though well-preserved) condition it achieved after mummification. 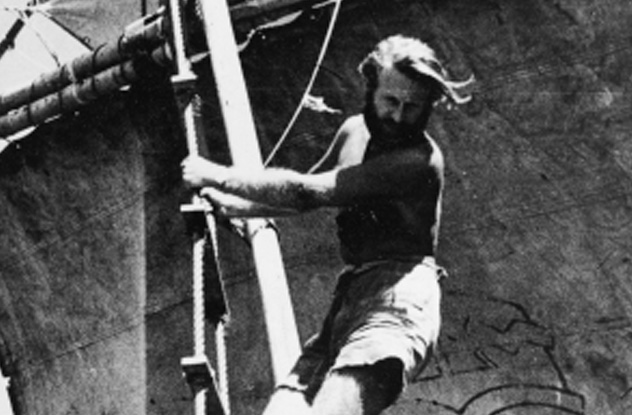 Thor Heyerdahl studied the people, flora, and fauna of the Polynesian islands. His research led him to question the prevailing theory of how people came to live there. While most thought people traveled out of the East, Heyerdahl believed they sailed from South America.

Going to South America, he traveled into the rain jungles and cut down Balsa trees, floating them down river to the sea. On the coast, he constructed a raft using only simple techniques. Then, with his crew, he set sail eastward. Though the parrot they took along perished, the humans survived the 101-day journey to Polynesia, well-fed on fish they caught along the way and crabs that infested the vessel. Heyerdahl proved the ancients could have made the voyage, though it still remains controversial as to whether they actually did. 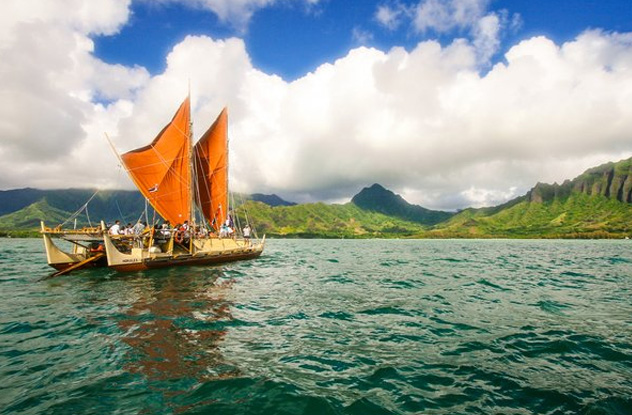 One problem with the Kon-Tiki was that it was practically impossible to steer. Heyerdahl saw no problem with this, as he saw the spread of humans across the Pacific as simply a matter of drifting on currents. Others disagreed.

The Hokule’a is a double-hulled canoe launched in 1976 to prove navigation was key to crossing between islands. The 4,000-kilometer (2,500 mi) journey from Hawaii to Tahiti in 1976 was a success, but it relied on using a navigator from Micronesia, as the skill required no longer existed in Polynesia. Able to navigate by the stars and read ocean swells he guided the ship safely between the islands. Once, he was able to tell the ship was off-course simply by the way the ship was riding swells.

According to some sources, Archimedes turned his great mind to creating terrible weapons when his home of Syracuse was besieged by the Romans. He is supposed to have created a claw capable of picking ships out of the water and sinking them. A series of mirrors is said to have focused the rays of the Sun on ships until they burst into flames.

The sources are sketchy on how exactly the devices used worked. Archimedes was a master of levers, pulleys, and buoyancy. If anyone could sink a ship with a claw, it would have been him. Any ship approaching the harbor walls could have been grasped and dragged over. A BBC documentary showed that such a mechanism was feasible (if difficult to use) by building one.

An MIT class used 127 1-square-foot mirrors to direct the Sun on a mockup of a Roman ship. After 10 minutes, the wood of the ship caught fire. It must be noted that this was with brilliant sunlight, a stationary target, and no sea water to dampen things. Could Archimedes have made it work? More experiments seem to be needed.