When NASA announced the discovery of flowing water on Mars, it was a big deal. Since then, we’ve made many more discoveries that have mostly gone under the radar of the general public. Currently, we have two rovers and three orbiters exploring Mars with another two on the way. We are constantly finding out new things about our red neighbor or confirming previous ideas. Impactite is a type of rock created from a meteorite impact. It is often a mixture of various rocks, minerals, glass, and crystals formed through shock metamorphism. Popular sources of impactite on Earth include the Alamo bolide impact site in Nevada and Darwin Crater in Tasmania. Last year, NASA found new sources on Mars.

The next step would be to obtain a sample of Martian impact glass. Hargraves Crater, one of the sites with glass deposits, is among the landing site candidates for the 2020 rover. This new discovery should make it a front-runner. In September 2014, the Mars Atmosphere and Volatile EvolutioN (MAVEN) spacecraft entered Mars’ orbit. Just a few weeks later, the probe witnessed a rare event when a comet did a very close flyby of the Red Planet.

Scientists were interested to see the effect of such a close flyby on a planet. Because Mars has a weak magnetosphere, the planet was flooded with a layer of ions as the comet’s potent magnetic field overwhelmed that of Mars. NASA compared the effects with those of a powerful but short-lived solar storm. As the comet’s magnetic strength intensified, Mars’ magnetic field was plunged into total chaos, at times flapping “like a curtain in the wind.”

8 Mars Has A Mohawk In 2013, the MAVEN spacecraft was launched with the goal of studying Mars’ atmosphere. Based on observations made by the probe, computer simulations reveal that the planet sports a pretty trendy “Mohawk.”

Mars’ sweet hairstyle is actually comprised of electrically charged particles being blasted away by solar winds from the planet’s upper atmosphere. The electrical field created by the incoming solar wind, as well as other powerful solar events like coronal mass ejections and solar flares, can direct the particles at either pole. This creates a polar plume of escaping ions which bears a resemblance to a “Mohawk.” If humans are ever going to inhabit Mars, then we will need to develop methods of feeding colonists on the Red Planet. According to scientists at Wageningen University, we already have access to four vegetables and cereals which should be safe to grow and eat in Martian soil.

Those four crops are tomatoes, radishes, rye, and peas. Dutch scientists have been growing them in Mars-like soil developed by NASA. Although the soil contains high levels of heavy metals such as cadmium and copper, the food grown in the soil didn’t absorb enough to constitute “dangerous levels.”

The four crops are part of an ongoing experiment that will look into the viability of six other foods as potential Martian crops. The study is backed by Mars One, a project currently selecting candidates for a manned mission to Mars within the next 10–15 years. Rovers and probes have been studying Martian dunes for a while now, but recent images taken by the Mars Reconnaissance Orbiter have somewhat puzzled scientists. In February 2016, the spacecraft highlighted a region that showed complex dunes with shapes reminiscent of dots and dashes used for Morse code.

Current thinking says that a nearby depression, likely an old impact crater, limited the amount of sand available for dune formation which led to their unusual shapes. The “dash” dunes were formed by winds coming in at right angles from two directions, creating their linear form.

The origins of the smaller “dot” dunes are more of a mystery. Typically, they appear when something interrupts the formation of linear dunes. However, scientists are not sure exactly what that “something” involves and hope that further study of the area will help them understand the process better. A region of Mars explored by the Curiosity rover in 2015 is raising a lot of questions for NASA scientists. Known as the “Marias Pass,” the area is a geological contact zone where a layer of sandstone sits atop a bed of mudstone.

The region has an exceptionally high concentration of silica—up to 90 percent in certain rocks. Silica is a chemical compound found in rocks and minerals on Earth, primarily quartz.

According to Curiosity team member Albert Yen, standard processes for boosting silica concentration involve either dissolving other ingredients or bringing more silica from another source. Either way, you need water, so uncovering the processes will give us a better view of ancient, watery Mars.

Scientists were even more surprised when they took a rock sample. They actually stumbled on a mineral called tridymite, a first for Mars. Although tridymite is incredibly rare on Earth, there are huge quantities of it in the Marias Pass and we’re not sure how it got there. 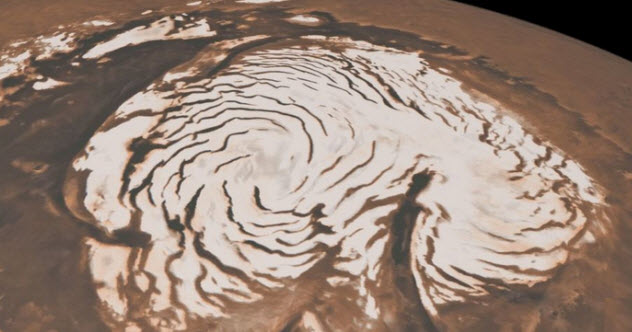 There was a time when the famed Red Planet would have actually been more white than red. According to astronomers at the Southern Research Institute in Boulder, Colorado, this is because Mars underwent a relatively recent ice age more extreme than anything we’ve seen on Earth.

The team reached this conclusion by observing the layers of ice at the Martian north pole. On Earth, scientists would dig through the ground, pull out a long tube of ice, and carefully study each layer. As this wasn’t possible on Mars, astronomers used the Shallow Subsurface Radar aboard the Mars Reconnaissance Orbiter.

With the help of ground-penetrating radar, astronomers saw 2 kilometers (1.2 mi) deep into Mars’ icy crust and formed a 2-D cross section which showed the planet had an intense ice age 370,000 years ago and should expect another one in 150,000 years. 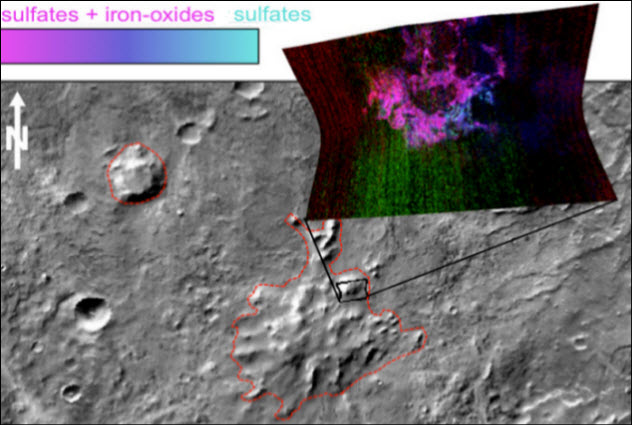 Usually found in igneous rock, the newly discovered tridymite points to heavy volcanic activity in Mars’ past. New evidence from the Mars Reconnaissance Orbiter also suggests that Mars once had volcanoes that erupted under ice.

The probe studied a region of the Red Planet known as Sisyphi Montes. It is full of flat-topped mountains which are similar in shape to Earth volcanoes that erupted underneath ice.

When an eruption occurs, it is usually powerful enough to punch through the ice layer and shoot large quantities of ash into the air. This also leaves behind a distinct trail of minerals and other compounds, giving subglacial eruptions a unique signature that was also found at Sisyphi Montes. 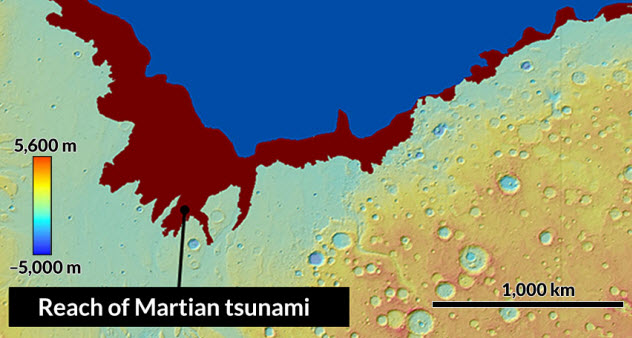 Scientists are still debating whether the Red Planet once had a northern ocean. However, new research indicates that the ocean did exist and was decimated by huge tsunamis that make most of their Earthly counterparts pale in comparison.

Until now, the evidence pointing to an ancient ocean consisted of the remains of a shoreline which wasn’t present everywhere it should have been. If these mega tsunamis existed, they could have wiped away part of the shoreline.

Alexis Rodriguez, one of the proponents of this new idea, says the waves would have been up to 120 meters (394 ft) high and occurred as often as once every three million years. Rodriguez is particularly interested in studying craters near the shoreline. They would have been drenched by tsunamis and trapped water for millions of years, making them ideal places to search for signs of ancient life.

1 Mars Had More Water Than The Arctic Ocean 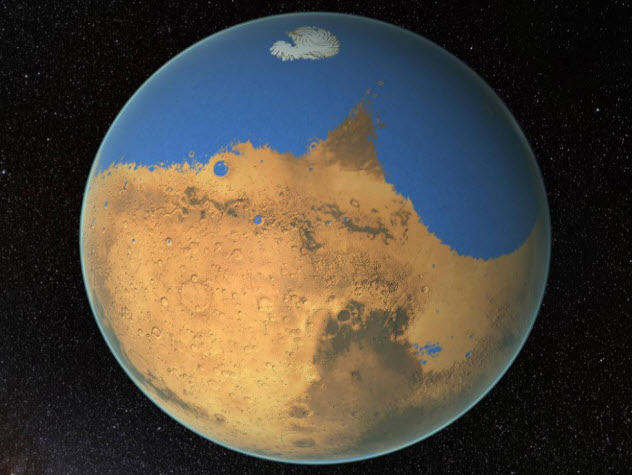 Although the location of Mars’ ocean is up for debate, scientists agree that the Red Planet used to have a lot of water. NASA suggests that Mars once had enough water to completely cover the planet’s surface in one giant ocean 140 meters (450 ft) deep. However, that water was likely concentrated in an ocean bigger than Earth’s Arctic Ocean and occupied roughly 19 percent of Mars’ surface.

These estimations come courtesy of observations made by the W.M. Keck Observatory in Hawaii and the Very Large Telescope in Chile. Mars’ atmosphere currently has two forms of water: H2O and HDO, where a normal hydrogen molecule is replaced by deuterium, a hydrogen isotope.

Scientists measured the ratio between H2O and HDO present on Mars today and compared it to the water ratio from a 4.5-billion-year-old Martian meteorite. The results indicate that Mars lost 87 percent of its water content to space.