Life, in various ways, leaves its mark upon the dead, just as it does upon the living, as these ten bizarre skeletons attest. 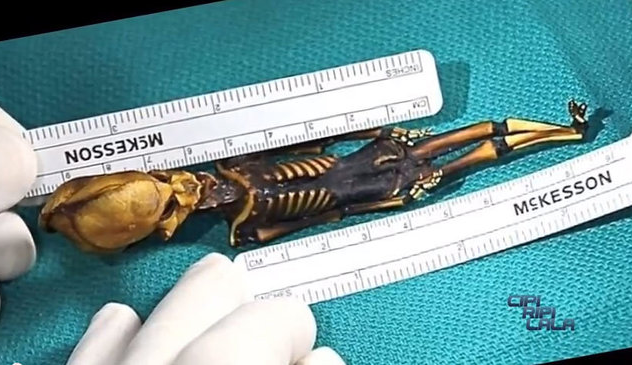 When a strange, 15-centimeter (6 in) skeleton in Chile’s Atacama Desert was unearthed in 2003, conspiracy theorists insisted that the bones were those of an extraterrestrial. The elongated skull and the number of ribs (10 rather than 12) weren’t anything like those of a human being. Others held the opinion it was the skeleton of an aborted fetus or a primate. However, scientists confirmed the skeleton to be human.

The elongated head could have resulted from deliberate skull deformation, widely practiced 1,000 years ago in Central America. No one is sure how old the skeleton is, however, although researchers believe that death occurred “at least a few decades ago.” Another possibility concerning the deformed skull is turricephaly, or high-head syndrome, a birth defect that leaves the top of the skull cone-shaped.

Then there’s the skeleton’s stature. Its DNA indicates a child between six and eight years old, but it’s only 15 centimeters long. How could a child of such an age have been so tiny? Dwarfism doesn’t seem to account for the discrepancy between its age and size.

Also odd is the fact that nine percent of the skeleton’s genes don’t fit into the human genome. This could be due to degradation of the DNA, distortion of results by lab preparation, or insufficient data, though. Nevertheless, enough unanswered questions remain to make this bizarre skeleton a true enigma. 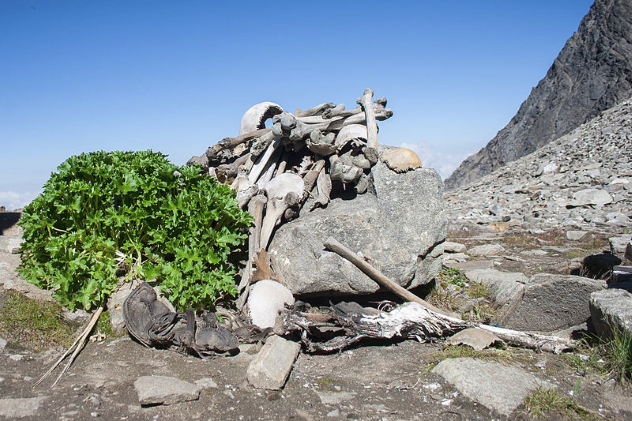 In Uttarakhand (a state in India) at an altitude of 5,000 meters (16,400 ft) in the Himalyas, as many as 600 skeletons are buried in Roopkund Lake (aka Skeleton Lake). The bones date from the ninth century to the 15th century. Among them are both a group of short skeletons and a group of tall ones.

A centuries-old local legend claims that the remains include those of King Jasdhawal, whose disobedience during a pilgrimage with his queen and royal entourage angered the Hindu goddess Mata. To gain revenge, she and a local deity named Latu created thunderstorms and avalanches, raining gigantic hailstones on the king and his army.

The legend may contain a grain of truth, for scientists say it’s possible that the skeletons’ cracked skulls were struck by hailstones, and the party died in a blizzard or other natural catastrophe. The group may have been pilgrims participating in the Nanda Jaat Yatra, which is a religious journey held every 12 years. 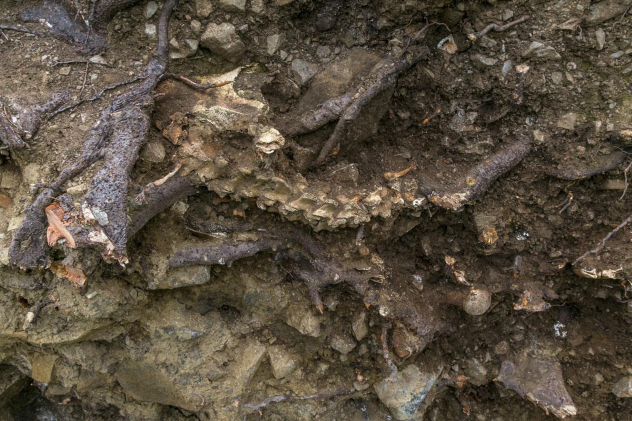 A strange skeleton was found inside the roots of a 215-year-old beech tree in Collooney, Sligo, Ireland, after the tree toppled in a storm, disclosing the skeleton, “trapped in its roots.” The bones 900 to 1,100 years old and are those of a male aged 17 to 21.

Marion Dowd, the director of the Sligo-Leitrim Archaeological Services, determined that the individual died a violent death. Knife wounds in the skeleton’s chest indicate that the person was stabbed to death. He put up a fight, however, as indicated by a defensive stab wound in the left hand. Evidence suggests the victim was a Christian: His head pointed west, and records indicate that a church and cemetery once existed nearby.

The victim was probably buried by friends or family. Then, years later, the tree was planted, and its roots eventually encompassed the buried victim. The strange presence of the skeleton in the tree’s roots is pure coincidence; the tree was planted by someone who had no knowledge of the body which lay beneath. 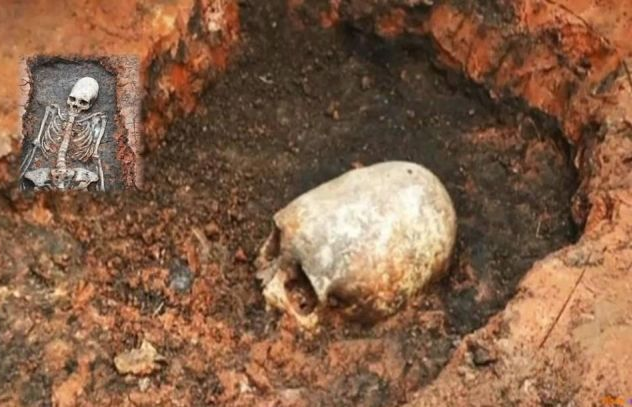 A supposedly alien skeleton with an elongated skull was found at Arkaim, the “Russian Stonehenge,” near Chelyabinsk in central Russia. Ufologists believe that the remains are those of “a humanoid figure” similar to Peru’s 3,000-year-old Paracas elongated skulls. DNA analysis of Peruvian skulls suggested that they may not have been human.

However, researchers believe the skeleton discovered in Russia is that of a Sarmati woman. Although not extraterrestrial in origin, her remains are older than the Paracas skulls by 1,000 years. Her skull is elongated, scientists think, because of head-binding. 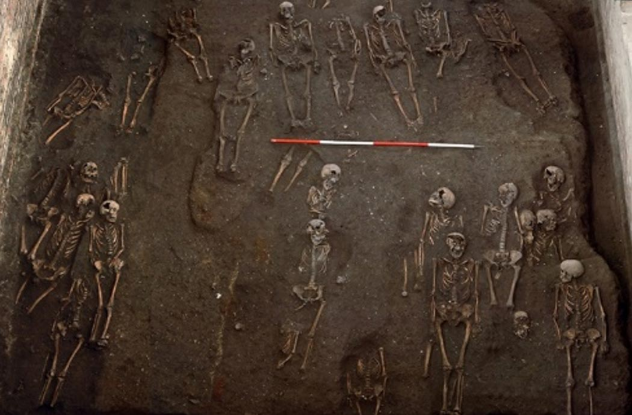 Archaeologists have discovered 92 nuns’ skeletons at Littlemore Priory in Oxfordshire. Their remains are associated with the perverse, violent, and sexual behavior that occurred within the nunnery’s walls.

The priory was established in 1110. Cardinal Wolsey dissolved it in 1525, when its prioress was punished for her obsessive “sins.” Significantly, the nuns’ bones were not interred within the nunnery, a place of honor which would normally include them. Instead, they were found in the priory’s cemetery. One of the women was buried face-down next to a stillborn baby in a casket, probably as penitence for her sins. She might have been one of the nuns whose behavior “provoked Cardinal Wolsey into dissolving the priory and pensioning off the prioress.”

Back in the 16th century, it was discovered that both the prioress, Katherine Wells, and another nun had illegitimate children. In addition, Wells later admitted to physically abusing nuns whom she claimed misbehaved. It’s possible that one of the nuns may have disposed of an unwanted infant by dropping it into the privy. A woman who was considering becoming a nun was so scandalized by the nuns’ wanton ways she left.

Wells was also found guilty of stealing from the nunnery to finance a dowry for her daughter. Her child’s father, a priest, visited the mother and child regularly at the priory. The father of the other nun’s child was a married Oxford man. According to Wells, sexual liaisons between nuns and men who lived near the priory, her own violent behavior toward the nuns, and her thefts from the nunnery had been happening for eight years. 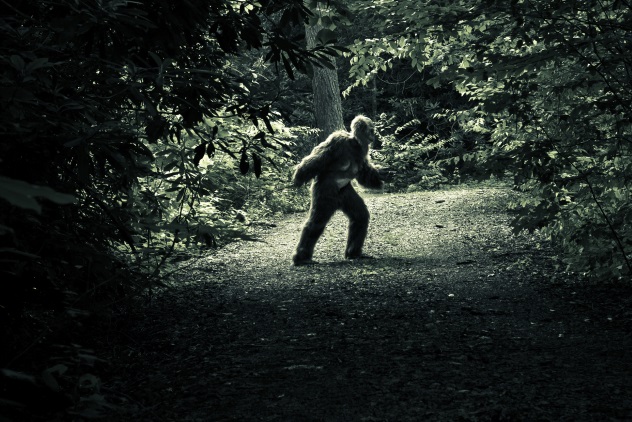 If Bigfoot exists, then dead ones must inevitably leave skeletons behind. Yet, to date, none have ever been found or preserved. Other supposed remains have turned out to be of known animals.

Bigfoot bones were supposedly collected after the eruption of Mount St. Helens, but the National Guard allegedly destroyed them along with the other animal bones that were collected. A Bigfoot jawbone is said to have been lost in a residential fire. A college allegedly dismantled a Bigfoot skull before returning its bits and pieces to its finder. Museums have supposedly lost specimens. A good many other Bigfoot bones also allegedly have been misplaced, lost, or destroyed in various ways over the years, according to believers.

Nature itself also seems to conspire to dispose of Bigfoot skeletons. The bones are devoured by animals in short order. Even microbes and ants help to destroy what’s left. Despite claims of an abundance of Bigfoot bones and skeletons, scientists remain unconvinced of the creatures’ existence. 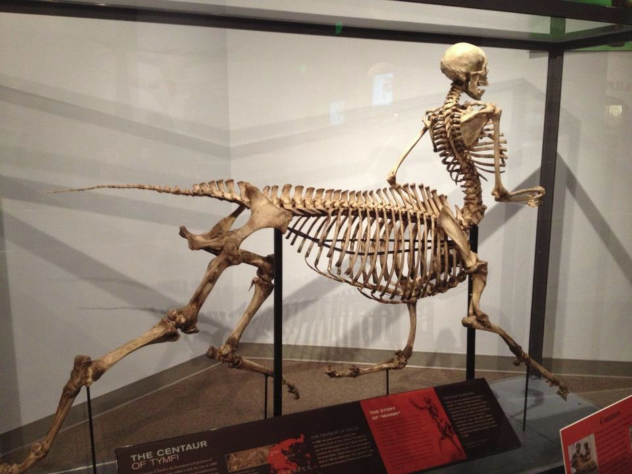 Centaurs don’t exist—except at Tucson’s International Wildlife Museum, where zoologist and sculptor Bill Willers’s skeletal sculpture is on display. Part of a collection called “Mythological Wildlife,” the statue is designed, Willers said, “to make folks think about what is real.”

The exhibits, which also include other mythological creatures, remind visitors that science was born of myths, some of which may have had a real-world basis. The cyclops might have been based on a misunderstanding of a mastodon’s remains, for example, and the Protoceratops “may have partly inspired the unicorn.” 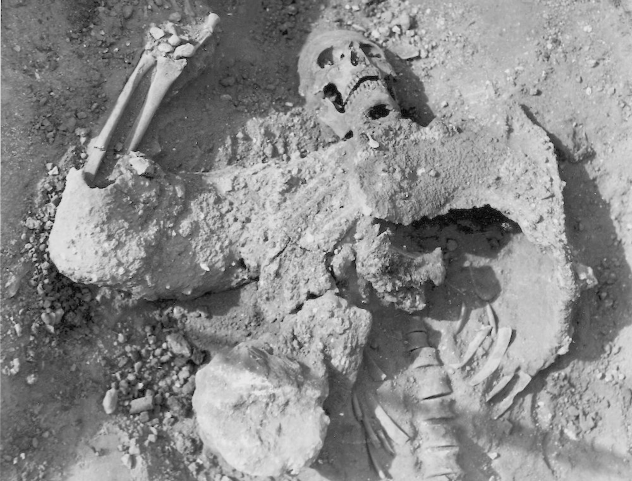 Defending Dura-Europos, an occupied Syrian city, from a Persian army seeking to undermine the city’s walls, Roman soldiers stormed a narrow tunnel. They were killed by a “noxious black smoke that turned to acid in their lungs.” One of the enemy lay nearby, perhaps killed by the “toxic underground fire” he’d started. His armor is pulled up around his chest, suggesting that he may have been trying to remove it as he lay dying.

The Romans and their adversary may comprise the oldest archaeological evidence of chemical warfare, which was practiced when the Persians attacked Dura. 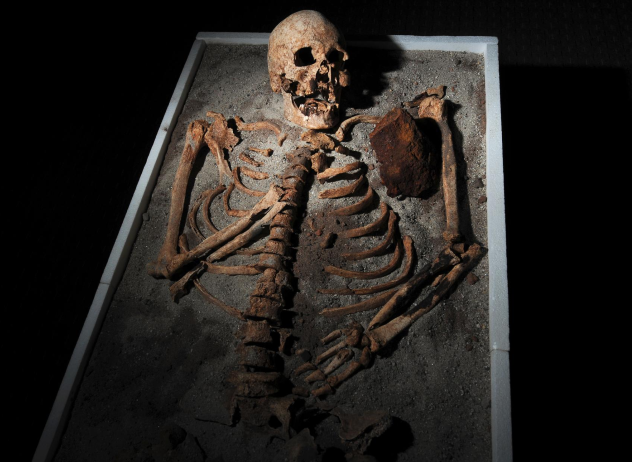 A grave was recently uncovered in Bulgaria. Inside lay a 700-year-old toothless skeleton, the iron rod that had been hammered through its chest lying beside the remains. Both the rod and the extraction of the corpse’s teeth ensured that the dead man did not rise again—as a vampire.

The grave, located in a churchyard, was framed by thick stone walls. The skeleton is yet another historical example a buried corpse being mutilated with the purpose of preventing it from rising again. 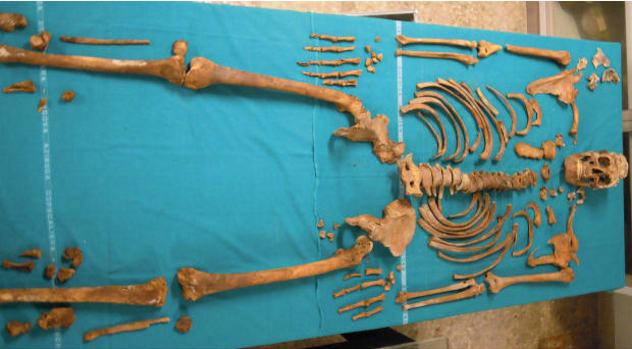 No, the skeleton itself wasn’t castrated; the man who left the bones behind, famous 19th-century mezzo-soprano Gaspare Pacchierotti (1740–1821), was. The condition of his bones show the effects that the surgical procedure had on his body. Pacchierotti was castrated before his 12th birthday to preserve his voice.

Pacchierotti’s height, 190 centimeters (6’3″), is consistent with the long leg bones typical of castrati because of the bones’ “delayed fusion,” which also affects the development of the hip bones. Castrati typically suffered from osteoporosis, as did Pacchierotti, who exhibited several fractures in his lumbar spine and low bone density in his arms and legs.

Gary Pullman lives south of Area 51, which, according to his family and friends, explains “a lot.” His 2016 urban fantasy novel, A Whole World Full of Hurt, will be published by The Wild Rose Press. An instructor at the University of Nevada, Las Vegas, he writes several blogs, one of which is Chillers and Thrillers: A Blog on the Theory and Practice of Writing Horror Fiction at http://writinghorrorfiction.blogspot.com/