When we think of drones, we still often think primarily of their military uses, despite the fact that they’re increasingly becoming a part of our everyday lives. Drones serve an impressive range of roles in the military, commercial, public, and civilian sectors. They’re also becoming more and more affordable and accessible. If you’ve been to an open-air event with a decent crowd lately, there was probably at least one person there flying their personal drone around, taking aerial footage to upload to social media.

As something becomes more common, we tend to find more creative purposes for it. And there are definitely some people out there getting creative with drones, for better or for worse. 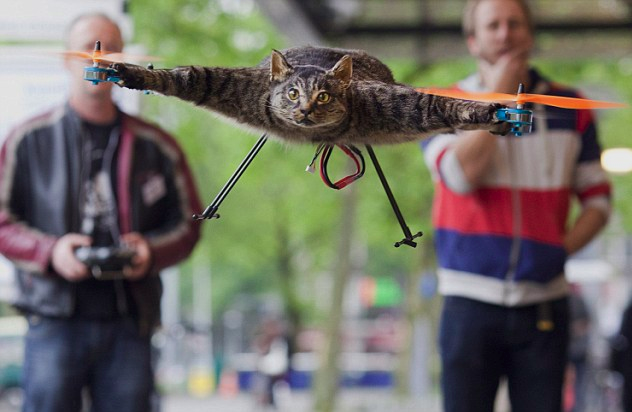 Orville the Cat died after being struck by a car in 2012. His owner, Bart Jansen, had named the cat in honor of one of the Wright brothers. When Orville passed away, Jansen decided it would be a shame to simply bury him. Jansen decided to have Orville stuffed and mounted to a drone so that the spirit of his beloved pet could take to the skies.

The “Orvillecopter,” as Jansen now refers to his former pet, attracted international attention. Not all of the attention was good; some who saw video of the late Orville flying around were outraged. Others, however, were more positive. The Orvillecopter was showcased at the KunstRai art festival in Amsterdam.

Since 2012 Jansen and his partner, technical engineer Arjen Beltman, have taken on other—bigger—projects. They created an ostrich drone in 2013 and are currently working on constructing a cow drone. Why on Earth they didn’t go with a flying pig drone is anybody’s guess.

The craze over Pokemon Go after its release in July 2016 game came with an unexpected side effect: Many people who were unaccustomed to exercise were suddenly walking all over town for hours at a time to track down Pokemon.

One player, however, decided he wasn’t going to stand for it—literally. He strapped an Android phone to a DJI Phantom drone and used a program called AirDroid to mirror the screen of the phone onto his computer. The result was that he could still sit on his butt while the drone flew around finding and catching all the Pokemon within range.

In addition, Dutch company TRNDlabs is now selling the “Pokedrone,” a handheld controller that your phone snaps into so that you can navigate a small drone around. The drone’s camera feeds into your phone on the controller, and you engage with the Pokemon by using the controller. It’s actually kind of brilliant . . . extremely lazy, but brilliant.

Flamethrower attached to a drone used to cook a turkey

In 2015, a Connecticut teenager strapped a handgun to a drone and fired the gun as the drone flew around. He wasn’t shooting at anyone, and no one was injured.

When firing a gun from a drone failed to satisfy his proclivity for invention, the teen decided to rig up a flamethrower and fasten it to the drone. It was just so he could roast a turkey, of course. What could possibly go wrong with . . . a homemade flamethrower . . . rigged to a drone . . . being flown around by a teenage boy? The really scary part: Technically, the boy didn’t break any laws. There’s no word on how the turkey turned out. 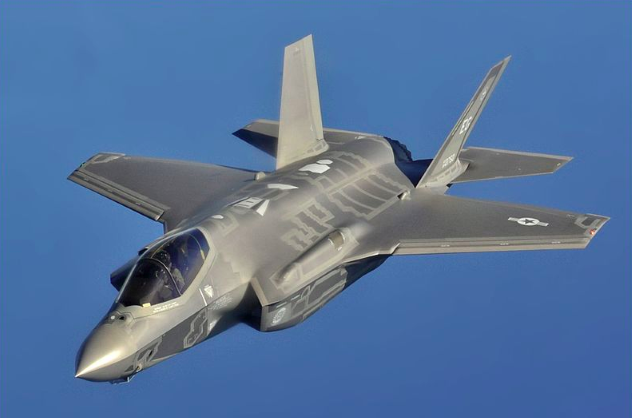 Militaries have been using drones, in one form or another, since World War II. Today, their usage has become so widespread in surveillance and combat missions that the thought of it has become commonplace. Well, the US Air Force is about to kick it up a notch.

A program currently in development would have fighter pilots controlling small fleets of nearby drone aircraft. The unmanned craft could perform a variety of functions for the pilots, from surveillance and reconnaissance to weapons delivery at dangerous or difficult to approach targets.

If you want to give yourself a headache, imagine flying a fighter jet, in combat, while simultaneously controlling several unmanned drone support aircraft around you. Maybe the Air Force should work on developing a cyborg super-pilot to fly these things first. 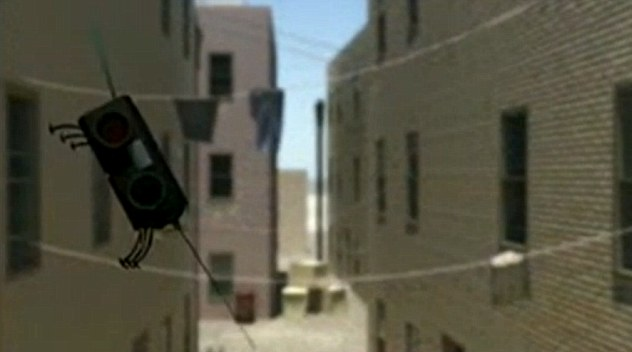 Photo credit: US Air Force via the Daily Mail

Small drones disguised as insects or birds have been around for some time. Their research and development is usually attributed to pseudo-clandestine firms like the Pentagon’s Defense Advanced Research Projects Agency (DARPA), an organization responsible for devices every bit as zany (but lethally effective) as something out of a James Bond film.

Micro drones are usually harmless, as they’re used primarily for surveillance and reconnaissance, but they’re about to get a whole lot deadlier. When the Air Force rolled out its 20-year flight plan for small, unmanned aerial systems earlier this year, it included a proposal for what it dubbed “swarming.” According to Col. Brandon “BB” Baker, chief of the Air Force’s remotely piloted aircraft (RPA) capabilities division, “Swarming technology changes the game for future warfare.”

The swarms could be organized to attack a single major target or be spread out over a large area to engage multiple targets. While larger and more expensive weapons platforms like Predator drones can be taken down with a single hit, a swarm could suffer several losses but still regroup and be effective, a capability the Air Force referred to as “self-healing.”

5 Drone Racing Could Be The Next Big Sport

July 2016 saw 100 student drone pilots participating in the inaugural Liberty Cup. What is the Liberty Cup, you ask? It’s only the northeast qualifier for the US National Drone Racing Championships.

The students were required to research and build their own drones, which supporters see as a natural and beneficial extension of the STEM (science, technology, engineering, and math) curriculum taught in public schools. The student pilots wore “First Person View” goggles that let them experience the twists and turns of the racetrack as they operated their drones from remote controls. That actually sounds pretty awesome. 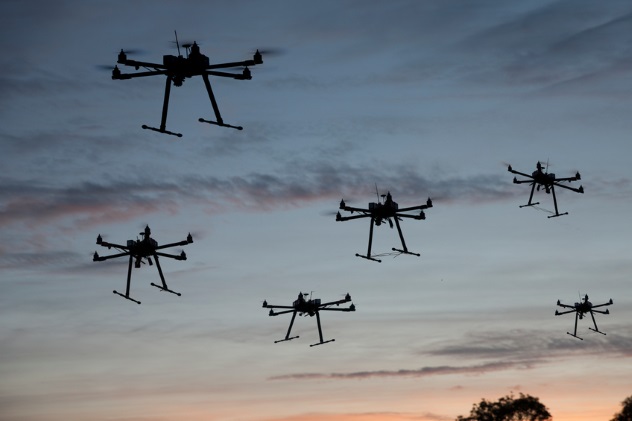 Typically, as an industry grows, so do the number of rules and regulations governing it. Apparently, that’s not the case with drones.

The FAA recently moved to relax regulations for flying drones. The less stringent rules, which go into effect in August, are expected to have the greatest impact on farmers and ranchers, who use drones to survey crops and look for lost cattle. The Association for Unmanned Vehicle Systems estimates that such uses could end up accounting for up to 80 percent of all drone use. Were they taking the Pokedrone into account when they made those calculations?

3 The Anti-Drone Bazooka . . . For Civilians 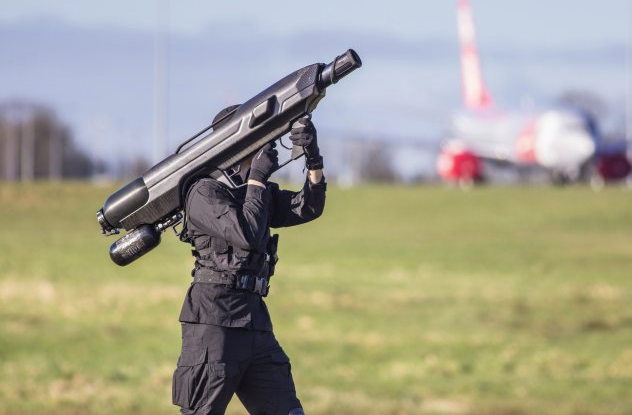 Don’t let all these drones buzzing around overhead make you anxious. The good folks over at SkyWall have you covered with the SkyWall 100 Drone Defense System.

The SkyWall 100 looks like a bazooka . . . sort of. But it’s not really bazooka. It’s more like an oversized air rifle that shoots a net to a distance of up to 100 meters (330 ft). That’s not going to be much help against a Predator intent on taking you out with a Hellfire missile, but it’s a considerable threat to many of the small drones that hobbyists use.

SkyWall claims that drones are safely parachuted to the ground once ensnared in the projectile net. Let’s hope so. It may be a legal gray area, but it seems like if you damage someone else’s drone by sending it crashing to the ground in tangle of mesh, you might be liable for the costs. 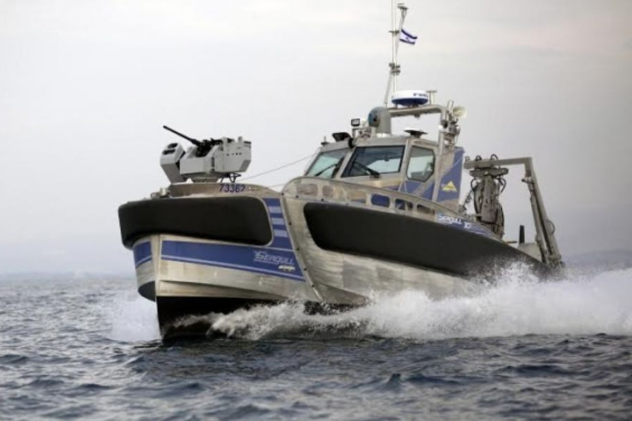 In February 2016, Israel-based defense company Elbit unveiled a new unmanned boat named the Seagull. The Seagull’s primary function is mine detection and neutralization, and it can handle every step of the process from start to finish. But get this: Part of the way it detects underwater mines is by sending little underwater submarine drones out to look for them. That’s right, it’s a drone boat operating a bunch of its own cute little drone submarines . . . that blow things up.

Militaries and private firms in several countries are also experimenting with the idea of drone ships. The US Navy conducted an exercise in late 2014 in which remote operators controlled 13 boats at once from a single command console. Granted, the boats were primarily small craft operating in Virginia’s James River, but that’s still pretty impressive. At the rate technology is developing, it’s not too big of a leap to imagine drone battleships in the not-too-distant future. 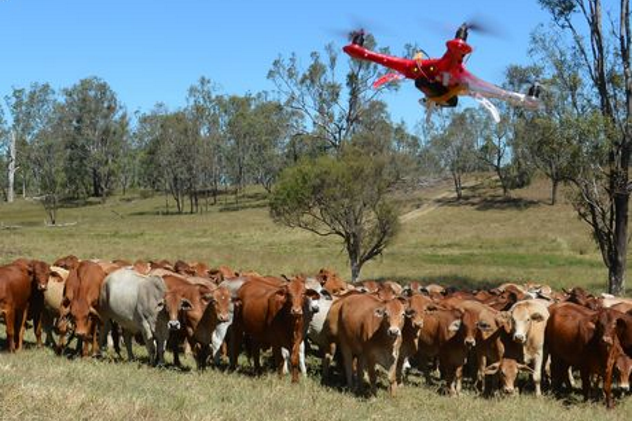 Photo via The Queensland Times

As previously mentioned, ranchers are increasingly relying on drones to help find lost cattle, but they’re also starting to use them to help bring the lost cattle home. Professor John Church, a specialist in cattle research at Thompson Rivers University in British Columbia, Canada, says he has used drones “like a flying border collie” to herd cattle. Church doesn’t prefer that method, though. He prefers that the cattle remain oblivious to the drones monitoring them from above. That’s a growing trend.

Researchers with the National Oceanic and Atmospheric Administration (NOAA) have started using drones to count the calves in dolphin and whale pods around the Hawaiian islands without disturbing the animals. Drones present an immense opportunity for studying animals in their natural habitat in a noninvasive manner.

Darien Cavanaugh is a contributor to War is Boring, Offiziere, and Reverb Press. His work has also been published by The National Interest, RealClearDefense, The Week, and the Center for Security Studies, among others. He’s an editor at The Frank Martin Review and The Progressive Standard. You can find him on Facebook and Twitter @DarienCavanaugh.